Fortnite Sliding Mechanic - How To Use Chapter 3 Season 1 of Fortnite brought a lot of new features to the game including Victory Crowns, new quests and new locations. But one of the biggest new additions introduced to the game is the sliding mechanic.

The new Fortnite sliding mechanic allows you to pick up speed by sliding when going downhill. To make the new feature even better, while sliding, you still have the ability to shoot and build. 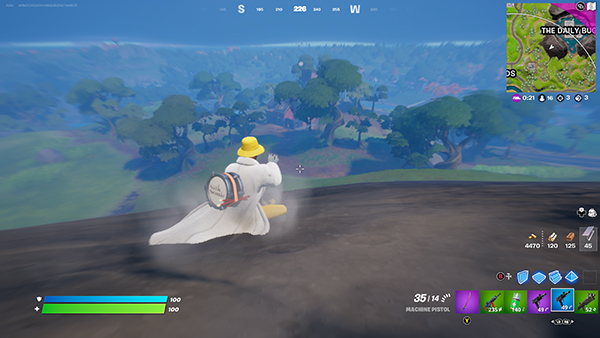 The crater-like terrain at The Daily Bugle is a great place to slide downhill and travel fast.

To begin sliding, just hold the crouch button while running. On flat terrain, you'll slide for a little bit, but won't accelerate much more than running. If you're going down a hill or mountainside you'll pick up speed and slide all the way to the bottom and then some.

When to use the Fortnite Sliding Mechanic

The sliding mechanic is useful in a lot of gameplay situations and has the ability to completely change combat and mobility in Fortnite. But knowing how and when to use the sliding mechanic to get the most out of it is key to mastering this new skill.

Possibly one of the most obvious ways that the Fortnite sliding mechanic is useful is when you're trying to outrun the storm.

If you're in an area with a lot of hills and high peaks, you can use the sliding mechanic to pick up speed traveling downhill. You'll go a lot faster and get a lot farther if you slide instead of running.

Luckily, the new Chapter 3 map is really catered to the new sliding mechanic and offers a lot of areas with high ground, peaks and valleys to slide in and out of. 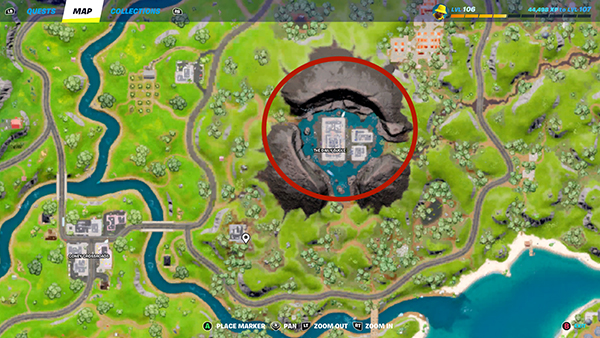 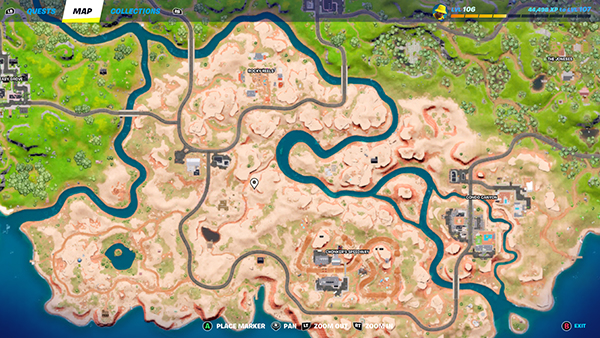 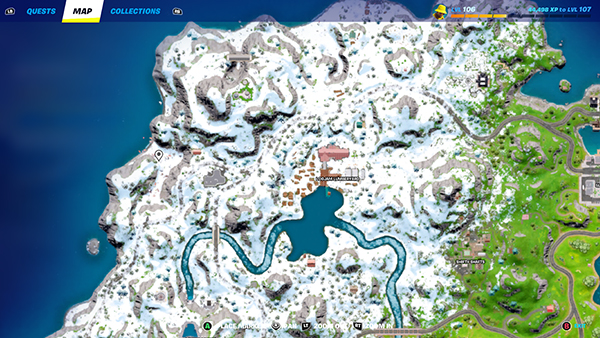 Examples of places to go on the map that have a lot of high areas and slopes to slide down.

There's also tricks to use to get more speed out of your slides. For example, when sliding, cancel your slide just before you start to slow down and jump, then go back into a slide. This can help you keep up your momentum.

You can also pick up speed when you slide after using a glider. So when you first land in the game, if you use the sliding mechanic as soon as you land, you'll pick up some incredible speed. This can be useful if you mess up your drop and don't land exactly where you wanted to.

Similarly, you can use the glider to sliding technique when using a launchpad. As soon as you land, start sliding to get some extra distance.

If you run across an enemy and you don't have a good loadout for combat or you're low on health, sliding away from the fight is your new best option. Especially if there aren't any vehicles around or rifts to jump in, using the sliding mechanic will allow you to make a quick getaway.

The sliding mechanic also shrinks your hit box, similar to crouching, and can help to minimize damage from enemy fire while trying to get away. It can also make it harder for snipers to hit you and deal heavy damage from a distance.

But the sliding mechanic isn't just useful for getting away from enemies. You can also use it to surprise enemies in combat. 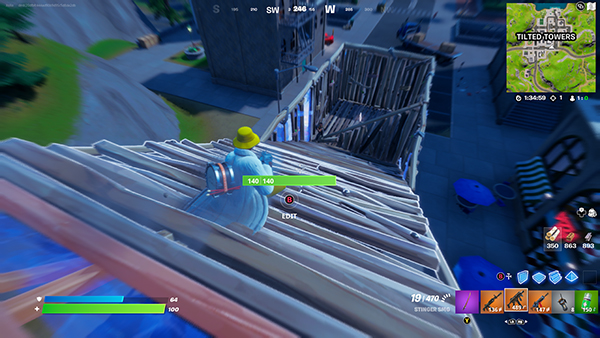 In Battle Lab, you can spawn enemy bots and practice sliding while building and in combat.

Sliding into combat can get you to the center of the action quickly and catch your enemy off guard. You can also shoot while you're sliding, which allows you to fire several shots quickly while your hit box is small, making it hard for enemies to defend themselves and deal damage to you.

Since the sliding mechanic increases the speed of your player and combat, it's crucial to work on your aim in order to hit your shots on enemies when you're sliding at such an accelerated speed. This is something you can practice in Creative Mode, or just by more gameplay in Battle Royale.

A lot of Fortnite streamers and YouTubers recommend altering your controller settings in order to make your building and editing abilities while sliding more efficient. Simply go into your settings, navigate to 'controller options' and change your slide hold time to 0.1.

Reducing your slide hold time makes it easier to slide at a moment's notice, making your movements even quicker. 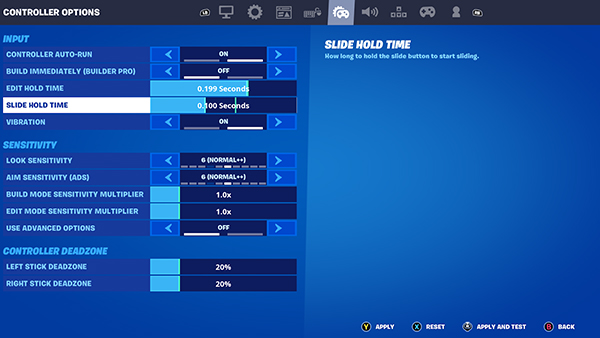 How to adjust your slide hold time in controller options.

This guide provides information on how to adjust your mouse buttons for keyboard mouse players, as well as buttons for controller players.

If you slide in a straight line on flat terrain, you won't go any faster than you would if you were running. But in Build Mode, ramps and cones can give you a slope to slide down and pick up speed.

In build fights, using the sliding mechanic throughout your builds by placing cones and ramps will make it harder for enemies to hit you than if you were just running and jumping around your builds.

While sliding, you can also shoot down enemy builds. For example, if you're sliding toward an enemy structure in a box fight, you can shoot down their wall and slide right into their build.

Similarly, the sliding mechanic can also be used in build fights to slide through doors. If an enemy built a structure with a door, you can quickly slide right into it and attack. This is a great move for surprising your enemies with quick, unpredictable moves.

The best way to master the sliding mechanic in build fights is by practicing. You can go into Creative Mode or Battle Lab and free build to practice sliding around your builds and testing different techniques. 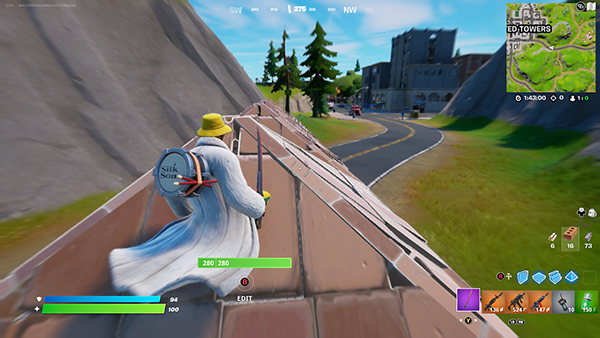 While you won't pick up significant momentum, you can also slide on cones.

Getting the Most Out of the Sliding Mechanic

Since you still have the ability to shoot while sliding - and it's such a valuable tool to use when in combat - it's important to know the best weapons to use to get the most out of the sliding mechanic. Some of the new weapons in Chapter 3 Season 1 pack quite the punch and are perfect for sliding attacks.

Pistols are often underestimated in Battle Royale, but they can deal high damage at medium range and high headshot damage at close range.

Sidearm Pistols certainly aren't the best weapon in game, but they're good in a pinch and can deal some decent damage if aimed accurately.

The hit box on the Striker is much smaller than other shotguns, which means it can deal more damage so long as you aim well. This makes it a great weapon to use to get a high damage shot on an enemy when you're sliding into combat or an enemy's box in a build fight.

The only drawback of the Striker Pump Shotgun is its slow reload time. Because of this, it's good to have other hard-hitting weapons in your loadout to switch to so you can avoid taking damage while waiting on the Striker to reload.

The Auto Shotgun doesn't deal as much damage as the Striker, but because it's an automatic, its higher fire rate makes it a useful gun for sliding.

The Auto Shotgun doesn't offer much range, but if you're sliding into combat it can be good for spamming enemies, especially for newer players who are working on their aim since it has a larger hit box.

Arguably one of the best new weapons added to Fortnite in Chapter 3 Season 1 is the Stinger SMG. It deals high damage to enemies and builds and also works well at medium range. Even with just a common level SMG, it deals significant damage and is a must-have item in any Battle Royale loadout.

When sliding, the Stinger SMG is perfect because you can spray enemies. So not only are you moving faster, but you're also firing more shots per second, making it harder for enemies to keep up with you.

It can be especially useful if you have two SMGs in your inventory to switch between without having to wait to reload. You can slide into an enemies box during a build fight and deal high damage that will be extremely difficult to counter.

Get Your Fortnite Slide On

Ultimately, Fortnite's new sliding mechanic is a great addition to gameplay to make your movements unpredictable, boost your travel speed - especially when going downhill - and it also adds a new layer to combat. 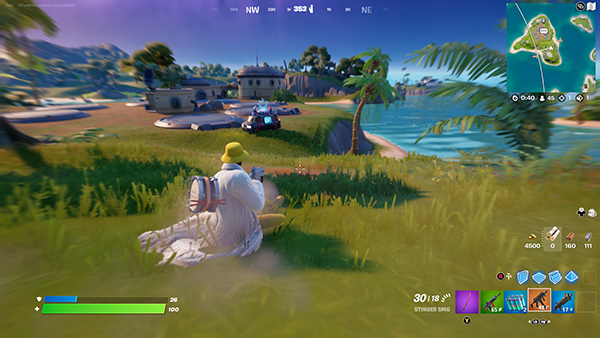 The new Fortnite sliding mechanic is a useful new feature in the game that allows you to pick up speed traveling down hills and mountainsides.

With the new sliding mechanic, there's certainly a skill gap and it can take some time to master sliding and adjust your gameplay settings and strategy to a point that allows you to truly maximize this new feature.

Practicing in Creative Mode, or going all out in Battle Royale is the best way to learn the new mechanic and improve your skill set. You can also check what the pros in the Fortnite Competitive Subreddit community are doing in game for tips on improving your sliding strategy.