MapleStory Legion is a character progression system that gives you stat bonuses and benefits for leveling up all the different types of classes of MapleStory. Every single level on any character can now contribute to your Legion; the benefits are given to all characters in your world, making it easier to start new mains and boost your existing ones. This guide will look at how the Legion system works, the Legion Member Bonuses and how you can earn Legion Coins for the Legion Shop.

Legion is a progression system that every serious MapleStory player should work on. The stat benefits are amazing and can really boost your character into the next tier of progression.

The general idea behind how the Legion System works in MapleStory is that every character on your account counts towards your Legion and can be used to pass on bonuses to other characters. Because MapleStory has over 40 different jobs and classes, the Legion system makes it a benefit for trying out all the different characters, allowing progress to be shared amongst them. 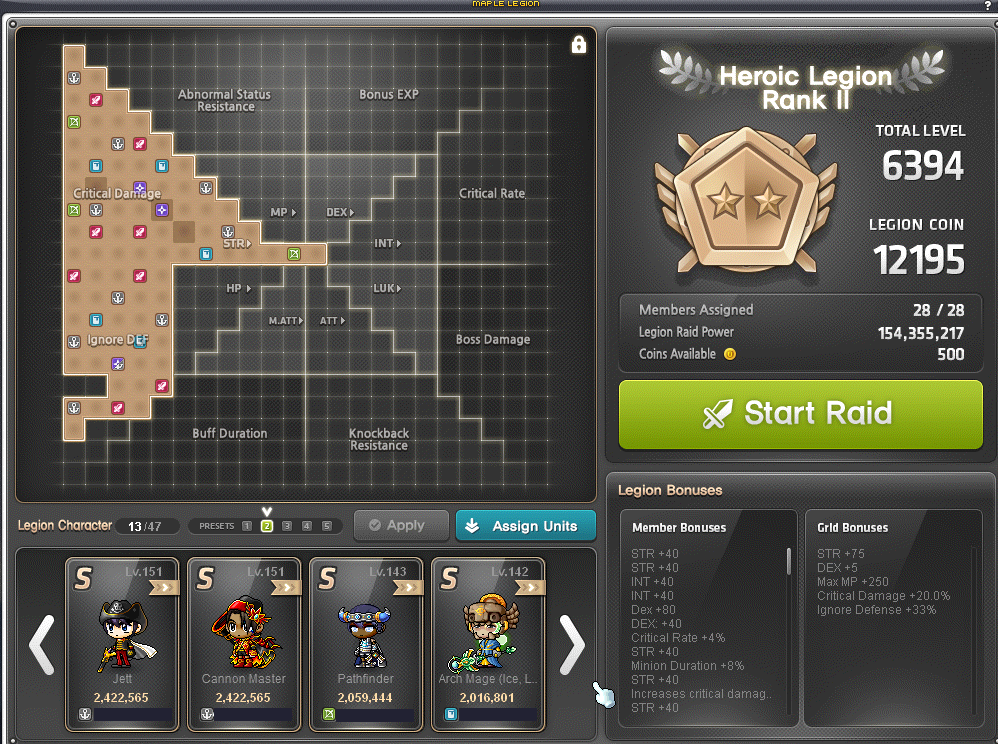 The Legion system unlocks as soon as you have accumulated 500 levels between all the characters on your account. You can access it from the Main Menu in any town map; upon loading up the Legion UI you'll be presented with a grid system that you can customize to your liking.

Every character that is above level 60 will count towards your Legion Level. 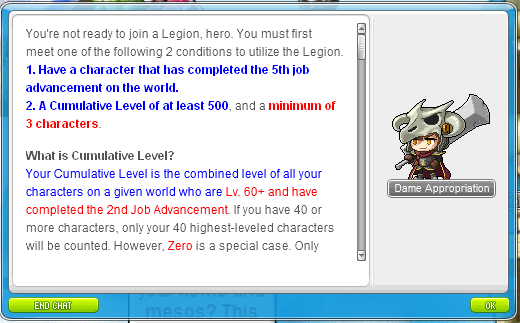 Each character is represented by a block on the Legion Grid. You can only place a limited number of character blocks on your grid based on your Legion Rank. In the first rank, you can place up to 9 characters to your grid.

A player will add their first block to the center of the grid and from there they can go in any direction but the blocks must be connected together.

When you place a block on the grid you gain stat bonuses from the Legion Grid, as well as a job-specific bonus that each character block gives. The higher the level a character is, the bigger their block is and the more stat bonuses you'll gain.

Many players will first get their characters to S rank (Level 140) because it is one of the most logical stopping points. It allows players to get the Level 2 Link Skill for that character and leveling becomes a lot slower between level 140 and 200. In today's MapleStory, many players can get to level 140 in a couple of hours.

Your character's block shape is determined by it's rank and job-type. You can use the table below to see all the different block shapes.

As well as earning stat bonuses, players will also earn Legion Coins passively. Every character that you assign to your Legion Grid will add towards your total Legion Power.

Legion Power is affected by the character's level and the amount of Starforce a character has (Starforce is another upgrade system for equipment). Your characters will be constantly battling a giant dragon (which you don't need to participate in); each time they deal 100 billion damage, you'll earn a Legion Coin.

The more characters you have assigned to your grid and the more stronger they are, the more Legion Coins you'll earn. See our Legion Coins section for more details.

Your Legion Rank is based on the total amount of levels of all your characters.

You'll start your Legion at rankÂ Nameless Legion Rank I as soon as you hit 500 accumulative levels. You'll be able to sign a max of 9 characters to your grid.

As soon as you reach the next threshold of total levels, you can increase your Legion Rank by paying Legion Coins and talking to Dame Appropiation NPC in most major towns.

The table below shows you all the Legion Ranks available.

Each block on the Legion Grid gives a specific stat bonus. Some stat bonuses are only available once you have increased your Legion Rank.

A character can take up to 5 blocks a character rank SSS (Level 250). Below are the following grid bonuses:

As well as earning a Legion Grid Bonus, you also gain a member bonus based on the type of class you are adding to your your Legion Grid.

Below is a table of all the bonuses and the character rank for each bonus. 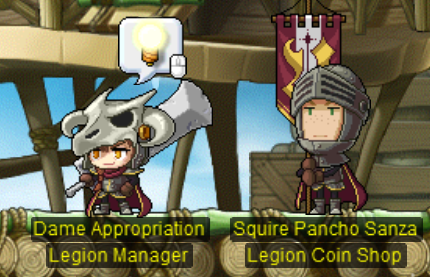 Legion Coins are a currency that you can earn by increasing the power of your Legion. Known as Legion Power, it is the total sum of all your character levels and their corresponding Star Force Power.

You can view the Legion Power for each character underneath their character card in the grid. 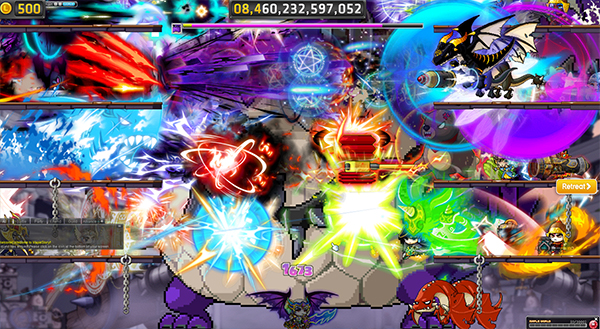 Your Legion Power is then used to take down a giant Dragon Boss in the Legion Raid, which you can manually enter to help out (there isn't much point to doing this apart from collecting your saved Legion Coins and doing your Daily Legion Quests). All your characters in your account will automatically attack the Dragon for you to earn you coins.

At first your coins are stored passively in your Legion and must be collected by entering the Legion Raid. You can only store a finite amount of Legion Coins in your Legion; once you hit the limit, you won't earn anymore coins until you collect them. Legion Coins are shared across all characters once collected so no need to transfer them.

You can also earn Legion Coins by completing two daily quests from Dame Appropriation. These quests can be completed in the Legion Raid.

Depending on whether you play Regular or Reboot World, the items in the Coin Shop will vary slightly. 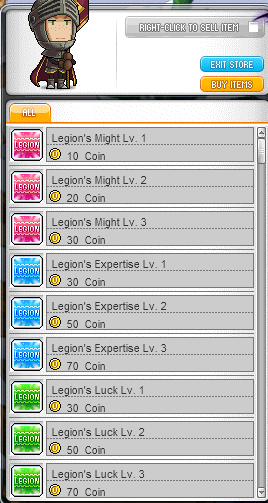 Maple Lab World was introduced in August 2018 as a new world that players could create characters in. This world was a limited-time world and had the following restrictions:

You can see the patch notes here.

The legion blocks you earned were sent to your main server for your main characters to use. They have the following stats: