Ursus The Mighty is a unique boss in MapleStory that allows up to 18 players to fight him at a time, also known as a Raid boss. This boss is very popular to defeat in Reboot Worlds as you can earn plenty of mesos each time you defeat him. At special times of the day, the amount of mesos you earn from Ursus is also doubled, making him a boss you want to add to your dailies.

How Does Ursus Boss Work

To be able to participate in the Ursus Boss Battle, you need to be at least level 100. Once you've hit level 100, look for the quest in your Quest Notification icon called: (Lv. 100) [Ursus] Rumors of The Mighty.

Completing this quest then will allow you to teleport to the Ursus waiting room, which can be accessed from the Dimensional Mirror in any major town.

In the waiting room you can gather with your party to take down the boss. Ursus can have up to 18 players challenge him at any one time, but you can also take him on with a smaller party if you have enough damage to defeat him.

Ursus can be defeated 3 times a day per account.

To start the fight, players can either use the Party Play or Quick Start option. Party Play allows you to create your own party and invite specific players. Quick Start allows anyone to join the fight, and it waits until 18 players have all signed up before starting the fight.

There are several restrictions in the Ursus boss fight that makes it different to most other MapleStory bosses. You are restricted to only 4th job skills and only a select few can be taken in with you.

Your equipment stats and potential are ignored for the fight. Instead, your damage is based on Total Star Force, Weapon Level, Legion, Ability Points, Arcane Symbol Stats, Hyper Stats and Inner Ability.

You have a max of 20 potions per life in Ursus, and there is a max of 80 revives for the whole team. Once you die in Ursus, you won't be able to do anything unless another player revives you.

When a player dies, they can be revived by other party members who hover over their body and hold space. If a player recieves any damage during this time, the revive is cancelled. Thieves can use Dark Sight to dodge Meteors.

Ursus The Mighty uses MapleStory's new 2-D Skeletal Engine and so the boss looks a little different to some of the older bosses in the game. When you first enter Ursus, you should start casting all your buffs as they are shared with other party members too.

When you attack Ursus's legs enough time, Ursus will fall to the ground and become unresponsive. At this point, all players should jump onto Ursus and start dealing damage. Any player who is on the floor near Ursus will get instantly killed when he wakes up. Players on top of Ursus are flung into the air.

When Ursus's HP reaches less than 10%, he goes into a frenzy and damages all players near him, knocking them back constantly until he is killed. Meteors will also spawn at a much higher rate, making it very difficult to dodge them.

If all players die before Ursus is defeated, players will still get rewards based on how well they contributed to the fight in terms of damage, reviving players and healing.

Players are rewarded based on their contribution to the Ursus boss fight. This includes the amount of damage dealt, the amount of heals and also the amount of revives. All of these contribute towards a grade/rank given at the end of the fight. The higher the rank, the more mesos and EXP you'll gain. Grades go from E to SSS.

In Reboot Worlds, if you manage to take down Ursus, the most common rank players get is an S rank. You only need to contribute a small amount of damage to get this rank. During Ursus Golden Time, mesos are doubled and an S rank can net you around 30,000,000 mesos per run. With 3 runs available per day, that's 90mil a day. Most guilds will run Ursus every day for the easy mesos since the boss fight can last less than a couple of minutes. Look out for Smegas that try to recruit for Party Play runs if you don't have an active guild.

Updated (Patch V220): The following changes were made to Mesos distribution from Ursus

Meso Distribution Amount for characters below Lv. 200 will be changed. 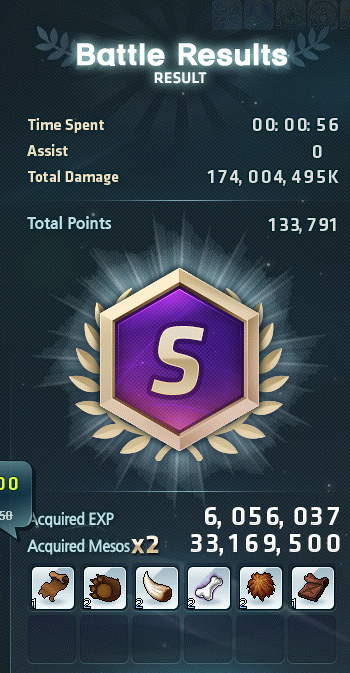 Players will also recieve materials for fighting Ursus. These materials can be traded in for items in the Ursus shop. In order to obtain specific materials, you need to do specific actions in the Ursus fight. See the table below.

When you defeat Ursus, there is also a chance to be rewarded with an Ursus Soul Shard. 10 Soul Shards can be combined to make an Ursus Soul Weapon that can be attached to your weapon.

Finally, by defeating and participating in the Ursus The Mighty battle, you can earn medals to equip to your character. See the table below:

During a certain period of the day, the rewards from Ursus are doubled for mesos and EXP. This time happens every day at the same time. Players in game will get a notification telling them when golden time is activated.

The actual time that Golden Time happens for Ursus is:

Fighting Ursus during this 12 hour period will give double the rewards, so it's best to organize your group to fight during this window.

As of Patch 216, Ursus Golden Time has change to two hour slot windows. These are the new times:

Here are all the items you can get from the Ursus Shop by trading in materials. 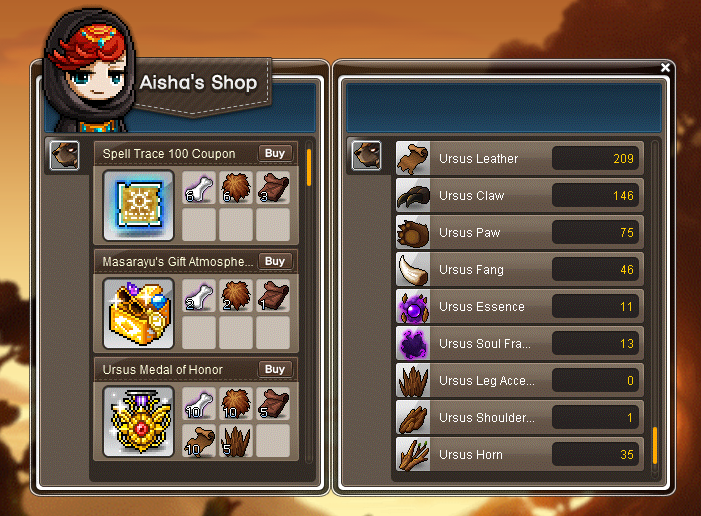