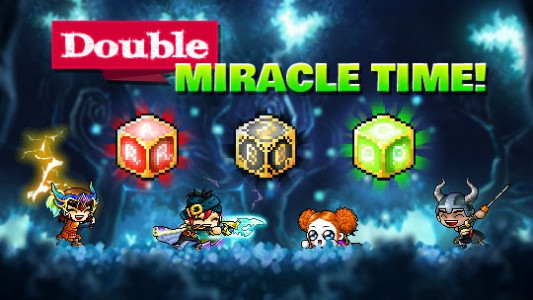 Miracle Time is an exciting event in MapleStory that happens only a few times a year. It's a chance for players to get their equips to legendary with much higher rates than they normally would through miracle cubes. Many players save up their mesos and NX in preparation for Double Miracle Time events as they can be predicted as to when the next one is going to happen.

What Is Double Miracle Time?

Double Miracle Time is a one hour event that doubles the tier-up rates of miracle cubes. The event usually happens during the course of a weekend and has three separate sessions lasting one hour each. There is also a chance for your items to tier up twice with one cube, meaning you could jump from Epic to Legendary in one cube.

Double Miracle Time also usually includes a cube sale in the CashShop. This means you get more cubes for your money and when using them in the event, have a much higher chance of tiering up your items.

This is why Double Miracle Time Events are so popular- it's the most cost-efficient way of getting good gear.

Double Miracle Time only affects CashShop cubes such as:

It does not affect Master Craftsman Cubes or Occult Cubes.

The table below shows the tier up chance of using Red and Black Cubes (approximately).

When is the next Double Miracle Time Event?

Double Miracle Time Events happen around 2-3 times a year. Unfortunately, they are not announced very far in advanced. Usually they are announced just 3 days before they are to occur, so it can be tricky to save up for the event.

However, the DMT events usually occur during the same time each year. Looking at past DMT events, we can use those dates to predict when the next one will be.

Based on the past events above, the next DMT should be sometime in December.

What are the best cubes to use during DMT?

If we believe that the tier-up rate of Black Cubes is roughly 2x the amount of Red Cubes, then it is more cost effective to use Black Cubes to tier up during the event.