Elite monsters and Elite Bosses appear in maps you hunt in MapleStory and if you defeat them you'll be rewarded with a bonus round of rare items. This guide will show you all the different types of Elite Bosses and Mobs you can come across, as well as rewards you can earn whilst playing.

Elite Bosses were introduced in patch v.150 Rising Heroes: Elite and has since gone through a few upgrades and changes.

When training in most MapleStory maps, there is a rare chance to spawn an Elite Monster whilst defeating other normal monsters. This Elite Monster is usually in the form of a regular mob, only it's size is doubled and it's HP is increased dramatically.

It doesn't matter if you've killed all 20 Elite Monsters or only 1, once the map's Elite Monster Counter hits 20, the Elite Boss will spawn.

There are several different types of Elite Bosses, all with their own skillset. Defeating an Elite Boss will invoke the Bonus Round, which allows you to get extra drops and items. The Elite Boss will also drop rare items upon defeat.

Upon defeating an Elite Monster, a message will appear on your screen. This can be used to get an estimate of how many Elite Monsters have been defeated in a map. Remember, that for every 20 Elite Monsters defeated, the next Elite to spawn will be a boss.

When you see the You feel something in the dark energy, you know that within the next 5 Elite Monsters a boss will spawn.

They also have a rare chance to drop:

When an Elite Monster, or Elite Boss spawns, it can also have a prefix attached to it that will determine it's special effect move. Below is a list of all prefixes: 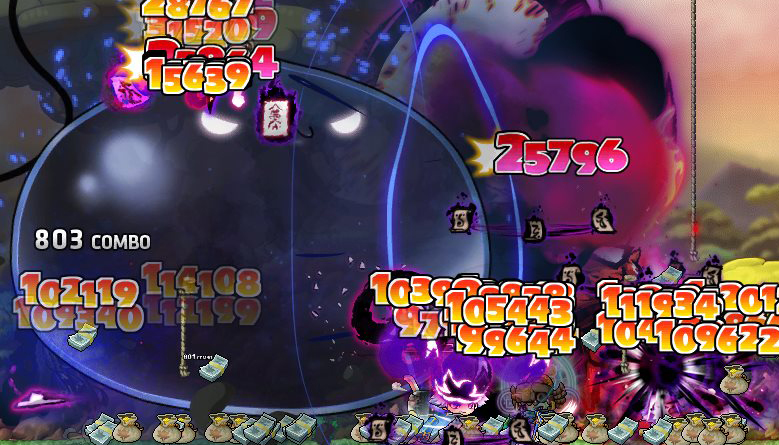 Once 20 Elite Monsters have been defeated, an Elite Boss will spawn the next time an Elite Monster is supposed to spawn. During this Elite Boss phase, the map will go dark and all other mobs will be removed from the map.

Update: As of version V.214, Elite Bosses only spawn on maps with mobs level greater than 140+.

The first 30 seconds after an Elite Boss has spawned, it is immune to damage.

When you defeat an Elite Boss, up to 2 Treasure Chests will drop that you can open in your Inventory for rewards. It will also activate the bonus round, where you can try to get more rewards. A max total of 6 players can be rewarded with Treasure Chests, based on damage dealt.

Treasure Chests expire after 10 minutes, so make sure to open them!

UPDATE: As of version 233, the Bonus Round has been removed. Instead an EXP Orb will drop instead.

The bonus round can be one of three rounds.

When you defeat an Elite Boss, it will drop one or two Treasure Chests depending on how much damage you dealt to the boss. The user who deals the most damage gets 2 Treasure Chests.