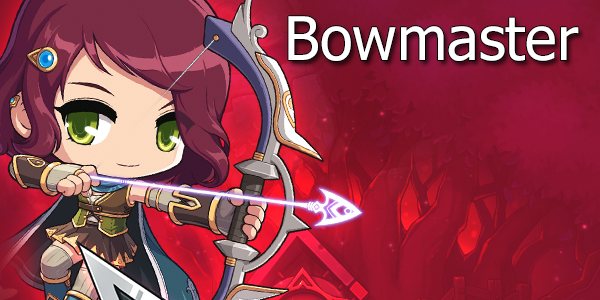 Bowmaster is one of two Explorer Archer jobs that can be chosen from in MapleStory and are a part of the original classes added to MapleStory when it was first released. There is a third Explorer Archer called Pathfinder, but it must be created separately from the character creation menu, unlike Bowmaster which uses the Job Advancement system. Bowmasters use arrows to take down their enemies, with a flurry of useful skills to help them deal lots of damage to bosses and mobs.

As an Explorer class, Bowmaster is an original class with a simple setup. It doesn't require complex mechanics to use and their skills aren't the most flashiest either (due to being so old!). The last update to Bowmaster came in the Red update, where they were revamped to try and bring them more in-line with other classes. That update was in 2013, and since then Bowmaster's could do with some tweaking to make them viable for 2020+.

When training with Bowmaster you get some useful skills that can help cover entire maps. The problem is that your main mobbing skill Arrow Stream has limited vertical range which makes it sometimes hard to clear maps. Arrow Platter is very good if you can one-shot mobs with it and in some small maps you barely have to move. When you move into 5th job, you get another cooldown skill called Arrow Rain that really helps with mobbing in larger maps.

As a bossing class, Bowmaster sits somewhere in the middle. They provide decent party buffs in Sharp Eyes, and can deal damage from range positions to keep out of harms way. They lack an i-frame, so dodging one-shot against bosses can prove difficult. Their DPS isn't the greatest, and sits pretty low on the all-time DPS charts, however they can continue to do damage when a boss moves out of range for melee classes, allowing them to do more consistent damage over time.

The other option for Archers is Marksman.

As an Archer you'll get lots of critical damage and critical rate. Your main mobbing skill in first job is Arrow Bow, which is pretty decent for a first job skill. Max double jump as soon as possible to help with mobility and training faster.

Arrow Bomb is your new mobbing skill. You'll rarely use Covering Fire, so max that last. You want to get your Bow Booster skill for faster attacks, so get the required Bow Mastery to 5 points to unlock the skill. You'll also get a skill called Quiver Cartridge which you can adjust to your needs. I recommend using the Magic Arrow mode for a 30% chance to deal an extra hit.

You get a new attacking skill in Arrow Blaster, which is unusual to most skills. You can actually place the Arrow Blaster using the NPC chat key so that it acts as a stationary turret to attack mobs for you. Combine Arrow Platter and Flame Surge and you're doing some decent mobbing damage. Phoenix is your summon- not the most useful of summons but it's extra damage. The rest of the skills will boost your damage passively.

You can max all skills in fourth job. Follow this build:

Arrow Stream is your mobbing skill, hitting up to 8 lines of damage on enemies. Hurricane is your single-target attacking skill, but you won't need it until you start facing bosses later down the line. Sharp Eyes and Maple Warrior are all good buffs to get early on, Enchanted Quiver will boost your Magic Arrows and not consume any for a short period. Binding Shot will increase the damage of your Arrow Platter, but the skill itself isn't very useful.