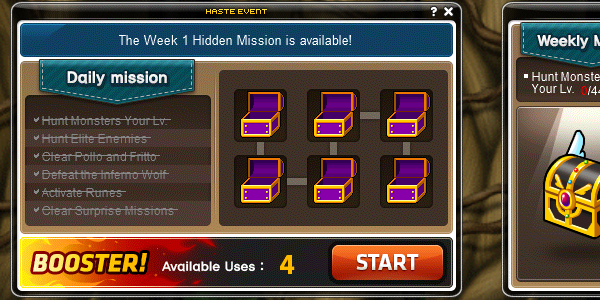 The Haste Event, or sometimes known as the Hasty Hunting Event is a reoccurring event in MapleStory that gives players an incentive to defeat over 80,000 mobs in a 2 week period. The event usually appears once a year in various MapleStory Updates, with new additions and changes being made to the event. The latest iteration is Haste Plus, which is now adding more rewards for players who love to grind!

The Haste Event is broken up into 2 weeks; each week there is a Hidden Mission that is unlocked once you complete all the daily missions available. This Hidden Mission usually requires you to kill an absurd amount of mobs for that week. The latest event required players to kill 44,444 mobs within 7 days!

The rewards for the Haste Event are usually worth it, especially if you're planning on training your characters. As part of the event, the following effects are added:

As mentioned, the Haste Event comes round at least once a year. Sometimes they may add new benefits for players as they look to grind out the 44k mobs!

The bonuses above give you a great incentive to start training. Lower level characters will benefit hugely from the Pollo and Fritto mini-games, whilst higher level players will enjoy the Rune boosts, especially if they have the Evan Link Skill that gives 70% more rune up time at max level.

Each day you will have the option of completing Daily Missions. In the past, there have been up to 9 daily missions, but during the recent Haste Plus event in patch 217, this has been reduced to 6 missions.

The daily missions are as follows:

The Hidden Mission usually requires you to defeat an obscene amount of mobs. The last haste event required players to defeat 44,444 mobs per week.

For high-level players, this usually doesn't take too long (around 2-3 hours depending on kill rate) but for lower level players this might seem pretty tough!

Completing the Hidden Mission gives you a weekly reward. During the event, there are two Hidden Missions; if both are completed you'll be reward with a special title that boosts your damage considerably. The stats only last for one month- but the boost is worth it. The stats are usually:

If you fail to complete any of the Hidden Missions, you won't be able to receive the stat title. You can still get that week's Hidden Mission rewards though.

Sometimes the most difficult part of the Haste Event is unlocking the Hidden Mission. To do that, you have to complete all available Daily Missions. Here are some tips for doing so:

Killing mobs is what this event is all about. You'll want to pick a map and location in which you are one-shotting the mobs within your level. This means the mob's level must be within 20 levels of your own, otherwise it won't count towards the quest. Most high-level players will be training at their normal locations in Arcane River, due to the fact that training at higher levels takes hours and hours anyways.

By defeating mobs faster and faster, you'll also be able to activate the following faster:

If you're struggling to defeat the 20 Elite Mobs, there are some ways you can boost the count up. An Elite Mob will spawn once every 3-5 minutes after you killed the last one; however you can also spawn 3 Elite Mobs by using a Rune Of Darkness.

You can also find 2 extra Elite Mobs when looking for Elite Boss monsters.

Elite Champions do not count towards Elite Mob counts unfortunately.

Surprise missions are random missions that appear whilst logged into MapleStory. It doesn't matter if you're killing the mobs or AFK, the mission will pop-up and give you 30 minutes to complete it. In previous Haste Events, it was required to complete at least 3 per day- this meant some players had to be online for hours and hours waiting for the Surprise Missions to pop up. Fortunately, the most recent Haste Event only required 1 Surprise Mission to be completed.

During the Haste Event, Runes get a massive boost and are great for EXP. You can further boost the event by using Evan's Link Skill, which increases the duration of Runes, meaning you'll get that sweet 200% EXP for longer!