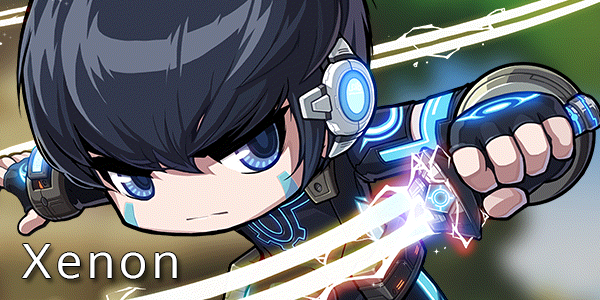 Xenon is a Resistance Class in MapleStory that has the unique characteristic of benefiting from three main-stats, being able to equip both Pirate and Thief gear and the ability to change it's main attacking skill on the fly. Xenon was taken by the Black Wings and modified to become a Cyborg humanoid and now he must find out who he truly is on his MapleStory Adventure. If you're looking to main Xenon, this skill build guide will show you the right skills to upgrade and the stats to increase.

Xenon was released in GMS Version 138 for the Unleashed: Xenon update. As part of the Resistance Class set, he shares his Cash Shop inventory with Battle Mage, Wild Hunter, Mechanic, Xenon, Blaster, Demon Slayer and Demon Avenger characters. Xenon is a unique class in that it benefits from STR, DEX and LUK stats and can equip both Pirate and Thief equipment types. Xenon uses a special energy gauge to charge it's attack. Xenon has it's own unique weapon called a Whip Blade.

Xenon is an excellent mobbing class and great for training. Since it's main attacking skills can switch modes, it allows you to train in many different maps efficiently as your skills can be adapted to each one. In Fourth Job, Xenon will have a fast arsenal of attacking options and you won't struggle to clear entire maps, making training super fast. Xenon has great mobility too, allowing it to get around maps with both double jump skills and diagonal teleport skills. Xenon does have a lot of buff skills it needs to setup, which can be annoying if you disconnect or die.

Xenon really shines in bossing when it can implement it's burst abilities. It has many short-duration burst skills and short-duration buff skills that it is able to deal a large amount of damage over a short period of time. When it's waiting for burst skills to reset, Xenon's DPS becomes below-average and so players need to prioritize getting their bursts available. Micromanaging all the skills can be a pain, but once Xenon gets to late/end game, their burst is super effective at taking down bosses.

First job Xenon main attack is called Beam Spline. You'll want to get Propulsion Burst maxed early on as it's a Double Jump skill, allowing you to get around faster. After that, you should max Circuit Surge, which is a buff skill that uses 3 Energy Points. Pinpoint Salvo is a toggle skill that'll attack mobs around you, but likely the damage isn't strong enough to do anything significant to mobs at your level.

In second job, Xenon gets its first attack that can shift to different modes called Quicksilver. It has three modes: Concentrate, Flash and Takeoff. Each attack is slightly different, but generally you'll probably prefer using the Flash skill as it is a fast-attacking move.

Get your Attack Speed Booster upgraded ASAP (Xenon Booster) and then add all the extra new passive buffs you get from Perspective Shift, Structural Integrity and Pinpoint Salvo Redesign A. Ion Thrust is a pretty useless knockback skill.

In third job, you get a new weapon shift ability called Combat Switch. The three modes are Air Whip, Explosion and Fission. You'll probably find Air Whip the most useful, with Explosion being good for horizontal, flat maps.

Manifest Projector is basically like Night Lord's Shadow Partner and so you'll want to max this quite early on; a combination of raising the skill level of the main attacking skill and this is a good idea.

Diagonal Chase is a great mobility skill that can get you around large maps; Hybrid Defenses and Gravity Pillar are quite useless for regular training.

Fourth job introduces several new skills you can utilize. Mecha Purge (bombard, snipe, Bombardiment) is a shift skill that you can alter for bossing and mobbing depending on the situation. You'll find Mecha Purge is your better mobbing skill since you can use it whilst jumping around than Beam Dance, so max Beam Dance last.

Hypogram Field allows you to summon different fields; Force Field, Penetrate, Support. Force Field and Penetrate are similar; they are basically a summon you can place down to damage enemies that are within the area. Purple is the best field to go with when training.

OOPArts Code can be used when you have max energy to increase your final damage and boss damage for a short duration.