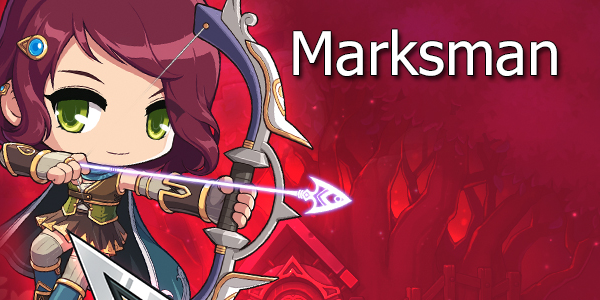 Marksman is a 4th job Explorer Archer class that has a focus on range and single-shot attacks to deal heavy-hitting damage to enemies. Marksman is part of the original MapleStory classes, and has gone through a few updates to make it the class it is today. As an Explorer Archer, it shares many skills with it's Bowmaster counterpart, including party buffs such as Sharp Eyes.

Explorer Classes were given a huge makeover in the MapleStory Red update and many classes were changed from what they looked like during the pre-bigbang era. Marksman was one of these classes and now plays quite differently to how it used to. That being said, the differences between Marksman and Bowmaster are subtle.

As a Marksman, your distance from mobs matters. The skill Rangefinder effects how much damage you do at close and far range depending on the mode you're in. Marksman have decent map mobility, with a double jump and Hookshot skill allowing you to climb to platforms far away.

The main difference between Marksman and Bowmaster is their 4th job attacking skills. Marksman use Snipe to fire single arrows at targets that deal heavy damage. They are not auto-targeted, so making sure you hit mobs is all part of learning how to play Marksman. Their 4th job can be quite clunky to play, but when you get to 5th job you unlock Split Shot skill, which makes Marksman a really good mobber. The only issue with this 5th job skill is that is has a 50% uptime.

In terms of bossing, Marksman don't have the best DPS. Many prefer Bowmaster over Marksman for true end-game bosses, but they still can hit pretty hard.

As an Archer you'll get lots of critical damage and critical rate. Your main mobbing skill in first job is Arrow Bow, which is pretty decent for a first job skill. Max double jump as soon as possible to help with mobility and training faster.

Iron Arrow is your main attacking skill in second job. It doesn't auto-target, so you need to be accurate with your shots otherwise the arrow will just fly over your opponent's heads. Get Crossbow Booster as soon as possible to make your slow attacking that much more bearable. Net Toss isn't very useful; the rest are damage boosting.

You'll also get a skill called Rangefinder, which increases your Final Damage the further you are away from mobs.

Third job is a bit of struggle. Explosive Bolt and Dragons Breath are both very slow attacking skills, even with Crossbow Booster. You'll have to bear with these attacking skills until 4th job. Frostprey is your summon that can help with mobs around you. Hookshot is great for teleporting around maps that are big with lots of platforms.

Finally, a decent mobbing skill. Piercing Arrow is really fast and good at mobbing early on. It still doesn't auto-target, but it can hit up to 6 enemies at once and deals decent damage. Snipe is your bossing skill, but it's on a 30 second cooldown so you will be using this with Piercing Arrow until you unlock the Hyper Skill Snipe - Cooldown Cutter which gets rid of the 30 second cooldown. You get a decent buff in Sharp Eyes, that's also useful to party members. Arrow Illusion can be good for pooling monsters together in large maps.

Marksman's Nodes should include: