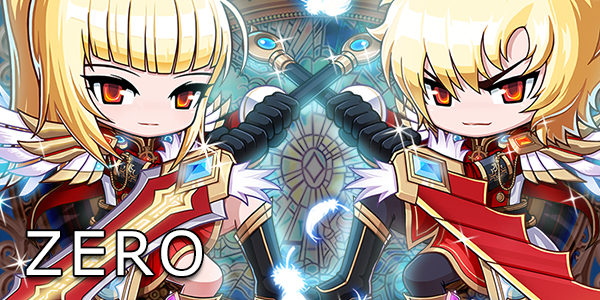 MapleStory Zero is a unique class that allows you to play two characters at the same time. Introducing Alpha and Beta, players can switch between characters on the fly to increase their damage as they battle mobs across Maple world. Zero also comes with a great Legion block that gives up to 10% extra EXP, so the class is well worth training up to give you benefits for your other MapleStory characters.

Zero has a unique playstyle compared to most classes in the sense that you are playing two characters at once. Alpha and Beta make up Zero's split personality, and using different skills activates either one of the characters. You gain additional benefits from swapping between the two characters during battle, including stacked buff damage and extra attacks.

The class is a time-limited one; meaning you can only create Zero during a specific event period. This is usually around major MapleStory updates, such as Winter and Summer. Zero can also now be created in Reboot World as of patch 219.

Zero also starts at level 100 (instead of the usual level 1!). In order to create a Zero, you need at least 1 level 100+ character already created.

Training a Zero is a very interesting character due to it's tag ability. Zero uses a rotation of multiple skills to maximize damage; you get great map coverage with teleportation skills, however, newer players may struggle to properly work out which skills to use. Zero gains a stackable damage buff each time you tag between Alpha and Beta characters, meaning, it's in your best interest to use the skill types of both characters.

As a bosser Zero gets some very useful skills that make them a good end-game bosser. They come equipped with several Iframes that have reducible cooldowns, including one that allows you to be immune for 15 seconds. In terms of damage, Zero has some unique property that make it useful when it comes to scaling up damage. For one thing, their weapon stats are automatically transferred across, including potential and star-force.

Zero does not go through any Job Advancement like other MapleStory classes. Instead, you level up the skills for Alpha and Beta characters. You gain SP for each level as normal, with many skills having a level requirement before you can upgrade them. You can max all skills for Zero before you get to level 200, so don't worry too much about following this skill build.

You automatically obtain these skills when you reach their required level. Zero does not have Hyper Skills.

We don't add points to Shadow Strike as the teleportation can mess up your ability to combo. It also is bad for bossing since it pushes you forward uncontrollably (however, this is being changed in an update in the future, so you max this when the change happens in future updates).

In your early levels, you'll be using Moon Strike to spam attack. Using Moon Strike twice will use the combo skill Piercing Thrust. Next you'll want to save your SP so we can easily max out Flash Assault, which comes at level 110 (it does have a cooldown, however, using the Tag system you can reduce it very quickly). Add one point to Time Generator for help with recovering Time Force.

Rolling Cross is great for mobility; getting to those higher platforms whilst doing lots of damage to mobs is great. It gets even better when using Rolling Assault and Grand Rolling Cross. Reinforce Body is a passive that greatly increases your Critical Rate (amongst other buffs).

Wind Cutter and Wind Striker are your best mobbing skills in the game. Wind Cutter creates tornados and Wind Striker sends them on their way to deal damage to surrounding mobs. Wind Cutter has a 15 second cooldown, so you need to use the Tag system to reduce it. When you get access to Storm Break at level 150, this skill gets even better.

Divine Leer is a great passive also that increases your final damage.

Beta uses slow and heavy-hitting skills compared to Alpha. You'll start off with using Rising Slash, which combos to use Air Raid and Air Riot. Max your passive skill Heavy Sword Mastery at the beginning for that extra damage boost.

At level 105, you gain Flash Cut. Throwing Weapon adds additional damage (by throwing your weapon at the enemy) but we have better combos than this skill so we max it later (despite it being available at level 110). Instead, Solid Body is your passive skill that gives you 100% Knockback Resistance.

Spin Driver comes at 115 but it needs Wheel Wind at 125 to be decent. It gets even better with Advanced Wheel Wind, but it's not as good as other skills so we max it last. Armor Split is your level 130 passive, that ignores mob defense for 10 sec.

Giga Crash , Falling Star and Earth Break combine to be a 3-hitting damage skill. You get Advanced Earth Break at level 170 which adds some damage over time with lightning.

Immune Barrier has a 25% chance to make you immune to damage; it's great for bossing but at 25% chance it's not something you'd want to rely on. And probably one of the best skills for Beta is the Critical Bind skill. It allows you to bind bosses for 5 seconds (with a 35 second cooldown); giving you 20% critical damage and extra 30% critical rate when Alpha then attacks.

Using Both Alpha and Beta

The key to Zero is using both characters to reduce the cooldown of their skills and stack damage buffs. For example, Wind Cutter has a 15 second cooldown; however using Moon Strike reduces the cooldown by around 3 seconds. Sticking with just Alpha however will negate your Doubletime transcendent skill, which stacks damage each time you switch between Alpha and Beta for up to 22 seconds.

It takes a bit of getting used to and keyboard layout is crucial. Newer players will find using the basic skills for Alpha and Beta (Moon Strike and Rising Slash) to combine well for quick damage; as you get used to these you'll want to throw in Wind Cutter for it's great mobbing ability.

Zero's Nodes should include: