Pokemon GO: How to catch Celebi - A Ripple In Time A Ripple In Time is a Special Research quest that players of Pokemon GO can undertake in order to capture the legendary Pokemon Celebi. Every player gets access to this special research and can complete it at their own pace as it doesn't disappear! The special research involves 8 different tasks that will take varying amounts of time. At the end, a guranteed capture of Celebi will be available.

Celebi is the 251st Pokemon introduced in the 2nd generation of Pokemon Games for the Johto region. Celebi is of the type Psychic and Grass, which makes it a perfect counter against Fighting, Water, Electric and Ground types. Celebi is especially weak to Bug type Pokemon.

Celebi is also the star of it's own movie called Pokemon 4Ever: Celebi - Voice of the Forest.

In Pokemon GO, Celebi was originally released on August 2018 as a special research reward called A Ripple In Time. Whilst there is also a rare chance for Celebi to appear Shiny in this research, there was also a limited-time special research to catch a 100% shiny Celebi.

A Ripple In Time

A Ripple In Time becomes available once you have completed the third task in Mew's A Mythical Discovery special research task. Before starting this Special Research, it's a good idea to take a look at all the available tasks. Some tasks require preparation, and you can work on them simultaneously to help speed up your progress. 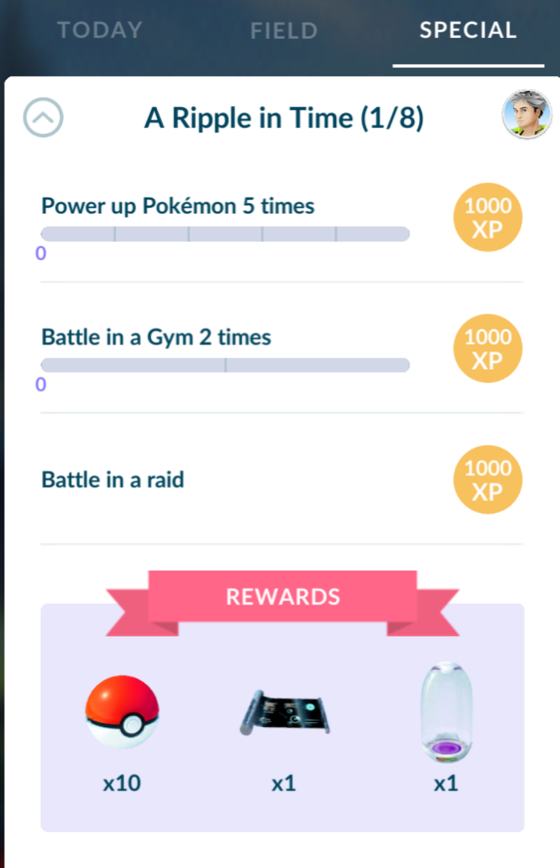 A nice easy set of tasks to complete. Battling in a raid doesn't require you to win either; you can find some 1 star raids and use your free daily raid pass to complete this task. 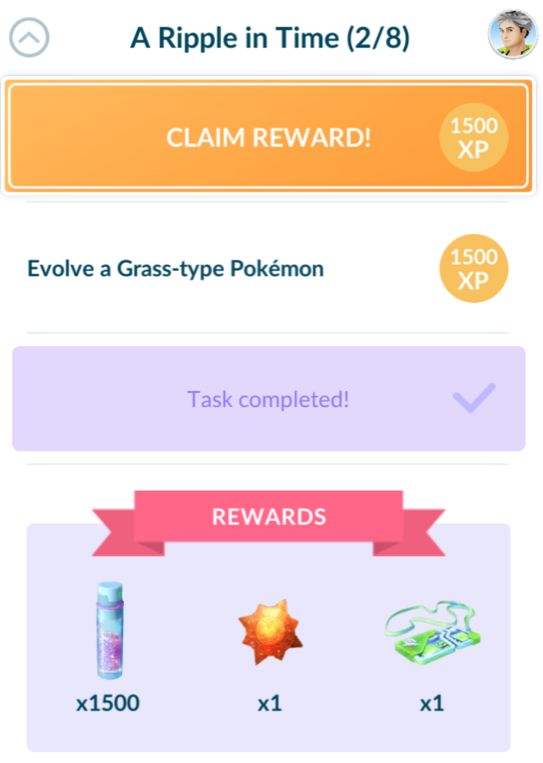 If you don't see any grass Pokemon spawning around you, try searching through your collected Pokemon to see if any need evolving and are of Grass type. You can search for the word "evolve" and it will list all Pokemon you have that can evolve. Finding 3 new friends can be tricky for isolated players- however, there is a subreddit where Pokemon Go players can add friends easily. 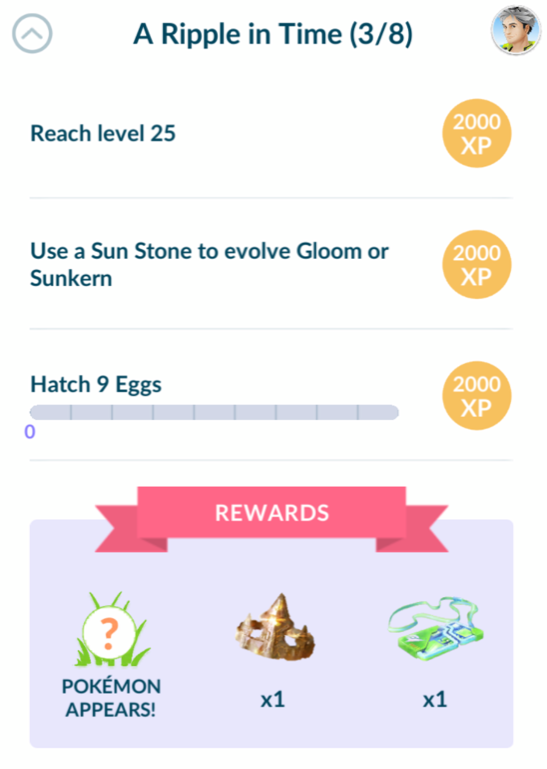 As you can see, the Special Research tasks are starting to get longer and longer. Of course, some of these tasks you might finish instantly if you're already level 25. But finding a Gloom or Sunkern can take months if their spawn is not in rotation. Hatching 9 Eggs should be easy enough; just make sure to incubate those 2KM eggs for finishing this task.

You can use the Eevee from the previous research task to walk as your buddy. Once you hit the 10KM limit, you can then evolve Eevee into Espeon during the day (it will evolve automatically into Espeon after walking 10KM). Alternatively, you can also rename your Eevee to Sakura to evolve it into Espeon. Sending 20 gifts to friends can be a bit slow since you can only send 1 gift per day per friend- but the more friends you have the better.

This set of tasks is very much like the previous set, instead you need to evolve your walked Eevee at night time to ensure it turns in Umbreon. Alternatively, you can rename your Eevee Tamao to guarantee it evolves into Umbreon. Trade A Pokemon might be difficult if you don't have a friend nearby- your only other option is to have two devices and have another account to trade with.

The toughest part of this research is probably the use items to evolve Pokemon twice. By completing these research tasks, you should have been rewarded a few of these evolve items already: Sun Stone, King's Crown, Metal Coat. These all can be used to evolve specific Pokemon. If you've used them up already, you can still obtain other copies from Pokestops.

The last bit of research needed to be completed before you encounter Celebi! The toughest part of this is earning the Johto Gold Medal, which requires collecting 70 Johto Region Pokemon. There is only a 100 different Johto Pokemon, so this can be particularly tricky to complete, especially if the current spawns are favouring different regions. Getting an Excellent Curveball Throw can be tough if you're trying it on small-hitbox Pokemon. The easiest Pokemon to get Excellent Curveball Throws tend to be the largest Pokemon, like Snorlax, Electrabuzz, Onix, Chansey and more.

You don't have to do anything for task 8 apart from collect  your free XP and rewards. Congratulations on capturing the legendary Pokemon Celebi!