Brilliant Stars has now been released and here are the best cards to pull from this exciting 200+ card set!

Brilliant Stars includes the return of the Trainer Gallery cards, which is a subset of cards included in the main set. These cards feature trainers with Pokemon, including V, VMAX and other Ultra Rare cards.

Brilliant Stars is the first set of 2022 to be released and the ninth edition of the Sword and Shield series, over 3 months after Fusion Strike was released. The long wait has hopefully wet your appetite for more shiny cardboard and we've compiled a list of the best cards from Brilliant Stars that you'll want to look out for. 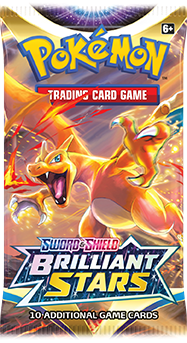 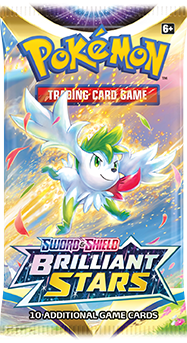 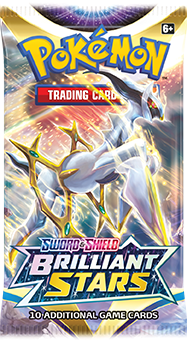 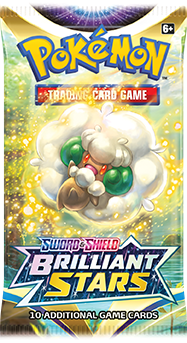 And now, without further ado, the best cards from Brilliant Stars to pull are ...

Let us know in the comments which cards would make your top 10 list of best cards from Brilliant Stars! 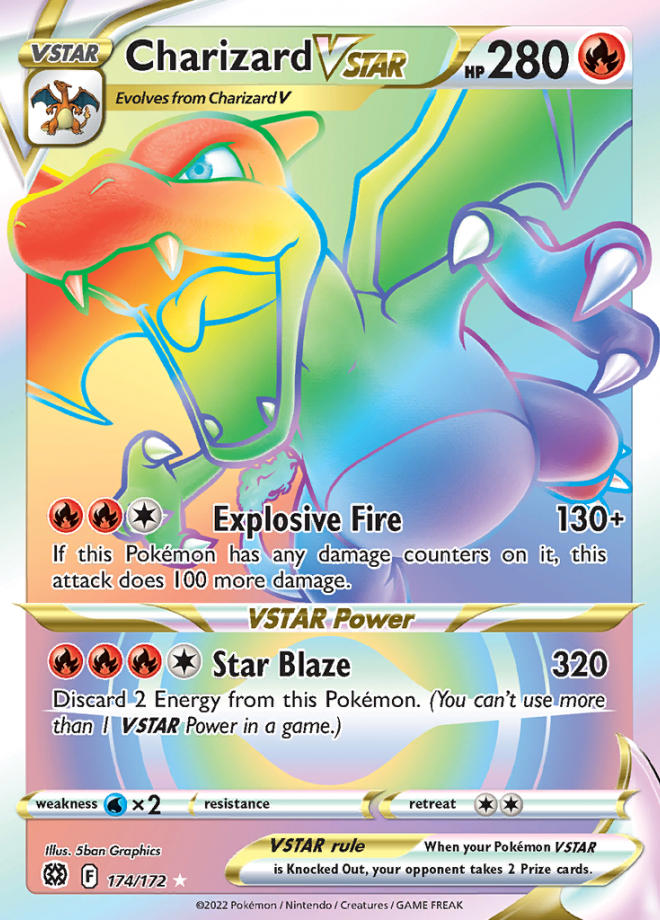 Rainbow Rares are always some of the best pulls in Pokemon TCG modern sets, but with the addition of VSTAR, this makes getting them even sweeter. And what better Pokemon to star the list off with other than Charizard? This Rainbow Rare Charizard VSTAR is one of five different Charizards you can pick up in Brilliant Stars and I have a feeling you might see the other versions in this list...

Currently priced at around $300, this is one of the most expensive cards to come out of Pokemon sets since the Rainbow Rare Pikachu in Vivid Voltage. It is early days, so expect the price to drop from that but early indications suggest this will be one to watch. 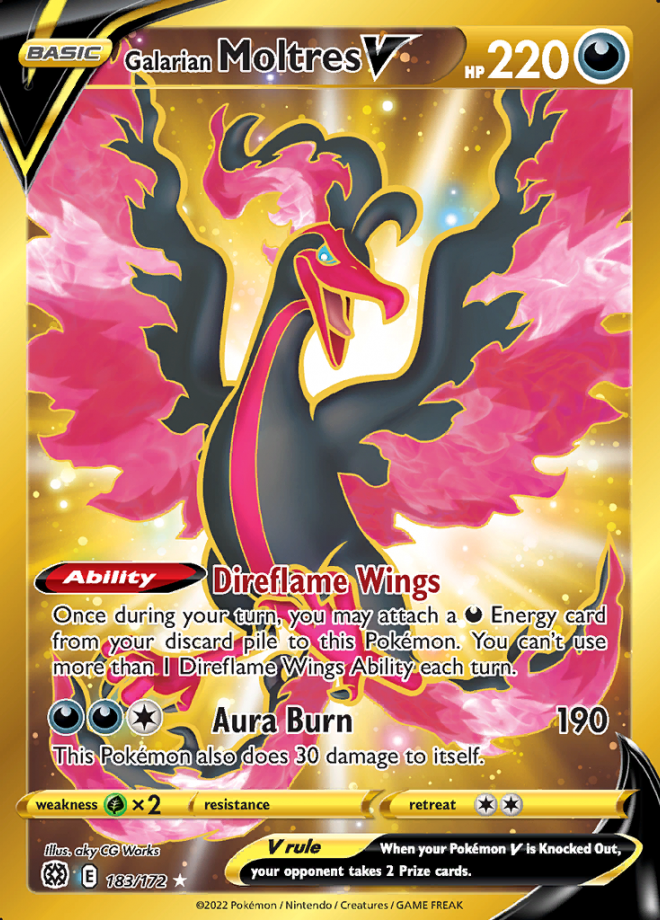 Ever since the legendary birds made their Galarian debut in Chilling Reign, we've been hoping for other variations to pop up. Brilliant Stars does not disappoint, with new Gold Secret Rare Galarian Moltres V. This card has one of the toughest pull rates in Brilliant Stars and the $50 price it is currently fetching reflects that. You can get all the Galarian birds in Gold in the Brilliant Stars set list, so pick your favourite and getting ripping open those booster packs. 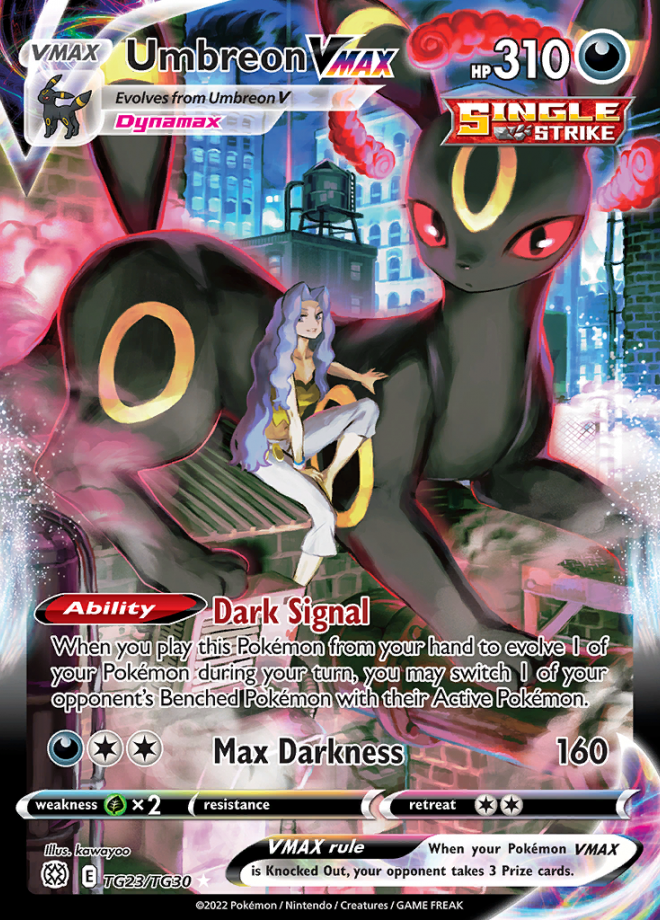 The Eevee evolutions may have been recently featured heavily in the Evolving Skies set, but this new Team Gallery Umbreon VMAX will surely still be a hit with fans of the series. There are lots of Eevees featured in the Team Gallery subset but like Evolving Skies, Umbreon is usually the most requested card that comes out on top.

There are a number of VSTAR Pokemon we could have chosen to be put in this list as the new golden-white look is amazing. We went with Arceus VSTAR, as it's the god of all Pokemon. Like Charizard, there is also an even rarer Rainbow Rare Arceus VSTAR and Golden VSTAR card for you to collect as well.

VSTAR is the new rarity type included in Brilliant Stars and also a new mechanic for players to use during the TCG. You might find when opening boosters of Brilliant Stars that your energy cards are replaced with VSTAR marker cards- these are used to power up your VSTAR Pokemon. 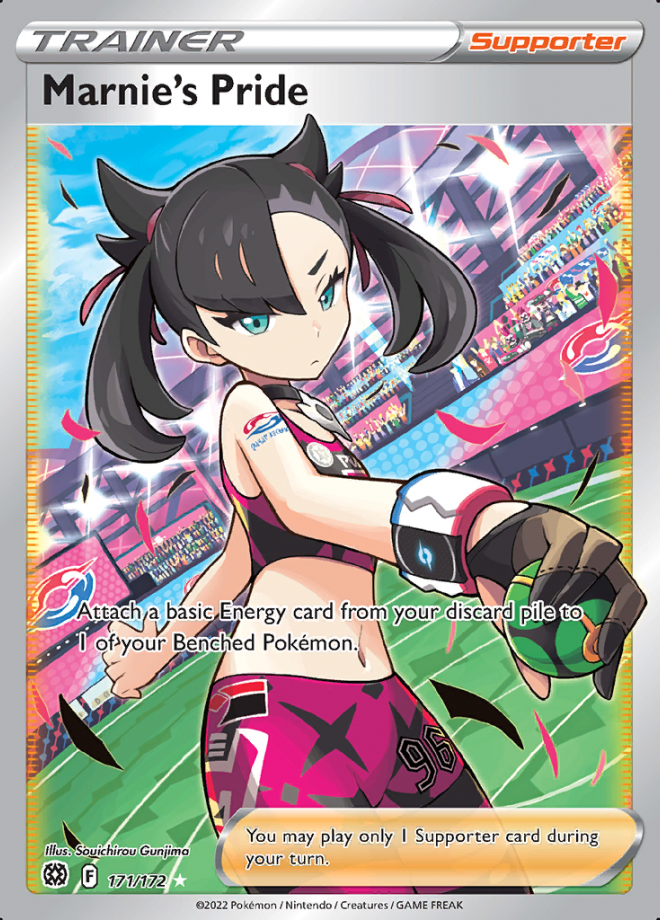 Marnie makes an appearance in Brilliant Stars as a full-art Ultra Rare trainer card. Marnie was recently featured in a unique PokÃ©mon TCG: Marnie Premium Tournament Collection and those sold out incredibly fast. Brilliant Stars is likely to be more available for the average collector, so hopefully this is your time to get your hands on an ultra rare Marnie card!

Marnie comes from the Galar region and is one of the rivals you face in Pokemon Sword and Shields series. 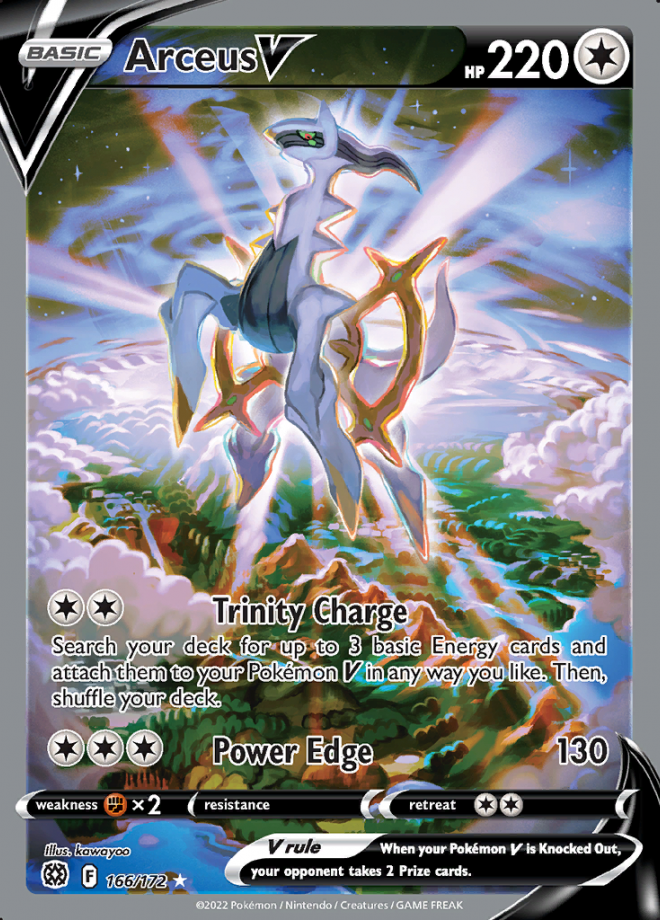 The incredibly rare alternative-art Arceus V also makes our best cards to pull from Brilliant Stars. Currently hitting highs of $100, this alternative art will likely be one of the harder cards to pull in the Ultra Rare category. 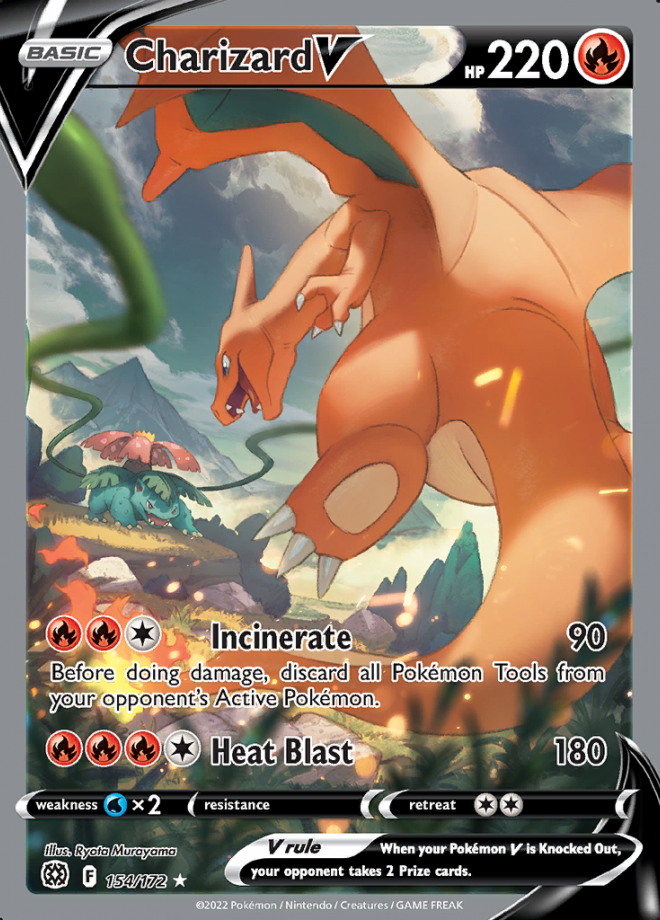 This is the last Charizard we'll feature in this list, but the other ones could easily make it. Charizard is by far the most popular Pokemon in the TCG series, mostly due to the fact that the original base set Charizard can sell for over $300,000 in mint condition! This alternative art Charizard is hitting around $150 on early markets, so it will be interesting to see where it ends up when the set slowly starts to get more openings. 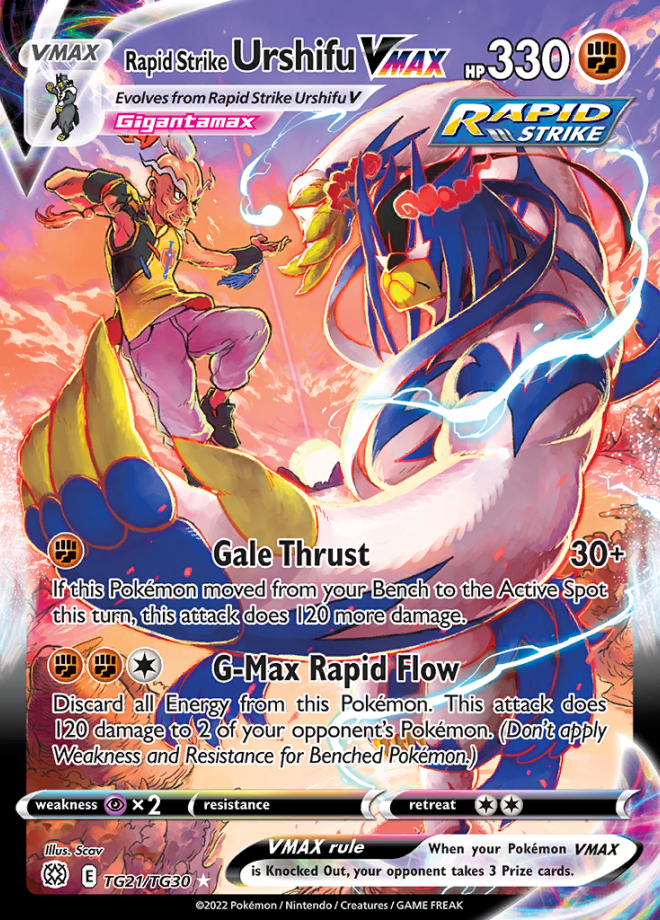 Urshifu features heavily in the Team Gallery subset, with 6 different cards to collect! We do love the golden black cards, but we chose this Urshifu for it's amazing art style. We never included Urshifu in our Best Cards To Pull From Battle Styles, so we hope this makes up for it by including it in this one!

Currently hitting around $50, this is the most expensive Team Gallery card so far. 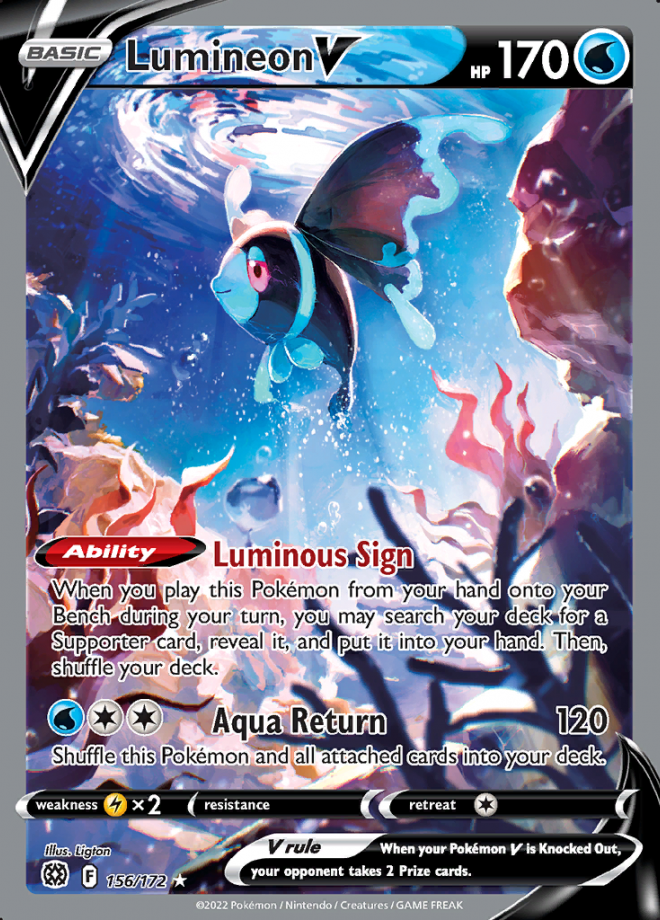 Lumineon gets lots of card retail space in Brilliant Stars, with three different V cards to collect. We thought this card might get overshadowed by the two big hitters (Charizard and Arceus) but surprisingly it is also hitting the $100 mark early on. As an Ultra Rare card, this card will be very difficult to pull, especially based on our own Pull Rate Data for Brilliant Stars. 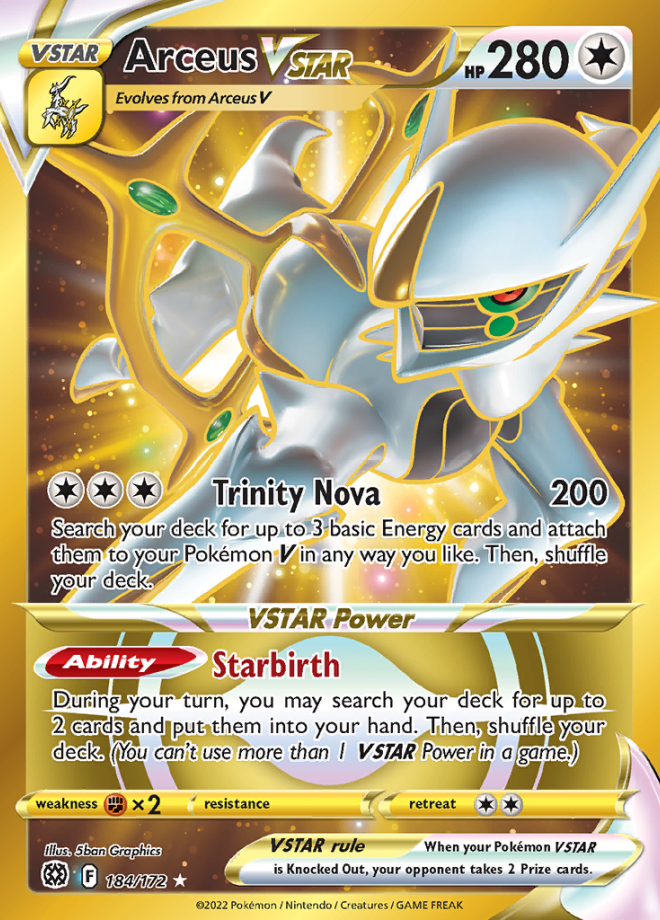 Wrapping up our list is the Gold Secret Rare Arceus VSTAR. It was a toss-up between this and the Gold Secret Rare Ultra Ball, but the art on this card is just too good to pass up. It is also hitting highs of over $100 compared to the Ultra Ball's $50 (not that price is everything!). There are four Gold Pokemon to collect in Brilliant Stars, which is the most in the entire Sword and Shields series!

What are your favourite cards in Brilliant Stars?

Did we miss any glaringly obvious cards that should be in this list? We've tried to pick a good variety but perhaps you think there is a card that belongs in it. Let us know in the comments your favourite cards from Brilliant Stars!

Today i came in the store and boguht brilliant stars 3 booster packs for 18,99€ u pulled out the rainbow charizard vstar and i was shocked i sewrched up best pulls from brilliant stars and found out i just got secone best pull from 3 packs EZ

I think the boltund V alt art is a top pull, I just so happen to pull that and rainbow rare charizard from the same pack! Best pulls I've ever had from one pack.