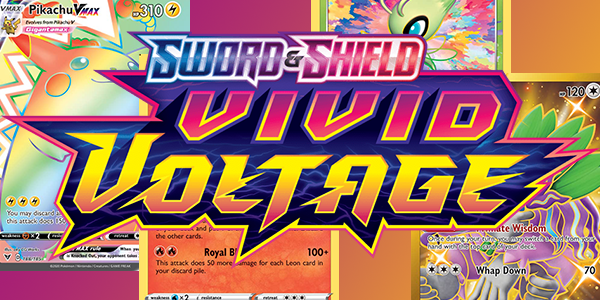 Pokemon TCG Vivid Voltage is a set that has many great cards that are rare and valuable and so this guide aims to showcase some of the best pulls from the set.

Since being released in November 2020, the Pokemon TCG Vivid Voltage set has been one of the most popular sets of cards for players to get their hands on. Not only does the set have numerous chase cards that collectors and investors want, but the set was released during a surge in popularity for the trading card game, causing supplies to be wiped out.

Today we'll showcase some of the best cards to pull from Vivid Voltage Set. This list isn't going to be just on price, but also on fan-favorites that you'll want to keep an eye out when Opening Vivid Voltage Booster Packs.

The #1 card in the whole set is the Rainbow Rare Pikachu VMAX, though often referred to as the ChonkyChew. This card currently sells for around $400.00 on card trading sites, though you may have a better time finding one on Ebay. A PSA 10 Pikachu VMAX will likely be worth $800-$1000 USD based on recently sold listings on Ebay.

The Rare Rainbow Pikachu VMAX is a secret card, not part of the original listed 185 cards (though still part of the set). People have spent thousands of dollars trying to pull this rare card from a Booster Box Set, whilst others have managed to open just a couple of Boosters and gotten it.

Charizard are the most popular cards in the Pokemon TCG, especially considering the original First Edition Base Charizard now goes for well over $100,000! In Vivid Voltage, there is a rare Charizard card that comes in normal and Reverse Holo versions. The Reverse Holo Charizard can go for up to $10 a piece and the card isn't all that hard to get hold of when opening packs.

Secret Rare Golden cards continue with the Vivid Voltage set, which contains 6 golden cards. Of The 6, 2 of them are Pokemon and the Obstagoon is the most valuable of the pair. Since there are only 2 golden cards in the entire set, it makes getting them a lot trickier and causes their price to swell. The Obstagoon goes for close to $30.00 USD.

The Amazing Rare rarity features some of the best looking cards in the Vivid Voltage set. They look a lot closer to the normal cards than the V and VMAX cards, but they also have something unique about them with their art breaking out from the card's face. The Celebi is certainly one of the most beautiful cards in the set, hitting the $10 mark since release.

The non-rainbow-rare Pikachu VMAX is still a really good looking card. In fact, you could say this is the better looking of them since it allows you to see the art more clearly. The VMAX version goes for around $30.00, so it's still a really good card to pull. And of course, it's a Vivid Voltage icon at this point and a must for any collector.

The Amazing Rare Raikou doesn't get much love or mention in the set, but it is certainly one of the cooler looking cards in Vivid Voltage. The rainbow swirl behind this electric legendary gives it a strange stand-out look that many of the other cards don't have. It goes for around $10, the same as Celebi, and is definitely one you'd want to have in your collection.

The mythical Pokemon Jirachi is another great Amazing Rare card to look out for. Like all Amazing Rares, the card is holographic and gleams when it catches the light. This card, along with the Razquaza have hit heights of $20 on card markets.

Rayquaza is a popular legendary Pokemon from the generation III games (Ruby, Sapphire and Emerald). Whenever the card is included in a set, you can bet it's going to be worth a good deal and in Vivid Voltage it comes close to being the most expensive Amazing Rare in the set. Rayquaza is a flying/dragon Pokemon and many players will come across it in the video games due to it's usefulness and popularity.

The full-art Pikachu V is another card you want to keep an eye out for. Apart from looking great, this normal-looking Pikachu goes for up to $80.00! It's non full-art counterpart Pikachu V goes for a small $3-$4, so you can see why many full-arts appear in this list as they are the most valuable cards.

All of the Rare Rainbow cards in the Vivid Voltage set go over the $10 mark, but the Rare Rainbow Nessa goes for close to $50! Nessa is the Gym Leader from Sword & Shield, utilizing water Pokemon.

What are your favorite cards in the Vivid Voltage set? Are you chasing any cards not listed above and if so, how long did it take you to get the card you wanted? Let us know in the comments!