Pokemon Celebrations is one of the most popular sets in Pokemon TCG history and it's not hard to see why, with some of the best cards available to pull from previous sets released back in the day.

To celebrate the 25th anniversary of Pokemon, The Pokemon Company have released a set called Celebrations that includes reprints of cards from previous sets. Some of the most iconic cards are getting a reprint, including Base Set Charizard, Gold Star Umbreon and Dark Gyarados. All of these cards are printed in their original forms, with updated holographic, texture and the 25th anniversary logo.

Celebrations is a 50 card TCG set that is split into a main set and a sub-set. The Sub-set contains 25 cards that are reprints from previous series, including from the very first Pokemon TCG Base Set. Check out the Pokemon Celebrations Card List for the complete set of cards you can collect.

The set comes from Booster packs that contain 4 cards each. There is a chance for a booster pack to contain 1 card from the sub-set of reprints. So far, fans of the Pokemon TCG have suggested that pull-rates for cards are very generous and with it being such a small set (compared to other TCG sets), it shouldn't take too many packs to get your favorite cards.

Today we'll take a look at some of the best cards you can pull from Pokemon Celebrations. Let us know in the comments your chase-cards!

There are so many good cards in this set it was hard to choose from! This has to be one of the most iconic sets to ever be released! 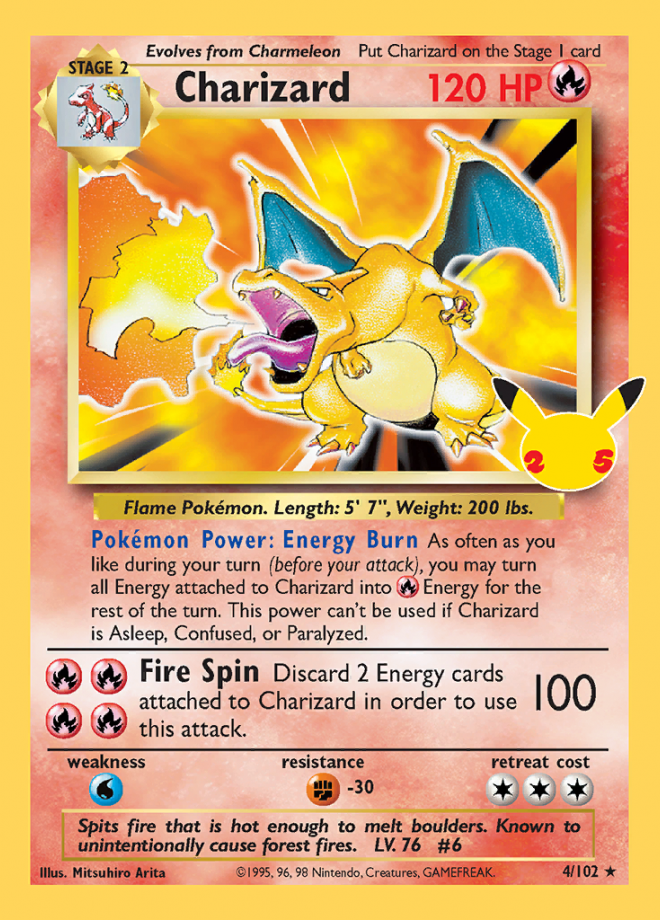 Starting off the list it has to be the Base Set Charizard. Originally released in 1999, the Base Set Charizard is probably the most well-known "rare" Pokemon TCG card of the entire series. The original card, in first-edition and mint-condition, sells for well over $100,000 on auction sites! It is part of the 25 sub-set card list, so it will be a little harder to pull than the original 25 cards.

If you missed out on the original Pokemon craze in 1999, or just want to relive some of the nostalgia, opening up a pack of Pokemon Celebrations and pulling a Charizard might be just what you need. 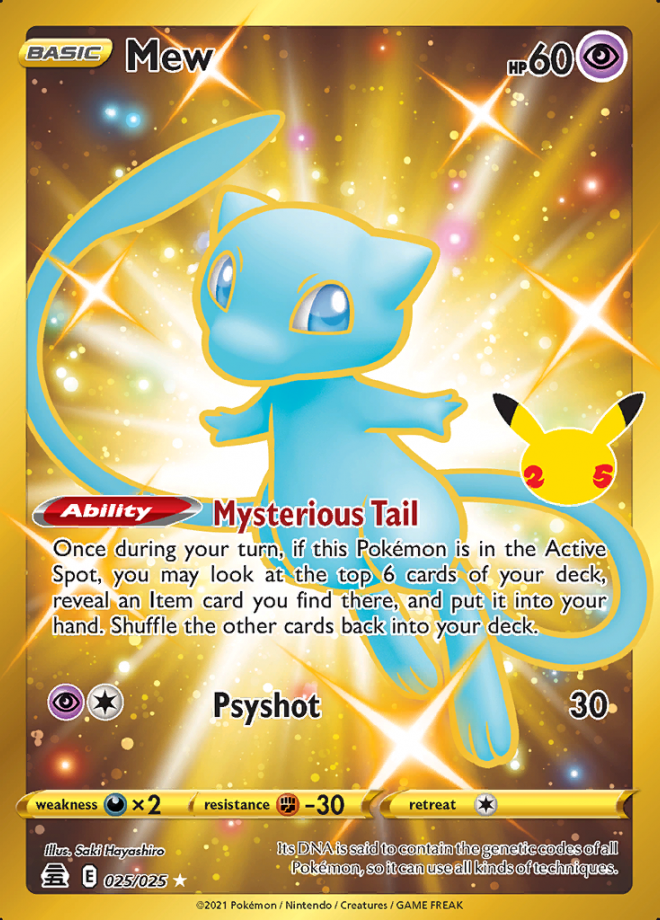 Gold cards have been some of the hardest pulls in recent series, including in the Sword & Shield era which has many Secret Rare Gold Cards. This new Golden Mew card is part of the original 25 set of cards in Celebrations and will be one of the most chased cards in that subset. It's the only golden card in the set and it remains to be seen whether this will be a rare-pull like other gold cards from Sword & Shield sets. 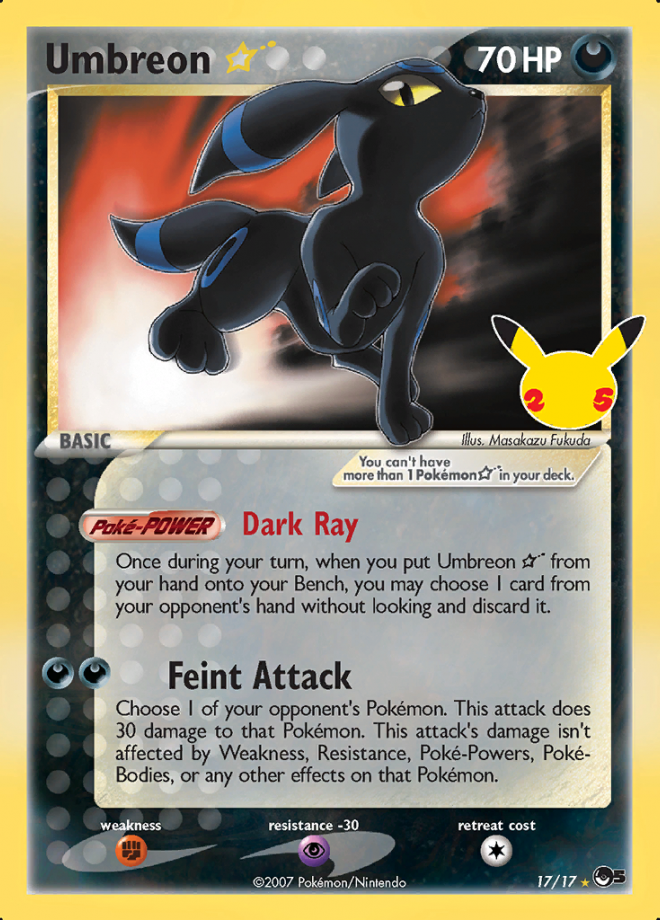 This card was originally released in the POP Series 5 Promo set in 2007, which is a small set of cards given to players to encourage playing in real Pokemon Organised Play events around the country. The original Gold Star Umbreon can go for tens of thousands of dollars if in mint-condition and so fans are getting a great chance to pull this super-rare card again in Celebrations. 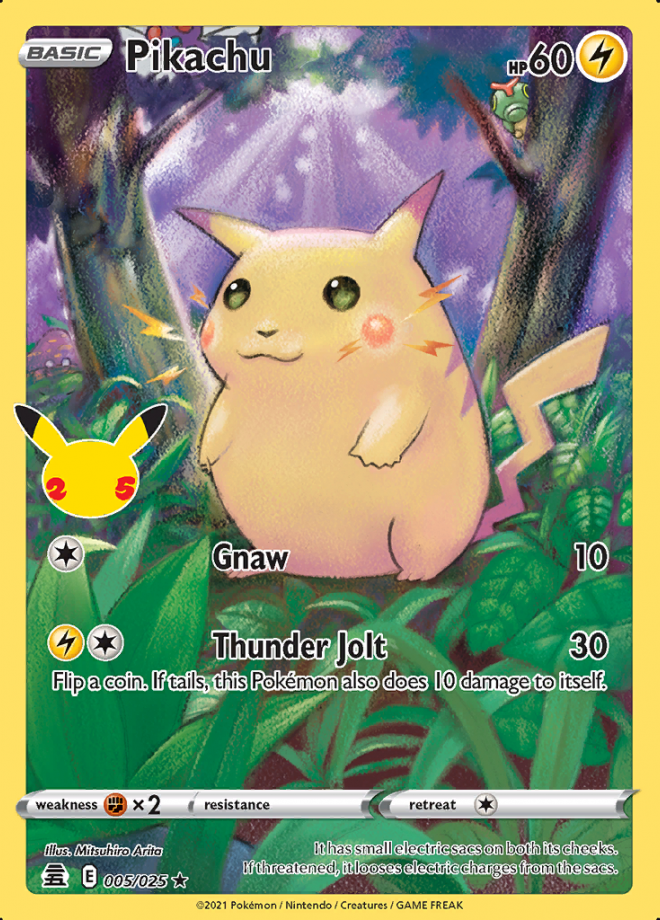 This full-art Pikachu might look familiar to some, as it's recreation of the base-set Pikachu card in a full-art version. This card is in the main-set, so it's likely to be an easy-pull card. Fans should note it also has red cheeks- which could be a nod to the fact that the first-edition base set Pikachu card had red cheeks, but this was subsequently changed to yellow cheeks in later printings. There are ALOT of Pikachu cards in this set, but this has to be the favorite the main subset. 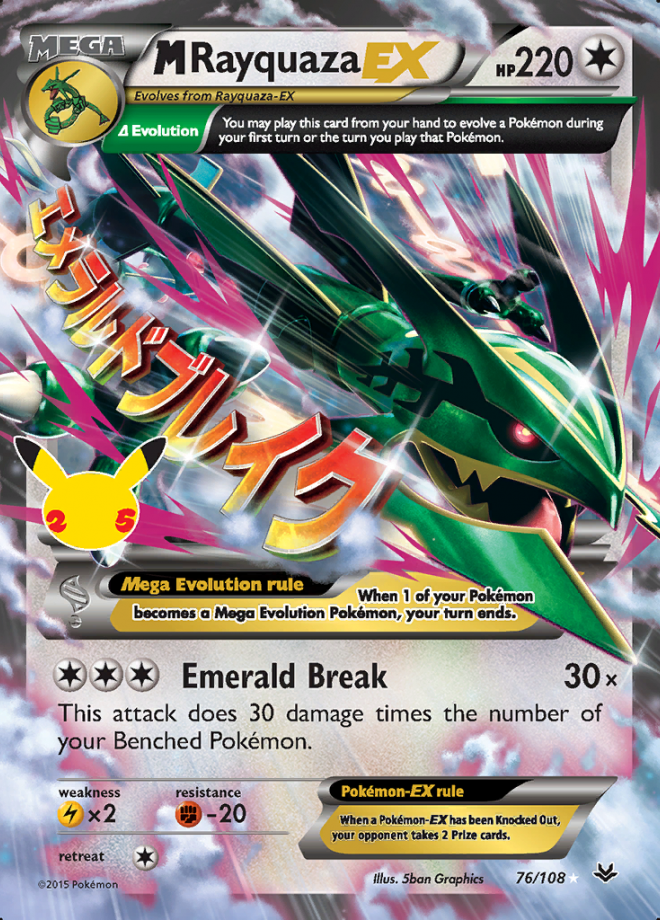 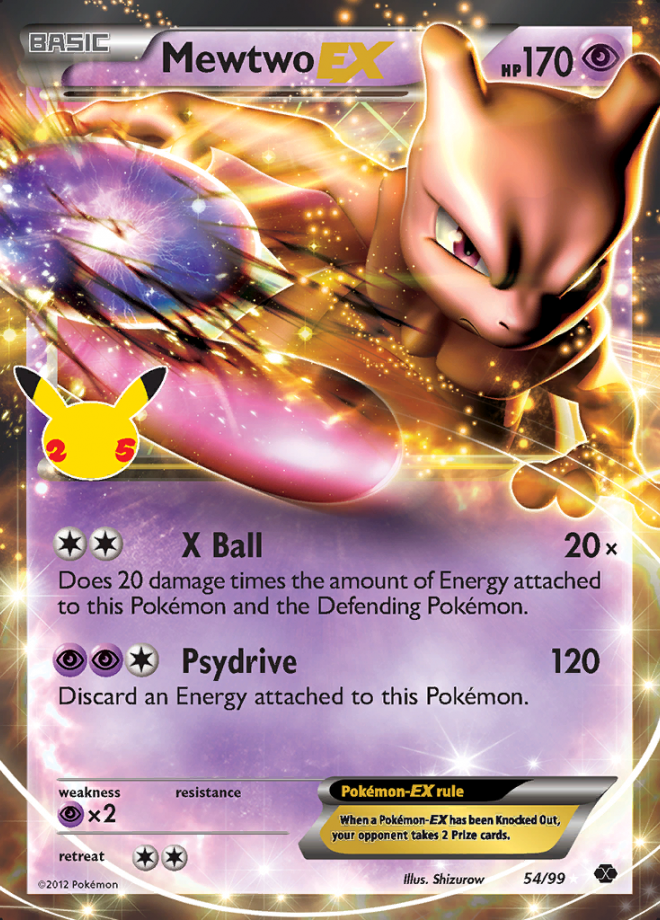 There are lots of Mewtwo-EX cards, and this full-art version is from the Black & White Next Destinies set. Mewtwo is obviously one of the most iconic Pokemon so it needed to have a slot in this Celebrations set, considering Mew got three slots! You can still pick this card up for less than $10 on most marketplace sites, so if you fancy having the original over the Celebrations-themed one, go for it! 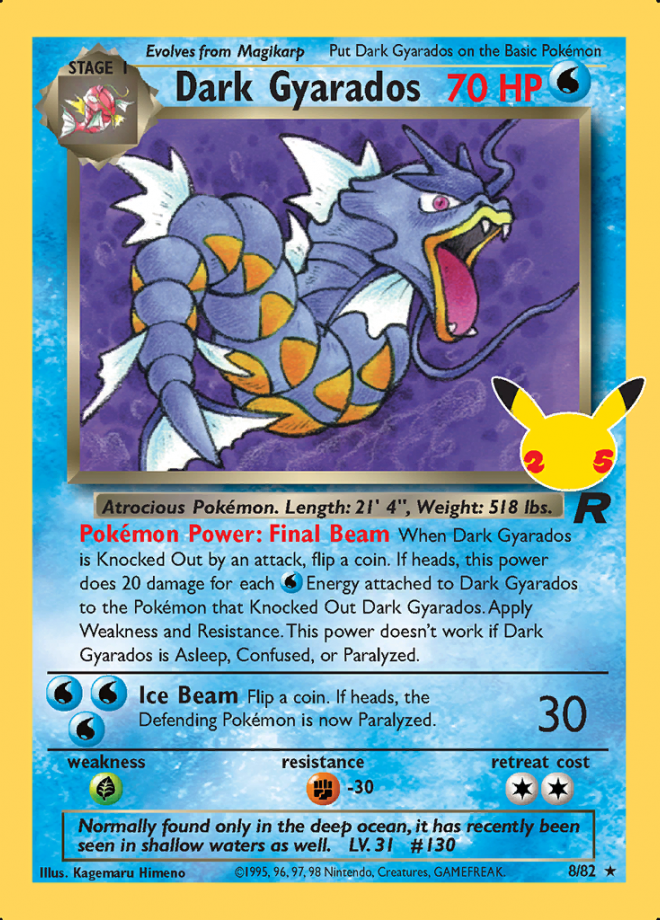 This legendary card could be pulled from the Team Rocket set released in the first generation of Pokemon cards. The hype of Pokemon TCG in the last few years has caused price cards to go through the roof, with Team Rocket Booster Boxes (first edition) going for several thousand dollars on auction sites. Dark Gyarados wasn't the most sought after card from the set, but it's still very iconic and great throwback to the Team Rocket set. 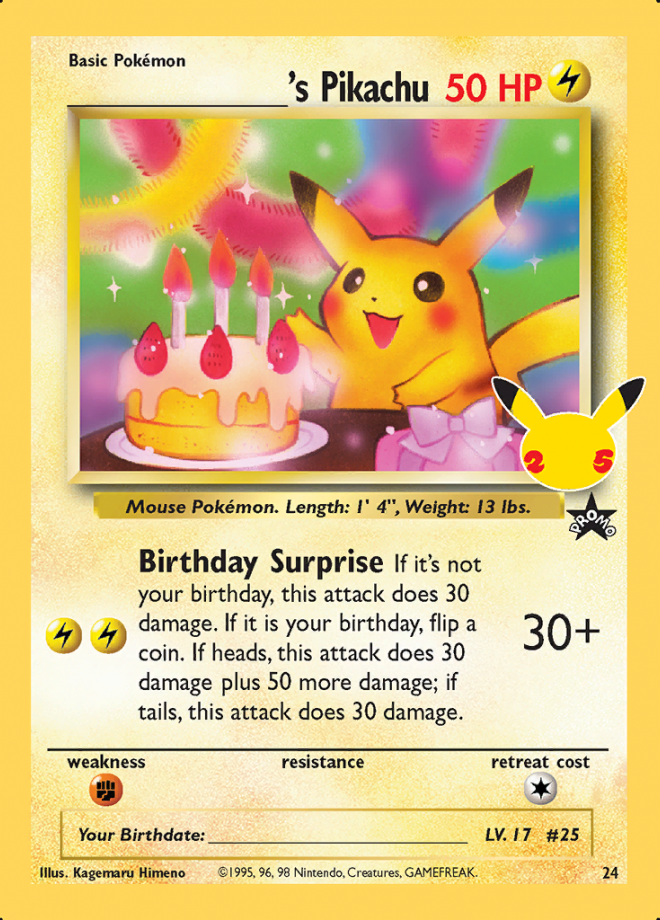 We can't put all the Pikachu's in this best cards list, but ____'s Pikachu is definitely up there. Released as a Black-Star Promo card by Wizards Of The Coast, players could get this card by participating in a competition to create your own Pokemon Card. With it being re-released in Celebrations, players can now safely add their names to the cards title as this card is likely to have lots of duplicates! It is part of the sub-set of Celebration cards however, so you may want to keep a few around just in case! 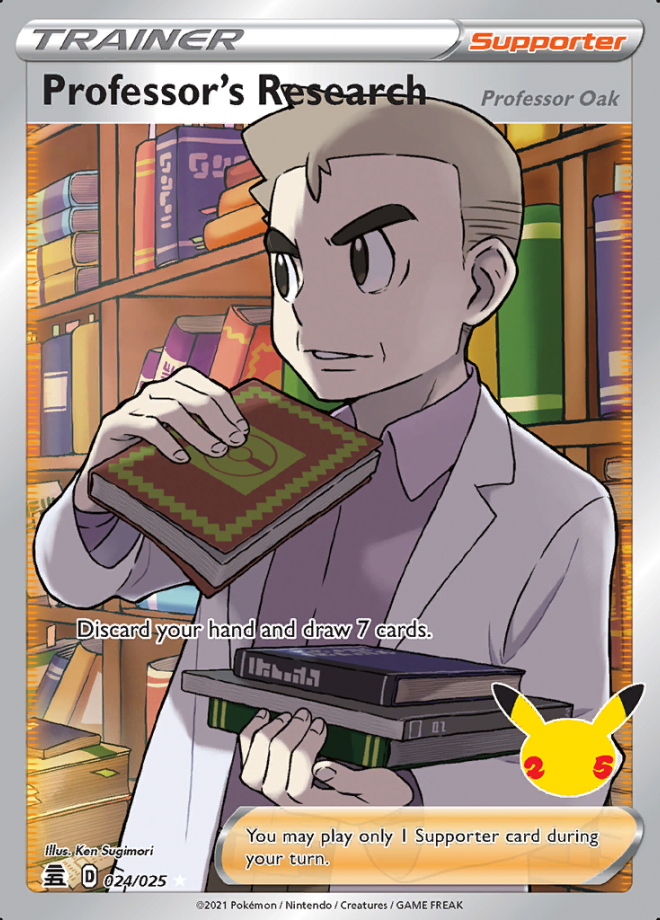 If you've been collecting Pokemon cards for the last several years, you'll know that they love their full-art trainer cards and they are some of the most popular with fans. Professor Oak, the original Professor from the T.V. series and games, features heavily in this set, and the full-art trainer art is a great addition to the main-25 card set of Celebrations. 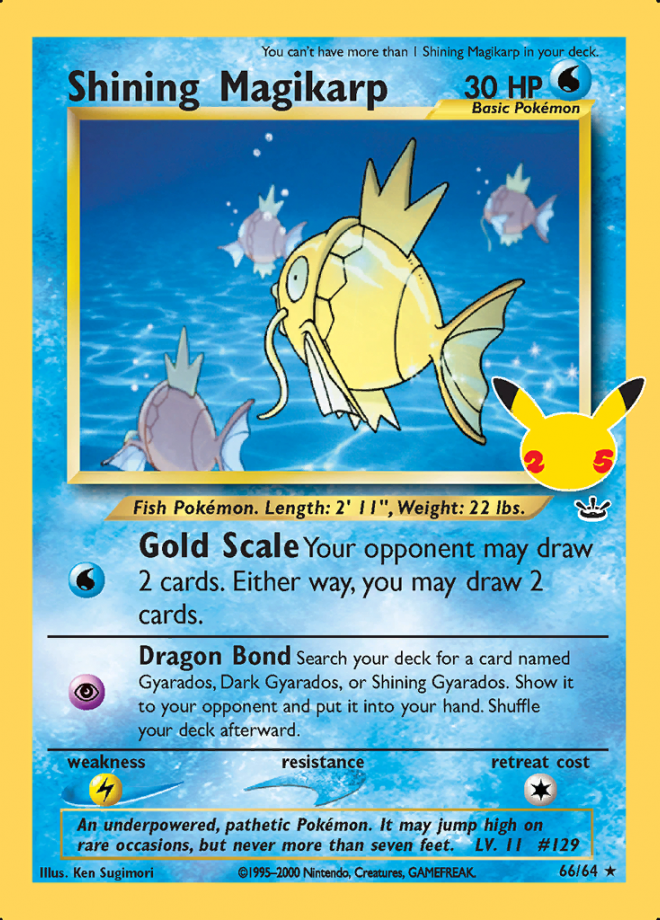 Despite being a first-generation Pokemon, Shining Magikarp is from the second-generation of Pokemon TCG packs with the Neo Revelations set released in 2001. Mint first edition versions of this card can fetch up to a thousand dollars, so if you missed out on it first-time around you're in luck. The card is actually a secret-rare, with 66/64 for it's numbering and was a very difficult card to pull from packs when it was released in 2001. Hopefully your luck will be in with you this time around.

Are there any cards from the Celebrations Set that you are looking to get a hold of? The three base-set Pokemon have been the most talked about so far.

What about cards you would have liked to have seen included in this set? Any glaringly obvious omissions? Leave a comment below!