Released on 27th August 2021 on the back of Chilling Reign, there are a total of 203 cards in the main set, with an additional 34 Secret Rare cards to make up the master set of 237 cards. The series continues the trend of including V and VMAX cards, followed by a massive amount of Ultra Rare full-art cards including Trainers, Pokemon V, Pokemon VMAX and special gold cards.

This is also the first set in the Sword & Shield series to contain the Dragon-type Pokemon, with Rayquaza being heavily featured in both V and VMAX form.

The most sought after Pokemon in this set are of course the Eevee Evolutions. These cards were super popular when they were released in the Eevee Heroes set in Japan, with many fans importing the set early so they could get their hands on these cards.

Like Chilling Reign, this set is huge, which means pulling all the cards is going to be pricey for Pokemon TCG Collectors. Early indications are that pull-rates are similar to Chilling Reign too.

Take a look at the cards we think stand-out in this set. There's a lot to choose from, so apologies if your favourite didn't make our list! 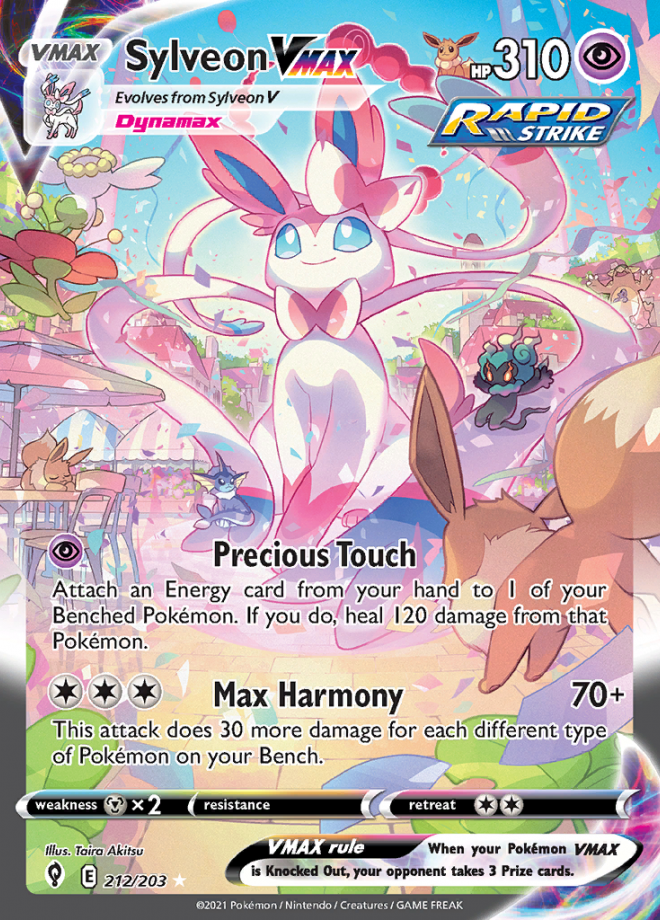 Our first entry in the list is the Sylveon VMAX Alternative Art card. This Ultra Rare card is going to be a top 3 card for price when things settle down and was one of the most sought after when it came out with Eevee Heroes in Japan.

Sylveon features six times in this set, but no rainbow rare for those who like to collect the RBG cards. 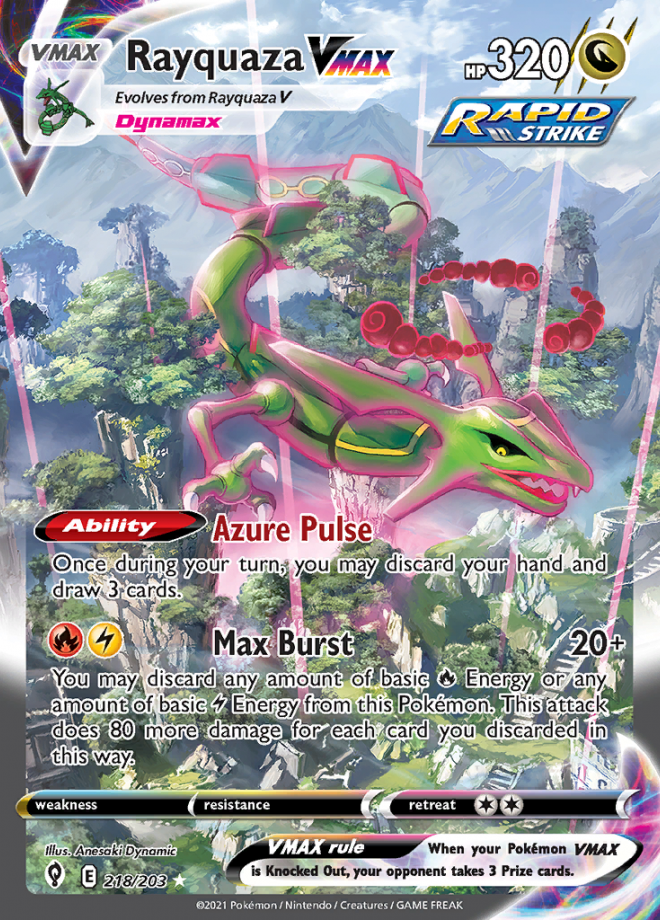 When the card lists were announced, many thought the Rayquaza VMAX Secret Rare card would be one of the most popular. As it turns out, it's already the most expensive card in the set, going for prices close to $400 in the early release of the set, which is more than double its closest competitor.

Fans will be extremely lucky to pull this card, especially with there being over 34 secret rare cards to collect. 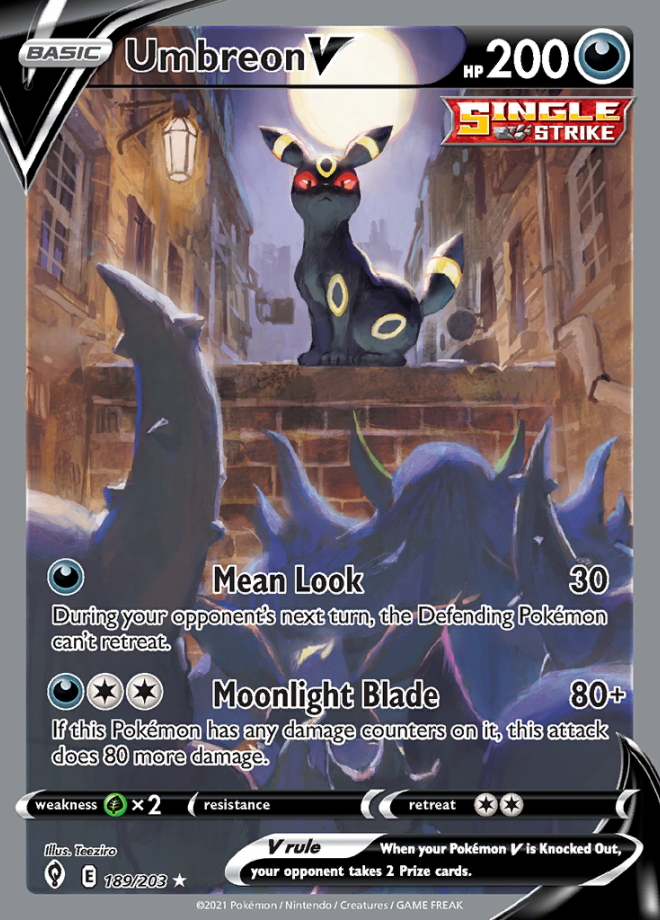 Umbreon is many fans favorite Pokemon and even if the card wasn't an Ultra Rare, the price for it would still be high.

Umbreon V is overshadowed by it's secret rare Umbreon VMAX, but this version is just as awesome-looking (if not better) than it's counterpart. Umbreon is a dark-type Pokemon, released in generation II of the Gold and Silver series. 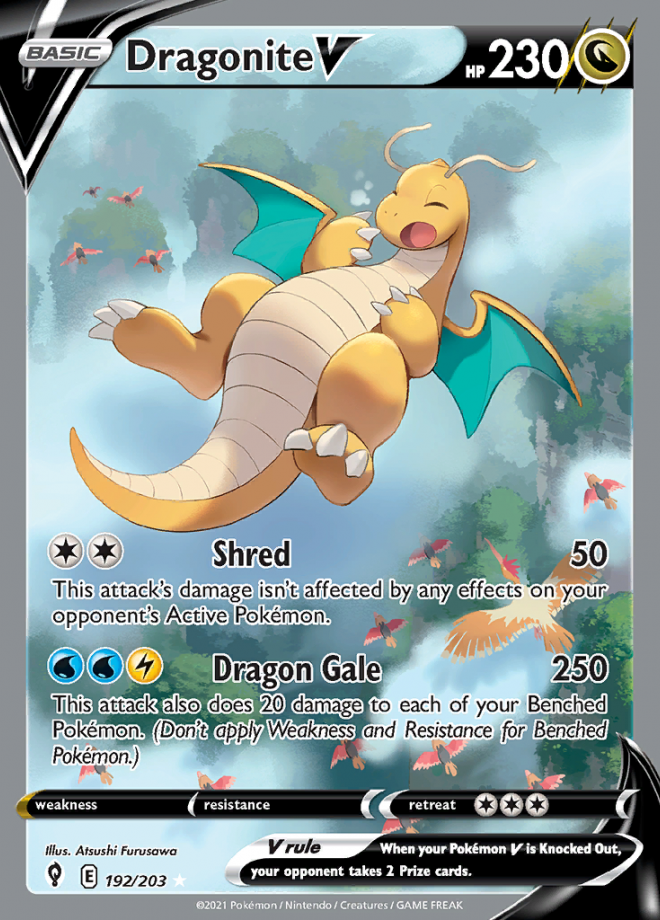 Another fan favorite will always by the mighty dragon-king Dragonite.

As part of the original 151 Pokemon, Dragonite is often a sought-after card and in Evolving Skies Dragonite gets a beautiful Ultra Rare V alternative art card. It's already going for around $100.00 on the market as of today, so it will be up there with one of the top most expensive cards. 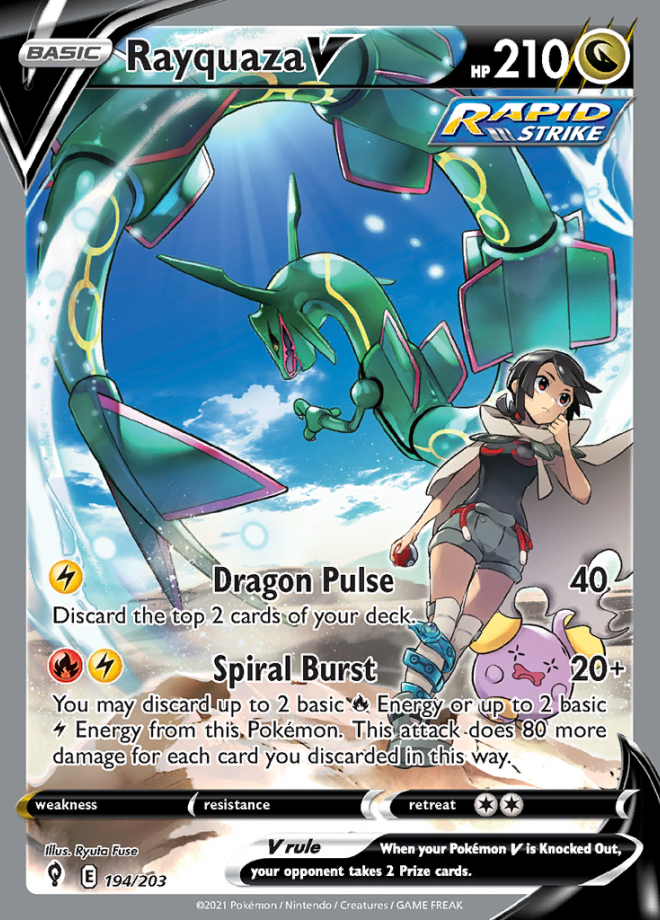 Rayquaza is a legendary Dragon/Flying type Pokemon and is heavily featured in Evolving Skies set.

There are 6 different Rayquaza cards to collect, including this gorgeous alternative art V card. There are also two secret rare cards, including a Rainbow Rare Rayquaza that could just have easily made this list. 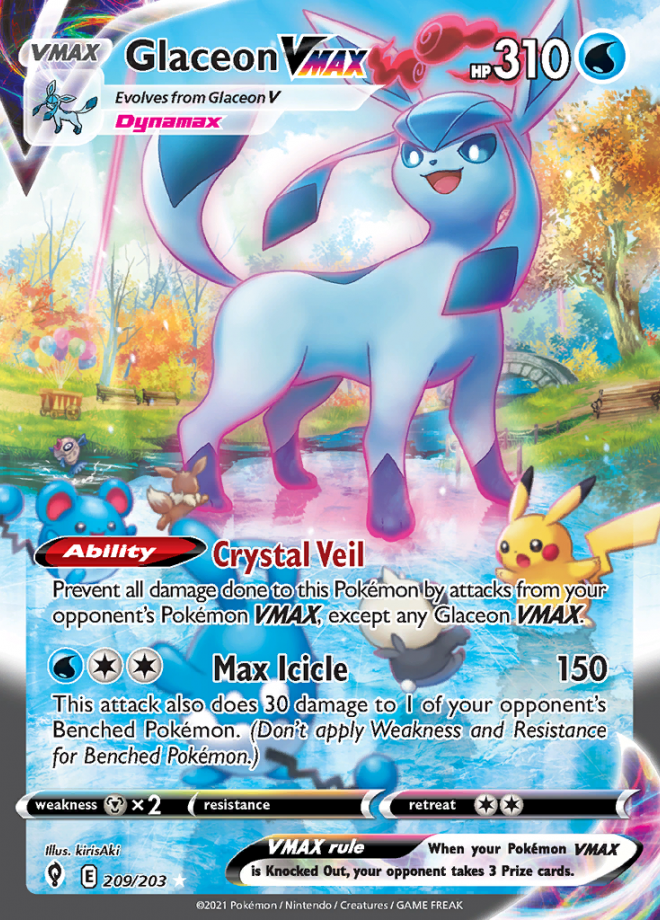 It was a toss-up between choosing the Glaceon V or the Glaceon VMAX cards for this list, but in the end we went with the VMAX.

This Secret Rare card features many other Pokemon in its full art card, including Pikachu, Maril and Eevee. Good luck trying to pull this one- it's already hitting highs of $120.00 on the marketplaces. 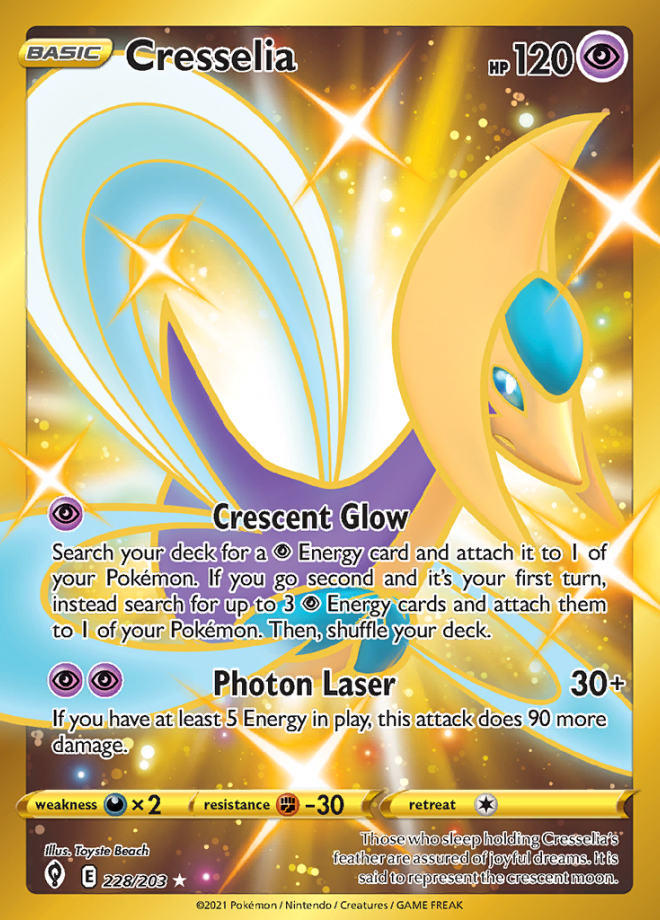 Each series of Pokemon TCG cards brings new Secret Rare Gold cards and usually we are limited to just a few Pokemon.

This time around we have three Pokemon: Froslass, Inteleon and Cresselia. Of the three, we think the Cresselia looks the best and it'll be interesting to see how much demand there is for it. It probably won't hit the highs of the Gold Snorlax from Chilling Reign, but it will still be a great pull nonetheless. 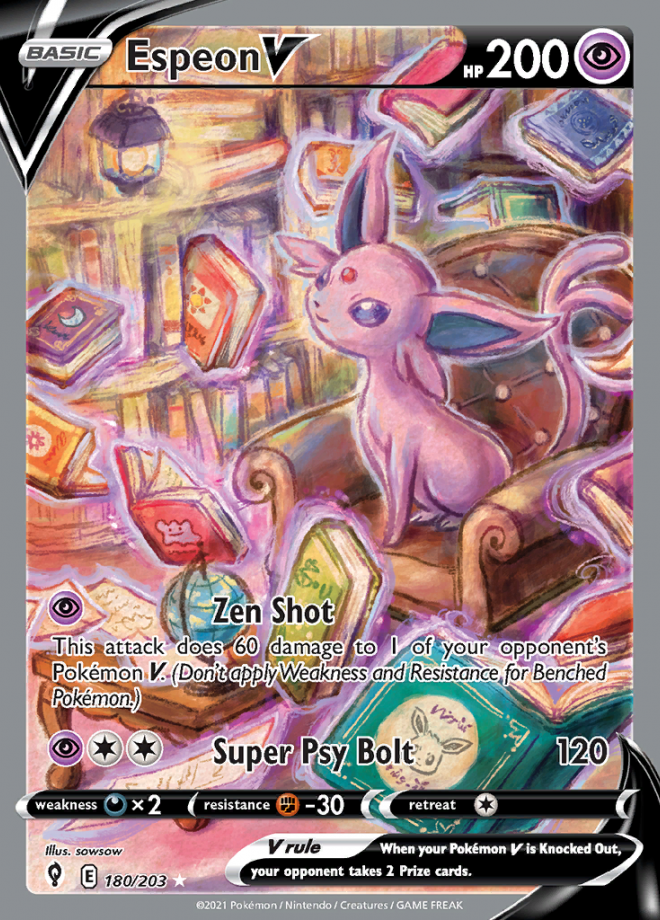 We love this type of artwork as it really stands out from the original style that most cards are done in.

Espeon V is an alternative-art card that is Ultra Rare; there are three other versions but this one is definitely the best looking. 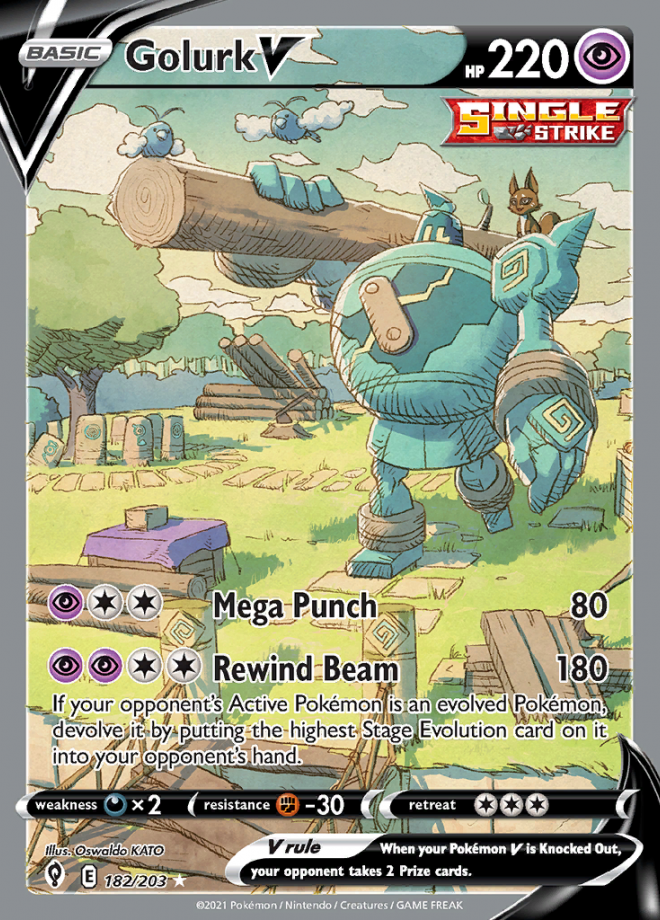 Golurk V will be overshadowed by all the beautiful Eevee cards, but this one is going to be a favorite to pull due to it's amazing art.

There are three Golurk holo cards in this set to collect, with this one's price hovering around $30.00. 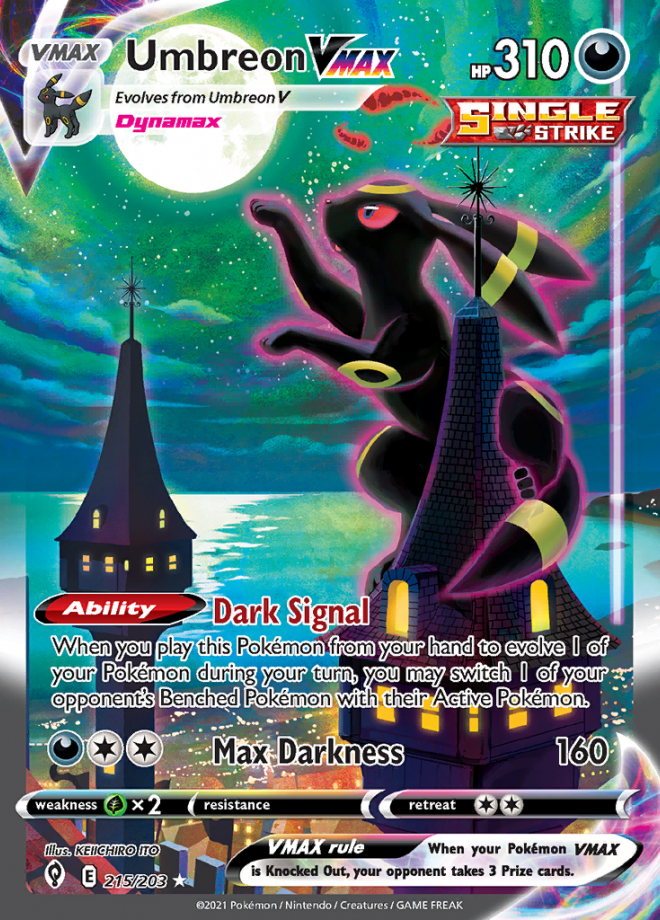 Currently the second-most popular card in the set in terms of price, the Umbreon VMAX alternative-art secret rare is going for over $200.00 currently.

Fans of the series will remember other popular Umbreon cards like the Gold Star Umbreon from the Pop Series 5 that currently goes for $30,000 + at PSA 10 grading. Let's hope this one reaches those heights too! 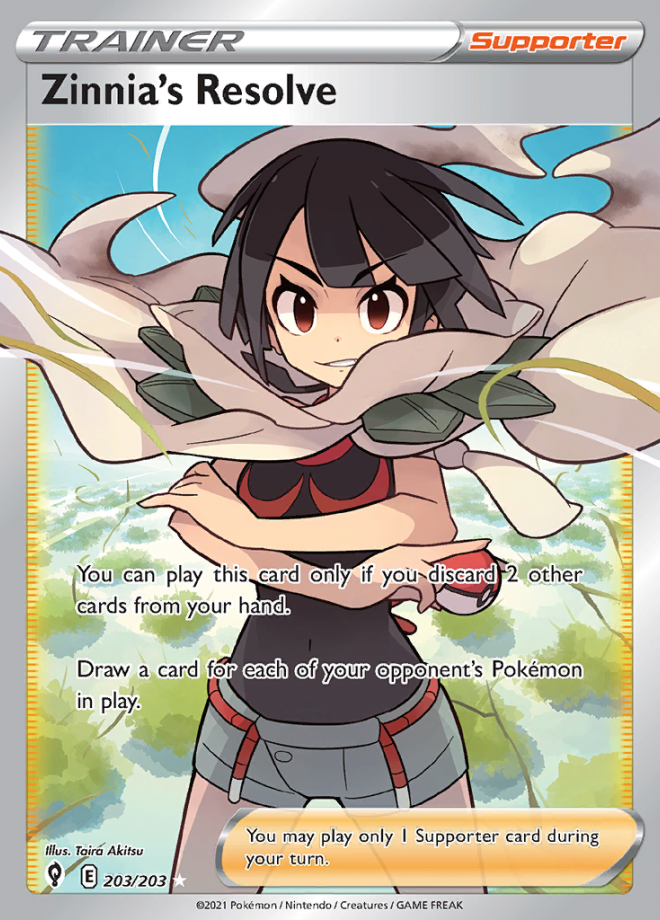 The full-art trainer cards in this set are not quite as good as previous sets.

Of the best, Zinnia's Resolve is probably going to be the most popular. Zinnia appears in the Delta Episode of Pokemon remakes Omega Ruby and Alpha Sapphire.

Let us know your favorite card from the Evolving Skies set in the comments below! It doesn't have to be the most expensive either- it could be a super nice rare holo card or a simple common!

I am honestly in love with all the cards I got in ONE pack, I got all the full arts!
But my honest favorite is Umbreon V, I was so shocked to see the gorgeous coloring on it, and the look of Umbreon sent shivers through my body!

My Favorite Card Is Rayquaza V