Lost Origin is the eleventh main set of the Pokemon TCG series Sword & Shield and these are some of the best cards you can pull from the 247 card set.

As a main series of the set, Lost Origin comes in Booster Packs of 11 cards and each pack has a chance for you to pull something rare. Check out our Lost Origin Pull Rates guide to get an idea of how rare some of these Pokemon TCG cards are in Lost Origin.

There are a total of 15 Rainbow Rare cards to pull from this set and 6 Secret Rare Holo gold cards. If you're planning on collecting Lost Origin set, there are going to be plenty of chase cards for you to want after.

Lost Origin is similar to Astral Radiance, in that it contains a subset of Trainer Gallery cards that can be pulled from the set. There are 30 in total, including secret rares and ultra rare cards. The Trainer Gallery has a special number notation of TG and all the cards will feature a Trainer and a Pokemon in the artwork.

Lost Origin is a great set featuring some of the best Pokemon TCG art we have seen for a while. Which makes our job a lot more difficult when deciding what the best pulls for Lost Origin might be. We've tried to include a variety of different rarities and we know you guys are going to have your own favorites- so share them with us in the comments below! 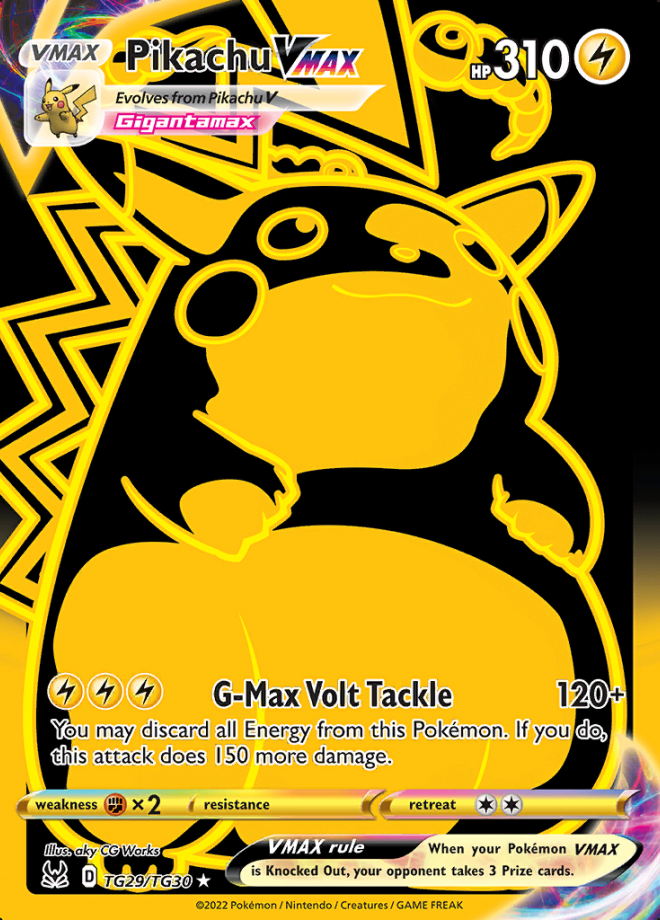 There are so many good looking cards in the Trainer Gallery subset of Lost Origin that this list is dominated by them. We start off our first pick with the Pikachu VMAX, otherwise known as the Chonkachu, which was one of the top cards to pull from Vivid Voltage as a Rainbow Rare. Now it comes in the Secret Rare Holo Gold/Black form, which makes it look great.

You'll see Pikachu appearing quite a lot in this set, but then again, it's Pokemon- when do you not see Pikachu??? 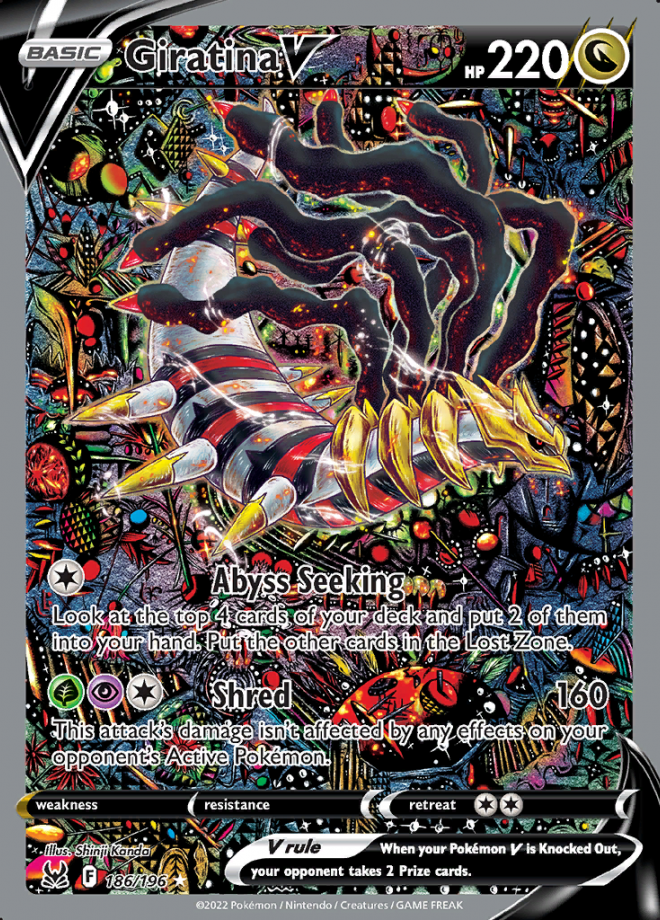 This card is going to be everyone's favorite from Lost Origin to pull. Giratina V is an alternative-art card that is currently going for over $200.00 on card marketplaces and the set hasn't even dropped in most parts of the world.

Giratina is a Legendary Pokemon from the Generation IV series (Diamond and Pearl) and remains a popular Pokemon among fans.

Giratina has SIX cards in Lost Origin, so if this Pokemon is one of your favorites, you're in luck! 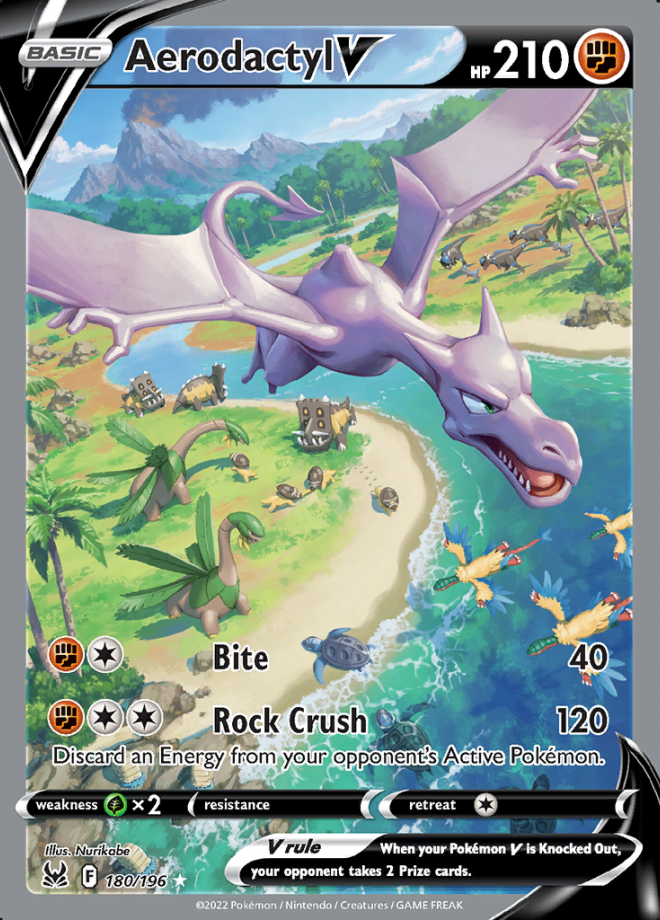 Alternative Arts are some of the most sought after cards in Pokemon TCG sets due to their artwork really standing out. The same goes for the Aerodactyl V Alternative Art card, which you may have seen this style for previous sets drawn by the Pokemon TCG artist Nurikabe.

It was a tough choice between this Aerodactyl or the Rainbow Rare version- but both are likely to be top pulls for Lost Origin. 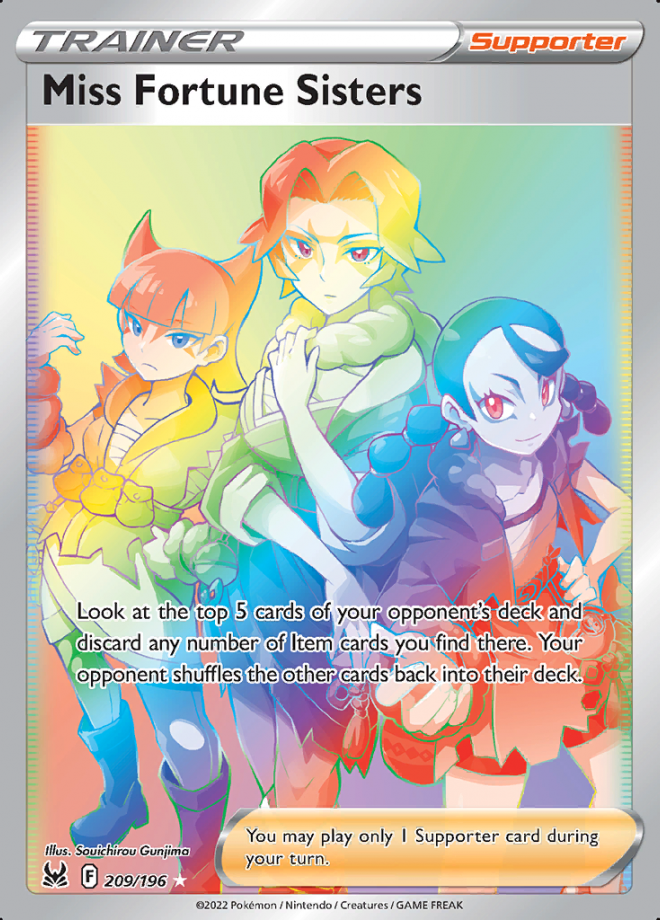 Currently going for around $30.00, this card might be overshadowed by other great trainer cards in the Lost Origin set. 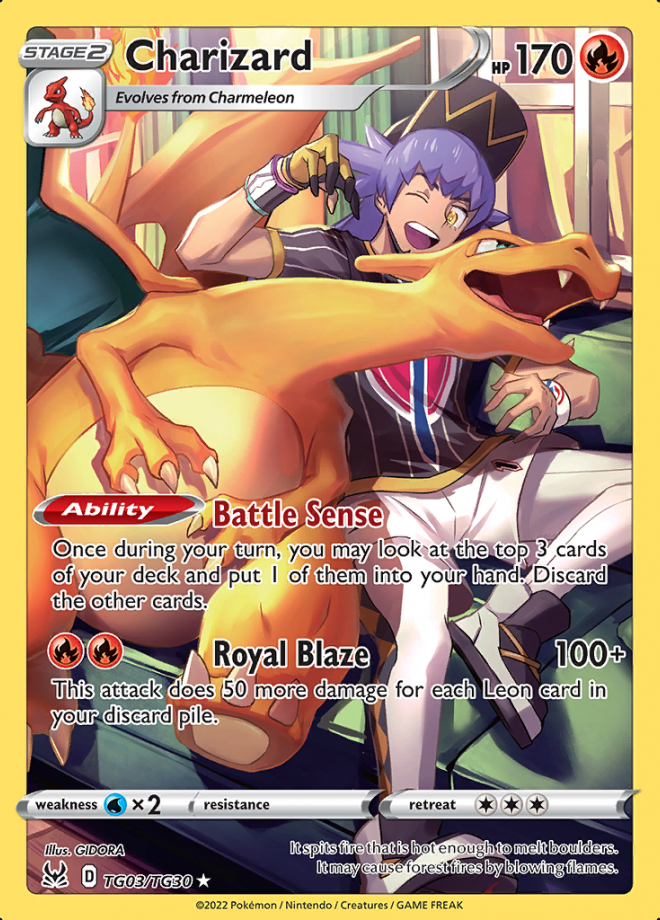 Charizard was the star of the show in the Brilliant Stars set, and we didn't get a single one in Astral Radiance. You'll only see one Charizard card in the Lost Origin set, coming in the form of this Trainer Gallery card. It is likely to not be as rare as some other Charizard cards in the series, but Pokemon fans love this orange dragon and so will likely be a top hit to pull.

Currently selling for around $30, which is pretty good value for a Trainer Gallery card. 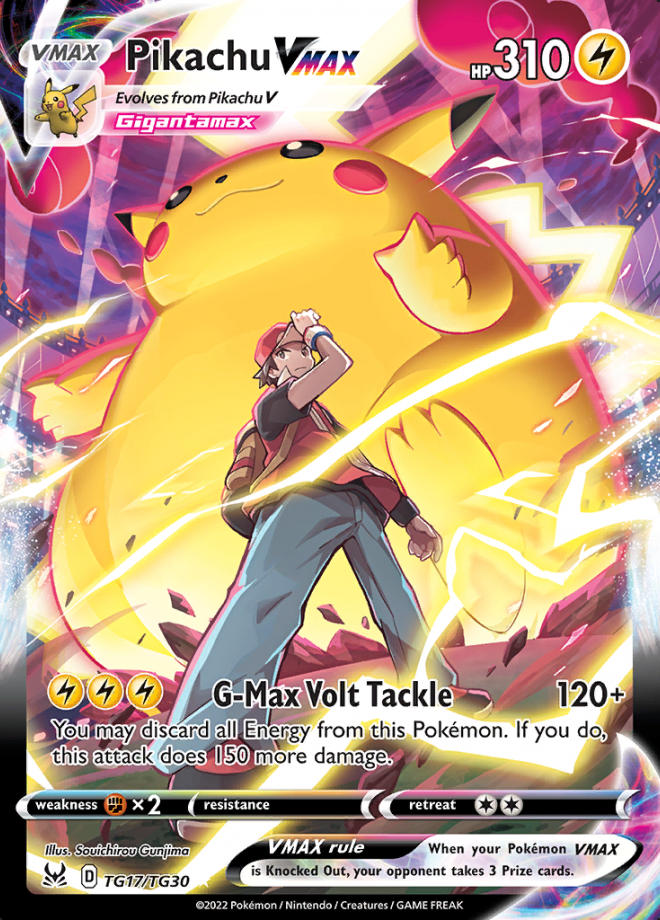 We have already included one Chokachu in this list, but the Trainer Gallery version has some really great art and is definitely a throwback to the Vivid Voltage set. This card is already hitting dizzying heights of $80+ and as the set becomes more widespread it will be interesting to see what the price of this card lands.

The Rainbow Rare Pikachu VMAX from Vivid Voltage was one of the toughest cards to pull; so this is another chance for fans to get their hands on it. 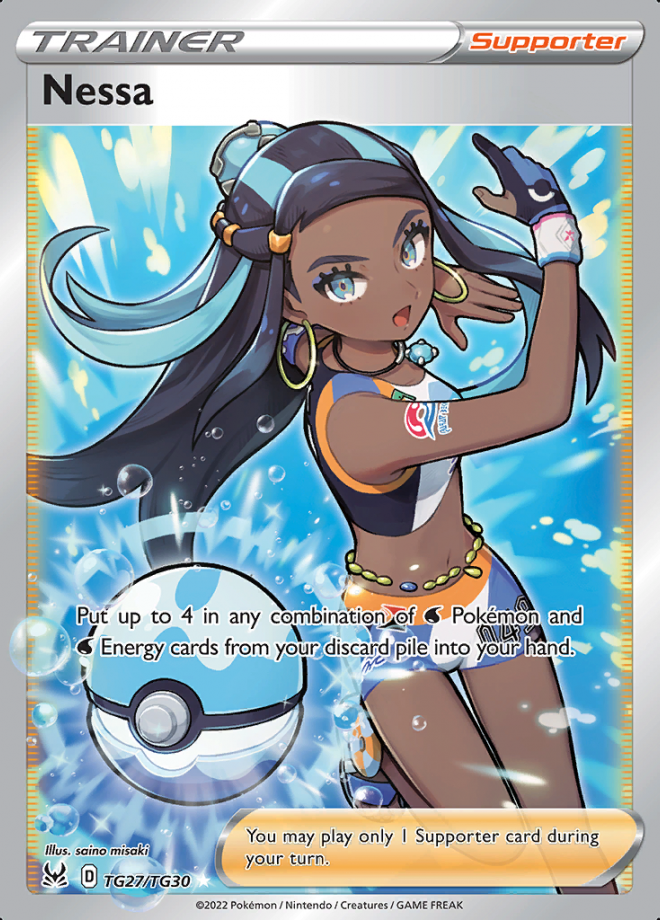 Nessa is a Gym Leader from the Sword and Shields series. 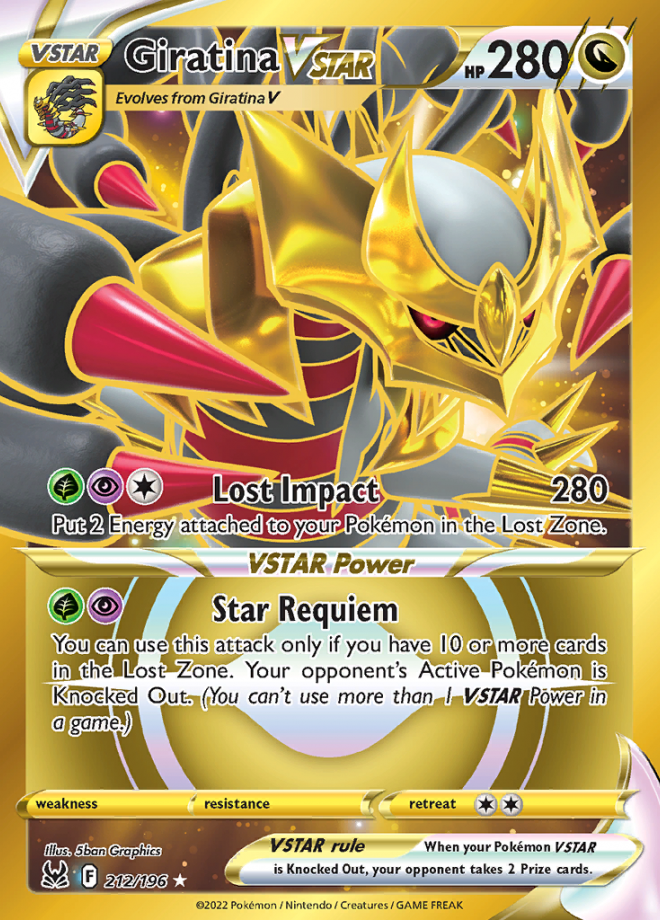 A top pulls list wouldn't be complete without a Gold Secret Rare card and the Giratina VSTAR gets the spot this time round. Settling at around $80, Gold Secret Rare cards are some of the rarest cards in a Pokemon set. We hope you've purchased plenty of Booster Packs to pull this guy! 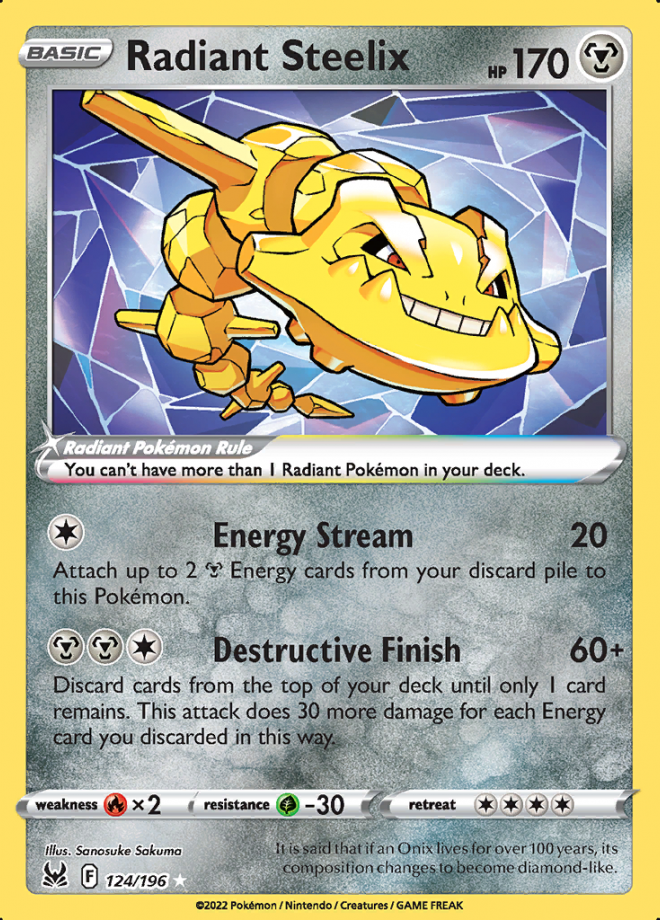 The Radiant Pokemon continue in this set. We've decided to go with the golden Steelix Radiant card, but there were also Radiant Gardevoir and Radiant Hisuian Sneasler for you to pick from. 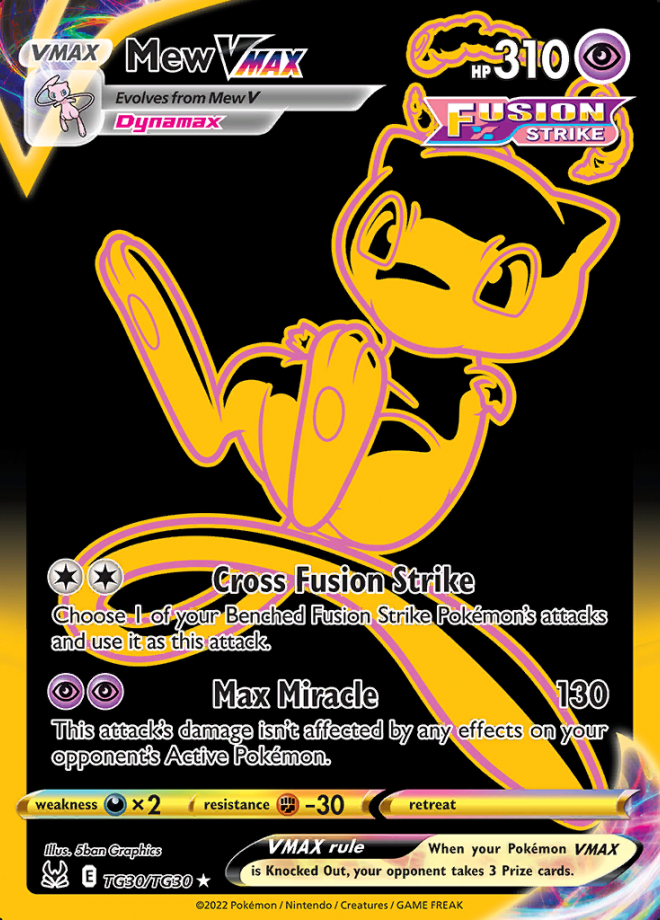 We finish our list with the Mew VMAX card that was featured in Fusion Strikes set. Similarly to the Pikachu VMAX, this card is part of the Trainer Gallery and comes in the black/gold version as a Secret Rare Holo.

That wraps up our list of best cards to pull from Lost Origin. Let us know in the comments which cards would make your list and which ones you are most excited to pull! Good luck everyone!