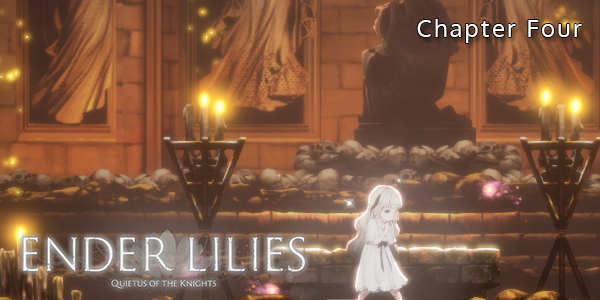 Chapter Four of the Ender Lilies Walkthrough sees us head into the Catacombs of Land's End with several bosses for us to take down and new Spirit Skills to learn. This guide picks up after we have taken down Dark Witch Eleine and have learned the Action skill Witch's Bubble.

As with other guides, first thing we should do is go back to previous maps now that we can swim underwater with the action skill Witch's Bubble from Chapter Three. 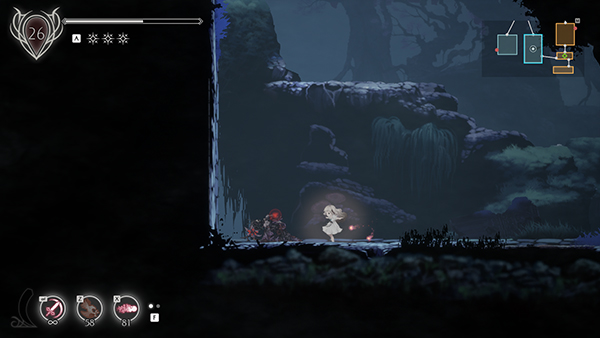 We start at C14 at the Respite. Jump into the water and swim deep down so that you take the left path to C11. If you keep swimming left you'll fight a few mobs and come across 10x Stagnant Blight.

Next go to C9 Respite and head to C10. You can now dive into the water on the right of this level and pick up 10x Furious Blight in the middle of the map. Once you come out of the water, you can head up to where the locked door is and hit a green light nearby to open it. You'll also find the [FINDINGS] Tarnished Picture on the floor nearby.

In the same level you should come across a jump-downable bridge where you'll find another Green Light that opens a door on the top left of the map. In this room you can find a Priestess' Wish.

Finally, there is a lever at the bottom left of the map (above the water). This is a timed lever and so you need to jump into the water and swim as fast as possible to your left where the door is that lets you get to C16.

C16 is actually a dead-end for now, but you can pick up 10x Furious Blight as you jump down past the Witch Tree mobs in a hidden area.

Now fast travel back to A11 where you can dive into the water on the left and pick up an Amulet Fragment.

You can find a Giant's Ring Relic in B4 by going down into the water on the left of the map. Equipping this slightly increases your ground attacks.

That's everything! Now we can head to the Catacombs by heading to B15. In B15 as you head down, before going into the water towards D1, head left and jump down, dodging a couple of exploding ogres and pick up 10x Stagnant Blight. 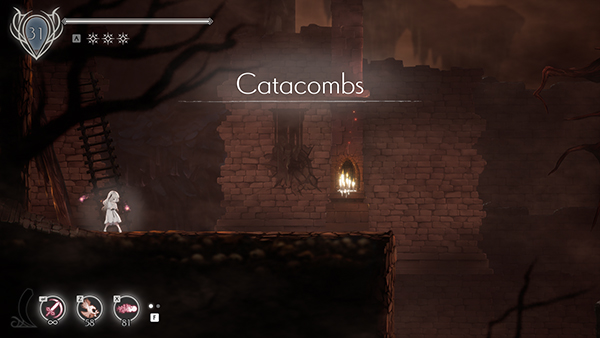 Mobs In This Area 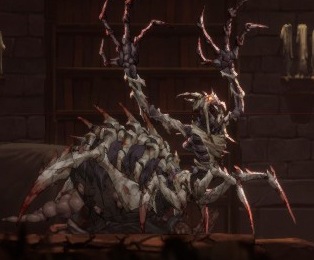 Watch out for the Floor Spider's powerful scratch attack. It can also shoot out fire orbs. 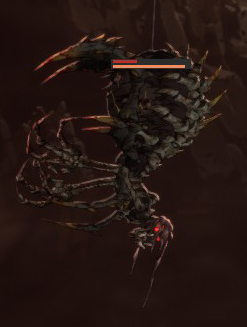 The hanging spider can come down on it's web to greet you. It fires up to three fire orbs towards you. 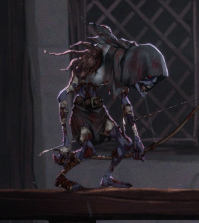 The Archer fires arrows towards you- his range is impressive so be on the lookout for arrows flying your way. 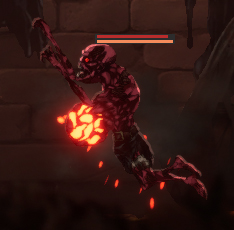 The Ogre would rather explode on you than fight. 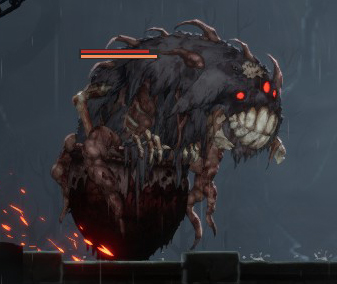 Pot Hiders are mobs that are pretending to be smashable pots. As soon as you hit the pot they will burst out and strike. They hit hard, so dodging through them to get some strikes in is a good way to defeat these. 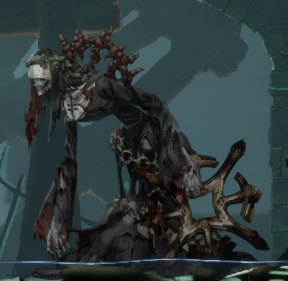 The Banshee will summon a fire storm wherever you're standing, so don't stand still for long. If you get too close, she can also hit you with her Throwing Star. 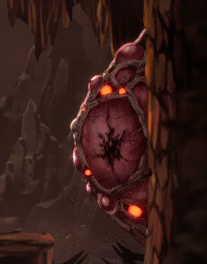 Whilst these don't attack you, they spawn Flies to come and annoy you.

Flies will move towards you to deal touch damage. They give 0 EXP so don't waste your time fighting them. 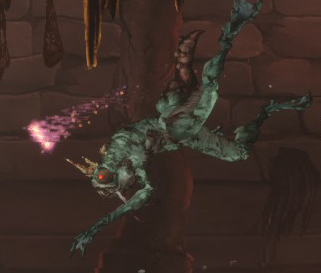 You'll find these guys hiding out in the water where they will dive at you. You can dodge them by diving forward when they do their dive attack. 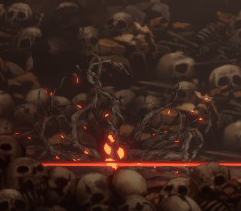 These guys will fire out a single heat-seeking fire orb towards you. If you stand right next to them their orb won't hit you.

The Catacombs begins at D1, which is a Respite. You can pick up a Fretia's Ring Relic that allows you to parry attacks by holding down shift key.

Go right and you'll come to D2. There are several new mobs here which will take multiple hits to take down in the early level 30s. As you level up this area will get a lot easier, so keep persevering!

At the bottom left of D2 you can find 10x Stagnant Blight.

Make your way right to D3. Watch out for the exploding ogres- hit them once or twice and they will start to ignite and hit hard if you get caught by the blast! In the top right of the map is 10x Furious Blight (you'll need to double jump perfectly to get it!). Take the Elevator up to D16.

In D16 you can find an Amulet Fragment on one of the platforms above the several floor spiders. Head right to D17, which is a new Respite. Here you can pick up [FINDINGS] The Next White Priestess.

Head right to D18 where you can pick up 10x Stagnant Blight. Watch out for the Fly Pods which keep spawning Flies to attack you. Head right and jump into the water. When you head up you can find a [FINDINGS] Defense of the Twin Spires 1. There is a hidden floor between the two Banshee mobs that if you use your Action skill to break Red Pustulant Ground you can pick up 10x Stagnant Blight.

D19 has some flies that can cause you problems so take your time through this level. Keep heading right and you'll eventually come to an Elevator that will take you down to D6, which is a Respite. Here you can pick up [FINDINGS] Silva's Note 1 on the left. Now head right to D7. 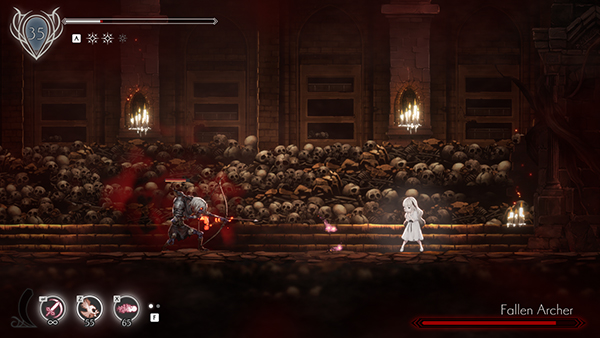 The most trickiest part of Fallen Archer's fight is that he has an incredibly long-held arrow shot that can put you off. He holds it for around 3 seconds, so timing your dodge is going to be crucial to surviving this fight.

Apart from that, this mini-boss shouldn't pose much of a threat. Once defeated, you'll get the Fallen Archer Spirit Skill.

In the left corner of the fight with Fallen Archer is a Priestess' Wish. You can also pick up a Chain Of Sorcery in a hidden area on the right of the map.

If you head back to D7 and climb up onto the platforms, you'll find a Amulet Fragment in a pot. There is also a [FINDINGS] The Last Heirloom of Land's End. If you go all the way right and jump from the top most platform you can find a hidden wall which contains 10x Stagnant Blight.

Head back to D6 and this time head down to D9.

You can pick up [FINDINGS] Silva's Note 2 on your right. If you keep going right, in the water is 10x Furious Blight.

Now head left and jump up onto the platforms. You can pick up 10x Stagnant Blight on a platform at the right. Now head left to D10.

Jump down to the bottom right of D10 and then use your Action Giant's Hammer to smash through the skulls on the ground. This will reveal an Amulet Fragment.

In the middle of the map, there is another area you can use your Action Giant Hammer to smash through the skulls on the ground which reveals a lever. Pull it and then head back to the water you just passed and swim down. It will reveal a hidden entrance you can go down to D15.

In D15 you can pick up 2x Ancient Souls which can be used to upgrade your Umbra Warrior Spirit. Head back to D10 and climb all the way up to D14. 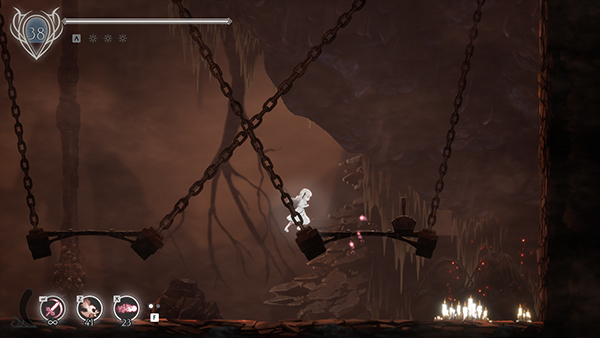 In D14 you'll find several levers hidden in pots, so make sure you destroy everything. The levers will activate Elevators, allowing you to go to the top. You can pick up an Amulet Fragment on the second level in a pot on the left. At the top of the level, head right and watch out for the exploding ogres. There is a Chain Of Sorcery on the top-most platform in a pot. Make your way up to D4.

In D4, you can pick up 10x Stagnant Blight at the top platform on the right. Before going to D5, head upwards to D17 to open up the closed gate and use the Respite. You can also use this time to upgrade any Spirits you have.

Head back down to D10 and go left to D11, which is a new Respite. You can find [FINDINGS] Defense of the Twin Spires 2. You can pick up the [FINDINGS] Fretia's Memoirs 4 on the right. Use the Elevator to go up to D13.

In D13, you can find a [FINDINGS] Fretia's Memoirs 2 on your left after smashing down a wall. Now head right and you can smash down a wall to find a Treasure Chest containing the Relic Kilteus' Ring, which slightly reduces cooldown time on skills. Take the Elevator up and head right. You'll find a hidden wall, which contains a Banshee and the [FINDINGS] Fretia's Memoirs 1. Finally head left and up to D3.

Make your way to D2 and look out for the Red Pustulant Ground on the left. Break through it and you'll find yourself in D12, where a new mini-boss lays waiting for you. 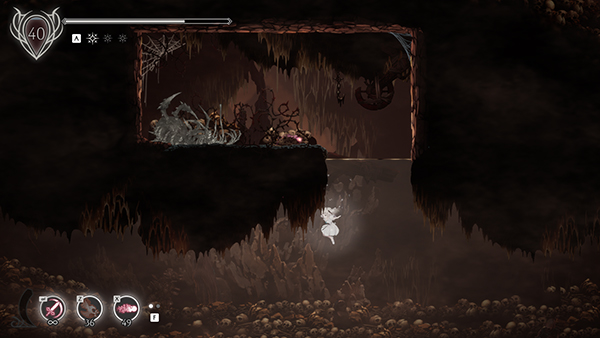 First go left and jump into the water, taking out the Frogs and Plants. Then float upwards underneath the earth to reveal a hidden entrance to find 10x Stagnant Blight. Go left and you'll come across... 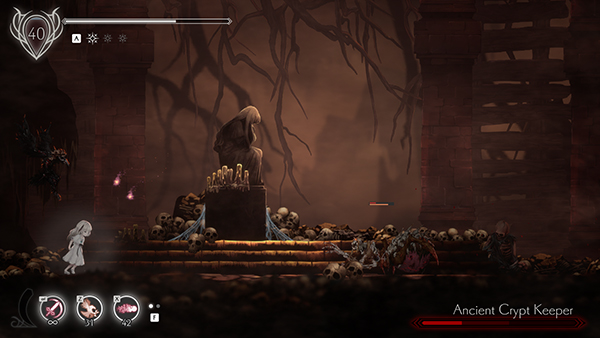 A fairly easy fight; his special move is a wide shot that can stun you for a few seconds. At this point you should be high enough level to take him out in a single life.

Ancient Crypt Keeper gets added to your Spirit skills once defeated.

Now go right and use the Respite in D11 to teleport to The Great Hall at D17. Head down to D4 and then finally to D5 where you can pick up [FINDINGS] Unfinished Note. 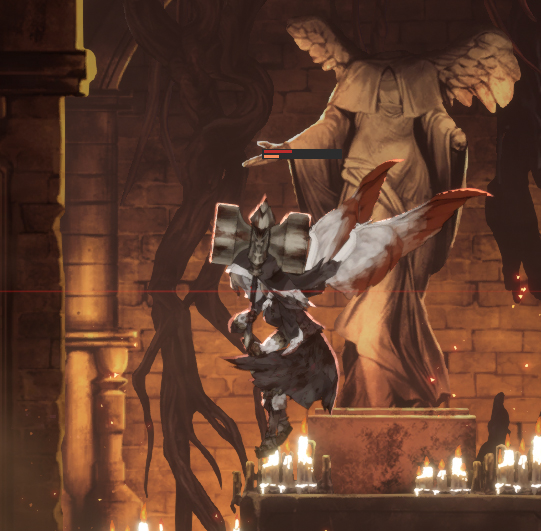 The final boss of Chapter Four is Guardian Silva, who has three phases.

The first phase has two main attacks to look out for: A volley of heat-seeking fire arrows and two-hit hammer slam attack. Both are easily dodged; just work on the timing of those Fire Arrows.

The second phase begins at 2/3rds of Guardian Silva's HP. Not much changes in this phase apart from Silva can teleport across the map to fire the arrow volleys.

Third phase begins when the HP reaches the last 5% and she transforms into something hideous. In this mode she has several new attacks: a Rush attack than runs towards you. She can also shoot out a giant spinning orb (easily dodged) and several melee claw swipes that you need to be careful of. She will also periodically float into the air and four red beams will come down- causing a huge area of attack that will hit hard. In reality, this phase is quite easy if you can get out of the way of the big AOE skill.

Check out this video guide for more help:

That wraps up Part Four of the ENDER LILIES Walkthrough! Let us know how you found the Catacombs and whether you found the final boss challenging.

In D10, you don't use giant's hammer to break bone floors. You just drop down like a platform. Wasted like 15 minutes trying to break the floors...