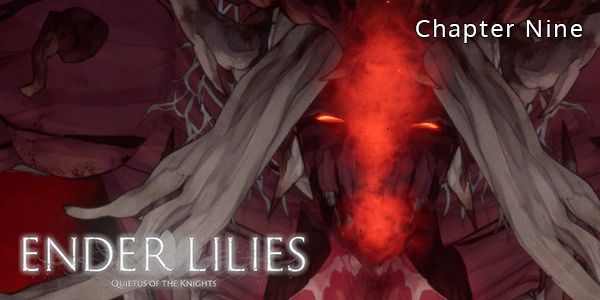 Chapter Nine is the final chapter of Ender Lilies, allowing us to complete the game and reveal the true ending! Chapter Nine will take you into The Abyss and also allow you to find every single secret, item and objective to have the final complete map of Land's End.

After defeating Miriel, the Beloved in Chapter Eight, we now have access to the Unlock Action ability, allowing us to visit the final few maps in the game. We also can now get the final few out-of-reach items with new Spirit Skills. 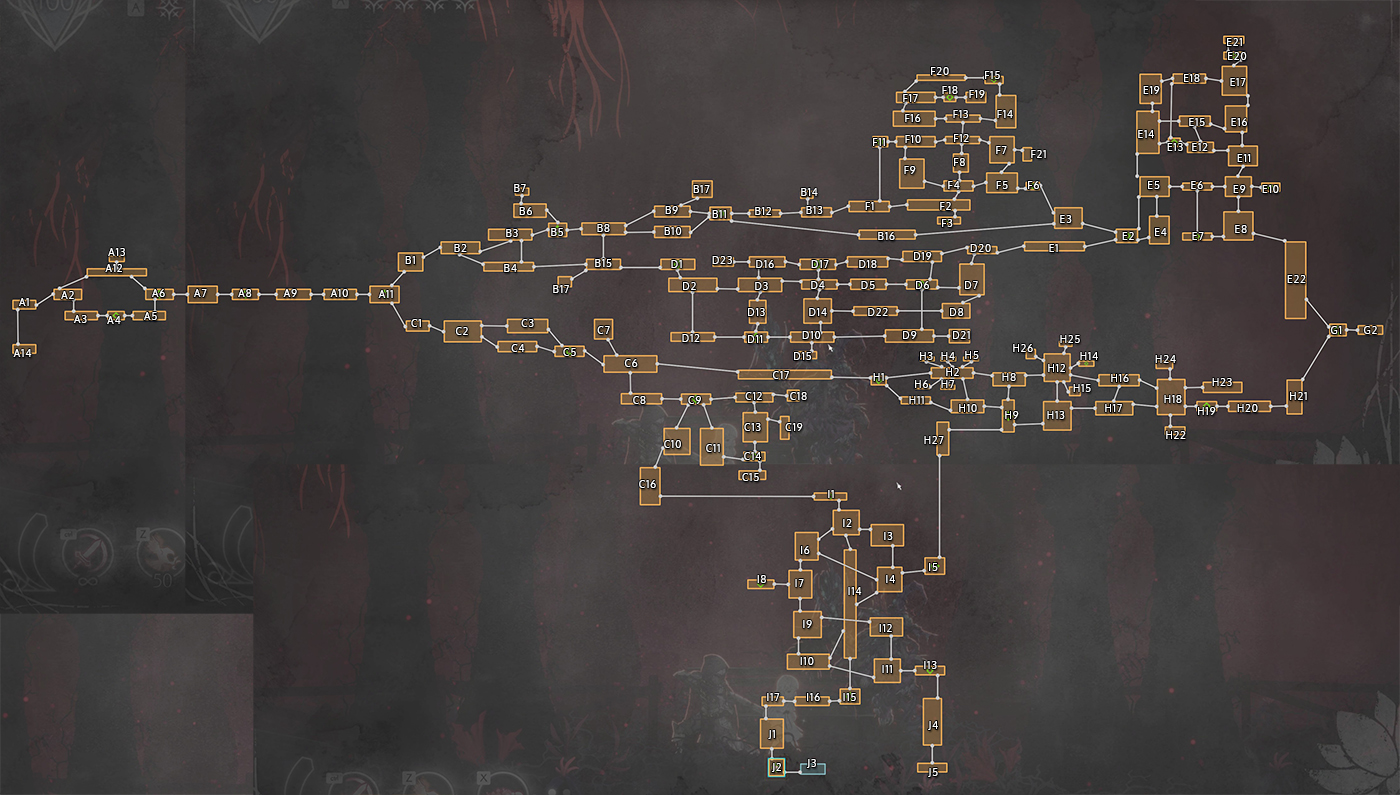 The first thing we need to do is get the final Spirit Skill. You'll want to head I3 and use the Unlock ability to gain access to the mini boss below:

The boss itself is easy, but it's the Spirit Skill we will need in order to get some of the last items in the game.

Verboten Champion skill will give you a small upwards boost when used, allowing you to jump upwards easier. Combine this skill with the Incompetent Sinner and you can get to every single platform in the game. 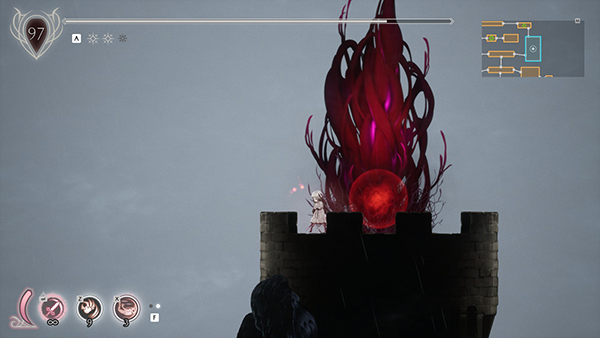 You can pick up another 800x Furious Blight using a combination of Verboten Champion, Incompetent Sinner, double jump and Glide in D1 to the very right of the map.

If you go back to the very first map A1 you'll notice there is a locked door on the left. Unlock it and you can take an Elevator down to A14 and pick up [FINDINGS] Restoring the Aegis Curio. If you read this Finding it states you need to collect the seven pieces of the Stone Tablet. These are all hidden behind the Locked Doors.

Head to F7 and on the right of the map is a door you can unlock. Once inside F21, you'll find [FINDINGS] King of the First Age's Diary 3 in front of you. Head down the stairs to pick up 100x Stagnant Blight and a Stone Tablet Fragment.

Head to E15; in the middle of the map you can find a hidden Elevator that takes you upwards by jumping down to find a lever in the middle platform. Once the Elevator takes you upwards, you can then use Executioner's Hook to swing all the way to the top of the map. Jump into the water and Unlock the door to find 800x Stagnant Blight and a Treasure Chest containing Stone Tablet Fragment. You can also pick up [FINDINGS] Writing On The Wall.

Next up go to B15 and jump down to the bottom left. Use your Piercing ability to break through some hidden Red Pustulant Wall on the left of the map. This will take you to B17 where you can pick up [FINDINGS] Faden's Letter and Stone Tablet Fragment.

Next go back to Stockade and head to H12. Use Executioner's Hook to get all the way up to H25; inside is a Stone Tablet Fragment. 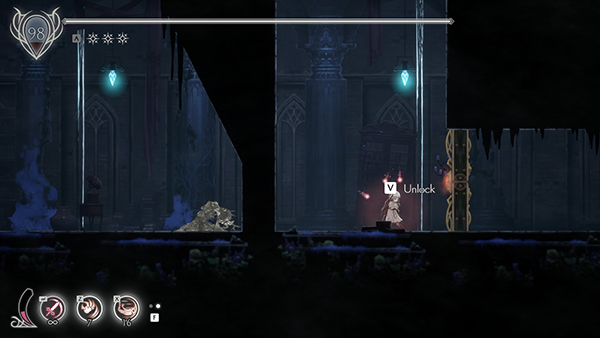 Now go to C13 and at the top right of the map is a tall wall you need to navigate over to get to the locked door. Again, using a combination of Verboten Champion, Glide + Incompetent Sinner will help you out here; you can use the Ceiling points on the left to get up to it. Once inside C19, you can pick up 800x Stagnant Blight and a Stone Tablet Fragment. You can also pick up [FINDINGS] Eleine's Diary 3.

The final piece can be found by going to I13, which is a Respite with a hidden floor. Jump down and on the right is a door you can unlock. Make sure you have your Heretic's Mask equipped before venturing to J4.

In J4, you'll have to go through some Red Poison Mist and dodge mines in order to get to the end. You can pick up 100x Stagnant Blight in the middle of the map. You'll have to swim through poison water too but eventually you'll come to J5 where you can pick up the final Stone Tablet Fragment. You can also pick up [FINDINGS] The Deathless Pact. On the right, you can purify a Blight for a new cutscene and pick up Ancient Soul x2 to upgrade Umbral Knight to max level. 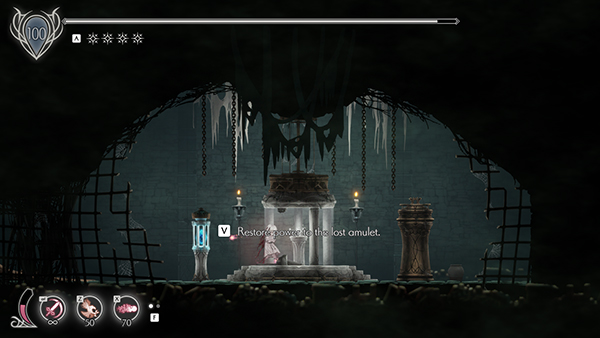 Now head back to A14 where you can merge all the Stone Tablet Fragments together to create the Relic Luminant Aegis Curio. You need to have this Relic equipped when fighting the Final Boss in order to have the True Ending.

You can now go to The Abyss to fight the final boss. This area is quite small, so not much left to do! 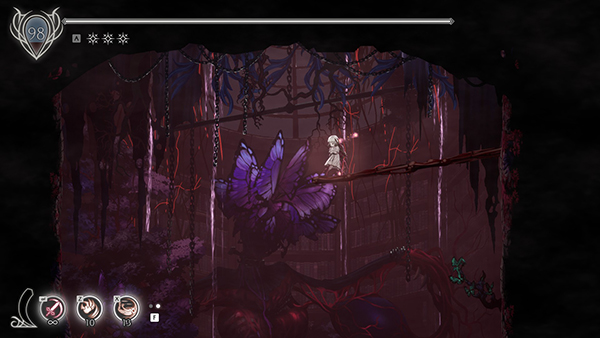 Go to I17; before making your way to the Abyss you can collect 800x Stagnant Blight at the top right of the map if you use Verboten Champion to climb up the walls. Make your way down to the locked door and pick up [FINDINGS] Faden's Archives 5 and then the Elevator to J1.

In J1, the path is quite linear so just head right to pick up [FINDINGS] Silva's Blight-Stained Note 1. As you head down you'll pick up 100x Furious Blight on the right. You'll eventually drop down to J2, which is a Respite before the final boss.

You can pick up White Priestess' Earrings Relic on the left and [FINDINGS] Silva's Blight-Stained Note 2 on the right. On one of the platforms you can pick up [FINDINGS] Fretia's Memoirs 5. On the top right of the map is an Amulet Fragment you can get to by using Glide. 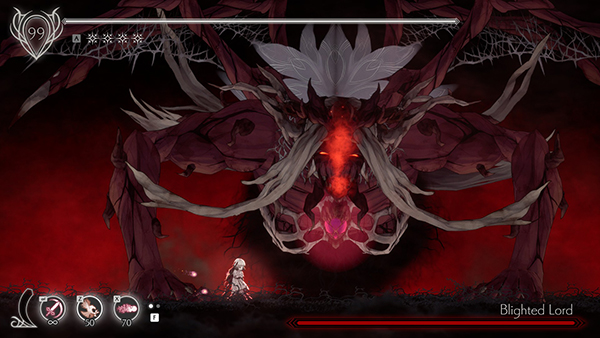 Assuming you have all the pieces of the Stone Tablet and have equipped the Luminant Aegis Curio Relic, the Blighted Lord has two rounds you'll face. Otherwise, you'll just face the first form of the boss.

The first round the Blighted Lord has three phases you'll have to deal with. The Blighted Lord will constantly summon those Floating Fish mobs; the trick is to make sure you're dealing with those all the time before concentrating on the boss. Usually, you can attack the boss and the mobs at the same time, but if not, don't let too many mobs spawn otherwise you'll get overwhelmed.

The Blighted Lord will occasionally use it's claws to hit the ground- they don't do much damage so you can ignore them. It will also use a swipe attack to your left or right so it's best to be positioned central.

The second phase begins of round one will begin with The Blighted Lord covers its face with its hands. In this round, the Floating Fish mobs are summoned a lot faster and you'll likely be dealing with two or three mobs at a time.

The Blighted Lord will also stab the ground and create a small fire wave along the floor that you'll need to watch out for.

The final phase The Blighted Lord has one new attack, which is an explosion that it summons in the middle of the map.

Round two will then begin assuming you have the Relic equipped.

Round two is very similar to previous rounds, just that The Blighted Lord will now summon Fireballs to chase you every now and then, but they are easily dodgable. Overall this part of the fight is just more of the same.

Use the video guide below for tips!

After defeating the boss, when you relog in you can pick up the Lost Heirloom Relic in J2.

And that wraps up the end of Ender Lilies Walkthrough! Hopefully this guide helped you out with some of the trickier parts of the game- let us know your overall thoughts in the comments on whether Ender Lilies was challenging enough for you!

How do you get everything in f14? Thanks in advance!

There's something missing from your guide in J2. I picked up both notes, the relic and the amulet fragment and the room is still blue.

you need to do the 2 endings, there's a relic for both

Best game i have ever played tnx for ur useful guide