A new special anniversary set of Pokemon TCG cards has been announced called Pokemon TCG: Celebrations. This year Pokemon is celebrating 25 years and they have already released a ton of special limited edition products to celebrate and now this new Pokemon TCG set is the latest to join the lineup.

Earlier this year we had two other Pokemon TCG products released for the anniversary: The Pokemon McDonalds 25th Anniversary Set, which included 25 reprinted cards in both normal and holo forms.

They also released and continuing to release the First Partner Pack cards, which are gigantic versions of the starter Pokemon from each region (and Pikachu!). 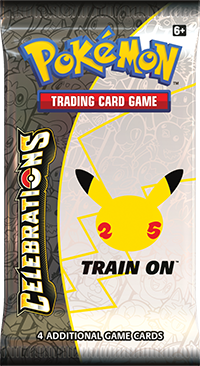 Pokemon TCG: Celebrations is a new set that will contain fan favorite cards including Base Set Charizard, Umbreon Gold Star and Tapu Lele-GX.

The set will come in Booster Packs that contain four cards where all of them will be holographic.

The total amount of cards to collect hasn't been announced, but there will be at least a subset of 25 cards "that are close remakes of iconic cards from the history of the Pokémon TCG".

The Booster Packs for Celebrations will be included in special edition products of Pokemon, including an Elite Trainer Box and other special collection boxes.

Read the full press release below:

Bellevue, Wash.—June 24, 2021—In celebration of Pokémon’s 25th anniversary, The Pokémon Company International announced the highly-anticipated Pokémon Trading Card Game: Celebrations collection, which will showcase beloved characters from the Pokémon franchise, as well as popular card artwork and gameplay mechanics spanning the history of the Pokémon TCG. With nine different products, Celebrations will have something for everyone when the expansion launches starting on Oct. 8, 2021, at participating retailers around the world.

Each Celebrations booster pack will contain four uniquely designed cards—all with foil treatments and a 25th anniversary logo—that feature characters from all regions of the Pokémon universe, from Pikachu to Zamazenta plus familiar faces like Professor Oak. In addition, Celebrations will introduce a special subset of 25 cards that are close remakes of iconic cards from the history of the Pokémon TCG, including Base Set Charizard, Umbreon ☆, and Tapu Lele-GX.

The full Celebrations lineup will include the following, with many of these products including promo cards that combine recently-discovered Pokémon with popular forms from previous Pokémon TCG sets, such as Light Pokémon, Delta Species (δ) Pokémon, and Pokémon Star.

Pokemon TCG have already released both Battle Styles set and Chilling Reign. We still have Pokemon TCG: Evolving Skies set to be released in August too, so Pokemon TCG fans will need to start saving!