Chapter Eight of Final Fantasy VII Remake sees us reunite with a familiar face after Cloud fell to his doom after our latest mission in Midgar.

You begin waking up inside a Church, with the Flower Peddler, named Aerith, standing over you. You must have hit your head pretty hard!

Before you get a chance to do anything, however, you're rudely interrupted by Reno, a member of The Turks group, who work for Shinra.

The battle begins with two simple rounds of Shinra Guards to take out. After you do so, the real battle with Reno begins.

There are two phases to this Reno fight. The first round is easy enough; you just have to guard against his attacks which will stun him for a few seconds, allowing you to get in several hits. Braver hits particularly hard here. Watch out for his EMP Shot; unfortunately you cannot block this attack so you can either try to stun him yourself before the move happens or you'll just have to tank it.

The second phase of this fight will see him summon some EM Mine mobs; they have low health so they can be taken out easily but they also can stun you with their Discharge attacks. Reno will repeatedly summon them throughout the fight.

The same tactic remains in the second phase, just guard against his attacks and it'll eventually leave him open to several attacks from you. 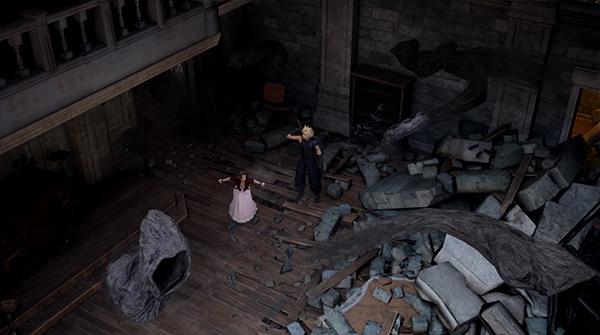 After the fight, the hooded figures force you out of the room and into the back of the Church. Take the stairs up to the 2F level and follow Aerith. There is a staircase that will lead you down to a Treasure Chest containing a Talisman Accessory. 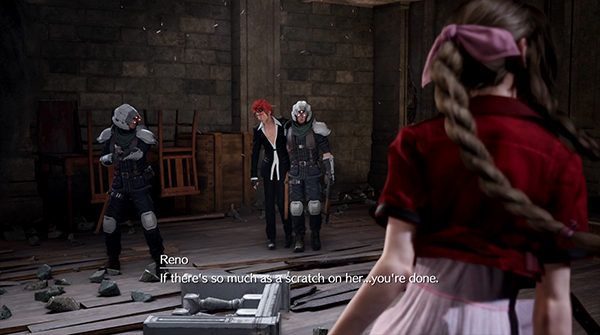 Take the stairs further up and you'll come to a plank of wood. As you go across, Aerith gets shot back down by Shinra Guards. Luckily for us, those Hooded Figures protect us from Reno and his men.

Cloud spots a chandelier you can drop on the guards to help Aerith escape, so go to the marker and climb up to the monkey bars. Head to the Chandelier and Cloud will slice it so it drops. Aerith will make a run for it and then meet you across the other side, so climb across to her.

Next you'll come to fallen bookshelf that you and Aerith move together, before escaping via a ladder into the attic. Reno and his men give up the chase.

In the attic, you can pick up a package of smelling salts from a nearby Treasure Chest. After that, you'll climb across the beams of the church, watching Reno and his men leave.

You'll then come to the rooftops of the Sector 5 Slums. This area is pretty big, but a rather linear and simple path to follow. Our first target destination is the station platform to see if Cloud can hitch a ride back to Sector 7.

As you walk through the Slums, you'll learn some more about Aerith. 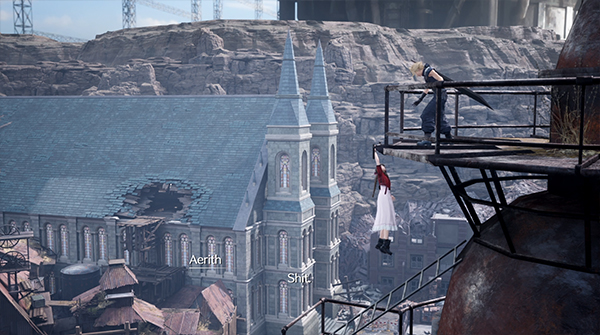 You'll eventually come to an area where Aerith joins your party; Aerith uses magical attacks as her main standard attack; she also has a charge attack that you can either fully charge to deal high damage or release in shorter bursts but lower damage. Aerith is a great supporting character to your party with her healing skills.

You'll come across a new mob called Hedgehog Pie, which are weak to Ice attacks.

Follow the linear path and you'll eventually reach the station. There is a Vending Machine at the end of the platform and a rest bench. You can also buy the Music Disc #21 - Cait Sith's Theme.

You decide to take the backstreets after seeing another member of the Turks.

Follow the linear path and you'll come to an area with locked metal gate that doesn't work. This activates a new Discovery Quest called "The Gate Won't Open".

If you head to your left, you'll find a container unit that Cloud can push aside to allow you and Aerith to move through. Follow the path round and you'll come to an opening with a ladder. 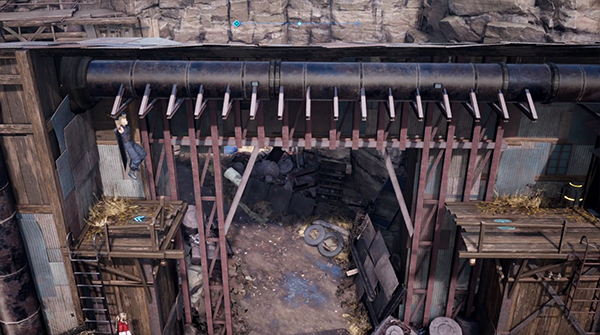 Climb up and pick up Treasure Chest (4) by going to your right and using the monkey bars to get to the platform.

Now head up the right path, up metal stairs and follow the linear path where you'll come to a view of Sector 5 Slums - Central District. Aerith mentions you need to try her mom's cooking, so looks like we're heading back to Aerith's place.

Check your map to see the location that you want to head in; you'll want to head towards the area that was previously inaccessible through that metal fence gate (the path is pretty straightforward, but has a few dead-end branching paths).

You'll know you've come to the right area when you face up against a new enemy type called a Smogger. These robots are weak to Thunder magic; but be careful- once they die they also have an explosion post-death. 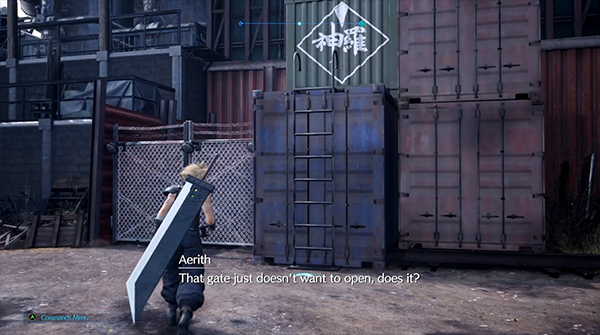 The path is blocked by a locked metal gate, so you will need to use the ladder to climb up to a green container and push it.

This will then allow Cloud to monkey-bar swing across onto it, jump down to the other side and open the gate for Aerith to pass through. 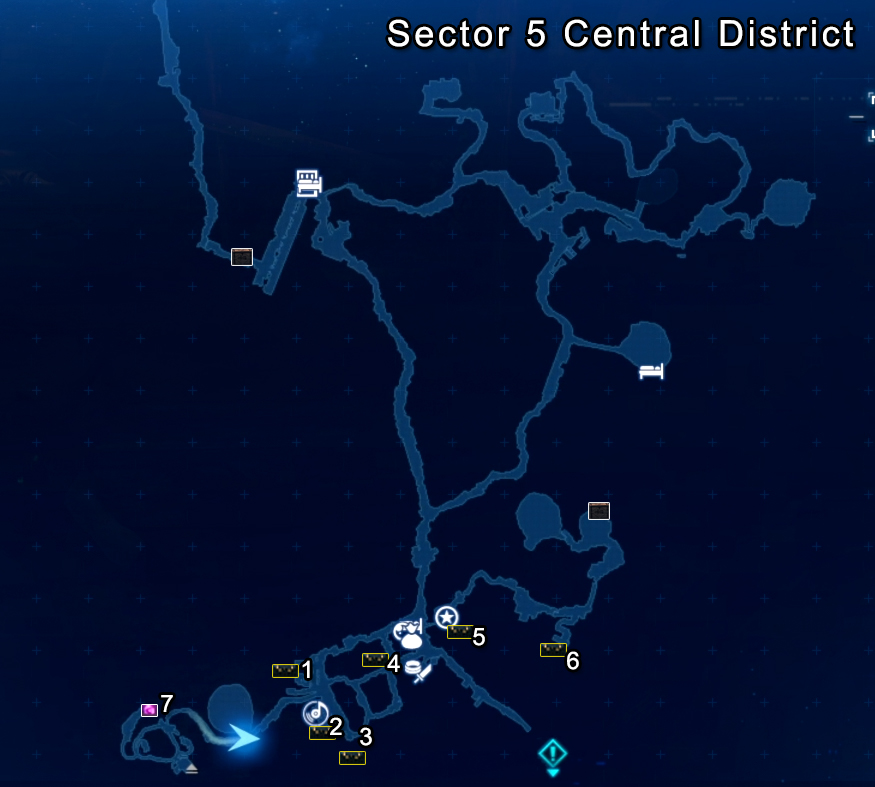 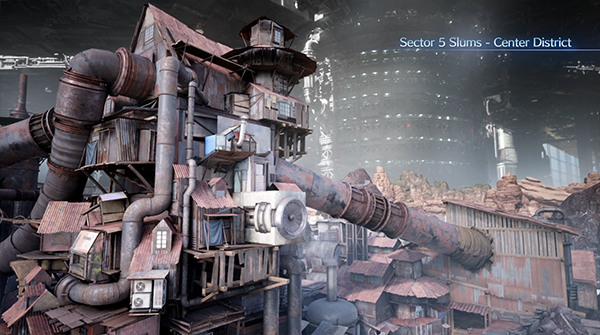 You can now head to Aerith's home, Sector 5 Slums - Central District. As you arrive, there is a commotion up ahead as everyone is watching a news report of Avalanche's latest attack.

Follow Aerith through the Slums and you'll eventually come to a lady who looks after many of the children in the slums in a place called The Leaf House.

She asks you to bring her some flowers. If you go inside her school, you can find a Treasure Chest (1) containing an Ether.

Follow Aerith to her house, where you'll meet her mother Elmyra. She recommends you stay the night and then Aerith wants you to help deliver the flowers to the Housekeeper lady.

You can pick some flowers outside of Aerith's house. Once your basket is full, head back to the Housekeeper lady (The Leaf House), where Aerith goes inside and leaves you on your own to explore.

Before you go fully explore, we recommend completing more of the story to unlock additional side quests. 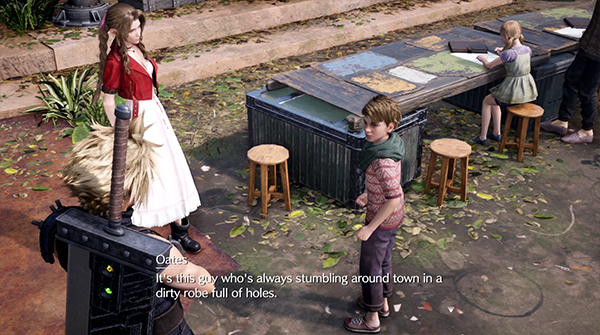 First, find the boy in the center of the Central District. He will go to find Aerith at the school (The Leaf House) - head back there and the kid named Oates tells you of a spooky figure with a hood wondering around.

Aerith recommends checking it out, so follow Oates through the slums to find his hideout.

Danger In The Hideout

When you arrive at the hideout, the kids tell that some of their friends are in trouble. 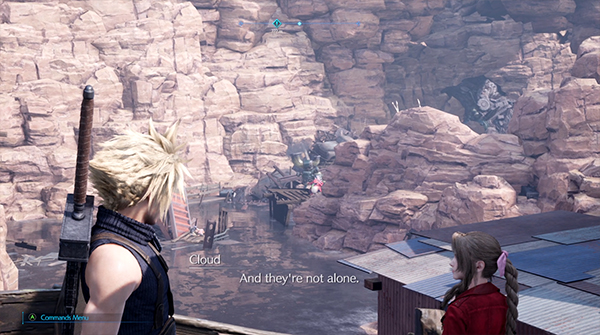 Follow the linear path, fighting through a bunch of monsters on your way. You'll eventually come to a bridge where you can see two children stranded on a raft and being cornered by monsters.

Head towards them and you'll have to take out a bunch of Hedgehog Pies and Smoggers.

The Smoggers can pose a real threat, as they can rampage and deal tons of damage. A couple of Thundara can take them out though.

Once they've been defeated, you can rescue the kids and head back to the Hideout. Oates hands you a Handmade Necklace as a thank you but before you can leave, a hooded man shows up.

This causes Cloud to have a vision/hallucination where Sephiroth shows up again. It doesn't last long, however, Aerith does mention that she heard Sephiroth died 5 years ago...

You can now take on the side quests in the Sector 5 Slums! Much like the ones in Sector 7, these are all optional and don't really alter the gameplay very much. If you're a completionist though, you'll want to take on these quests!

Check out our Side Quest Guide for more information on how to complete these quests.

Now is also a great time to talk to Chadley and look into his Battle Intel Reports as you can now acquire a new Summon - Shiva. 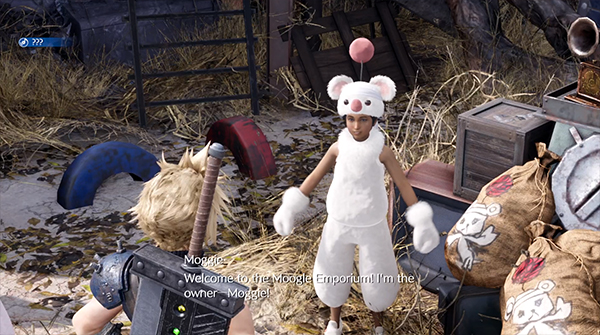 In the hideout, you'll also unlock the Moogle Emporium- a place where you can spend any of your Moogle Medals. In order to access the shop, you must first purchase a membership for one Moogle Medal. This will also complete the Mysterious Moogle Merchant side quest.

To continue the main story, head back to Aerith's home. On your way, you'll be interrupted by Rude, one of Shinra's Turks. 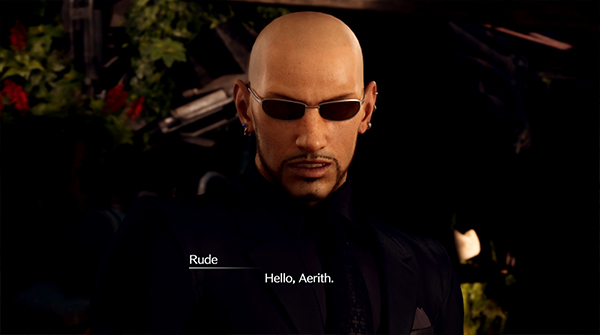 Like Reno, there are two phases to this fight. Luckily, you have Aerith on your team to help you out this time.

To start the fight, have Cloud guard against Rude's attacks and time it right to get a few slashes in. He can use a binding move called Seize- at this point you should switch to Aerith to get her ATB up. You can store it for later and use healing spells to help out when the battle get's more intense.

At about 60% HP, Rude's second phase starts. He has a new move called Shockwave, which is easy enough to dodge as you can see it coming towards you. If you use Aerith too much, he will cast sleep on her to make her unusable.

The best tactic for this fight is to be constantly switching between Cloud and Aerith; once he targets an attack, switch players and get more shots in. This way you're not constantly stuck behind stuns and Rude's barrage attack moves.

Cloud's Braver should be used for damage and have Aerith use Pray and Cure when HP gets low. If you get Cloud's Limit Break, that can easily finish off Rude too.

Check out the video below for more boss fight tips:

After the fight is over, Rude takes his leave and allows you to go back to Aerith's house. You can pick up some MP UP Materia at (7) now also.

If you finished all the side quests, you'll unlock a Discovery Quest called The Language Of Flowers special scene between you and Aerith.

Unfortunately, back at Aerith's house, Elmyra asks you to leave during the night without Aerith noticing. 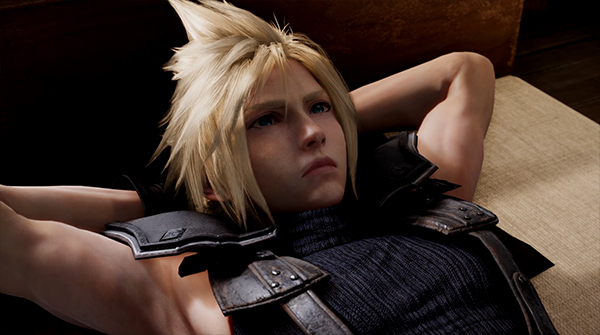 After a short cut-scene of Cloud reminiscing about his own mother, you then have a little mini-game of trying to sneak out the house without disturbing Aerith. After the third time, all the debris are removed, making it a lot easier.

To make your way home, you need to cut through Sector 6. It's located on your map. But, Aerith is already there waiting for you.

That wraps up Chapter 8 of Final Fantasy VII Remake Walkthrough. Let us know if we missed anything in the comments!