After the destruction of Mako Reactor 1, we find ourselves stuck in an underground passageway with our Avalanche buddies. In Chapter Two of Final Fantasy VII Remake, you'll spend the bulk of your time in the Business District of Sector 8 at the top of Midgar.

We begin this chapter inside the Plate Partition - Interior; follow Barret, Jessie, Biggs and Wedge through the rubble. 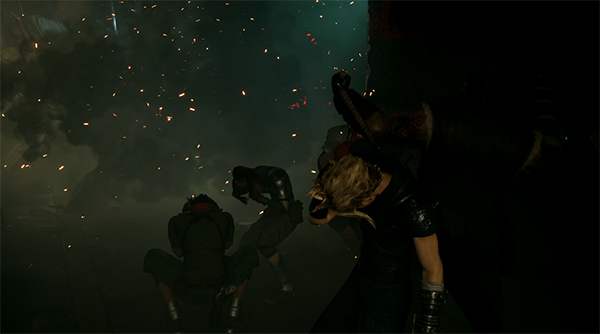 You'll come across a Treasure Chest with two Potions; follow the guys until you get to an area where Jessie plants a bomb to break you out into the Business Sector.

At this point, everyone splits off and you're told to meet inside the cargo carriage of a train. 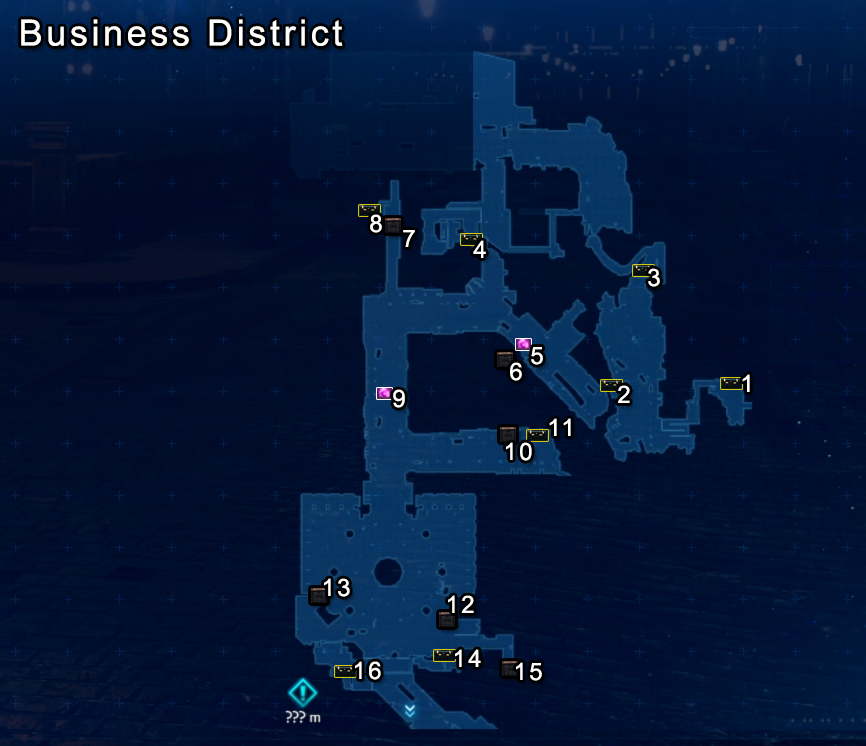 In the Business District, you can find the following items:

The Business District has been torn to shreds after the Mako Reactor Explosion. The area is pretty easy to navigate, but make sure you pick up the collectables outlined above. 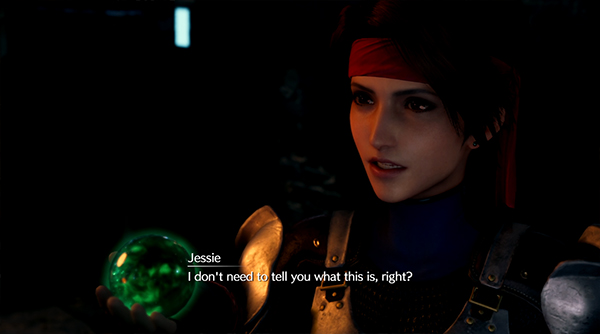 Before you set off, Jessie gives you some Healing Materia and gives you a quick tutorial on how to equip Materia.

Materia can be added and removed from your equipment. Each piece of equipment has a different amount of Materia Slots. You'll find stronger weapons as you progress in the game that give you more slots.

Your Materia will unlock new abilities as it gains more AP. AP is given to you as you defeat enemies.

You can see what abilities each piece of Materia offers in the menu screen. For example, Fire will unlock Fira and Firaga as you increase the amount of AP it has earned. AP stays in your Materia even if you unequip it, allowing you to add it to other characters in your party.

Equip the Healing Materia to Cloud so that you now have access to the Cure ability. 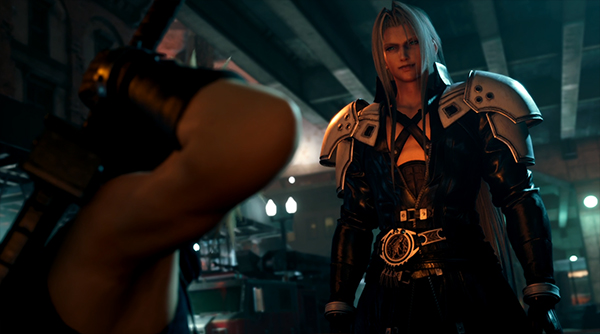 Head further on up and short cutscene will play out in which Sephiroth appears. Follow after him into a burning alleyway.

After an interesting interaction, Cloud regains control of himself and you're in a new area in the Business District. The station is blocked off, so we'll have to find a detour. 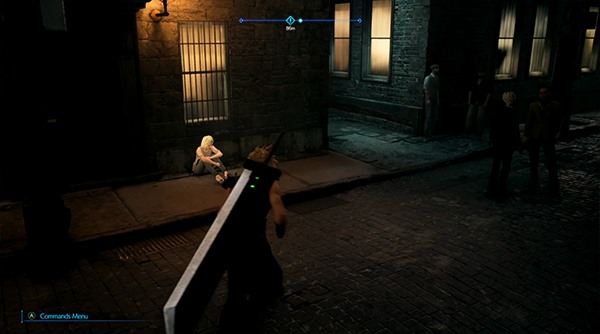 Head through the alleyway on your left and you'll take some stairs to a rooftop. Collect the Treasure Chest (4) and then use the roof fire escape ladder to head back down.

You'll end up at Loveless Street; to your left our some Shinra Security Guards and you might also spot some Materia on the ground. We'll be able to get that shortly but first your chance meeting with the Flower Peddler. 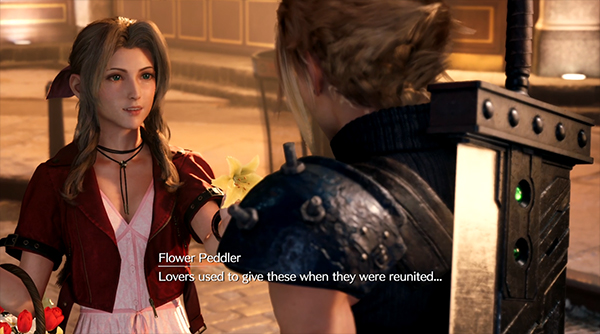 She gives you a flower and soon is chased away by hooded ghost monster things. This also alerts the Shinra guards and so it's time to fight.

Once you've taken care of those guards, head back to where the Materia (5) on the floor was. Fight the guards surrounding it and then pick it up to receive HP Materia. This increases your MAX HP when equipped. You can also find a Moogle Medal in the Shinra Box (6) nearby.

Head to the alleyway that the Flower Peddler ran off to, and you'll find a stash of boxes (7) and a Treasure Chest (8). 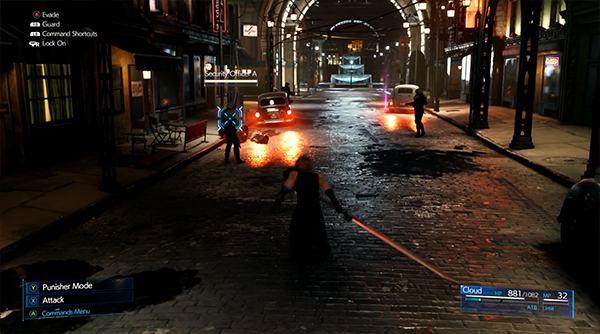 Turn around and head down the path; you'll see some Materia (9) on the floor you can pick up after dispatching the guards. Be careful of those Grenade guards; they have low HP and can be taken out easily but they shoot explosive grenades that can stun you.

If you head down the street to your left you'll find a guard and two dogs. Defeat them and then open up the Treasure Chest (11) for a pair of power wristguards that you can equip to Cloud to get 5% strength boost. 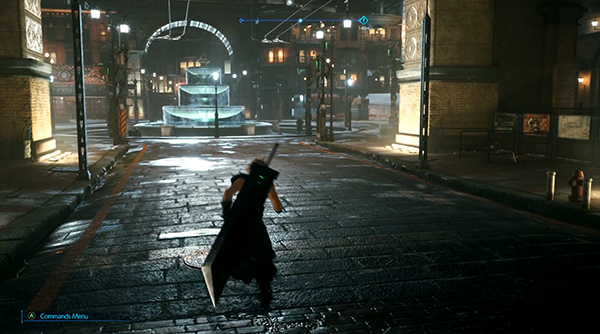 You'll come to an area with a fountain at the center. Take out the guards; two Shock Troopers will come from a Helicopter but they're easy enough; they're weak to Fire. You can find some Boxes (12) (13) (15) in this area and also a Treasure Chest (14). Next to this chest is a ladder that you need to go up.

Head across the rooftops until you come to Treasure Chest (16) and find an Iron Bangle you can equip to Cloud. Take the ladder back down to the new area. 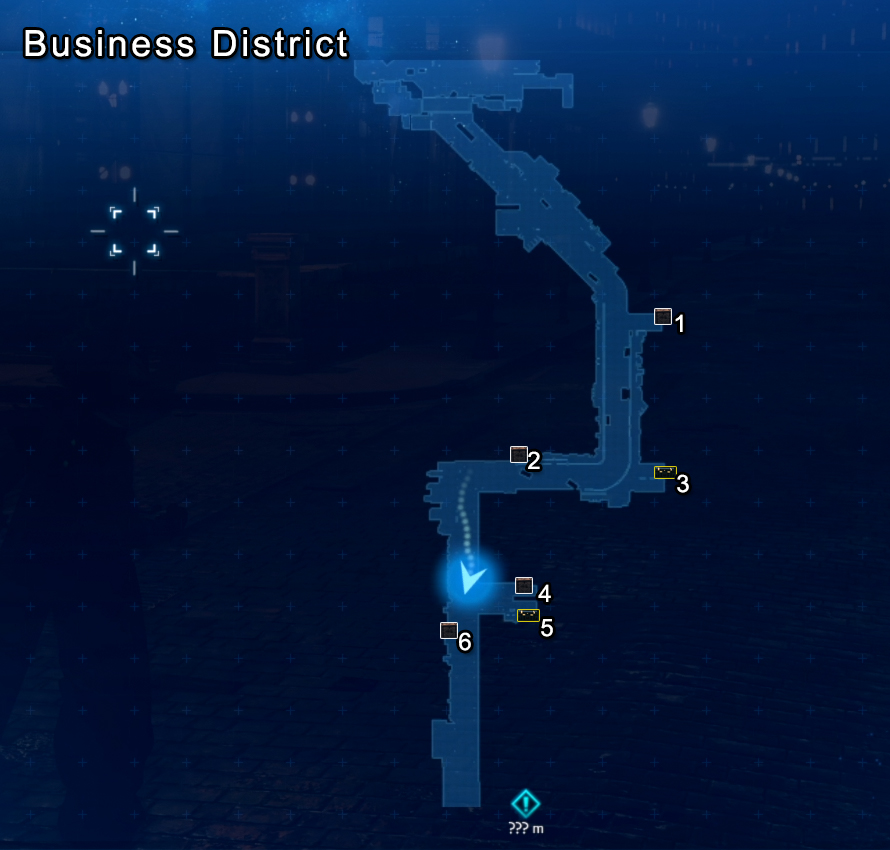 Here you can find the following items: You'll immediately have to deal with some guards and a new type of enemy: Riot Trooper. These block all attacks from the front; you can take them out with Fire Materia or dodge around them and attack them from behind.

Head down the streets and you'll be greeted by several rounds of enemies, including the new Riot Troopers. Once you reach the end of the street, you'll have a mini boss fight to deal with... This fight doesn't really feel like a boss fight.

You face two rounds of enemies and then The Huntsman who is really just an overpowered Riot Trooper. Use the tactics as before; take out Riot Troopers with Fire Materia, and build your AP by slashing at the other Shinra Security guards.

Focus on the weaker enemies first until your left with just The Huntsman. He has a weak spot where he lunges at you, allowing you to get in some hits. However, you can also use Fire on him and it will stun him for several seconds.

When The Huntsman is staggered, use Cloud's Braver move.

After defeating The Huntsman, Cloud makes his iconic escape onto a runaway train. You reunite with the rest of Avalanche aboard the train heading to the slums. At this point, there's nothing much more to do apart from speak to the members of Avalanche as they traverse the train. You'll get some more insight into Barret's motivation and a good look at how Midgar is structured.

That wraps up Chapter Two of Final Fantasy VII Remake! Let us know how you got on in the comments section.