After leaving the bizarre world of Don Corneo's Wall Market, you find yourself deep in the Sector 6 Sewers during Chapter Ten of Final Fantasy VII Remake.

You can choose between waking up Tifa or Aerith first; each one will give you a different cutscene depending on your choice. But they both lead to the same outcome... 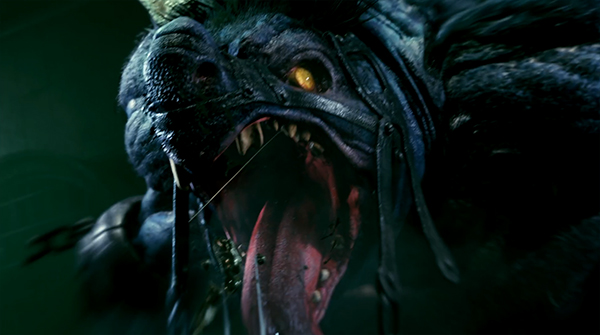 Chapter Ten gets off to a quick start with the boss fight against the Abzu beast.

It has two glowing horns that you can attack; you can cripple one or the other.

In the first phase of this fight, you'll want to use your dodge ability to move around Abzu and try to attack him primarily from behind. His Ground Pound attack will hit anyone close near him and he will often use his Charge attack that can deal around 500 HP damage too.

Watch out for his Backwash Spout too- which is a tornado of water that follows you.

Periodically Abzu will jump onto the walls on the arena and use Pounce, which will bind the character he lands on for a short period. Aerith is great to switch to here as her ranged attacks are the only one that can reach him.

Abzu is weak to Fire magic; whilst it won't do much damage, if you aim it at it's horns, it will catch Fire and damage cause Abzu to lose control.

At 50% of HP, it will go into Enraged mode. Here it can use two new moves: Triple Charge and Blackwater Blast.

Blackwater Blast causes sewer water to enter one half of the arena, so you'll want all your characters moved to the side that isn't affected.

Have Tifa and Cloud focus on Melee attacks to deal damage, using Aerith's Pray skill to heal everyone in the party at once.

Watch the video below for more tips! 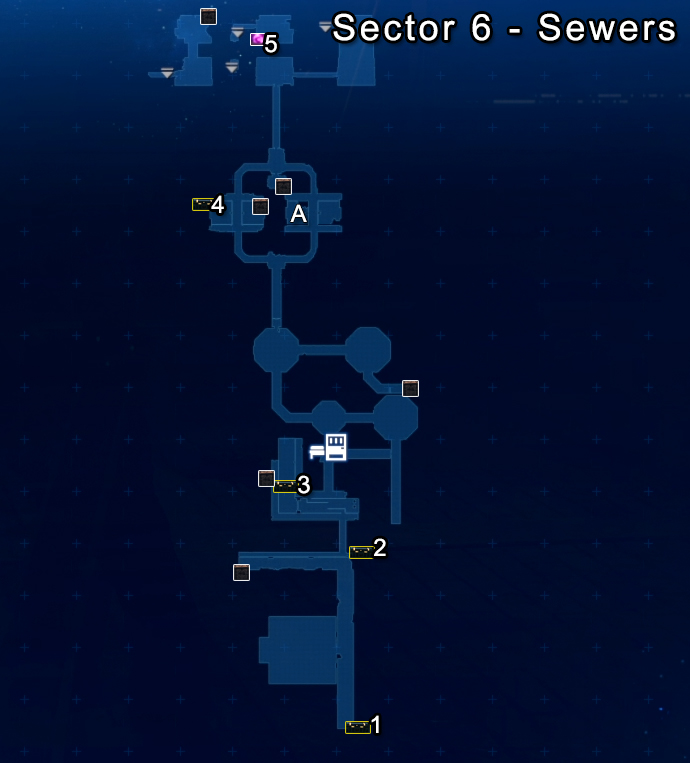 The battle will end with Abzu running off, creating a hole in the sewer walls, allowing you to escape. Tifa mentions you can use the sewer tunnels to get back to Sector 7, so you're going have to navigate this simple maze to get out. 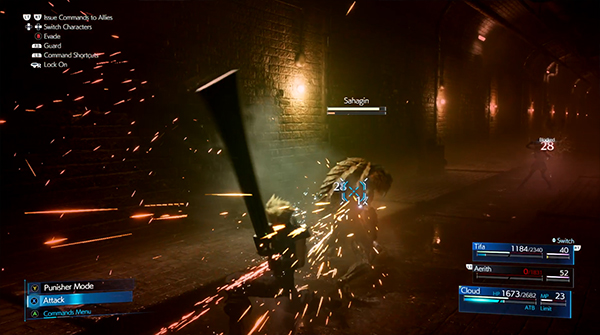 These sewers are home to a new type of enemy called Sahagin. They are weak to Fire element and it can be used to stagger them rather quickly. Watch out for their powerful Jump attacks though, as they can deal some hefty damage. 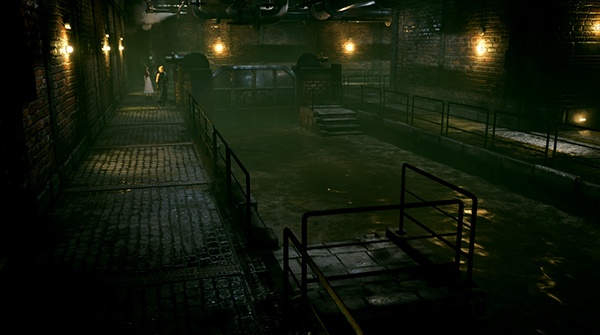 You'll want to follow the waterway tunnel round, climb a ladder, pick up Treasure Chest (2) and you'll come to an area that is flooded.

Hit the switch to drain the water so you can cross (don't forget to pick up Treasure Chest (3) to claim a new weapon for Tifa).

When you make it across to the other side, you can climb down to a new room with a Vending Machine and a Rest point. Here you can purchase Music Disc #09 - The Oppressed.

Make your way further down into the Sector 6 Sewers and you'll come across several clusters of mobs, including a new Scissorclaw, which is weak to Ice element. They have the Guard ability, which prevents Melee attacks so use Magic during this time. 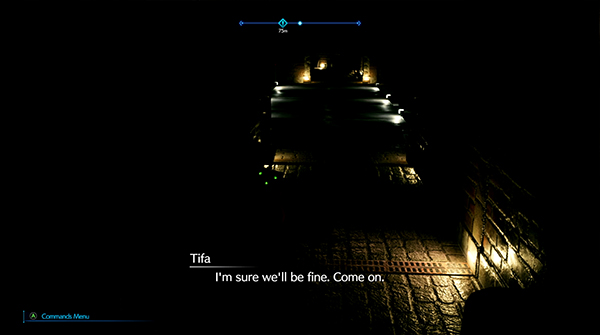 You'll eventually come to an area that has very little light. If you work your way around the sewers, you'll come to a locked door.

There is a room opposite this locked door that will allow you to turn the power on and the lights.

Tifa mentions that Jessie has hid a key in the sewers. You'll need to drain the water by pressing the green buttons next to the sewer canals.

You can find the key at (A); the other sewer contains a Treasure Chest (4). 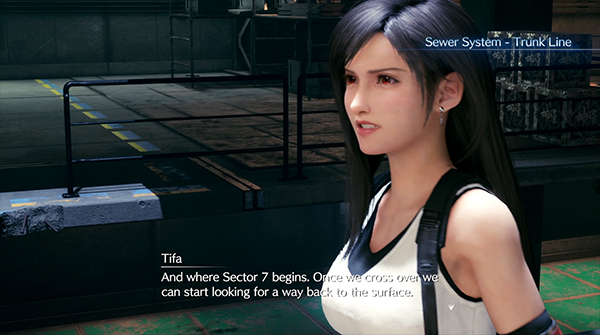 Use the key to open the locked door and you'll come to the Sewer System - Trunk Line. 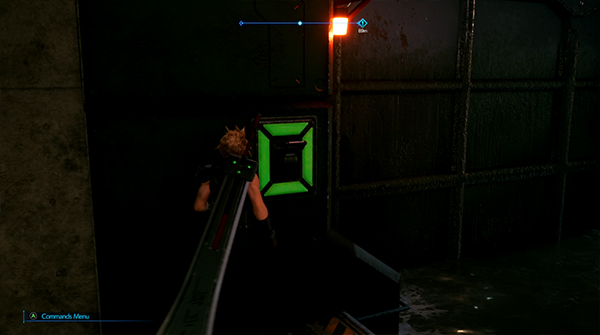 Head to your right and you'll come to several mobs; take them out then use the ladder to climb down to find a green switch you can use to empty the water in the sewer beside you. Take out the mobs in this area, climb under the sever door and up the ladder on your left after taking out more mobs.

Use the switch to close the door and then climb further up. You can pick up some Materia (5) on your right. 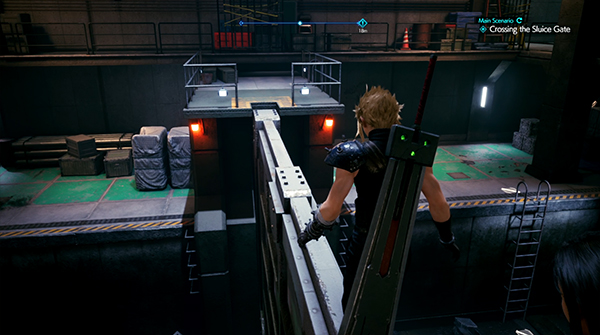 Head left to slowly walk across the closed door.

You'll then need to climb back down, where you'll come across another Sahagin mob. 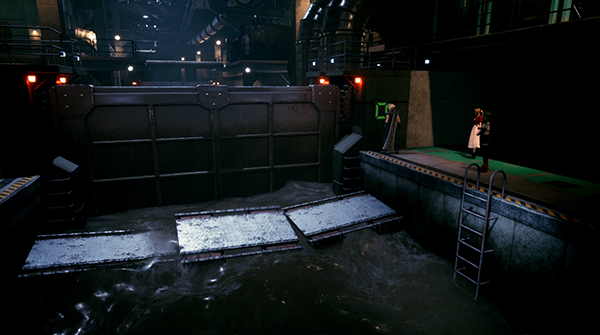 Climb out to your right and press the green switch to fill the sewer up, causing some panels to float up, allowing you to cross. 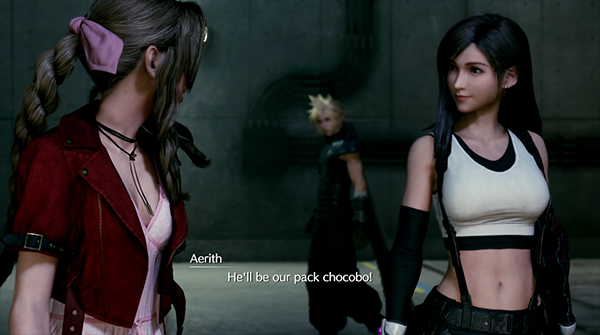 You can now reach the Sector 7 Sewers after Cloud almost falls to his doom again. 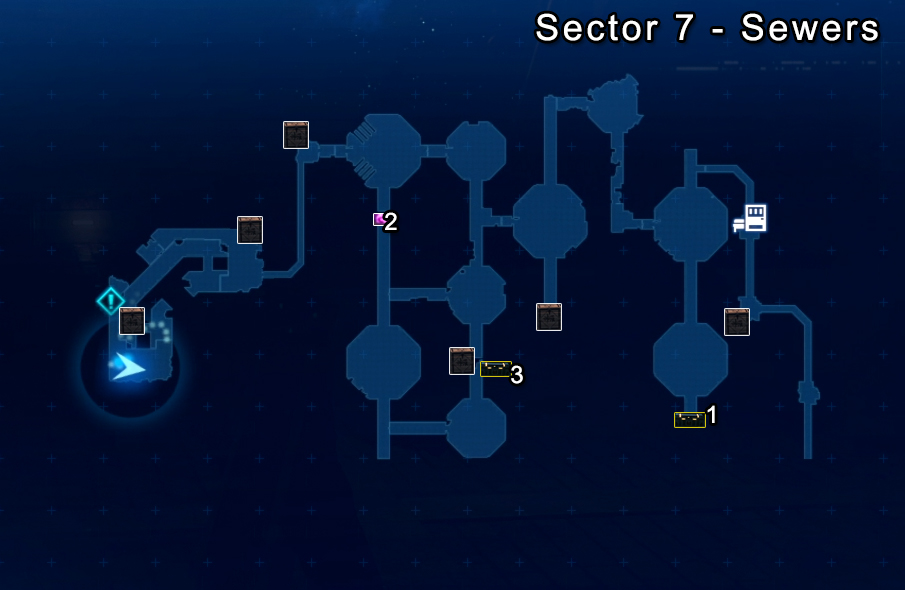 You'll come to a Vending Machine and a Rest bench early on, so heal up. This area is quite linear if you follow the map above; it's filled with plenty of big rooms that come with a batch of mobs each.

You can make a small detour to pick up some Warding Materia (2) and Revival Earrings (3). 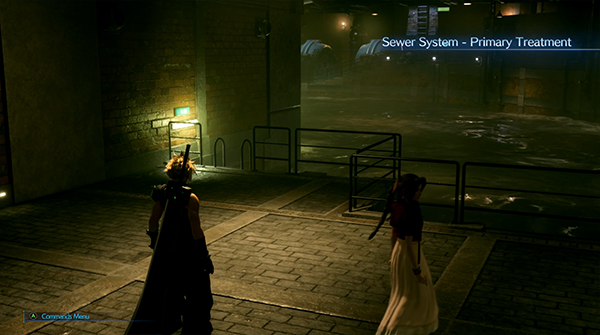 Eventually you'll come to the Sewer System - Primary Treatment area. There is a building on your right that contains a switch to drain the sewer. Unfortunately, there is a blockage. 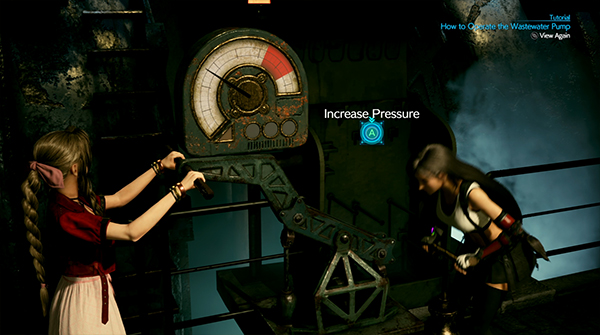 You'll get brief control of Aerith and Tifa as they attempt to unblock the sewer using a small mini-game.

You will need to have Aerith open the Pump, and then smash the A key for Tifa to widen the red area on the gauge. Aerith will then release the pump and you'll have to time the arrow on the red slice for clear the blockage.

You'll have to do this three times! 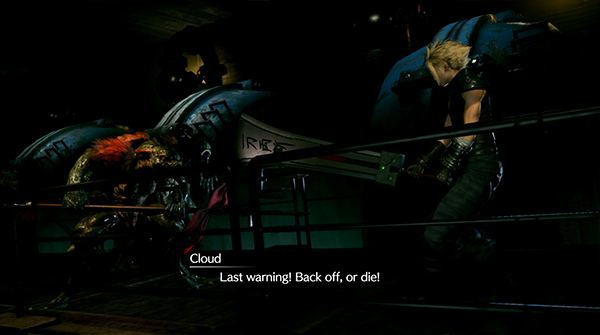 You can now use the switch to drain the sewer.

As you attempt to leave, you'll be attacked by several rounds of Sahagin- remember, they're weak to Fire magic and can be easily staggered by it.

That wraps up Chapter Ten of Final Fantasy VII Remake! This is one of the shorter chapters in the game. Did we miss anything? Let us know in the comments.