After successfully evading Midgar Security, we arrive at Sector 7 Slums via train. At the start of Chapter Three, it's time to get paid and Barret tells you to meet him at his home bar called Seventh Heaven. 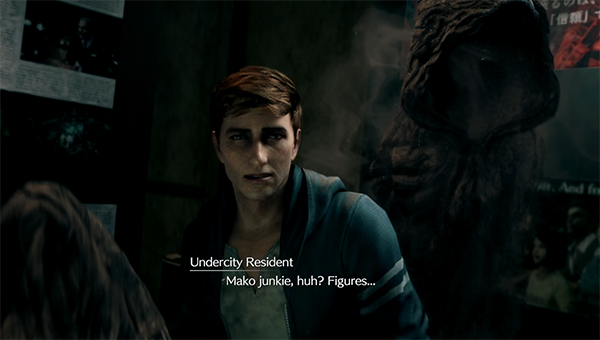 There's nothing currently to find at the train station, so follow Avalanche towards the Sector 7 Slums area. You'll come across a guy at a billboard who doesn't seem to think Avalanche are the good guys and Cloud has another premonition moment where those hooded figures show up again. 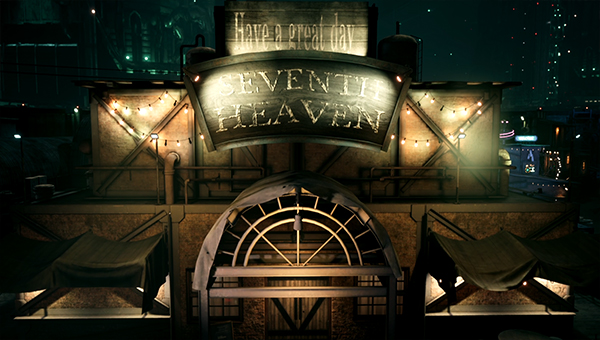 Follow Jessie, Biggs and Wedge to Seventh Heaven and you'll see Tifa on the steps. Head inside... 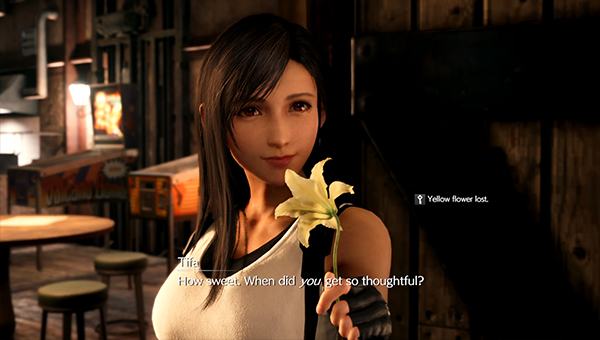 Cloud is still concerned with getting paid, so after scaring Marlene (Barret's daughter), Tifa talks to you outside.

She mentions she has a place for you to stay, so follow her as she leads you to Stargazer Heights.

Head inside your room where Tifa reveals that Avalanche don't exactly have enough money to pay you. However, she does say there is a small job you can help her with to get the rest of your money. 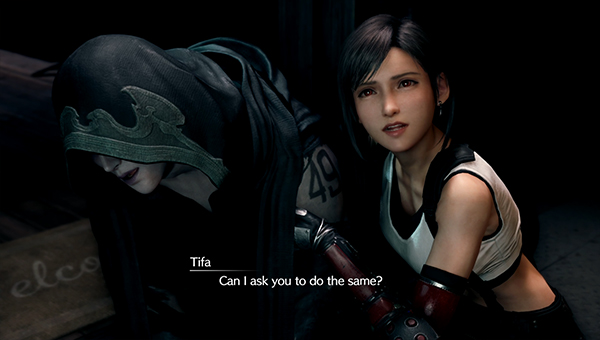 Once left alone, Cloud goes to sleep but is suddenly awoken by his next door neighbor. Cloud rather unceremoniously enters and has a vision of Sephiroth before coming back to reality.

Tifa explains this old dude is Marco...but something seems suspicious. 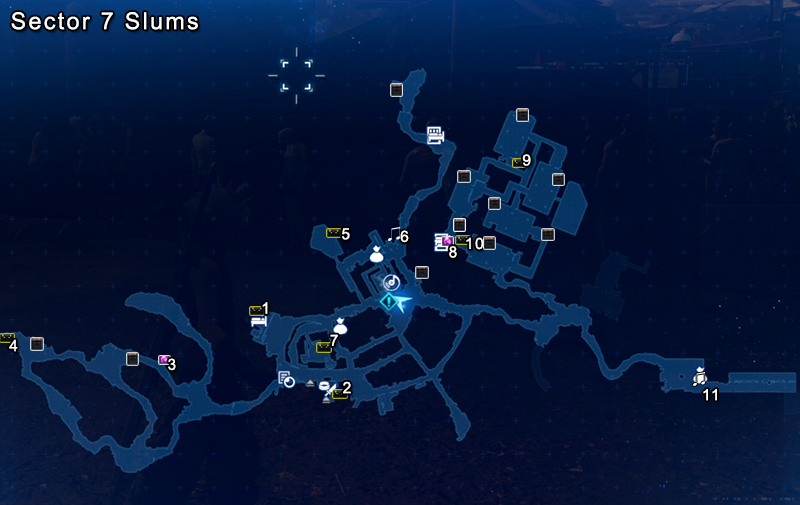 Before you get a chance to really explore Sector 7 Slums, it's best to finish this part of the storyline to start unlocking your freedom. Exit your room and head to the roof of your apartment to find a Treasure Chest (1) with a Phoenix Down inside it. 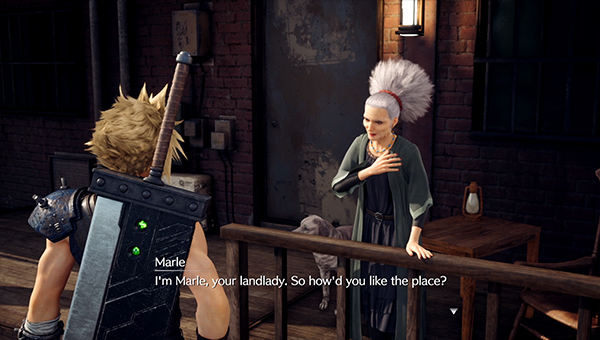 Head down to ground level and you'll be introduced to Marle- your landlady. After, head to Seventh Heaven to link up with Tifa. She wants you to help her change the Water Filters of people in Sector 7 Slums- a great way to take a look at all the different places to explore. 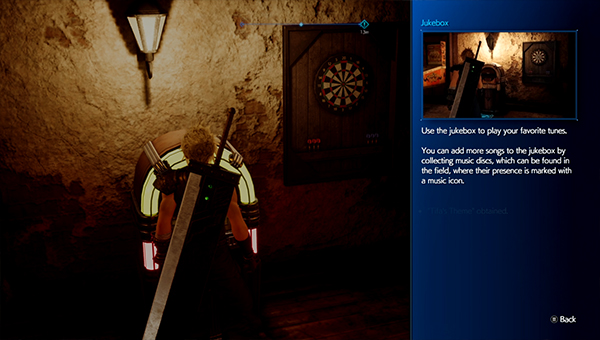 Before you head out, go to the Jukebox to pick up your first Final Fantast VII Remake Music Disc - Tifa's Theme.

These Music Discs can be found all over Midgar and you can play them at the Jukebox whenever you like. A lot of the themes will be familiar to those who played the original FF7. 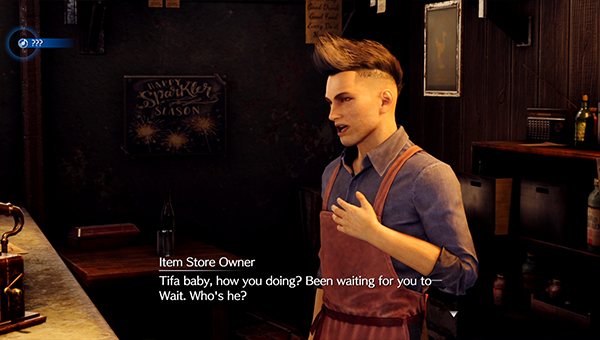 Follow Tifa as she leads you to the Item Store. Here you can buy general item goods, as well as another Music Disc - The Prelude for 50 Gil.

You can also buy Materia here; it's a good idea to buy some more Healing Materia and equip it to Tifa. Ice Materia is also good as some of the monsters in this area are weak to Ice, however, you'll be able to pick up some Ice Materia shortly for free on the floor.

Head back outside and talk to Tifa. Next stop is speaking to Marle again at Stargazer Heights. She gives you 200 Gil and mentions you can now use your Bedroom as a rest stop to restore your HP and MP. 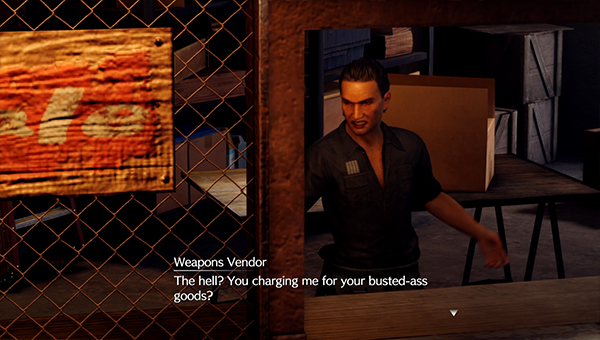 The final stop is the Weapons Store. The guy doesn't take too kindly to Cloud telling him to hand over 200 Gil and refuses to let you buy items from him. Oh well, his loss!

Follow Tifa up top of the Weapons Store, making sure to grab the bottle of Ether from the Treasure Chest (2).

Head inside to meet Biggs and Wedge who let you join the Neighborhood Watch to help improve your reputation. In return for helping them, Biggs teaches you about Weapon Upgrades.

You can upgrade your weapons with SP, earned from leveling up. You can set each weapon to be automatically upgraded from the main menu so you don't have to manually upgrade each time you level up. 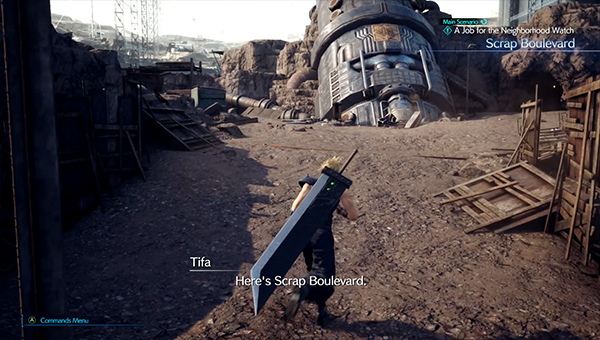 Your next stop is Scrap Boulevard for a little battle action.

Tifa joins your party - she is great at close-quarters combat and dealing combo attacks. If you have any Healing Materia, equip it to her now to help out in battles.

Scrap Boulevard is to the left of the Sector 7 Slums. You can pick up some Ice Materia (3) in the caves.

You're tasked with clearing up some Gorger monsters in this area; they can use their Feast ability which makes you unable to attack for a period of time. During this, you should switch to Tifa and start dealing damage with her instead.

Clear the entire area of Gorger and Wererats and it's mission accomplished. 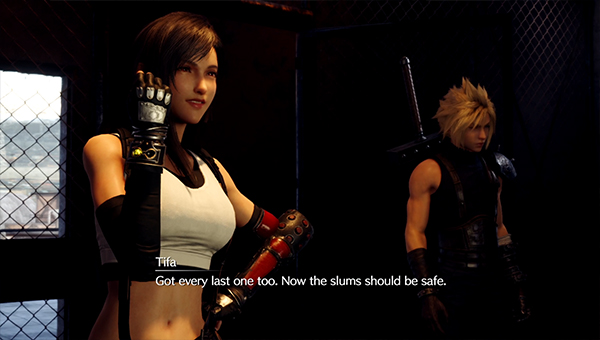 Pick up the Treasure Chest (4) before heading back to the Weapons Store and find Biggs and Wedge.

You can now get a new weapon for Cloud from the Weapons Dealer below after he heard about your latest success.

He also teaches you about learning new abilities by equipping new weapons.

By using new weapon abilities, you earn Proficiency Points towards learning the ability permanently. Once maxed, you can then switch to other weapons and keep that ability forever.

Equip the Iron Blade to Cloud to learn the Triple Slash ability. 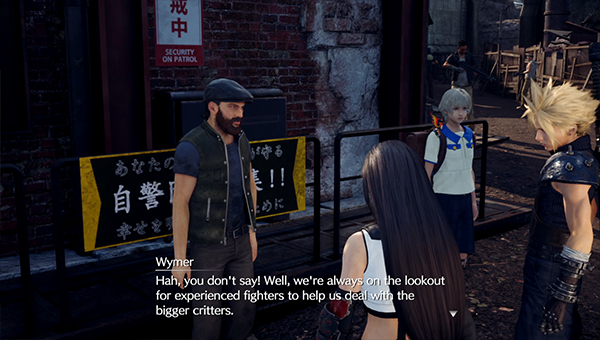 In Final Fantasy 7 Remake, you can also take on option side quests in various towns and locations. If you head to Wymer, Tifa will introduce you as a Merc looking for jobs. This will activate several optional side quests all around Sector 7 Slums.

You'll also get introduced to Chadley, who will give you various Battle Intel Tasks in return for Materia Rewards. You'll gain 2 Battle Intel tasks by default- you don't have to complete them, but the rewards are worth it.

In order to continue, you must complete at least one Final Fantasy 7 Remake Side Quest. We recommend going to speak to Betty and finding her lost cats for the quest Lost Friends. Use our Sidequest Guide for help solving Sidequests.

Once you complete one optional side quest, you can continue the story. Tifa recommends heading back to the bar. As you arrive in the area near Seventh Heaven, a commotion happens. 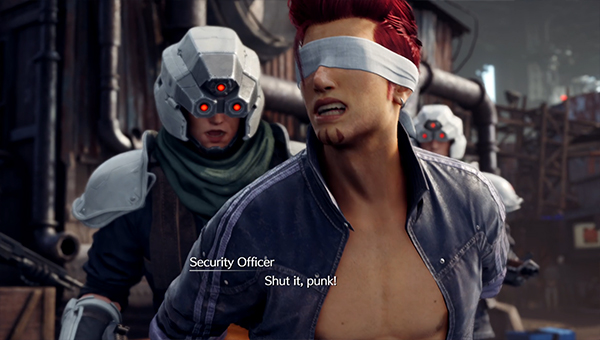 Johnny is apprehended by some Shinra Security Guards. Tifa is scared he'll talk and reveal the secrets about Avalanche being behind the bombing, so you agree to go and help rescue Johnny.

Follow Tifa and you'll end up having to take out the guards. You give Johnny a warning and he runs off, promising not to talk. On your way back to Seventh Heaven, pick up (6) Music Disc #27 - Hip Hop de Chocobo from a vendor just behind the Seventh Heaven building.

Once inside Seventh Heaven, you're not invited to a secret meeting below so Cloud is told to just hang out at the bar. You can now play the mini-game Darts, which is right next to the Jukebox. If you manage to come top of the leader board, you'll unlock an Achievement/Trophy.

Head back to the bar once done and Tifa will saunter back up, followed by the rest of Avalanche. Barret gives you the rest of your Gil, but tells you you're not needed anymore. Well that's nice. 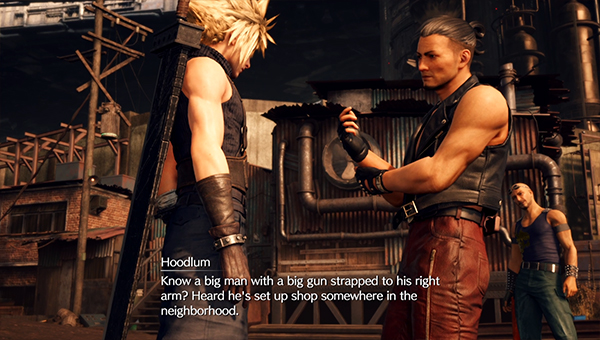 Head outside Seventh Heaven and you'll run into a squad of Hoodlums. They're interested in Barret; follow them and you'll end up having to take them out. They're easy enough. 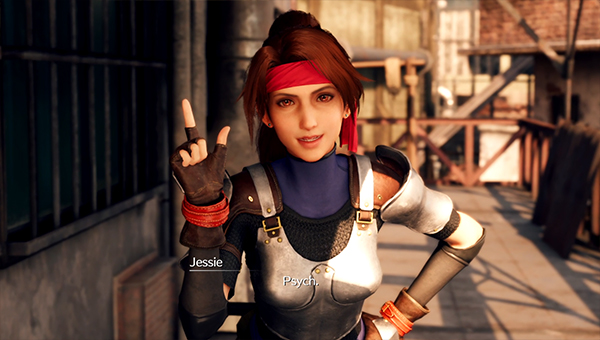 Once done, head back to your apartment where you'll find Jessie waiting for you.

She will give you some new Summon Materia so you can now use Ifrit in the toughest Boss Battles.

That wraps up Chapter Three of Final Fantasy VII Remake! This chapter opens up more of the game to you and gives you more freedom in terms of what you do. You can easily skip all the side quests and still finish the main story without much difficulty.