The Moogle Emporium is a special shop where you can spend your Moogle Medals for items, weapons and other rewards.

Moogle Medals can be found all over Midgar and the shop becomes available from Chapter Eight in the Sector 5 Slums - Central District.

The Moogle Emporium can be accessed from the hideout in Sector 5 Slums - Central District during Chapter Eight. You must first complete the simple side quest called The Mysterious Moogle Merchant.

To complete the quest The Mysterious Moogle Merchant, you just need to purchase a membership for 1 Moogle Medal from Moggie in the Hideout. If you don't have any Moogle Medals, there is one in a Treasure Chest right next to Moggie.

During Chapter Eight, you can purchase the following items:

During Chapter 14, you can purchase the following extra items

How To Get Moogle Medals 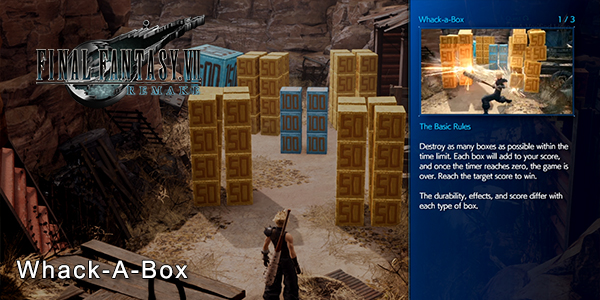 Moogle Medals can be obtained in a number of ways. They can be found throughout Midgar in Shinra Boxes and Treasure Chests.

However, you can get an unlimited amount by playing the mini-game Whack-A-Box.

This game can be accessed by talking to one of the kids in the hideout during Chapter 8. You can play this game repeatedly and get a Moogle Medal every time- even if you score 0! This is a great way to farm Moogle Medals.

The game is also upgraded during Chapter 14 to a new harder course.