In Chapter Four, Jessie has requested Cloud's services to help her with a secret mission in Midgar.

The chapter begins meeting her on the platform station in Sector 7 Slums, joined shortly later by Biggs and Wedge. They've brought along some motorbikes for you to use in order to get to topside of Midgar. 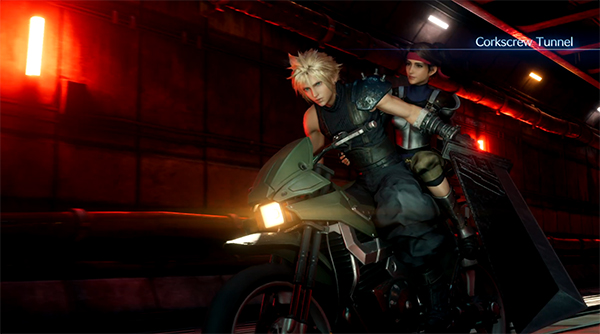 In the original Final Fantasy 7, there was a mini-game where you would ride your bike and knock down enemies. Well, it's been successfully recreated for this scenario as you and Jessie ride together.

During the journey, you'll be joined by several Shinra guards. You can use your sword to knock them down either side of you; don't forget to use your Boost and Break so that you get close enough to hit them.

You have a charged Spinning Slash ability that slowly charges over time. You can use this to take out multiple enemies at once. If your HP reaches 0, it's game over. 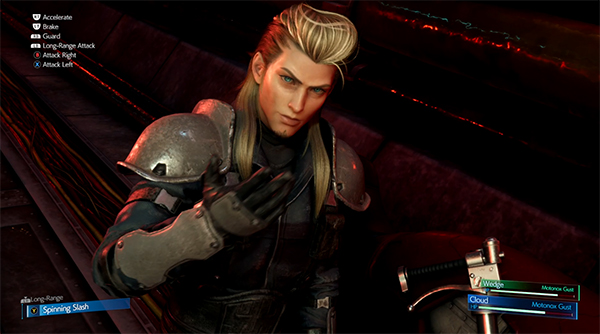 Once you reach the end of the tunnel, you'll be joined by a guy named Roch, who apparently is also a Soldier of Shinra. You won't remember him from the original game as he's a completely new character.

Roch is a lot more difficult compared to the enemies you've faced so far on your bike. He has two attacks that will slow you down; a straight beam attack and several inter-cutting slash attacks. If you get hit by them, you'll slow down and won't be able to catch up to Roch to deal damage. 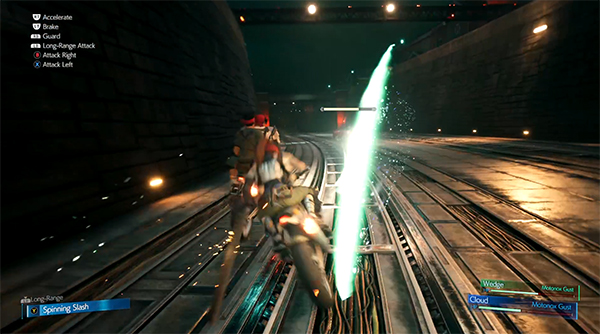 When you get close to Roch, use your Spinning Slash ability as often as possible. He'll do a new shock move after a while, so try to swerve out of the way.

Once Roch's HP becomes < 50%, he'll start summoning lightning in the middle of the road; just swerve out of the way to avoid. He will also jump on top of you and use a shockwave blast attack- keep an eye once he's in the air and swerve in the opposite direction to avoid the attack.

Overall, Roch isn't too difficult once you get his attack patterns down.

Once defeated, Cloud will see that Roch backs off and you arrive at Sector 7 Depot. 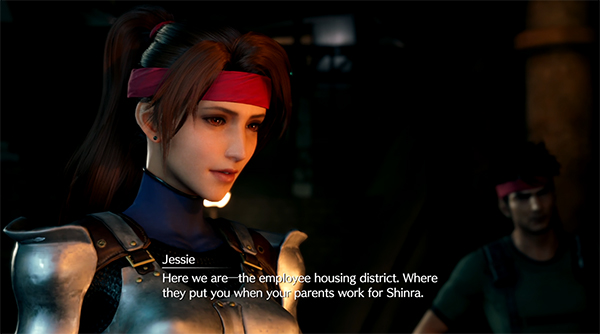 Follow Jessie, Biggs and Wedge out of the Depot and into the Sector 7 Residential Area. There isn't a lot to find in this area, so follow the guys to Jessie's house where the plot unravels.

Jessie tells you wait outside her house; a flashback occurs where Jessie explains it's your job to steal her father's Shinra ID badge. Once you're given the signal, enter in the back of the house and sneak into her father's room. 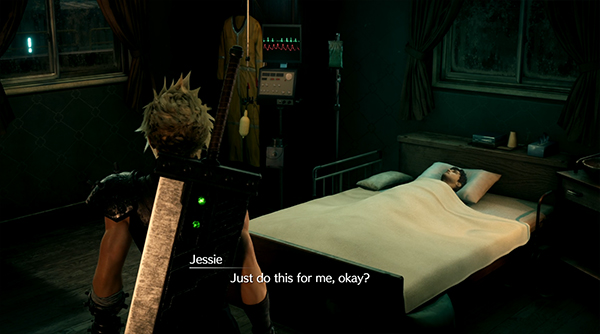 A grim sight greets you; Jessie's father is hooked up to some machine due to Mako poisoning whilst working for Shinra. You can find the Shinra ID badge in his work uniform hanging on the cupboard in the corner of the room.

Once you have it, leave the house and wait out front. A short cutscene will occur with Jessie, Biggs and Wedge inside the house and they'll shortly join you after. 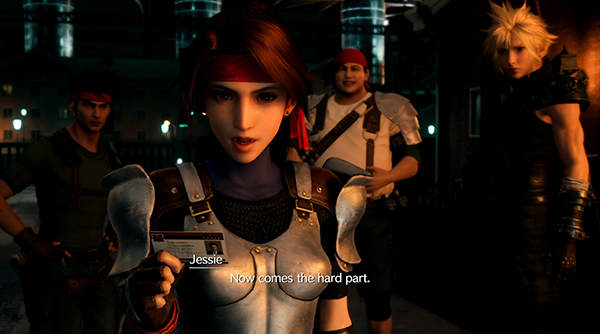 Jessie then reveals her plan to sneak into the Shinra Factory on her own, whilst you, Biggs and Wedge create a diversion.

Follow Biggs and Wedge up the street, where Biggs tells you a bit of back story about Jessie.

You'll eventually come to a security checkpoint- although the guards seem to have already been dealt with. 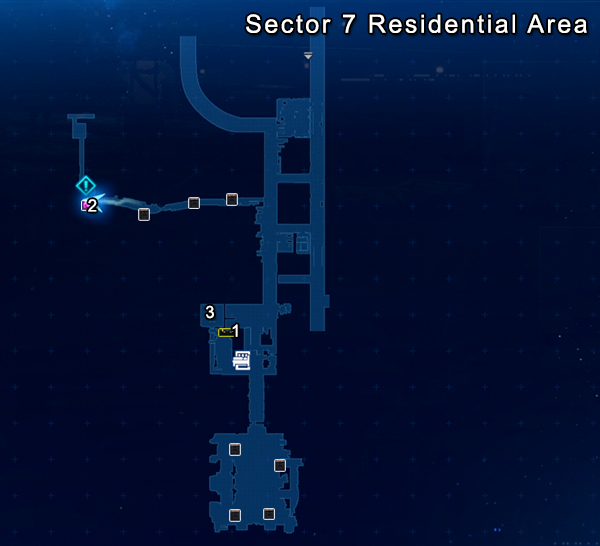 Before you go running off to create the diversion, there's a few little things in the immediate area you can deal with.

First, there is a vending machine and bench to rest up on. The Vending Machine will sell you some discounted items. You can also pick up 2x Hi-Potions from a Treasure Chest (1).

Finally, there is also the Training Center (3) you can use. This is a simple area where three Sentry Ray Gun monsters appear. Defeating all three will net you 100 Gil. You can repeat this as many times you like. You'll also get a bit of EXP too!

Speak to Biggs once you're ready to continue. 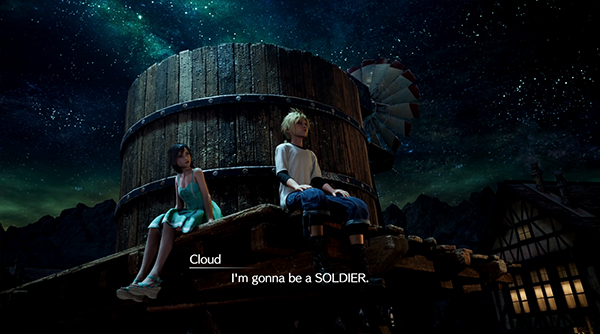 You'll have a short flashback cutscene where Cloud remembers telling Tifa about wanting to become a Soldier when they were younger.

You'll then be interuppted by Jessie's signal- now is the time to start the diversion.

Head into the Annex and you'll be greeted by several rounds of Shinra Soldiers, Guard Dogs and Mech Robots. If you find yourself running low on MP, there are plenty of Shinra Boxes in this area you can smash up for MP Recovery.

After you wipe out the round of Guard Dogs, you'll then have to take on two Sweeper monsters. They're weak to Lightning Materia, so blast them away once you charge your ATB.

If you equipped your Summon Materia, Ifrit should also become available for you to summon him. 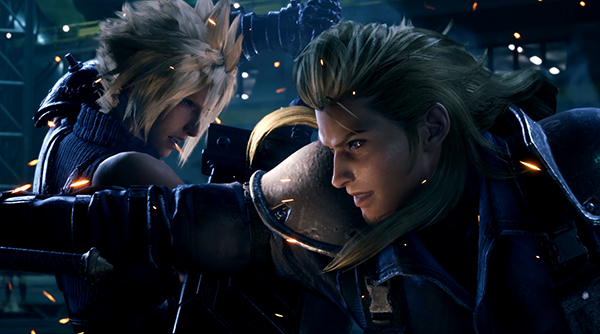 You will end up surrounded by Shinra guards, who then get interrupted by Roch on his obnoxious bike.

This fight is pretty easy all things considered. The first phase of this fight, you should try attacking Roch from behind as much as possible. When your ATB is charged, use your Braver attack to deal some hefty damage.

Once Roch reaches around 60% HP, the second phase begins. This time he has a few more moves; his Ignition Flame sends a firey line at you that will stun you if you get hit. He can also rush you that can be incredibly hard to dodge.

Either way, the same tactics work as before; hit him until you charge your ATB and then time your Braver attacks. 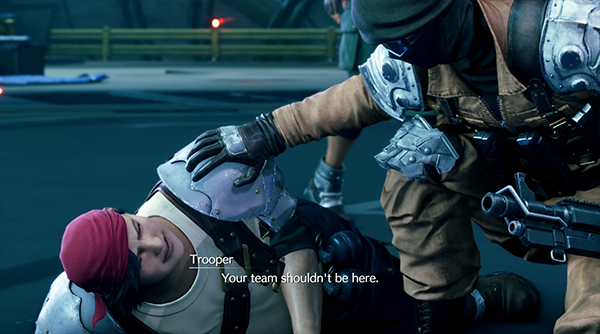 After the fight, Roch takes off and you soon get surrounded again. This time you're saved by another branch of Avalanche who take over the scene. You and Biggs flee.

You meet up with Jessie just outside the Security Checkpoint and Wedge just randomly appears too, albeit, he is injured.

Jessie will lead you out of the Residential Area and towards the Sector 7 Plate Edge. Here you can pick up some Revive Materia (2) on the floor. 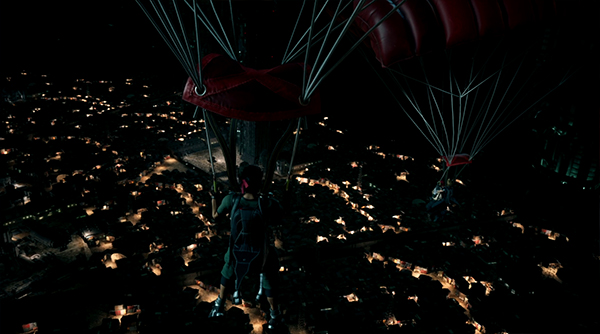 Jessie then proceeds to find some parachutes and you jump off the plate and head back to Sector 7 Slums. 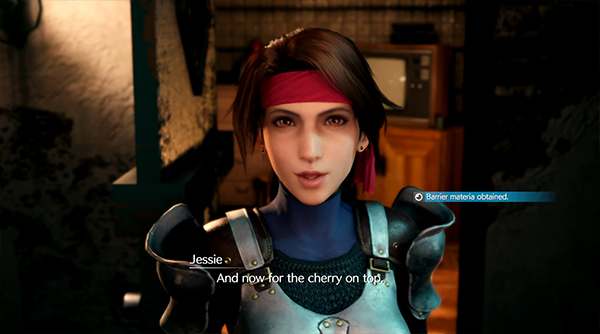 You and Wedge drop in at Scrap Boulevard. Follow Wedge as he shows you where everyone lives in the Slums. Eventually, you'll want to go see Jessie for your remaining payment.

She gives you Barrier Materia. After a brief exchange, head back to your apartment at Stargazer Heights. Head to sleep to start the next part of this chapter. 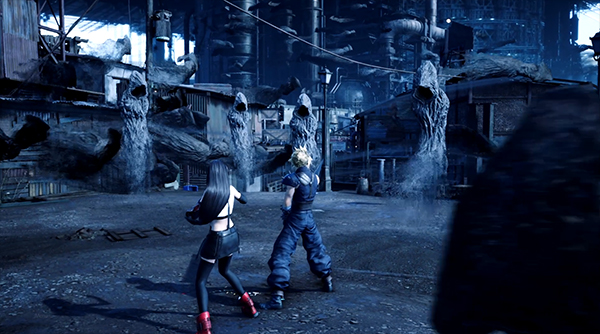 After a quick cutscene with Tifa, you're awakened by those hooded figures. You and Tifa will need to fight your way to Seventh Heaven to help the others.

Mysterious Spectre's are pretty easy to take out; have Cloud chop them down and you'll make short-work of them. 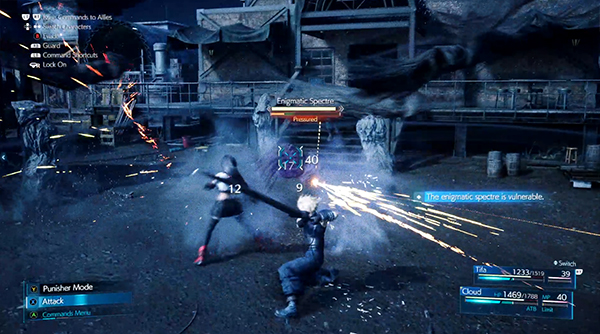 This boss fight is quite short and simple.

You need to attack the Mysterious Spectre's around you, which will then make the Enigmatic Spectre vulnerable for a few short seconds. During this time, you should use Cloud's Focus Thrust to get the stagger bar going.

Once the Enigmatic Spectre is staggered, the fight is over. Use Cloud's Braver attack to wipe it out. 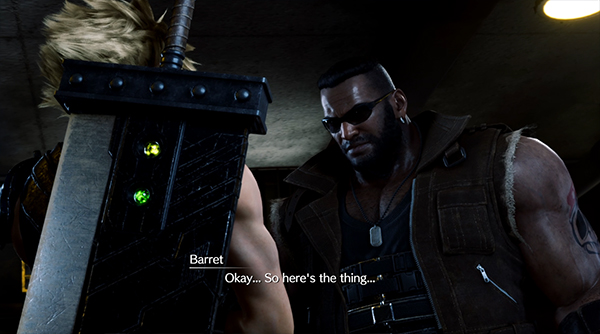 Jessie gets injured in the aftermath and as a result, Barret requests for you to help them with the next mission in Midgar. You'll also gain 500 Gil.

If you managed to come top of the leader board in the darts mini-game in the previous chapter, talk to Wedge and he will give you Luck Up Materia. 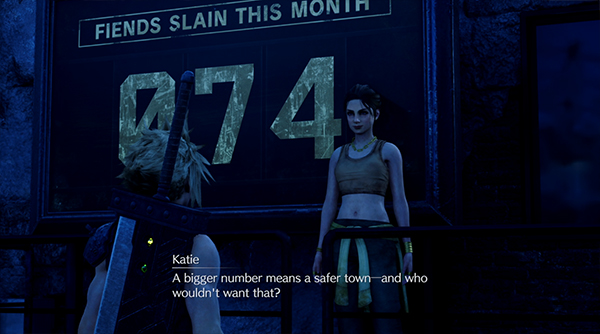 Before you leave this chapter, now is a good time to go speak to the Kill Count lady called Katie. She will give you some rewards based on the amount of monsters you have cleared up in the area.

That wraps up this chapter of the Final Fantasy VII Remake Walkthrough! Let us know in the comments if we missed anything!