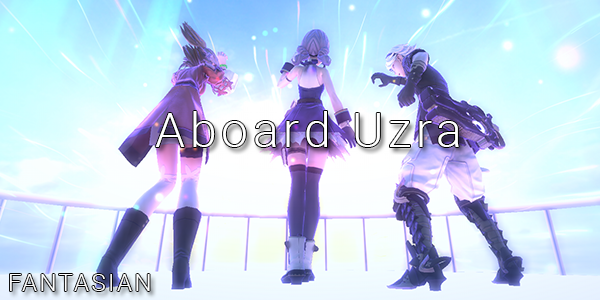 In part 5 of the Fantasian Walkthrough, you leave Frontier Town of En to go aboard the Uzra flying airship!

Once you've boarded the Uzra and watched the cutscene, you'll be able to take a look round the ship!

At the top of the pool on one of the deckchairs is a Amethyst S. Once you've collected it, head inside to Uzra - Hall. Kina wants to look around so it's a good idea for us to take stock of our new location. 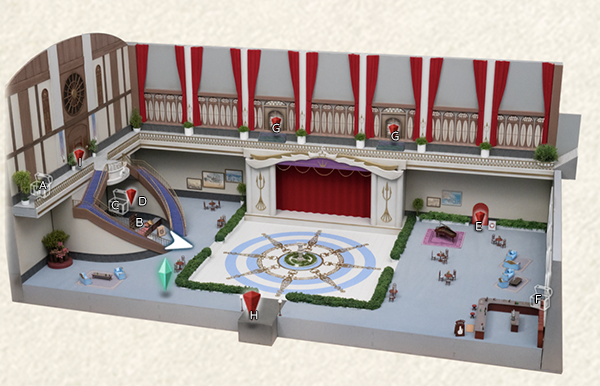 Move along the balcony in the direction Kina ran off and you'll find a Treasure Chest (A) at the far left with a Protein Drink x3. Speak to Kina (I) and head down the staircase.

Speak to the Luxury Arms [Weapon Shop] (B) guy and buy yourself a Mage Staff for Kina. If you've missed out on any of the gems, you can also buy them here too.

On the left side of the hall there is some giant flowers where you can collect 500 G. On the other side is a Treasure Chest (C) containing a Heal Stone.

Speak to Kina and follow her across the dance floor. On the table is 300 G and another Treasure Chest (F) near the bar. Now speak to Kina by the Piano. Once the cutscene is over, follow Kina back to Penthouse Suit (I) at the top of the staircase. 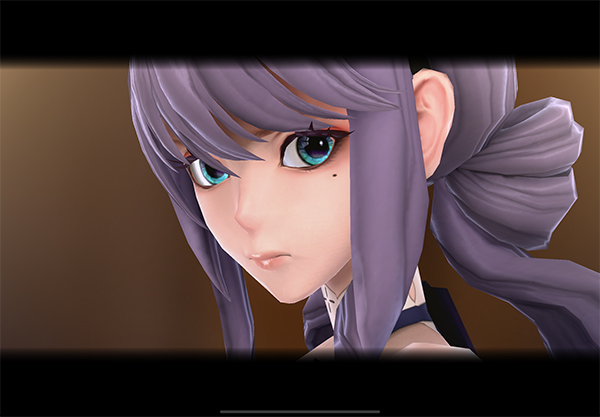 Looks like you know who is now staying in the Penthouse Suit! Talk to the guard outside the room to get access. Once inside, you're treated to a new memory: The Jilted Princess. Looks like Leo has got a lot of explaining to do and Sebastian seems to think so too! 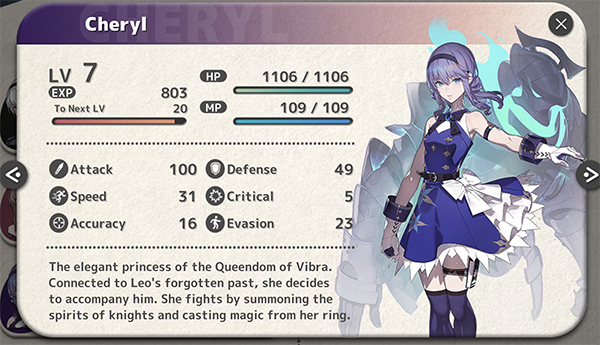 A quick battle ends in Princess Cheryl joining your party as a new disturbance on board the Uzra causes you all to investigate.

Head to Uzra - Deck (starboard) (G) to find out what's going on. 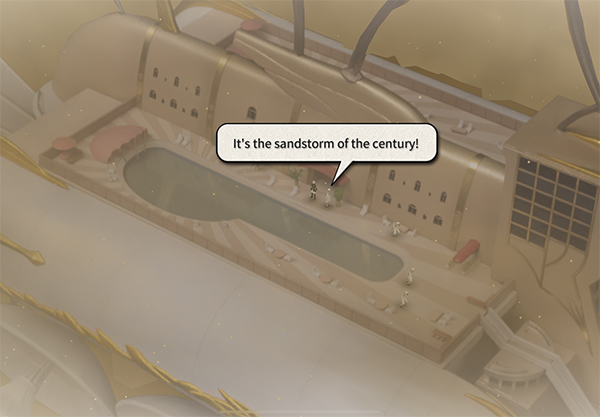 A giant sandstorm has been unleashed and with it comes some new mobs for you to fight: Mecha Sandphin, Mecha Piranhara

Head down the stairs, past the Save Point to find the Uzra - Bow Walkway. There is a Treasure Chest (A*) behind the stairs in front of you containing 3x Protein Drinks. Head straight up the stairs to find Uzra - Bridge (B*). Collect the Treasure Chest (Phoenix feather) on your right before talking to the captain.

Before the fight begins, equip your characters with any Amethyst S gems as this will allow you to resist lightning damage. 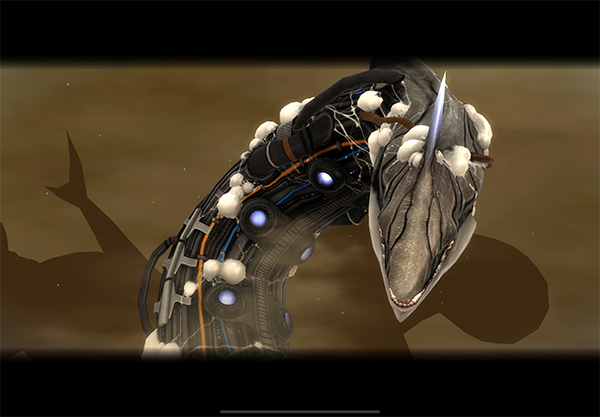 The boss has an Energy Charge move that takes 3 moves to charge. He can also attack whilst it's charging, so you need to make sure Kina is healing the party. Use Leo's First Aid if you have to also.

The boss is weak to Holy damage, as are the mobs it spawns with, so use Kina's Holy skill to take them out quickly. The boss will use Bite and Thunder Ball attacks whilst waiting for his charge move to build up.

It's 3/3 move is called Thunder Breath, which hits everyone in the party for around 400-600 damage each. As soon as it's over, heal up. Hopefully you've been taking out the mobs also to make quick work of getting back up to full health.

When Sandsea Serpent's health is low, he can also use Hyper Bite, which bites all 3 party members for high damage. When this happens, focus fully on healing, especially as the boss will be preparing another Thunder Breath for you.

Head back to Uzra - Bridge (B) and speak to the Captain Zinikr. A small mini-game requires you to help the captain steady the ship.

After a short cutscene where you dodge almost certain death, you make it out of the storm. You're then taken to the Uzra's Captain's Room where Cheryl decides to stay with you and puts Sebastian in his place. Head forwards and you're made aware of a Special Concert being put on for you.

Head back to Uzra - Hall. Before you arrive, Cheryl has an amazing idea and runs off. You can find her just outside the Uzra - Infirmary (E). Cheryl tries to get the doctor to jog your memory but it's no use. Inside the Infirmary is a Treasure Chest containing a Remedy and by the bed is an Ether S. You can use the Infirmary to rest up and heal.

Head outside and you now need to go back to Uzra - Captain's room (C*). When you arrive, the Captain Zinikr is apparently in the engine room. A cutscene occurs in which you get to see your next destination: Vence - City Of Water!

Looks like more chaos is unfolding- head to the Uzra - Engine Room (D). You can get there from Uzra - Hall. Before going in, equip any Garnet S gems to get Fire Resist ability- you're going to need it!

As soon as you enter you'll have a quick battle. Head to your right and open the Treasure Chest (A) for 3 Ltng Fragments. Then cross the main bridge and open the Treasure Chest (B) containing Mettle Belt (this belt gives you the Survival Instinct ability, which auto-revives you when you die). Now head to your left where you'll have to fight some new mobs: Mecha Kackle, Zoragon. 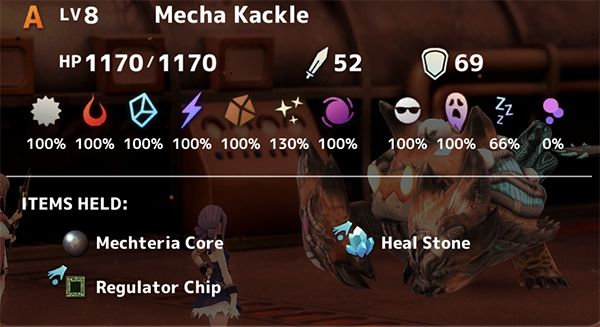 Take the Treasure Chest (D) on your immediate left for 1000 G. The three white Treasure Chests cannot be opened without a Mechteria Key, which you do not have. They contain: Staff Of Life, Ruby M, Bloody Sword.

Head to your right and you'll find the Captain Zinikr trying to drop the ship's Anchor. For some reason it's not working and surprise, you're tasked with finding out what's going wrong.

Head up the ladder to your left and follow the platform straight on until you get to the ladder directly ahead of you. Drop down and open the Treasure Chest (E) to get a Silver Ice Ring, which can be immediately equipped to Cheryl. Head back up the ladder and this time take the middle platform until you come to some more ladders. Go down and then to Uzra - Core.

Heal up and prepare for a massive mob battle. Follow the platform until you get to a Save Point. Choose the right path and open the Two Treasure Chests to get Potion S x5 and Energy Drink x5.

Now take the right path and you'll notice a lone mob. But it's actually not alone...

You've got to wipe out a 100 x mobs. They keep regenerating, so use all your mobbing skills that you have available. Try and take out as many as possible in one hit as when they chain their attacks together they can easily wipe you.

They use the Acid attack, which gets you Defense Down debuff for 5 attacks (almost doubling damage to you). You can use Kina's Resist to block it but really you're better off using the Holy skill to wipe out the mobs as fast as possible.

At a certain point, the mobs change their mode to a frenzy attack mode. The mobs will hit you faster and harder now.

A new cutscene happens as the Captain drops the anchors. Unfortunately it's not good enough, so you take a boat to warn everyone of the Uzra about to crash into the Vence harbor!

Once you arrive at Vence, follow the harbor round until you bump into the Mayor. A new cutscene happens and Kena summons the mysterious queen god to stop the Uzra from crushing everyone. That was close!

Unfortunately, the drama isn't over yet as Kina collapses. Vam arrives and brings with him some strong mobs: Chaos Wolzas, Chaos Avaris, Chaos Bomb. 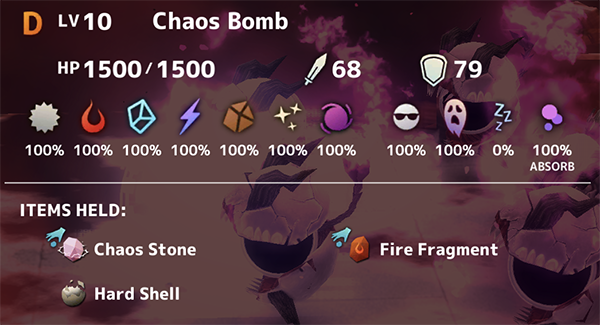 Be careful! These mobs pack a punch and you only have two party members to help you. The Chaos Bombs will self-destruct if not taken down swiftly (use Leo's Samidare move if you have it). The self-destruct leaves behind a Poison debuff too. Those Chaos Wolzas will also spawn more Chaos Bomb if you don't take those out either! 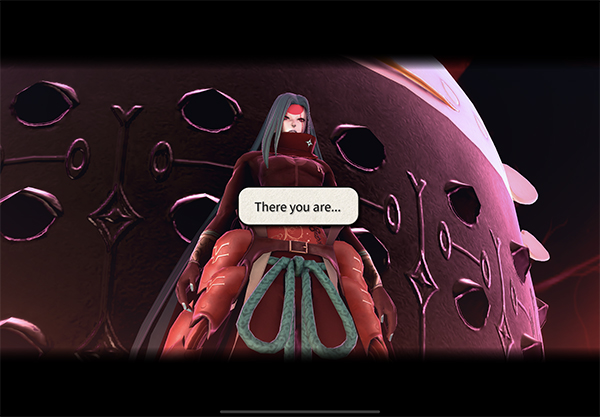 Watch the next cutscene in which Vam appears again.

That wraps up the latest part of our Fantasian Walkthrough!

After You enter the balcony You can grab Garnet S. It's at the end of balcony, opposite to the way Kina ran off.

After You go down the ladder to Uzra - Core, there's a chest with Ether x 3, just move a little bit to the ladder side, it's on the left.

Don’t forget to go back to the Urza anchor compartment before disembarking to grab the chest where you fought the x100 mob. Elixir x2