This part of the Fantasian Walkthrough will see us upgrade our final party member's Divine Artifact, Ez and the head over to the lost city of Shangri-La.

In order to upgrade get access to Ez's Story Quest Ez and The Guild, you need to complete the side-quests Treasure Mountain and The Golem's Revival. Both of these quests can be gotten from Outskirts - Hideout and speaking to Pops.

Ez and The Guild

Now that you've completed the both those quests, you can finish Ez's Story Quest "Ez and The Guild".

Go back to Outskirts and speak to Pops. A cutscene will happen and you'll have to face a new boss... 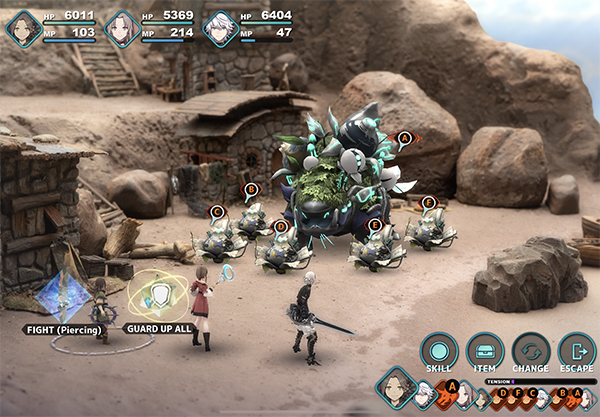 The key to this boss fight is to use Ez's Vacuum V2 skill. This will suck all the mobs into a safe spot, allowing you to easily hit the Mecha Garlamash. If you can, equip any Citrine Quartz gems you have to prevent Sleep.

Have Concentrate and attack up buffs given to Leo, keep Ez casting Vacuum and Quick All. You can switch to Tan as he has a decent single target hit too. Make sure to keep Attack Down on the Mecha Garlamash as he does have some hefty attacks than can wipe out the party.

Check out the video guide below for more help:

After defeating the boss, Ez's Divine Artifact is upgraded!

This will also allow you to take on the Extreme Dimengeon quest which will upgrade your Dimengeon Device to hold 50 monsters and give you more powerful buffs when using it, so it's well worth upgrading.

The Lost Ancients is a Story Quest given to you automatically as you enter Shangri-La. Shangri-la can be accessed at the top of the World Map. It has a recommended level of 52.

Cheryl talks about how Shangri-La used to be an advanced civilization that knew how to control the weather. 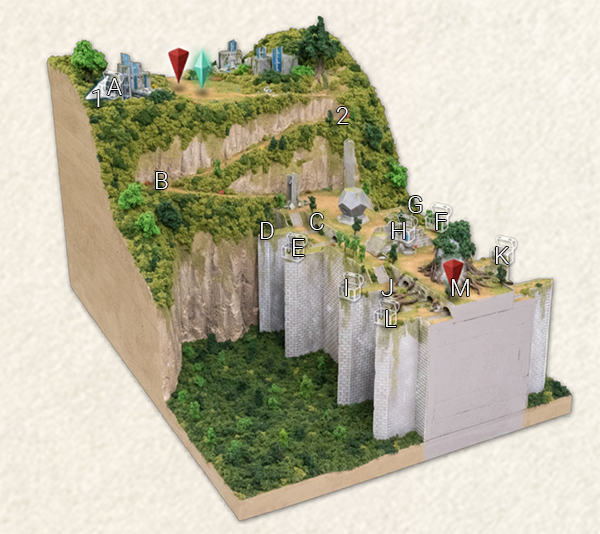 Location: Shangri-La - Bridge to the City

In order to get around these maps, you need to pick up Durable Ivy floor loot. We've labeled this with numbers to show their location on the mini maps.

There are also God Chests here that can be unlocked with God Keys (dropped from mobs in this area). You can find the following from Floor Loot, Treasure Chests and God Chests:

You'll come across a group of Earth elemental monsters. Assuming you've kept the weather to lightning, all your lightning attacks will deal more damage now. Earth is weak to lightning too, so even more damage is done.

You will be coming across more of these elemental clusters. You should prepare in advance of each one and switch out your Elemental Gems for Resistance. 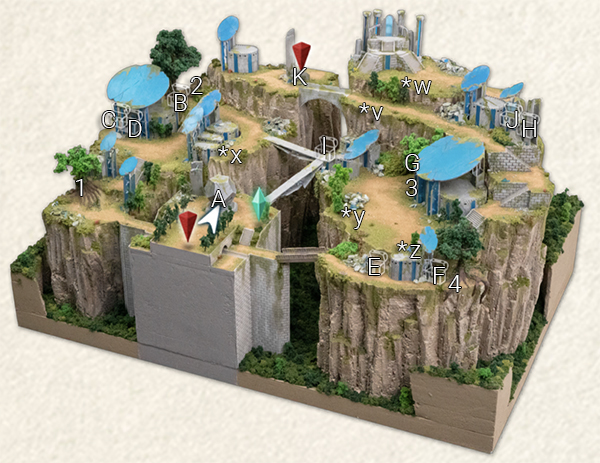 At the center of the map is a weather changing device (A) that you can use to boost certain elemental damage. When you change the weather, it also removes the force field of that element allowing you to progress.

This place is a puzzle. Essentially, you need to change the Weather various times to get to the end marked at. Along the way, you're going to have to fight clusters of Elemental Mobs that have a lot of health. They are easy enough, but they're even easier if you have Resistant Gems equipped.

Pick up the next Durable Ivy at 2.

Go back to the Ice mobs (D) and defeat them. Now change the weather to Blizzard.

Now change the weather to Lightning and head to G. Head up the stairs and go to *W to add the next rope. Defeat the Earth Mobs.

Add the rope to v* and change the weather to Earth. Return to the rope, climb down to defeat the Lightning Mobs.

You can find these items in Treasure Chests:

You can skip some of these elemental mobs if you want, but it means not getting the items in the chests. Once you get to *w, you can turn the weather back to neutral by going up to the altar.

You'll notice there are some Flying Eyes blocking your way at (K); this will be 200 mobs to fight at once. 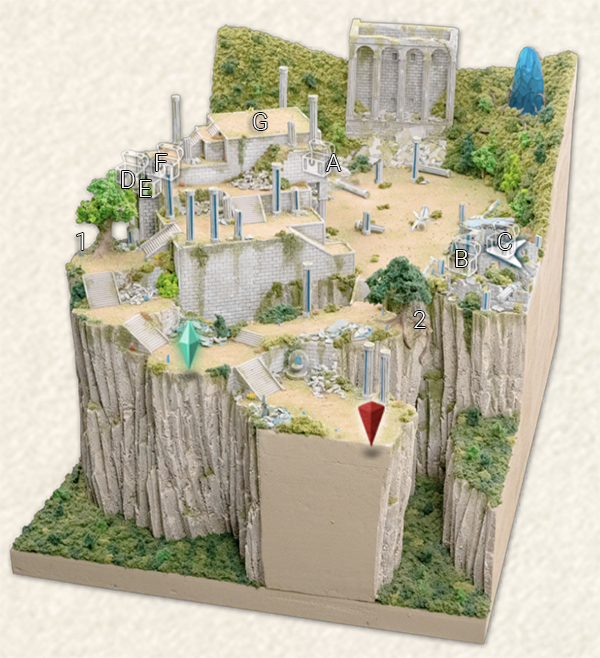 Here you can pick up the following items:

Head towards (G) for the boss fight! 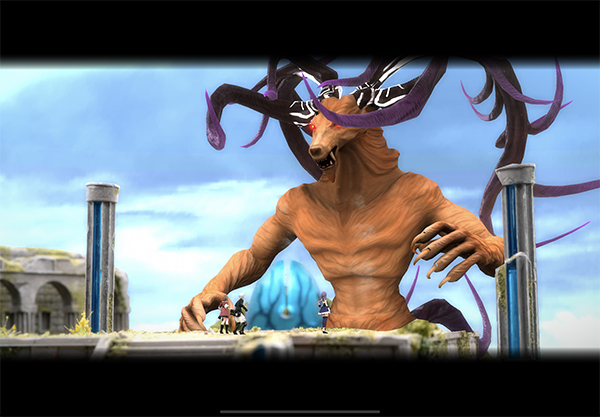 This boss is actually really easy once you know the mechanics. This boss changes weather types using Heavenly Piercing Howl and so you'll need to be switching between all your characters in order to deal the most damage.

In Fantasian, each Element Pairing is their weakness and strength. So Ice is weak to Fire and Fire is weak to Ice. These are the types:

You won't need to use Holy or Dark in this fight.

At the beginning of the fight, you're just going to have to tank some damage and die a few times.

But as soon as the Guardian moves away from you, he will reveal a Weather Changing device that if you hit, allows you to change the weather to your advantage.

So when Guardian turns the weather to Earth (sandstorm), you'll need to hit the Weather Device with a Lightning Fragment or a Lightning Grenade from Ez. This changes the weather to a Storm, making all Lightning attacks deal lots of damage and negates the damage of earth attacks.

Ez's grenade attacks are better to attack the Weather Changing Device since you can throw them over the boss. You can also use the party members elemental attacks to also change the weather by hitting the device.

And that is pretty much the fight. You just have to keep changing the Weather device to the element for your advantage and the Guardian's disadvantage. When there is no weather, you can use debuffs on Guardian to make his attack lower and guard down.

His Elemental Crush attack can hit hard- so make sure he has attack down at this point.

Afterwards, you unlock the Void Realm, which is coming in a further update to Fantasian later on.

That wraps up this part of the Fantasian Walkthrough. Let us know in the comments how you found Shangri-La and this weather-changing boss.

i find this boss a lot more easier compared to the likes of Omega and Yim. You can survve his Elemental crush as long as you have the barrier/guard up Cheryl's double charge + attack up + concentrate deals 99999 damage which is huge help. i got lucky as he keeps changing it to fire so I can ise cheryl.

there's a hidden chest in Shangri-La - Sanctum that's north to B and C, under the trees. It contains Chaos Clay X3

Needed to release all counters on the growth map so my characters didn’t kill themselves over and over…. esp with Leo’s piercing sword and all the bombs in one spot.. T_T

"Go back to the Ice mobs (D) and defeat them. Now change the weather to Blizzard." Can you elaborate please, what does changing blizzard do aside from opening up useless path (since rope was placed already). Enabling Blizzard, as far as I can tell does not allow you access to Y* .

I figured out what was confusing me, altitude and depth at point I (lightning ahriman mob) was very wonky, I did not want to encounter said mob, so I did not even approach. When I did, the camera shifted and I felt like an idiot LOL

How go I get to the chest at L in Shangri-La - Bridge to the City? I see no avenue to reach it.

It may vary.. I got a blue quartz