When you arrive at Vibra - Outskirts, this is Ez’s hometown. It's just outside the Royal Capital and this part of the walkthrough will see you head towards finding Leo's home!

First, collect the 10 G from a basket next to a man crouching down. Then head down into the centre, a cutscene will happen which shows the way to Leo’s house is blocked off by guards. Lucky for you, Ez knows another way. Before going to Ez’s house, first open the Treasure Chest containing x10 Fire Fragments.

Head down to the beach and a new cutscene will happen. Looks like Tan is back and needs your help. 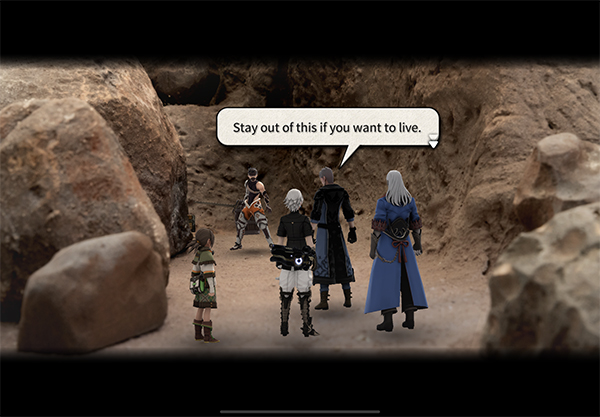 This isn’t really a main boss fight, but it can still be a tricky fight. With Tam joining your party, make sure you get Poison Needle to Garlamash early on.

Garlamesh is weak to Fire, so use Leo’s Fire Slash to hit 1.5x damage and also damage some of the bandits. Tam’s Galf Slash is really good here and can hit multiple enemies in one go.

Garlamesh can use Delay Smash to hit all three and also delay your next turn action. Just watch out for your party’s HP as the three bandits can stack up some hefty damage.

After the fight, head forwards to collect the Diamond S from the Treasure Chest.

On the beach is a new quest you can do called Picking Up Shells. You can also pick up x2 Hard Shell from a bowl. Head to Ez’s Workshop on the beach for a new cutscene.

You can talk to one of the kids to get a new quest: True Dimengeon. It’s worth completing this quest to upgrade your Dimengeon to hold more monsters (40). 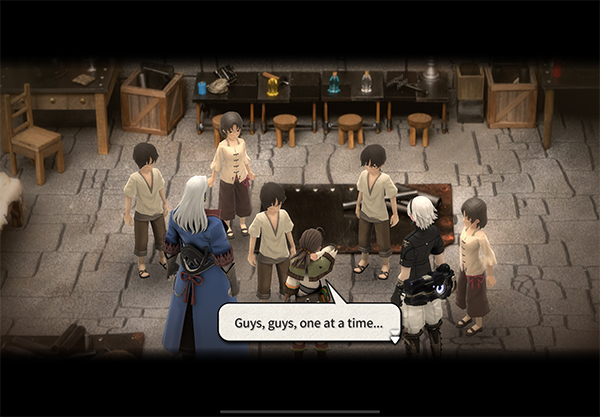 Head to the back room to speak to Ez’s father Dagaroon. You’ll get to watch a new memory: The Light Ez Saw. Ez decides he wants to help you guys save Princess Cheryl and has a secret tunnel leading into the city you can follow.

Before you go, you might want to stock up on some Hard Shell and Earth Fragments for Ez’s Terra Grenade skill.

Head left and you’ll find a Treasure Chest with a Potion L. Go to the ladder heading down. After a brief cutscene, go left to pick up a Treasure Chest containing Metal Knuckles. Equip them to Zinikr. Now head right and claim the Potion L from the Treasure Chest.

Keep heading right and claim a Treasure Chest with 3x Phoenix Feather. You’ll eventually come to a ladder leading you upwards. Before going up to the surface, head left and move the platform so you have access to the Treasure Chest containing 15,000 G. Now climb the stairs to Royal Capital - Main Street. 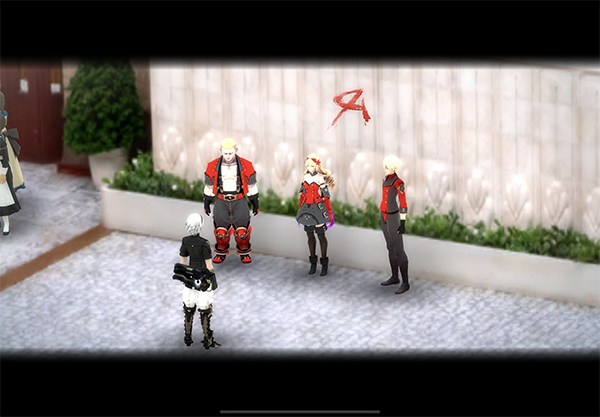 There’s nothing to do in the Main Street apart from battle the Cinderella Tri-Stars. You’ll see their mark on the wall- interact with it to start the battle.

This fight is a bit more tougher than your previous encounters. They now come with 4 Hades mobs to fight. Luckily, the drones don’t obey the Tri-Stars and will attack anyone at random.

Folt can also use Seal, which will prevent you from using any Skills for 4 rounds.

If low on health, have Ez using his Potion S All skill.

After the fight, head to Vibra Royal Capital. The place is quite big! You can head down towards the docks and pick up an Ether L. If you go right to the coliseum you can pick up a Remedy.

You can’t go to any other location other than the Royal Capital - Town Center. So head there! 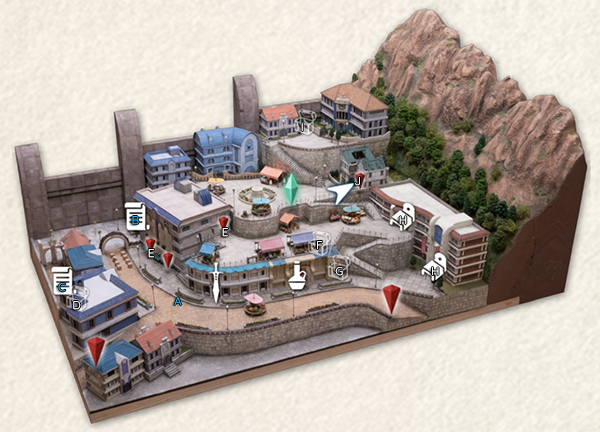 We are looking for Leo’s house (J) but before that there’s plenty of items to pick up:

Claim the new quest New Product Flyers (A). Once you’ve done that, head left and you’ll come to man doing push-ups. Claim the Sapphire M just in front of him.

After that, the old man in the corner will give you a new quest called Letter To A Friend (B). If you go down towards the alleyway you can open a Treasure Chest (D) with 6000 G inside and also a Potion L on the floor.

Afterwards head to Housing Complex 1F (E). Inside you’ll find a Treasure Chest with a Heal Stone. Next go in Room 103 and pick up the Potion S from the table. The other rooms are locked so go up the stairs to Complex 2F.

First enter Room 201; inside is a Treasure Chest containing 12x Potion S. By the basket of fruit is an Ether S. The other rooms are locked so go up to Complex 3F.

Enter Room 301. Inside is a Mechteria Treasure Chest that contains a General Sword for Leo. There is also an Onyx S on the floor by the open jewel case, a Potion L by the bedside table and an Elixir by the boots. The other room is locked.

Exit the Housing Complex from the corridor and you’ll come to an area with several market stalls. There is a Treasure Chest (F) near by that contains a Sapphire S and another Treasure Chest (G) at the bottom of the stairs containing a Potion L.

If you carry on going right there is 500 G on the ground beside a tall white building called the Town Center - Inn - 1F (H). Enter the Inn and talk to the man next to the plants. He is the guy you released from the Coliseum Prison and gives you 2x Elixir. Pick up the 300 G from the plant next to him.

Head up to 2F and pick up the Potion S on the table.

Go back outside and head towards the Save Point. Pick up the Potion S by the wheelbarrow, then head to the top of the town centre to open a Treasure Chest (I) containing 10,000 G.

Now that all the looting has been done, you can go to Leo’s House (J). This to the right of the Save Point.

There is a treasure chest on the 4th floor of Housing Complex in Room 403 with 10g, and a ether s in the drawer

and something on the floor at the top of the building, you can access it from 4th floor ladder to climb to the top