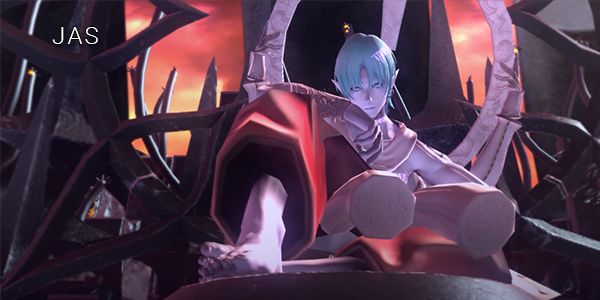 This is it! The final boss battle awaits you and its time to stop Jas once and for all. This part of the Walkthrough see's us head through the last stages of Sanctum in the God Realm, where we reach the summit to face Jas.

In the last section we successfully navigated our way through the God Realm and defeated the three Realm Simulation Bosses. Before we take on Jas, we have one more task to complete...

This place is great for grinding a few extra levels before facing Jas. You can also farm some of the rare crafting materials from the mobs in this area, so it's a good place to take a break from the boss grind. 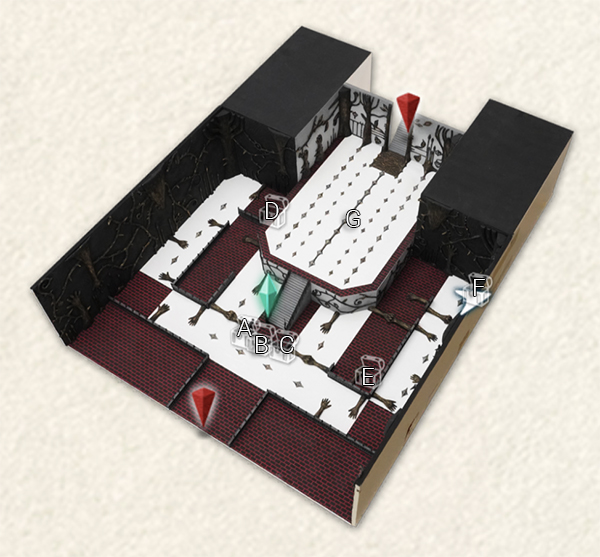 In this map, you can find the following from Treasure Chests:

Head towards (G) to face the next boss... 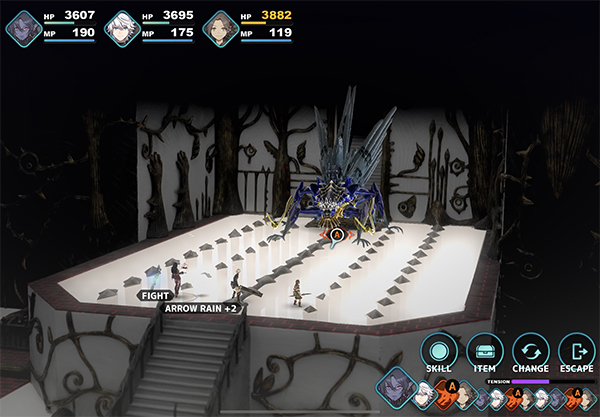 This fight is a lot easier if you equip Snow Quartz to prevent Petrifiction. You should also equip any Diamond gems to prevent Holy damage.

This boss is weak to Darkness attacks, so it's a good time to have Valrika in your party. Ez is essential for buffs and Leo is good for extra damage.

God's Predator will use Consume early on in the fight, which won't ever kill you, but will drain all your HP to within 1-5% and he'll heal for the amount he consumes. Curse does not work on this boss so you're going to need to heal up quickly.

God's Predator will then cycle through several moves: summon's two mobs, a swipe attack, Elemental Resist Down and Radiance (high holy damage to everyone in the party). He will also use Insert, which removes one of your party members from battle and casts Petrification on them when they return. If you have Snow Quartz equipped this should be easy to dodge.

Make sure you're casting Attack Down on the boss with either Leo or Valrika.

That's pretty much the fight; you just need to manage the mobs he summons and really this fight is quite easy. Valrika's Darkness attack can hit the boss and a mob at the same time; Leo can use Samidare Fire on some of the mobs which are weak to Fire.

After defeating the boss, it's now time to face Jas. Head through the door in Mirror Of Order and you'll come to Sanctum - Balcony again. You can pick up a Deus Augite from a Treasure Chest nearby. 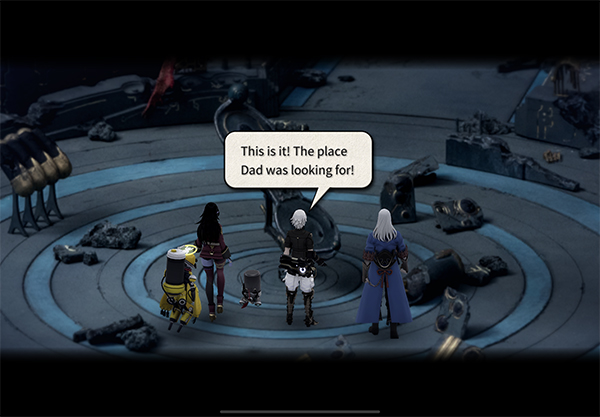 Head inside the tower and you'll come across the Resurrection Device that Leo saw in his memories. You'll also be able to pick up Broken Stealth Device, but so far this has no use and is probably for an update in Part Three.

You'll come to a spiral staircase and at the top Jas awaits you.

Jas has three separate battles; the first two are back-to-back and the third has a checkpoint allowing you to change your strategy slightly. You cannot save the game in between fights, a part from a checkpoint after the first two. 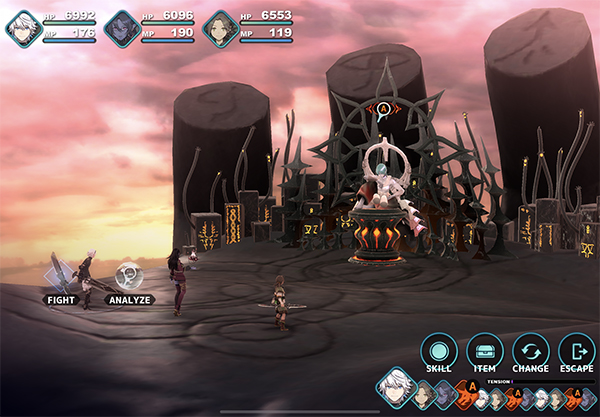 The first form of Jas has low HP for a final boss. What will slow you down is dealing with Jas's energy orbs as leaving these alive will deal tons of damage to your party.

For this fight, you can equip each character in your party with an Elemental Gem corresponding to the Orb they will be fighting. For example, Leo has Fire and Lightning attacks, so he should be used to destroy Ice and Earth Orbs for the extra damage. In the event he does not destroy them, he'll have to tank their damage, so equip Sapphire and Amber Gems to Leo.

You can do this for most of your characters.

Non-elemental damage is also useful for these orbs; Valrika's Arrow Rain deals non-elemental damage and can take out the orbs quite fast, along with Tan's Galf Strike. Ez can use Hyper Grenade in between buffing also to help deal damage to the orbs. These orbs have around 10,000 HP each.

Make sure you try to save your Tension skill to wipe out all the orbs in one go to give you a free round. Make sure Ez is applying Quick All and Attack All to everyone, and apply Attack Down as often as possible.

Jas will apply Attack Up once his health gets low, so you'll need to sacrifice some attacks to get his attack down low. Since Jas has low HP, you should try and get as many hits in as possible; you can tank around 2-4 orbs at a time before they cause a problem.

Check out the video for more tips 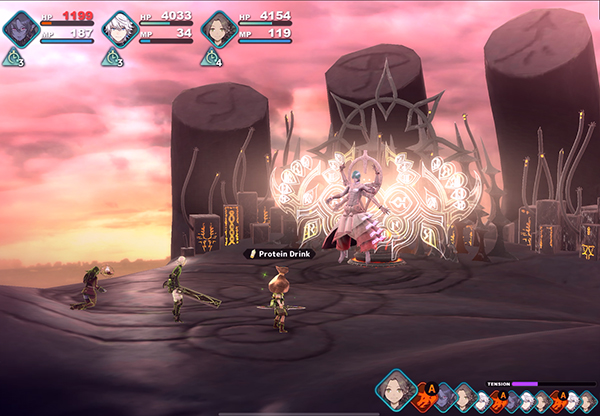 You can't change your equipment for the second form of Jas, so you're stuck with whatever you had for phase one. Also, your health doesn't get replenished and any buffs you had in the first round will all be removed.

Jas's second form is all about managing the main attacks. He has two very hard-hitting party-wipe attacks, but they're easily manageable by switching to a full Guard party of Leo, Zinikr and Kina.

Jas will use three attacks at once; he will cast two single-target elemental attacks (Flare, Plasma, Blizzard, Gaia) and then use Godly Pulse which casts Elemental Weakness and a random debuff like Poison.

Eventually he'll switch to a mode with two spinning circles and block all your attacks to himself. The circles can be destroyed to stop the attack- or you can simple use this time to heal up, buff up and then at the last minute switch to Zinikr, Kina and Leo and have them all use Guard. They will be able to tank the attack and leave them with a half their health left.

His second main attack is where he'll summon a ton of glass swords (similar to Van) and give you a certain amount of moves to try to destroy them all. He will then cast Deluge Of Blades, where any remaining blades will hit you and then will be followed up by another powerful attack. Again, switching to your Guard Party will protect you from this attack.

It's slow-going, but it works and provides safety for all his main attacks. Casting Attack Down on Jas whilst buffing up is also a good idea.

Check out the video for more help:

After the second battle, you get a little break. You can change out your equipment and get a checkpoint, allowing you to pause the game and come back to it, as long as you press the Load button on the main menu and not from the save point. 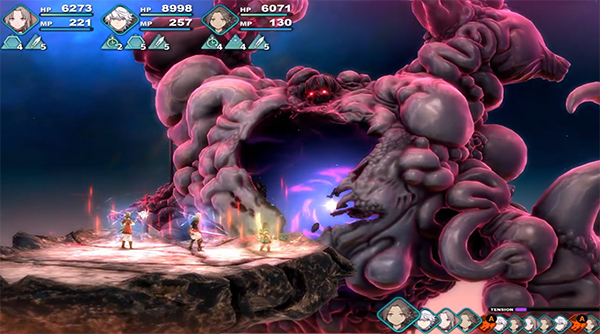 This is a long boss battle. You'll see from the video below that it took us 35 minutes to defeat Jas's final form. It might take you a couple of goes to get used to all the different mechanics.

Jas has high defense this round, so you'll want to try and get Guard Down applied to him as often as possible, and obviously, don't forget Attack Down as he will hit hard.

Jas will start the fight with some simple damaging attacks; you'll get hit twice by Plasma, Flare, Darkness, Radiance and Calamity (which will add a bad status effect to the character who gets hit). You can use Barrier from Kina or Prickle to protect against Calamity.

After two rounds of this, Jas will cast Retribution, which casts Seal, Curse and Poison. He will then prepare for his first major attack, but give you plenty of moves to sort yourself out. If you didn't manage to block Retribution, you should use Talisman on the character ASAP and heal up.

Cast Attack Down and put up Barriers if you can, and then switch to a full guard party of Leo, Zinikr and Kina. Jas will use Big Bang, which will hit all three party members for high damage.

After that, you'll have several moves to heal up and deal damage. Then Jas will summon White Hole.

The White Hole is weak to Dark attacks; the White Hole will constantly summon mobs on it's turn. Switch to Valrika and Cheryl to deal Darkness attacks and wipe out the mobs and the White Hole at the same time. Any mobs left standing will be used towards Jas's most powerful move (below).

Jas will cast Super Buff (attack up, Guard up) and then summon several elemental orbs.

At this point, you should have your Tension Skill ready to use. You will want to use the Tension Skill that will wipe out the most Elemental Orbs (if you see lots of Ice Orbs, use Leo's Solar Flare Ex skill). You'll then want to switch to your Guard party of Leo, Zinikr and Kina to tank the Supernova attack. You can survive around 1.9x Power; make sure Attack Down is placed on the boss during this phase also.

The boss will now rotate between all these attacks. Make sure you get enough hits in so that your Tension Gauge is always full by the time it comes to wiping out the Elemental Orbs. Playing too passively will not generate enough tension (it increases based on how powerful the attacks you use and receive).

Jas will also summon the Black Hole on the second round of attacks. The Black Hole will suck up a character and make them unusable until you destroy it; have Zinikr and Kina use their Holy attacks to destroy the Black Hole.

Beginning Of The End

When Jas hits around 70,000 HP, he will stop whatever attack he is in and change to The Beginning Of The End. You'll have a countdown of 5 rounds to defeat him.

You'll want Ez out to apply Quick All, Attack Up and acting as Healer.

Jas with only hit you with one attack per round.

Have Valrika using Defense Down and Leo hitting hard with his Samidare Fire attack. Once everyone is buffed up, switch Ez out for someone like Cheryl and keep dealing damage before the countdown runs out.

If the countdown runs out, it's game over.

CONGRATULATIONS! You beat the game!

This ends Part Two of the Fantasian Walkthrough. I hope this guide has been useful to you all and have enjoyed playing the game.

There is still more to come! Developers Mistwalker have announced there is more post-game content to be released, with the Void Realm being made available and a New Game + mode added.

So …at 2:17am I was so happy and excited that after 10 strenuous and stressful days, I finally defeated Jas! After seeing the credits and elaborate epilogue, and more dialogue fantastic!!

However after all of that work, it returned me to the main menu. I thought that meant i could return to Shangri La for a do-over… instead it sent me to the beginning of the final form of Jas Absolute to fight him again.

It is weird and frustrating because i honestly don’t want to go through that again.

Can you offer any suggestions? Thanks in advance. :D

Yeah, unfortunately the game ends after the Jas battle and doesn't return post-battle but rather pre-battle. You don't have to go through it again to start New Game+ though; just head to Shangri-La and to the big shrine/mirror thing.

In Sanctum - Laboratory there’s a chest with the Tachyon Medal hidden to the right!