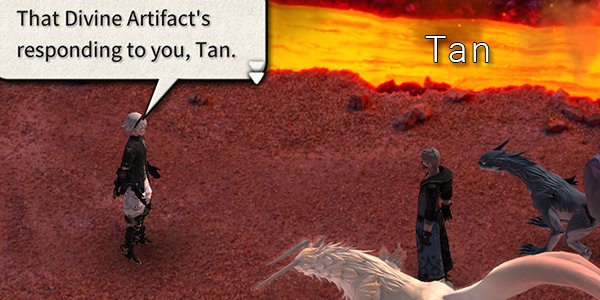 After picking up Cherly and Kina, it's now time to get our final party member and brand new character: Tam. For this, we will need to head back into the Uzra and travel to a brand new location. 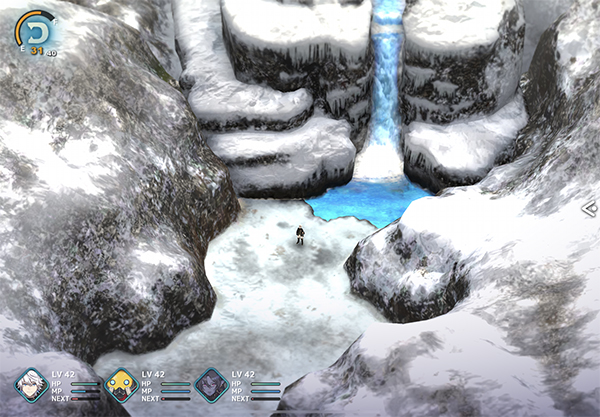 Falcion Bypath can be found at the top-right of the World Map using the Uzra to get there. As soon as you enter the place, a new cutscene will happen in which you will enter a fight with Tam. It's pretty simple so don't worry and this part of the story allows us to finally get a glimpse into Tam's backstory. 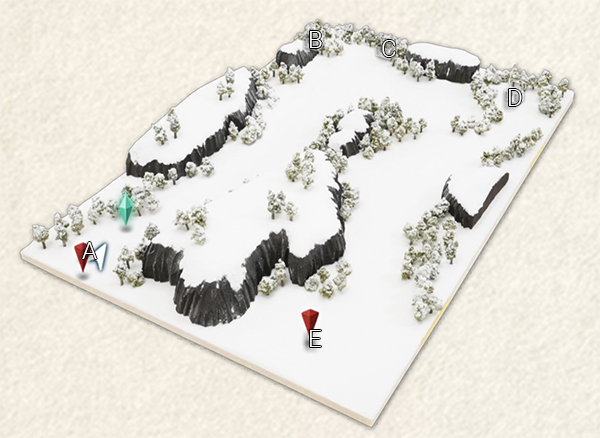 We need to find Tam, so follow your way through the Falcion Bypath and towards (E) Falcion Bypath - Bluff. Pick up these Treasure Chests along the way: 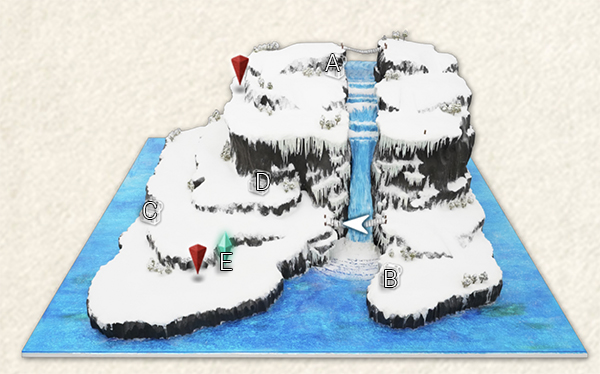 You can pick up the following items here:

Here we will enter a new area called Volcanic Cavern (E) after another part of Tam's backstory is explained. 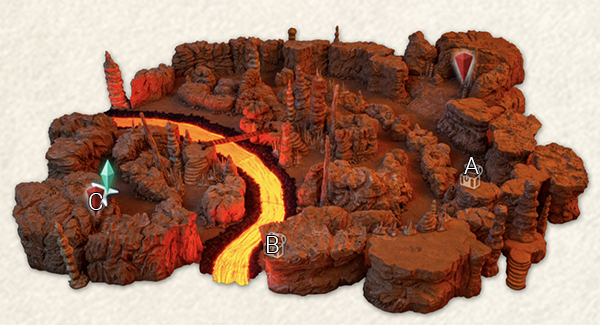 Here you can pick up from Treasure Chests:

Make your way to Volcanic Cavern - Pluton and after another cutscene with Tam, prepare for your next boss battle. 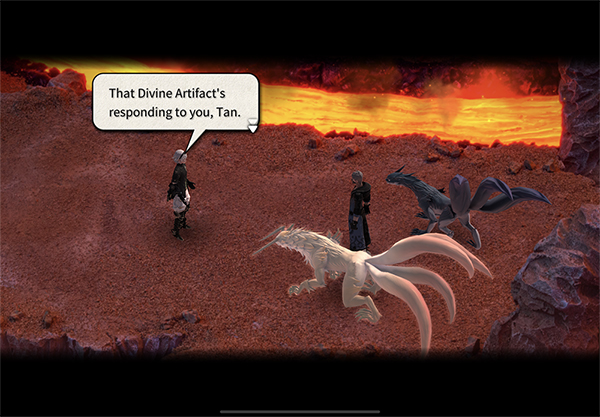 There is one key element to this fight that makes it a cake-walk. Once you have gotten Adolfo down to 30,000 HP, you'll be able steal the Stone Of Control from Blue. Successfully doing this will cause Adolfo to die and allows you to focus just on Blue.

At the beginning of the fight, any damage you deal to Blue is useless, so focus primarily on Adolfo to get him down to 30K HP. Make sure you use Leo's debuff attack down skills to help prevent Adolfo from one-hit KOing your party. Adolfo will single-target your party, as well as performing it's Adolfo Impact skill that hits everyone for around 3K damage.

Keep Ez casting Quick All and Potion L. You can have Tan cast Poison Needle on Blue for an extra hit each turn too.

You'll know when to steal the Stone Of Control from Blue as their is a dialogue prompt recommending you do it. It can take a couple of tries to get a successful steal.

Once Adolfo is dead, focus on Blue. He'll go into Berserk Mode once his HP drops low, but by then you should have enough DPS from Tan and Leo to take him out quickly.

Now that Tam has joined the party, our next set of tasks is to unlock level 2 of each characters' Divine Artifact. New Story Quests should pop-up when you visit Valrika's Laboratory.

For now, we'll finish off Tam's Storyline since his quest is automatically given to us upon helping him. 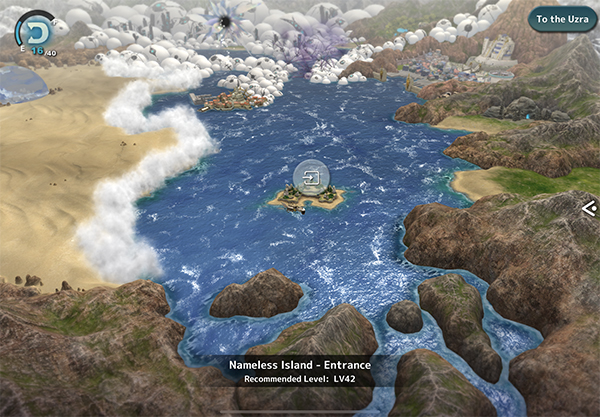 To complete this story quest, we need to head to a place called Nameless Island. It's in the center of the World Map and should be pretty easy to see. 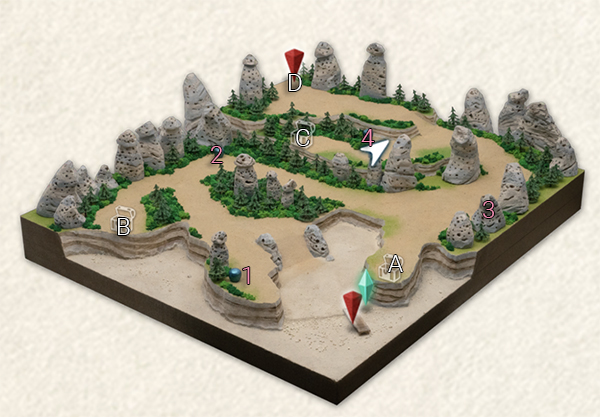 You'll have to get used to watching a few cutscenes that explain more about Tan's past in this area.

This area is also covered in shrouds of mist. You have to touch the Blue Orbs in order to deactivate the mist. Start off by touching the first Blue Orb (1) on your left to allow you to continue forward. Then touch the next one further up ahead (2). Head right and enjoy Tam's first cutscene.

Now head back towards the next map (D). You'll have to ignore the other Treasure Chest (C) for now. 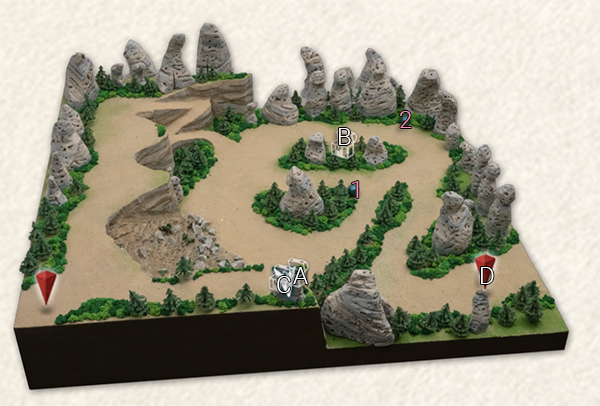 Head to your right and Tam will begin another Cutscene. Continue right and pick up the Order Motes (A) from the Treasure Chest.

Now head left and continue down the slope. Take the middle path and press the Blue orb (1). This will give you access to Treasure Chest (B) at the top that contains Evil Instructions. Press the Blue Orb at the top also.

You can access Treasure Chest (C) to get an Amber L by pressing the top most Blue Orb (2) and walking around it to your left.

Now walk down to your right towards the next map Nameless Island - Depths (D). 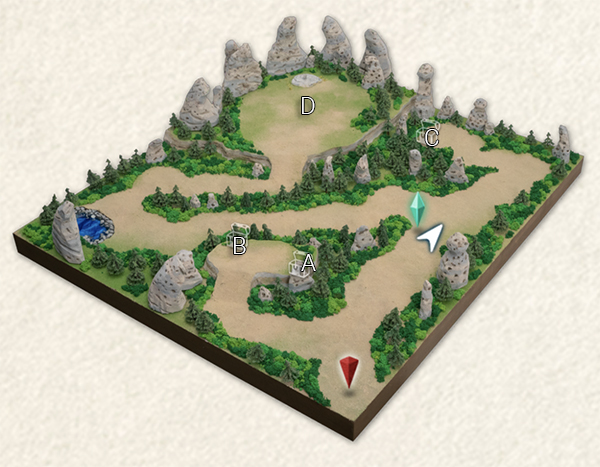 In you take the path to the left you can pick up two Treasure Chests containing Whetstone x2 (A) and Smoky Quartz (B). Now head up past the Save Point and open the Treasure Chest (C) on the right that contains Order Motes x2.

Now follow the path left and you'll come to Tan's final cutscene. Head up to the grave (D) for the next boss fight. 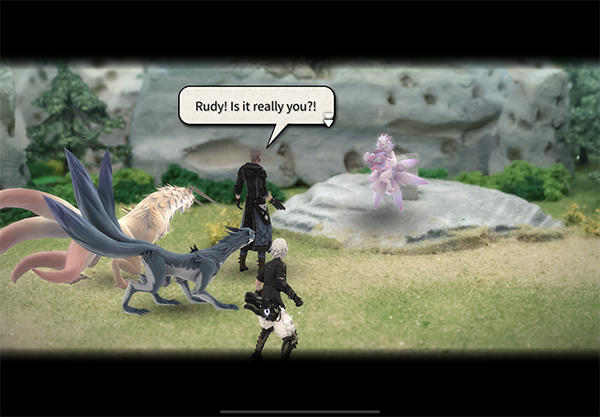 First equip Smoky Quartz to Tan; this can help prevent the Mist attack that Rudy does towards the end of the fight.

Rudy doesn't have much HP, but he does summon lots of mobs constantly and that will most likely be your downfall if you don't manage the fight properly. For this fight, you'll want to make sure you have Zinikr in your party and make sure he has Safe Taunt equipped in his Growth Map.

Because Rudy summons lots of Wolzas, you will need Zinikr to cast Taunt so that they all focus him for low damage. If you have an Opal XL for the HP UP 4 ability that can help also. In the meantime, you'll want to try and get Ez and Prickle into the battle to cast Barrier All and Quick All- but they are not super important.

Your main attackers should be Valrika and Tan (you have no choice). If you have Energize ability from Tan's Growth Map, that can help with the Counter Debuffs. Valrika's Arrow Rain is super important here as she can take out lots of the Wolzas for you.

You'll also want Tan's Tension Skill and use it when the screen is filled with Wolzas to give your party a break. The key to this fight is making sure you heal up Zinikr in between attacks from the mobs, whilst using Tan and Valrika to deal damage to the main boss.

You'll want to watch out for the Rudy Strike move- Rudy will use Charge first, giving you some time to prep for the attack. Have Zinikr use Guard/Taunt, and apply any attack debuffs/shields to help mitigate the damage.

At some point, Rudy will cast Barrier All- if there are any mobs on the screen, they will also get the Barrier. It takes 20 hits for you to destroy the Barrier; you can use Valrika's Arrow Rain and Prickle's Frenzy to help reduce this. Or, you can use Curse on Rudy to prevent him from casting Barrier on himself; Valrika and Tan have a skill that casts Curse.

Rudy can also cast an All Mist / Poison type attacks so if you have any of those gems available for nullifying them that can save you too.

After the fight, you can now pick up those other Treasure Chests too. To get the one at Nameless Islands - Entrance, you must activate the first Blue Orb (1) at the beginning of the map and also the one right (2) after in the middle of the map. Then teleport back to the Grave and work your way backwards. This Treasure Chest (C) gives an SP Capsule.

That wraps up this part of the Fantasian Walkthrough! These two bosses featured in this part of the guide can be tricky, so let us know in the comments if you have any tips for helping to take them down.

I found a third chest in the Lava Stream area containing an elixir if that’s helpful.
I can’t post a video but it’s above the save point on the map.

Thanks to you for this new article.
Rudy gives me a lot of trouble, yet I'm at the level and other bosses much higher didn't give me as much trouble (his 20 point barrier makes me tired).
Your article directed me to a technique I had not tried (taunt with Zinikr and arrow of Valrika) but so far they are failures!

I will keep trying and if I find a technique I will let you know.

Thank you for all this work

Hi, so i don't know how, but i accidentally open the treasure chest C (the SP capsules one) in the Nameless Island before going to the nameless island center, and now i'm stuck and can't move towards point D because of the mist. Can someone help me pleasee. Thank you

Use your Warp Device to teleport out :)

Use curse on rudy, tam or valrika can apply it and it prevents the barrier from going up - much easier than breaking it.

Perfect! Thanks for this- I'll add it to the guide now :D

I’ve been trying curse numerous times on Rudy, but it always misses, whether it is Kina’s cursed staff, or curse needle or cursed voice the little guys are able to be hit, but every time I get a “miss” on the boss. Once the barriers come up the fight feels broken haha