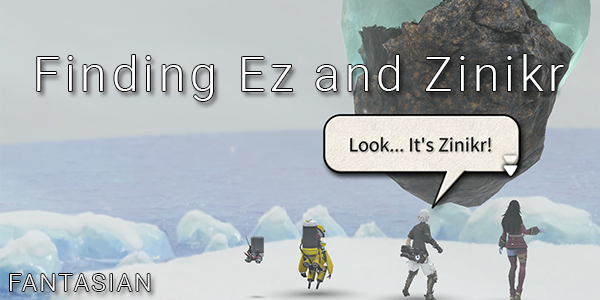 Part 2 of Fantasian has been released and now we can continue with the Fantasian Walkthrough. We last left off at the Chaos Realm, where we fixed our Warp Device to search for our friends.

Part 2 is a more open based quest game than part one was and allows for a lot more exploration of Fantasian. You get a lot more freedom too, choosing what areas to focus on first rather than following a single linear path. That being said, this guide will try to be organized so that the most logical route is taken first. Each quest has a recommended level but also completing certain quests before others will make your life easier in the long run. 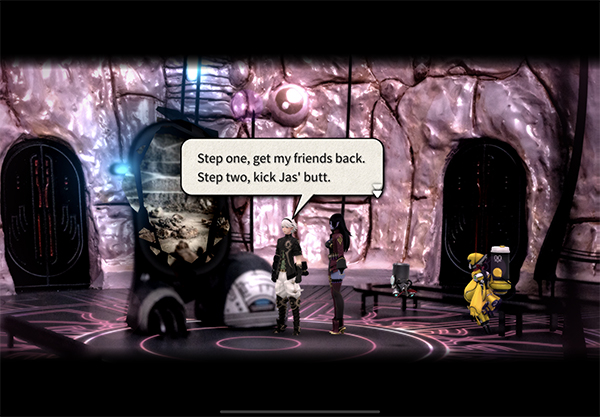 After we defeated Vam, we traveled into the Wormhole and got separated from our friends. We ended up meeting a new character and party member called Valrika, as well as having Prickle and Clicker join our squad too.

We learned about Jas, Vam's brother, who wants to return everything to Zero by spreading Order to the world. Before we plan to stop Jas, we need to find all our missing friends who seem to have been displaced around the world.

After fixing the Warp Device, you can talk to the mirror to begin Part Two of Fantasian. 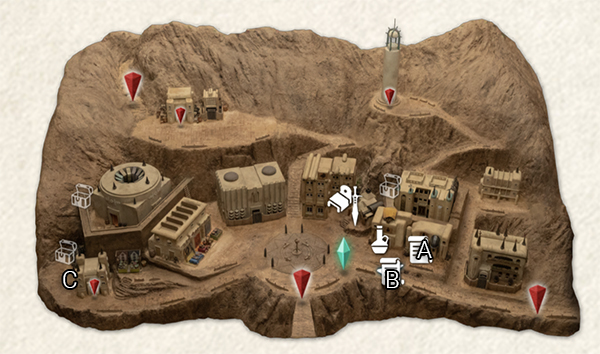 The first destination we warp to is En so we can speak to Sid at the Starry Eyes [Inn] (A).

After a quick cutscene with Sid about an Omelet and the end of the world, he recommends going to visit the Uzra next.

You'll also get your first side quest given to you: Ultimate Rice Omelette (A).

You can also pick up two new Story Quests by talking to the NPCs in the bar: In the Northwest and The Vibra Meteor (A). These are the Story Quests we'll be focusing on in this guide. Feel free to also tackle the side-quests as well.

You might notice that En is a bit different now, with Mechteria falling from the sky. That's not all that's changed either:

You'll want to make sure you collect the all the Missing Robots at some point as it will unlock the Story quest to find Cheryl and Kina.

The plan is first to complete The Vibra Meteor story quest before then venturing to the Uzra to unlock the Uzra ship to travel through the world map so we can then complete In The Northwest. 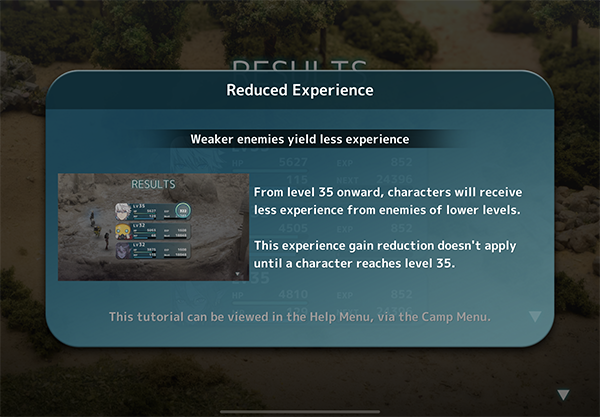 One of the new mechanics of Fantasian is a reduced experience mechanic. The amount of EXP you receive from monsters is heavily reduced if you outlevel them. The idea behind this mechanic is to prevent players from power-leveling and defeating bosses based on dealing damage, rather than figuring out the mechanics of the boss.

It's not too much of a problem, as the boss fights become easier once you understand the mechanics behind each one.

Each character in our party requires rescuing and their story quests all usually have a difficult boss waiting for you at the end. Check out our Fantasian Part Two - Where Everyone Is guide for a quick look at how to find everyone. 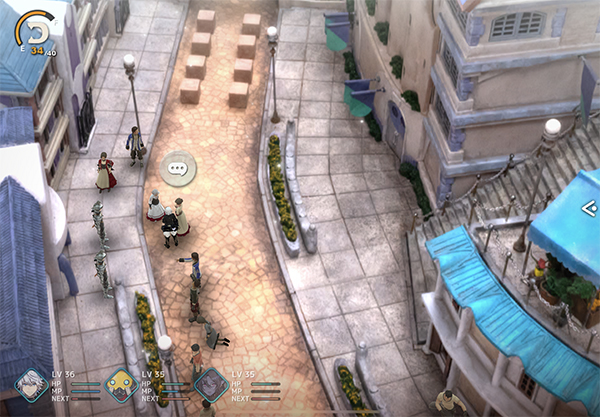 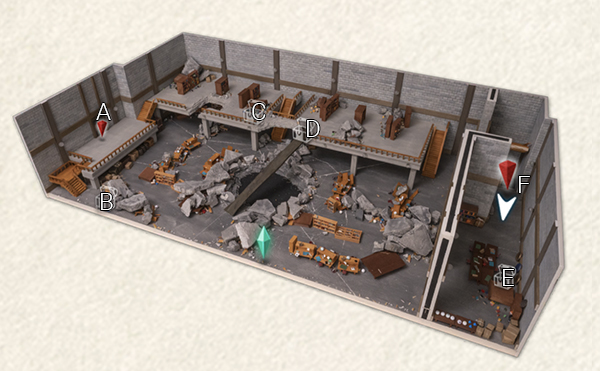 Warp to Vibra - Town Center and you'll notice a bunch of people surrounding a building on your left. This is the Merchants Guild.

The mobs here might prove to be a challenge at first (especially if you're arriving at around level 35). Take your time, and heal in between each fight. You can also initiate the Dimengeon at around 20 monsters instead if you feel that 40 is too many. 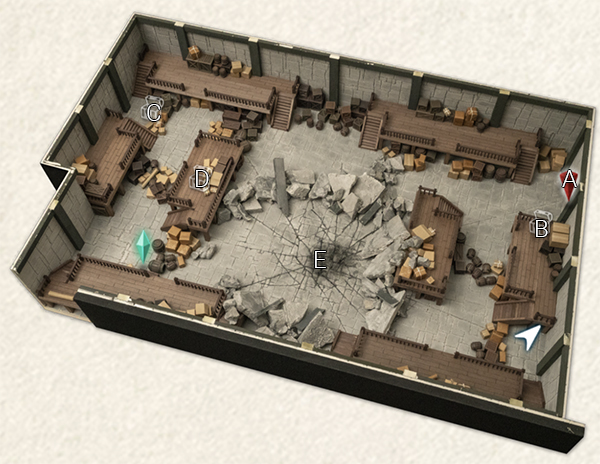 You'll work your way around to a giant crystal that has captured Ez at (E). You're going to have to defeat a boss to get him back. 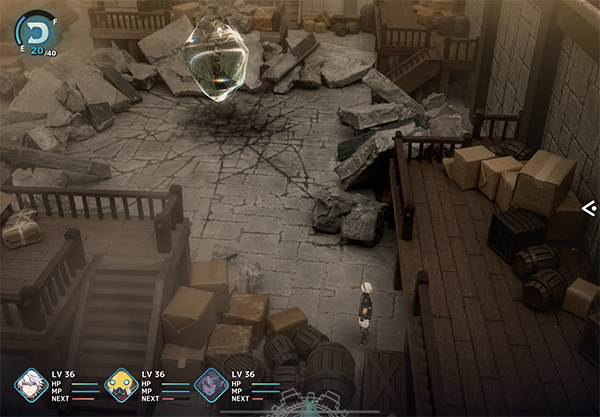 Geo Nova is joined by two Holy mobs that will use Call to summon more of them. A max of four mobs will ever be present and for the most part you can ignore them.

The best tactic for this battle is to use Valrika's Dark skill so that it curves around and hits two Holy mobs and the main boss. Have Leo use Blade Break to keep the Geo Nova's attack down and have Prickle use Barrier All and Heal to keep the party alive.

If you have any Moss Quartz gems, you can equip those to prevent the Seal skill from working, otherwise you can use Words Of Unsealing item.

You can use the video guide below to help.

Ez has joined the party!

You'll teleport back to Valrika's Laboratory and The Vibra Meteor story quest is complete!

You'll also pick up Ez's Blueprint. Now that you've found your first party member, you can use the Change command in battle that allows you to swap party members instantly during a fight.

Before continuing on to the next Story Quest, walk up to the mirror in Valrika's Laboratory and she'll explain all about Mechterite Locations. Any Mechterite you pick up, you can exchange for useful items. The first one allows you to get an Unfamiliar Stone (which gives 2x EXP when equipped!)

You can also pick up Valrika's Story Quest by speaking to her: Survivor Of Chaos.

Now we need to complete the Story Quest In the Northwest to pick up our next character, but first...

Warp to the Uzra - Bridge and you'll be told that you have control of the Uzra! Leo takes it upon himself to start pressing buttons, but unfortunately, this causes the Uzra to flood! 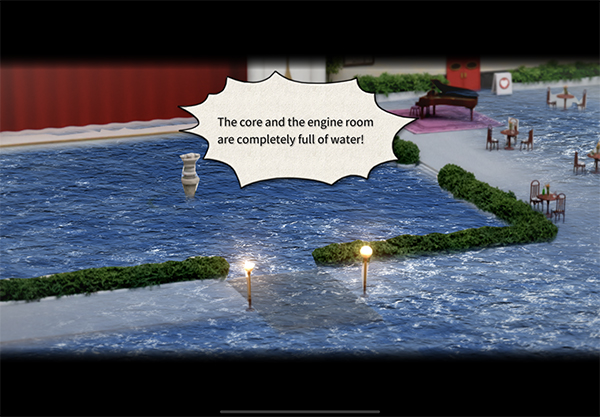 Luckily, Prickle and Clicker are water-resistant so they have been tasked with heading to the Anchor Compartment room to drain the water. That means you only have one party member for this part of the quest.

Head to the Uzra - Engine Room (unfortunately you can't warp there). You'll notice right away that it's completely under-water- and you'll start finding monsters as you head through the Engine Room to  Uzra - Core. Not to worry though, they are easily one or two shot and shouldn't cause you much trouble. 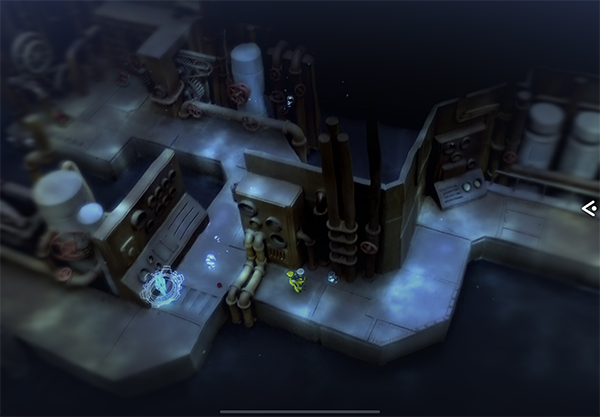 There is a Treasure Chest at the far end of the Uzra - Core map containing 2x Elixirs. Head to Uzra - Anchor Compartment and press the switch.

You can now use the Uzra to travel around the world! 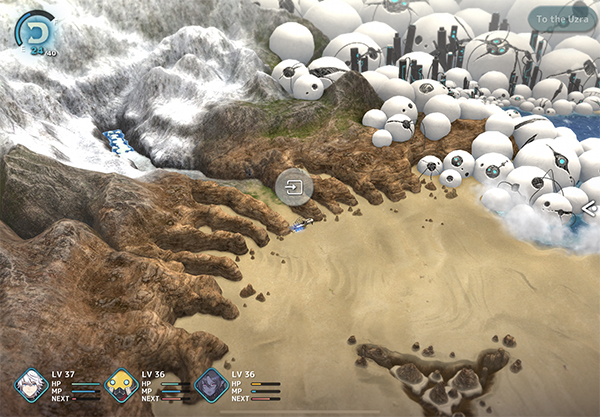 Head to the top-left of the World Map in the Uzra and you'll come to a new location. Pick up the Potion L on your way past the God's Mark and enter Frozen Tundra. 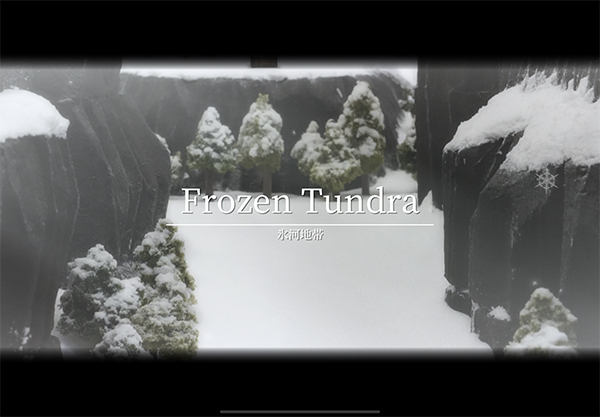 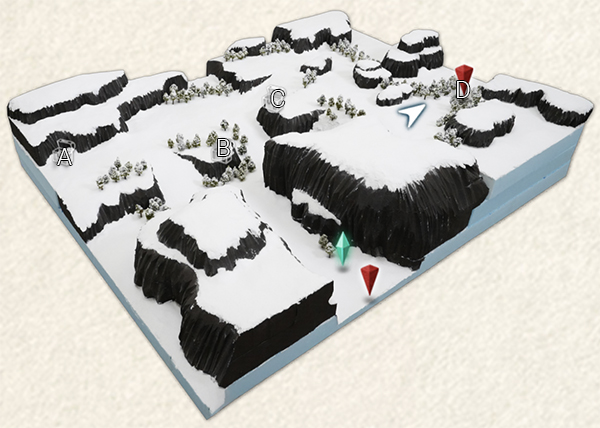 Frozen Tundra is the next destination for where we'll find our next party member. If you have any Sapphire Gems (resistant to Ice) you should equip them now as lots of mobs in this area do Ice attacks.

This is also a great destination to expand Ez's Growth map so he can use the vital Quick All skill. 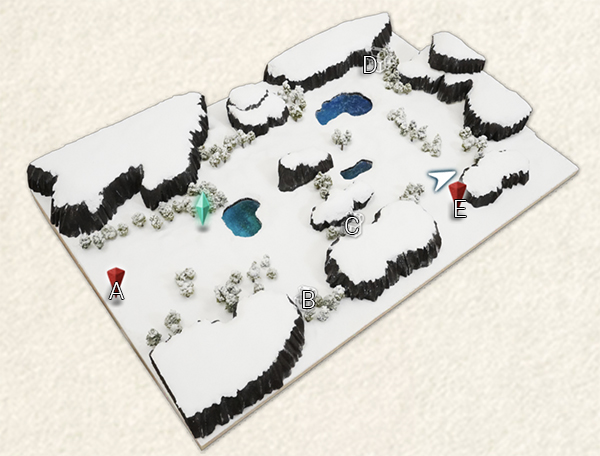 On a wall nearby is another Cinderella Tri-Stars mark. You can attempt to take them on if you wish, though you can always return later when you have better skills and damage to deal with them. 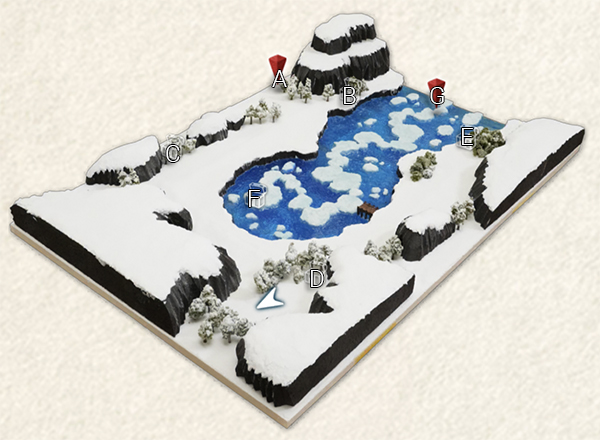 When you arrive at Frozen Tundra - Icy Channel, make sure you pick up Speed Mastery from the Treasure Chest (B) so that you can use Quick All for Ez's Growth Map.

Note: You will find plenty of money and materials on your journey in part two, so don't worry too much about expending them in the early days. For Quick All, you need Clock Of Truth and Chaos Stones, which can be purchased from the Secret Base Vending Machine.

Make your way around the lake and you'll have more cutscenes with Zinikr. Follow the Icebergs towards (G) and prepare yourself for a new boss battle. 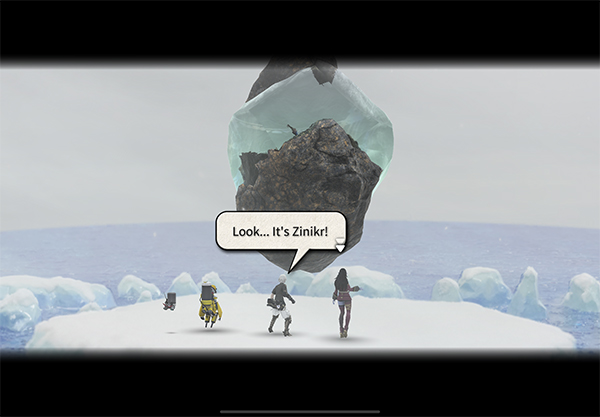 Entrapped Zinikr will change it's Elemental Type throughout the battle. You will need to switch your characters around for each different element weakness to deal damage.

As ever, use Leo and Valrika to debuff him with attack down and guard down. Use Ez to cast Quick All. You cannot cast Slow on this enemy.

When Entrapped Zinikr switches to some elements like Lightning, you don't have any Earth attacks to deal damage apart from Ez's grenade, so use this time to heal up and keep up debuffs.

Zinikr will use Comet attack after a while, which causes lots of debris to fly around him. When attacking, if you hit a debris it will cause the attack to be blocked so you need to time it right.

Use Leo's Solar Flare Tension skill when he switches to Ice element.

He will continue to cast Comet, which will deal several rounds of damage more each time it's cast, so try to have Prickle keep Barrier up as much as possible and have attack down debuff cast on him.

You can use the video guide below for tips!

Zinikr has joined the party!

And that wraps up this part of the Fantasian Walkthrough. You've now rescued both Ez and Zinikr, as well as finding the super useful skill Quick All, which will help in many boss battles to come. Let us know in the comments if you've found any other useful strategies against these bosses!

My God... This game is getting harder than I thought! Can't wait for the next parts of the walkthrough.

A little advice: something that could be helpful to do just after starting Part 2 of the game is to collect all Mechterite pieces, it grants useful items!

great suggestion about collecting all mechterite. i’ve been gathering all i can everywhere i can find it in cities, on the boat, etc — but there is evidently more than i’ve found, as there is a new item (achilles dream or something like that) that needs more mech than i have found, and i’ve found all i can. SO: any clues as to where to find other than “look around” or anyone know of any guide to locations to check (akin to the lost robot guide etc?)

oops, i’m so sorry — posted by question about mech locations without first checking the very latest guides, only looked to see if the walkthrough had been updated (sadly no; dying here waiting for help after zinikr…update update the guide is so good and such a huge help to avoid dead ends/wasted time/wild goose chases). but what do i see but exactly the guide i was asking about and for! woohoo, way to go and thanks!

Use Uzra to go to the wormhole at the top left of the world map, select options to get to a cut-scene that reveals further story.