Fantasian - Kina and Owen - Echoes In The Sandsea - Part 19 - Walkthrough 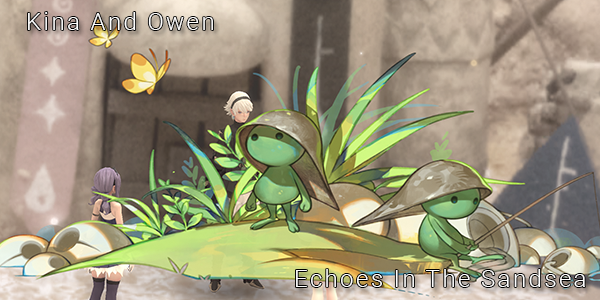 This part of the Fantasian Walkthrough sees us upgrade both Kina and Zinikr's Divine Artifacts to level 2. At this point, you should be around level 45- we did these quests without upgrading any of the weapons so don't fret too much on those.

Pro-tip: At this point, you should have enough SP in your Growth Map to unlock Cheryl's Money Up 1 and Money Up 2 nodes. This will give you 3x the normal amount of G you receive in battle. It's also worth having Ez Master Scavenger 1, Item Drop Rate+ and Rare Drop Rate Up nodes activated to make the most out of grinding.

This quest can be obtained in Valrika's Laboratory.

Kina wants you to check up on Owen, so head back to En and teleport to Owen's Shop. As you try to enter, Kina recommends going to the Southern Forest to speak to Ribbidons. In order to speak to the Ribbidons, we need a recording of a special song which is apparently in Cheryl's Bedroom.

So teleport to Cheryl's Bedroom in Vibra. Go to her chest of draws and interact with it. Now we can teleport to Southern Forest.

If you head to Southern Forest - Gorge and then towards the Mechteria Infested section in the north. 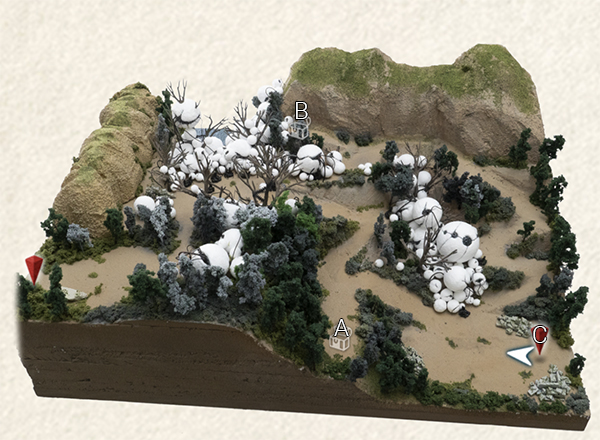 Here you can find some Treasure Chests containing:

You'll come across a Ribbidon as you make your way to the center. Follow it to your right and you'll come to a new map: Southern Forest - Giant Tree (C). 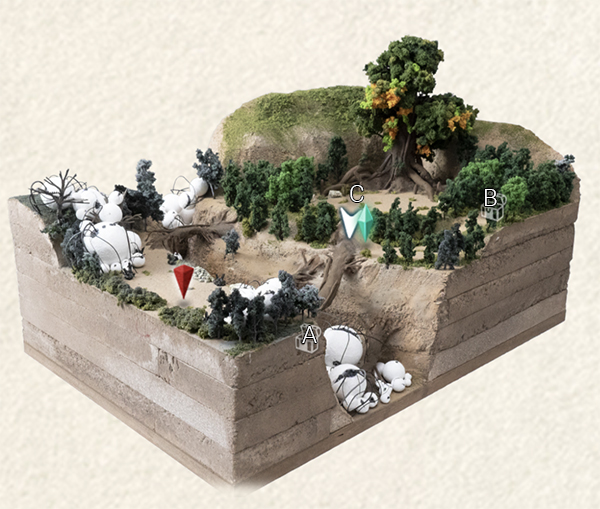 Here you can pick up:

Head towards the Giant Tree (C) and summon the Ribbidons. Talk to the Ribbidons in the circle and you'll have to battle a few. They have resistance to most elemental attacks, so use skills like Arrow Rain and Samidare (non-elemental) to take them out.

After the battle, they'll summon their leader... 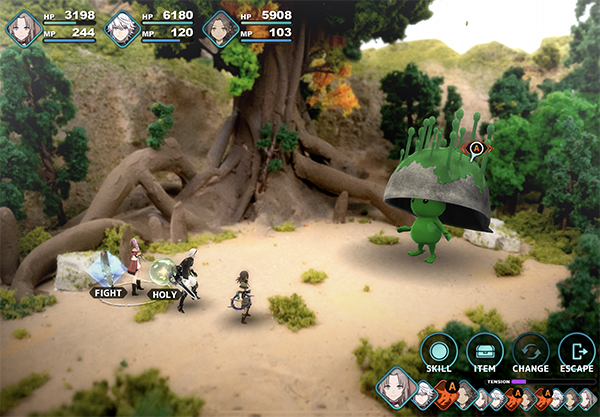 You cannot cast Attack Down or Guard Down on this boss. You can decide which status gems to equip based on the answers to the questions below; we did Mist All and some Ice Resistant Gems.

This boss fight is quite challenging. Ribbidon will ask you a series of questions, and depending on your answer, will inflict certain attacks against you.

You'll want Kina to cast Barrier All to protect from status effects and have Leo using Samidare (non-elemental) for damage. Ez can be the healer and buff.

Here are all the questions and results:

What is the best weapon against a formidable foe, ribbit?

Being as cool as ICE - Blizzard | Ice All

Ribbit! What is the primary rule of combat?

Offense is the best defense - Attack Up + Guard Down | Headbutt All

Defense is the best offense - Guard Up + Attack Down | Slap Combo

What do you prefer: an acorn or a rock?

An acorn. - Acorn Of Beginning (regens All)

Which is to be feared more: divine judgement or earthly rage, ribbit?

I tire of this, ribbit. Shall we take a break?

Which pair do you desire least, ribbit?

Which do you treasure; your strength alone, or your bond with others?

My strength alone - Attack Up, Guard Up | Lightning All

My bond with others - Summons 3 Ribbidons.| Earth All

A dangerous smoke spreads. What is it, ribbit?

A miasma that slowly drains life. - Casts Poison All | headbutt

Ribbit...I'm getting sleepy. How about a breather?

What is the proper curse for a curse, ribbit?

Tell me, ribbit -- which would hurt you most in its absense?

When the boss gets down to it's last 15K HP, it will summon 3 Rabbidon and the flying rocks that can block attacks if you don't time it right. It will also use Dreadnought which casts slow on all and deals lots of damage.

Check out the video guide for help:

After defeating the boss, head to Owen's Shop where Kina and Owen have a moment.

A short cutscene later and a Ribbidon goes to stay with Owen. This will also allow you to accept the side-quest Metal Ribbidon from Tan at Valrika's Laboratory. 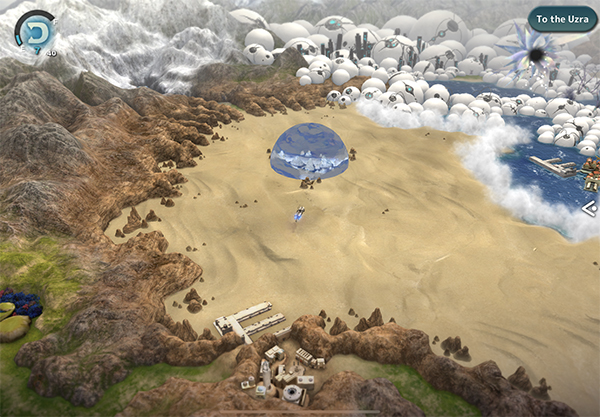 For our next adventure, we need to head to Triangle Of Calamity, which is a pyramid surrounding by a blue bubble on the world map to your left. Once you interact with the pyramid, time seems to stop and you're back on board the Uzra.

If you head further down the ship, a giant blue orb will start revealing Zinikr's backstory. 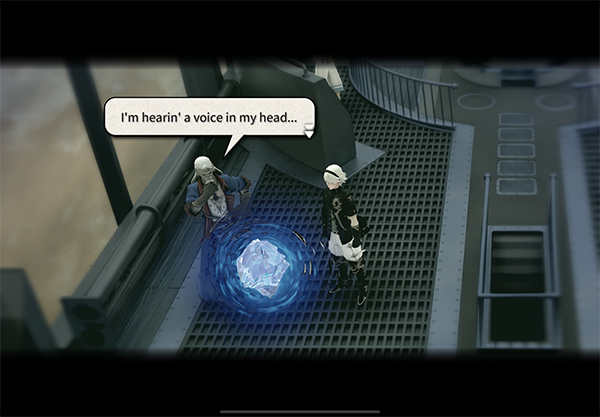 Head down the stairs to Uzra - Bow Walkway and find the next blue orb.

Next head to Uzra - Deck (starboard) and head towards the swimming pool. There are random battles around here, so be careful.

Head inside to Uzra - Hall. Go into Cheryl's state room and find a Blue Orb there. Exit and then interact with the blue orb on the dance floor.

Next head to Uzra - Engine Room. From there make your way to the Uzra - Core. You'll find another Blue orb in the center of the room.

Finally, head to Uzra - Anchor Compartment and pick up the last Blue Orb. Head back to the Uzra - Engine Room. 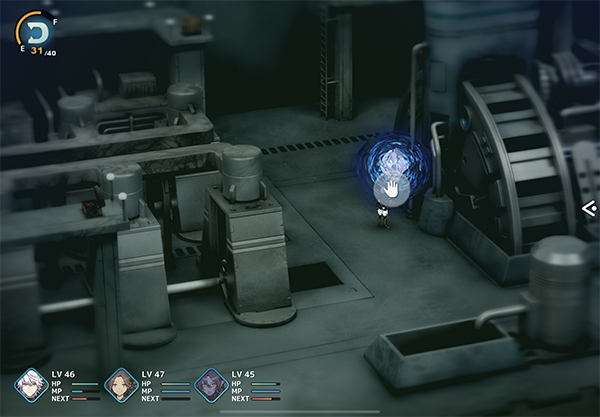 In the middle of the Uzra - Engine Room you'll find the final blue orb which will summon Yim... 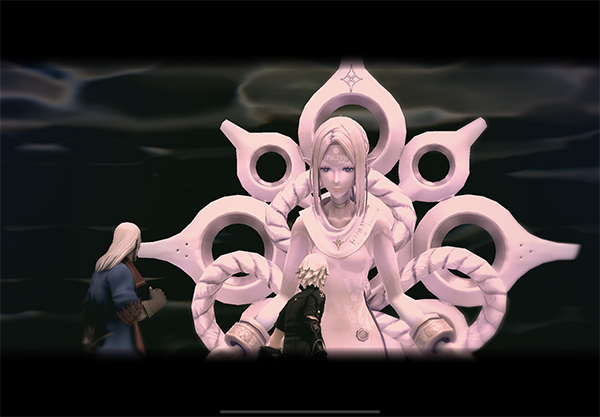 Equipping Diamond (Holy Resistant) and Phantom Quartz Gems will help you with this battle.

Yim will start the fight slow, casting Radiance, Darkness and Slow attacks. You should be buffing up Valrika with Ez so that she is prepared for Nihil Summoning.

The other part of the battle is Distortion of Reality; this is a slightly random game where Yim will duplicate herself into three clones. You can try to guess which one is the real one and trust your luck. A better way is to use the Taunt skill to reveal the correct one. Each time you destroy a clone you will be damaged pretty badly if it's not the real Yim. If it's the right one, Yim will return for more fighting.

Yim can also cast Curse All on everyone, so have some Talismans handy if you don't have the gems equipped.

Once Yim goes down to her last 50K health, she will turn into her rage mode, which means she can do some double attacks. By this point, you should just continue the process and take her down!

Check out the video guide below for more tips:

After defeating the boss, Zinikr's Divine Artifact is upgraded!

You should also receive a new Story Quest titled Guided By Yim.

That wraps up this part of the Fantasian Walkthrough. Yim might be one of the toughest bosses yet... it's going to get harder! Let us know your strategies in the comments.

I accidentally stumbled into the Yim mission before beating several other recommenced bosses/quests and I’m low on items to use my haste up enough during the fight to get enough hits on the bosses Nihil summoning. Not being able to warp and come back is a nightmare and I don’t know what to do at this point. Lol. After about 10 attempts I got her down to her last 50,000 HP once.

You can get out of the Uzra by going all the way back to the bridge and interact with the steering wheel, which will allow you to leave and then you can teleport to get some items.

Also in the upper right corner on the ‘battle again’ screen is a ‘Load’ button. This got me out of there a number of times!

Hello!
Use taunt to know wich Yim is the real one.

Great tip! I'll add it to the guide :D Thank you!

Was this patched? I had two Yims react, and one of those was the real one… the one that didn’t react to taunt exploded when I attacked it.

To identify correct Yim in distortion of reality, you need to do Taunt BEFORE Yim does distortion of reality so that you can trace the indicator. I basically had Ziniker guard/taunt the entire time, if you equip him with MP every turn and HP every turn he’ll basically take care of himself so you can use Ez for status effects and help with nihil summmon, and valrika for damage using arrow rain. I have valrika with pezaotite so she never runs out of MP

I read that you have to complete Zinikr questline before you can get Tan? I'll find out in about 20 minutes LOL, but does anyone know if this is the case? Ive been running around for almost an hour, I just finished part 16 of this walkthrough and cant get to Falcion Bypath for the life of me. Thanks

You can get to falcion bypass before zinikr’s quest

amendment above; Money up skills are in Kina's Growth Map, not Cheryl's :)

Good lord!! I thought I would be stuck forever trying to beat Yim - it was by accident I stumbled upon this one before doing Bernards Lab quest and Kina’s story. It took me about 7 tries ?? before FINALLY defeating Yim. Some points:
- I used Taunt to try determine which is the real Yim but to no avail. My eyes feel permanently cross eyed trying to follow the real one.
-Tension skills are sweet but it was Zinikr’s Payback skill that saved me (10k+ damage).
I’m gonna do some chill side quests for now, was actually traumatised by this one ;(((