This part of the Fantasian Walkthrough takes us to the Chaos Realm. After defeating Vam, we find out that he has an even more eviler brother named Jas.

Just after the battle with Vam, you might want to unequip any important Gems from Zinikr and Ez, as they will be leaving the party shortly. 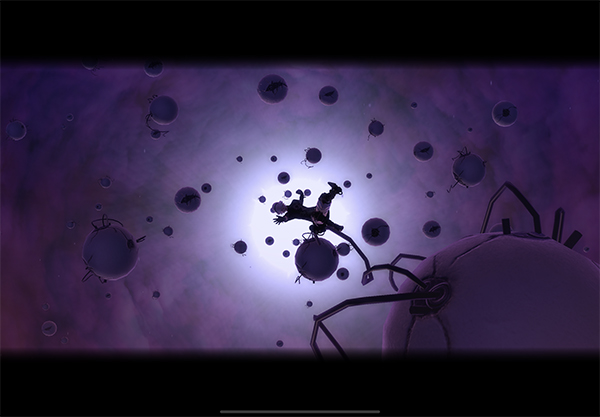 As you jump into the Wormhole, you end up in a new place called Chaos Fields.

Turn off your Dimengeon as you are currently on your own, and you don’t want to fight 40 monsters all at once! 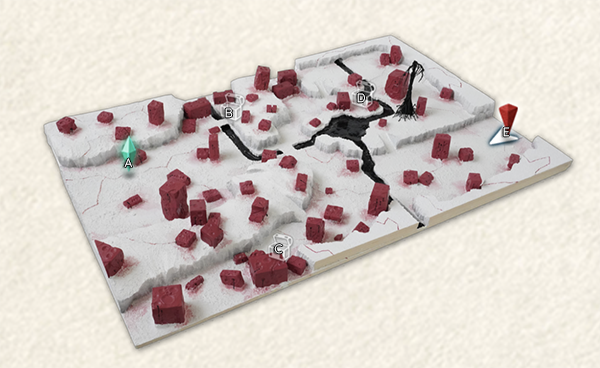 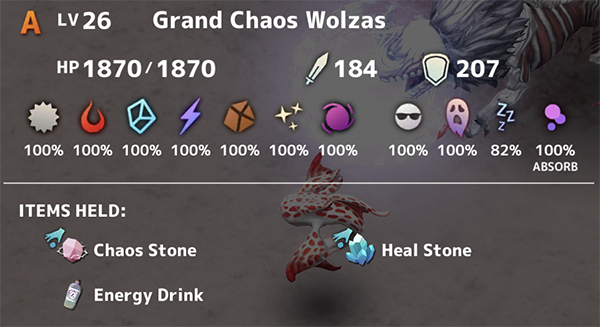 If you head past the Save Point (A) and straight forward across a bridge you’ll find a Treasure Chest (B) containing a lolite. Now head right and you’ll come across another Treasure Chest (C) with a Heal Stone inside. Head north and across a small bridge.

A cutscene will happen in which Leo’s energy fades. Leo sees a vision of his dad walking, which seems to give him strength to carry on. Follow the path up a ramp and you’ll come to a Treasure Chest with an Ether L (D). Now head across the river and go right.

A new cutscene will happen in which a mysterious character seems to be watching you.

Head past the tree and down the ramp and then head north to the next map (E). 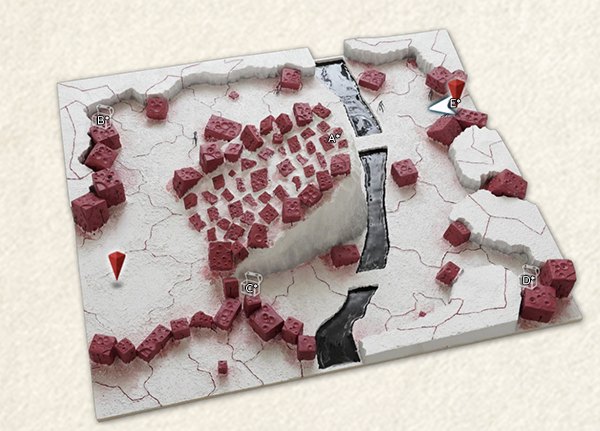 You’ll see your dad and the boy version of Leo before you, trying to climb a hill. At the top of it is the Gauntlet (A*) Leo’s dad was working on.

The Divine Arm grants Leo access to the Growth Map. This is a new way to upgrade your characters- it’s quite limited in Part 1 of Fantasian, since the level cap is level 35. But you can take a look at the Growth Map and see all the different abilities you’ll be able to unlock one day! 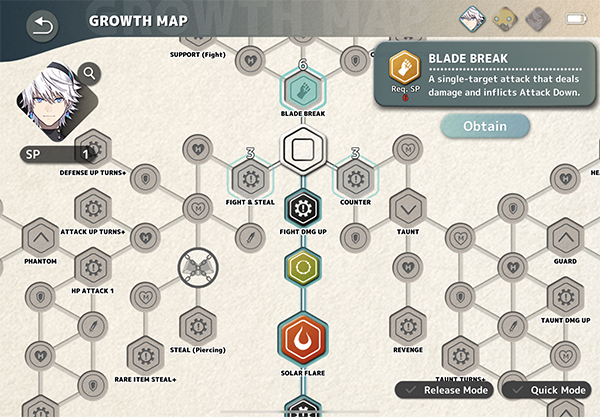 Head back down the mountain and follow the map left until you come to a Treasure Chest (B*) containing 3x Potion L. Now follow behind the mountain right and you’ll come across two familiar faces… 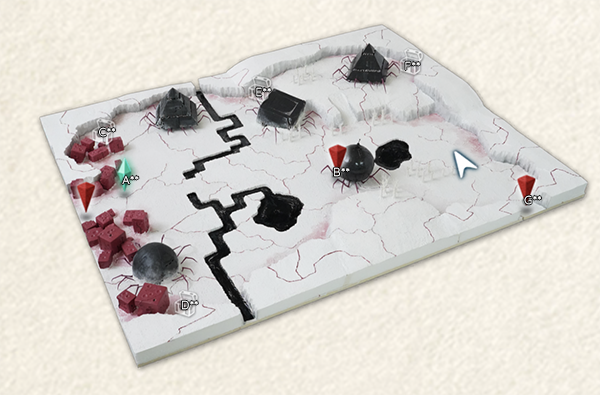 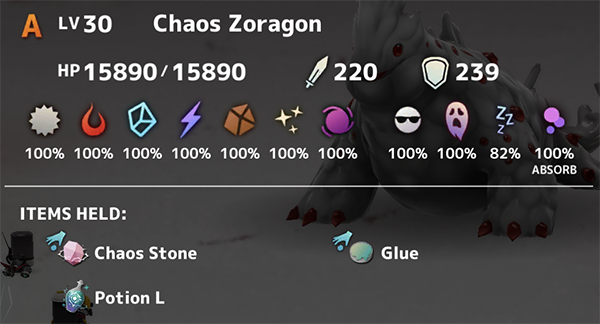 The boss can use Poison against you, so have Prickle cast Cure to get rid of it. His single-target attack will also destroy any barriers cast, so don’t bother trying to get them up.

Instead, have Leo use Helm Bash and constantly use Samidare to deal hefty damage.

When his health is low, he’ll use Call which summons several mobs to aid him. Focus on getting rid of the Chaos Kackles as they will block any mobbing attacks. Prickle’s Barrier is more useful here to allow Leo to tank hits.

Head forward towards the giant black looking spider building (B**).

Use the Save Point to save and then head over to the picture on the right. Immediate a new character called Valrika appears and explains the situation; apparently she knows your dad!

Head to the Research Library where you can learn all about Leo’s Dad’s past. After reading all the journals, Leo will head into the Terrace to speak to Valrika. Leo decides he wants to find all his friends and not give up like his dad did…

Valrika gives you a powerful Warp Device that needs to be paired to a mainframe computer in order to work. Head to the Laboratory - Hall and you find out you don’t have enough power to work the device. You’ve got to go and find some of these powerful energy crystals.

You can now purchase items and weapons from the shop. You can get the Bionic Bangle that gives Auto-Regen as soon as the battle start, but the rest of the equipment you should already have.

Make your way back to the Chaos Fields. Now that you have a party of three, it’s safe to turn the Dimengeon back on. 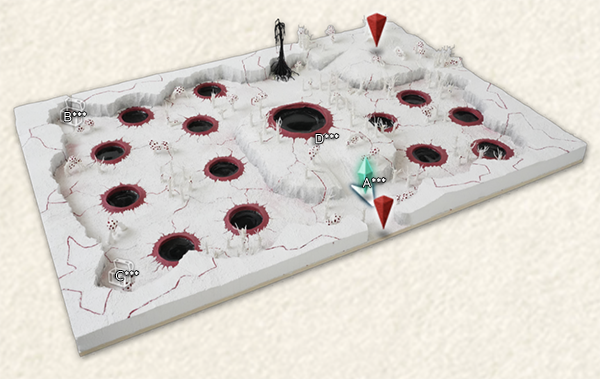 Now head up to the next map and a short cutscene will play out. In order to get the stone (Blue Ore), we need to amplify the miasma pools. You will need to memorize the order in which they erupt. Then go to each pool and activate it in the order they appeared.

In this map Funi will appear. You can grab a Rose Quartz off him if you follow his requirements. 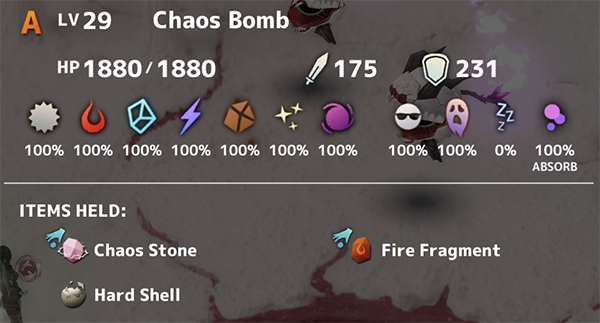 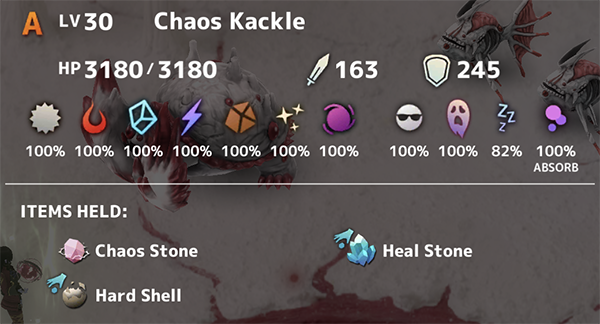 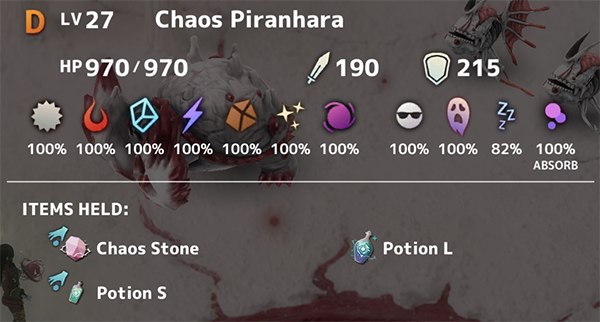 Once you have turned on all the miasma amplifiers the Chaos Serpent will appear.

Now is a good time to equip any Rose Quartz you may have as they will make this battle a lot easier. 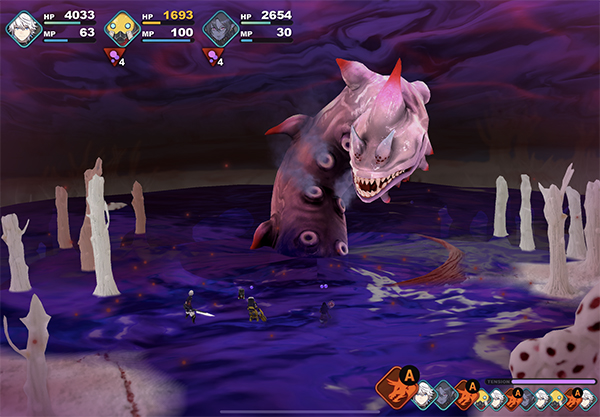 Have Valrika cast Slow as often as possible. Crush and Break are also useful to take down the serpent’s defense and attack power.

At about half HP, it will use Poison Floor. All characters will be inflicted with Poison and you cannot get rid of it. This is where the item Rose Quartz comes in as it completely blocks any Poison.

The Chaos Serpent will use Poison Feast; if it hits a player with the Poison Status it charges the Chaos Serpent’s main attack: Poison Breath. It has 3 charges until it’s unleashed and everyone will take 1-2k damage.

You can use Prickle’s Barrier All to prevent the Poison Status for 5 rounds. However, the Chaos Serpent can attack and smash the barriers anyway.

Congratulations on defeating the last boss of Fantasias Part 1! You'll now return to the Laboratory when you will power the Warp Device and travel back to En.

If you head back to the Chaos Lakes after completing the game, you can take the Dual Chaos Serpents. It is highly advised to have the three Rose Quartz items equipped to every character to avoid Poison. 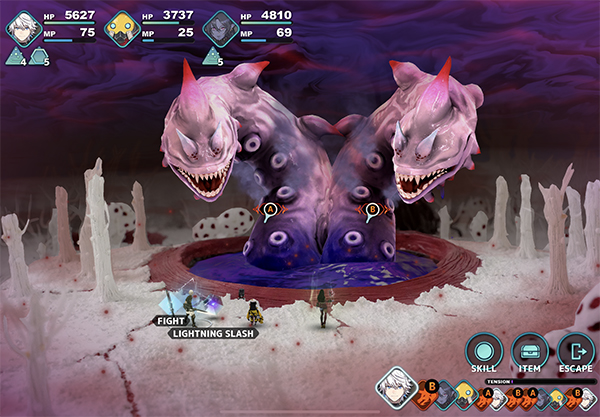 The boss acts exactly as the first Chaos Serpent- just this time you have to take down two of them. The boss is rather easy if you understand the mechanics of the first round.

The Chaos Serpent has 50,000 HP this time round, 5K more than the first time you fought him.

Focus on taking down one Chaos Serpent at a time. You'll need a few Potion Ls and Ether S to top you up in this fight- but it's well worth it as he drops 50,000 G!

You can keep repeating this fight to farm G until the next part of Fantasian comes out. Nice!

** THANKS FOR READING THIS WALKTHROUGH **

There is currently know official release date for Part 2 of Fantasian, apart from that it should be sometime in 2021.

If you have any feedback for this walkthrough and how we can improve it, let us know in the comments!

There’s a chest in the first part of the map that seems unobtainable, it’s like it is sitting on top of a span of rock? There's quite a few unobtainable chests in the game. Looks like in Part Two we might get new abilities to jump to these spots.

Fantasian release date for the part 2 is now August 13, 2021. In a couple of days, that is. Congrats to everyone!