The end is in sight- well sort of- before we head off to the God Realm a unique Story Quest called The Six Elements allows us to unlock some special Growth Map Nodes. You'll get access to the most powerful abilities in the game, making the up and coming bosses a lot easier.

If you haven't already, you can get The Six Elements Story Quest by entering the Communication Network. You can do this from Valrika's Laboratory - Communication Room.

As soon as you get the quest, a short cutscene will feature all six elemental god marks that you might have noticed when traveling the world map of Fantasian. There are six in total and you're going to have to visit each one if you want to unlock every character's main attacking skills.

Each God Mark is a Elemental Trial. The monsters inside the trial are all of that mark's element and there is a boss waiting for you at the end of each maze.

You'll also come across some Funi monsters, which allow you to get the Elemental Resistant Gems pretty easily. These are very useful for the up and coming boss fights. 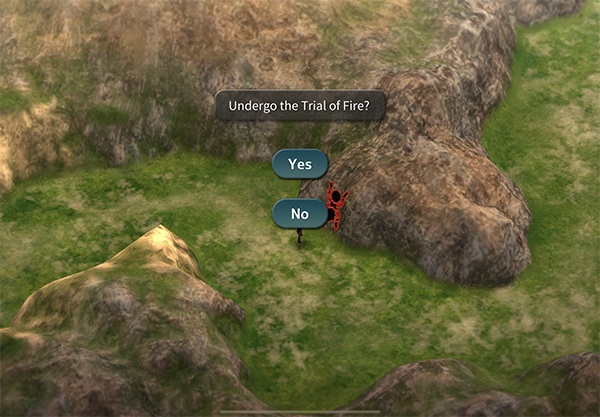 The Trial Of Fire can be found between the Southern Forest and En. All the monsters in here are Fire-type; so equipping any Garnet gems to your party will help you. The Funi monster will drop Garnet L if you finish his commands. 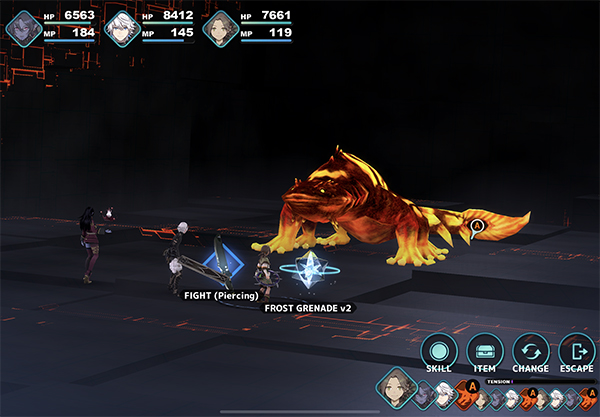 You should equip any Garnet Gems you have to resist the boss's Fire Attacks. Have Ez casting Quick All, Attack All and healing.

This boss is weak to Ice- so bring out Cheryl and have her use Ice Strike on the Tail. Defeat the tail first and then move onto the Salamander.

Venom Salamander can cast Slow and Fire Resist Down, but you really only need to worry about his main attack Ground Flare, which happens when he starts to stand up. At a certain point he'll also use Fire Field, which will make Fire attacks do more damage.

Overall, this boss should be easy. Both Cheryl and Valrika have Ice attacks.

At the end of the fight, you'll obtain the Flame Codex! The Trial Of Earth can be found between Ancient Hill and En. All the monsters in here are Earth-type; so equipping any Amber gems to your party will help you. The Funi monster will drop Amber L if you finish his commands. 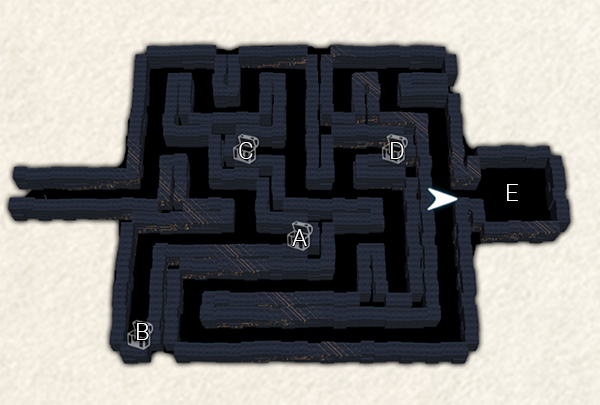 This boss can be a little tricky. Equip any Amber Gems you have to your party and again have Ez use Quick All, Attack All and Heal.

This boss is weak to lightning, so having Prickle and Leo in your Party can be very useful, especially if Prickle has the Mega Barrier Skill. It is also vital to keep this Boss's Attack Down at all times as it will hit you very hard.

Giga will hit you with single target attacks that have Action Delay on them. His Wipe Out move will hit all three party members; so it's good idea to have Prickle's Barrier All up to help negate some of this damage.

Giga will use Stance Of Desperation, which is his super-power move. You'll get plenty of moves whilst he charges this up; you'll want to have Prickle casting Mega Barrier on everyone and Ez have Guard Up. You'll also want to make sure Giga has Attack Down. When ready, Giga will unleash Hail Mary which will wipe out your party if you do not have enough protection up (you can also use Guard with Leo, Kina and Zinikr). The Trial Of Ice can be found on the way to Frozen Tundra. All the monsters in here are Ice-type; so equipping any Sapphire gems to your party will help you. The Funi monster will drop Sapphire L if you finish his commands. 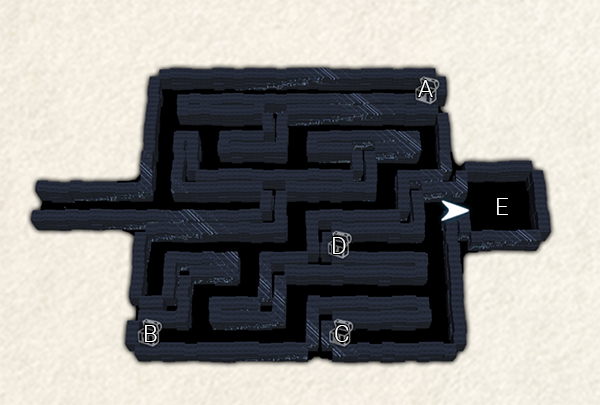 This boss is probably the easiest of the lot, especially if you've already completed the Fire Trial. Equip any Sapphire Gems you have to prevent the Ice Attack Damage.

With this boss being weak to fire, have Leo use his Samidare Fire skill to deal lots of damage. His Flare Slash is perfect for when Frostian summons it's icicles.

Frostian will use it's Ice Spike move to attack all three players- but the damage shouldn't harm you if you have Sapphire Gems equipped. At a certain point, Frostian will also summon giant Icicles in front of it; use Leo's Flare Slash, Valrika's Arrow Rain and Ez's Fire Grenade to take them out. This will prevent Frostian using it's power move.

Frostian will use Ice Field later on in the fight to increase Ice damage, but really, this boss is a cake-walk.

Defeating this boss will unlock the Frost Codex! 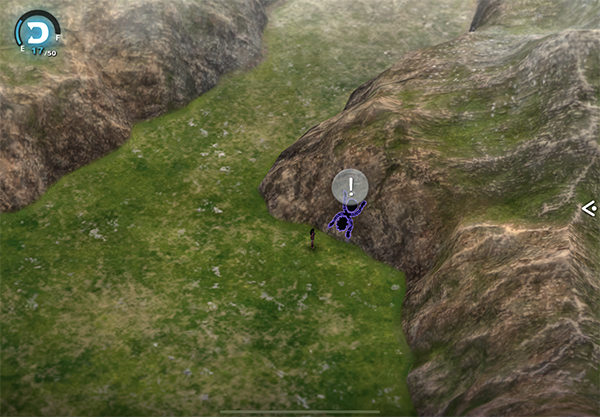 The Trial Of Lightning can be found just before heading towards Falcion Bypath. All mobs here are of Lightning type, so equip any Amethyst Gems. The Funi monster will drop Amethyst L if you finish his commands. 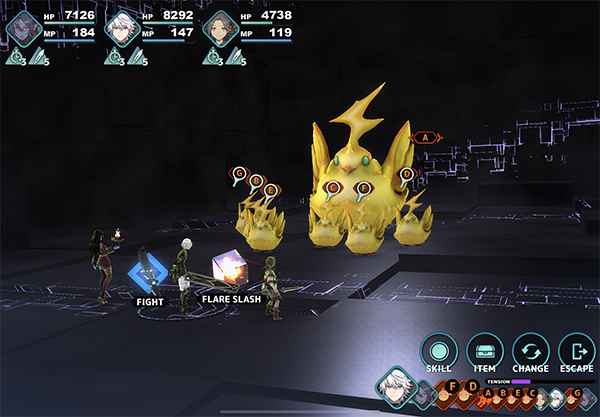 Equip any Amethyst Gems you have to negate Lightning attacks. For this fight, you'll want Leo, Valrika and Ez. Valrika and Leo can help keep the mobs at bay and Ez for his amazing buffs.

Plasma Wing has a mechanic where each time you hit him, he will summon two mobs (but lose 20,000 HP). It will stop summoning them when it has less than 30K Health.

You can tank most of the damage from the mobs, but watch out for the Plasma attack, which hits all three for lightning damage. If you get a Tension skill, you should be able to wipe out any mobs the boss has summoned.

After defeating this boss you'll have unlocked the Bolt Codex! The Trial Of Dark can be found at the north of the World Map and to the right of Mechteria Infestations - Center. This trial features Dark monsters, so equip any Onyx Gems you have. The Funi monster will drop Onyx L if you finish his commands. 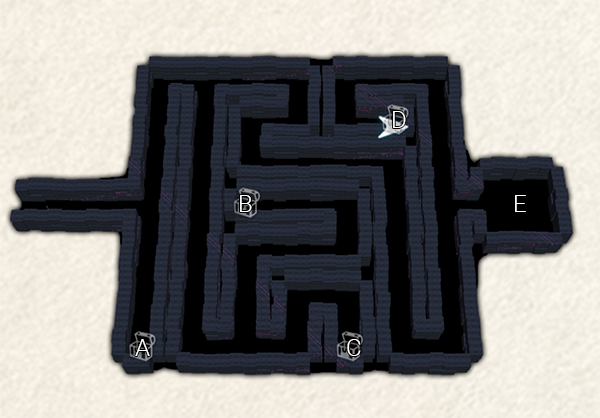 Equip any Onyx Gems you have to your party and if you have a Lolite Gem to auto-revive after death.

This boss has an annoying mechanic of casting Death on your party. At the beginning, it is easily manageable; however, as the Boss's HP drops below a certain amount, it will start casting Death more often. You'll have to be extremely careful with your move choice- you will want to make sure all characters have Quick All at all times so they can revive.

Abyss Rush can also use Abyss Cannon that hits all three party members for Darkness damage. You'll want to make sure you're healing as much as possible after revives since this move can easily wipe you out.

After defeating this boss you'll unlock the Shadow Codex! The Trial Of Holy can be found next to Shangri-La on the World Map. This trial contains Holy mobs, so equip any Diamond gems you have. The Funi monster will drop Diamond L if you finish his commands. Equip any Diamond Gems before starting this fight to protect from Holy damage.

Radiant Puppet will start the fight with a Barrier, so have Leo and Valrika use their Samidare and Arrow Rain attacks to destroy it. Have Ez cast Quick All and Attack All on everyone.

Raidant Puppet will use Summon to call forth 5 mobs; Valrika can easily take them down in one shot of Arrow Rain with Attack Up applied.

At about the half-way point, Radiant Puppet will gain an additional weapon; meaning all it's attacks are now doubled. When it uses Barrier, it'll take 10 hits and when it uses summon it will summon 10 mobs.

Still, this boss is pretty easy to take out.

And that finishes The Six Elements Story Quest! This was a bid of a grind but hopefully these maps can help you navigate to the Treasure Chests a little easier without having too many random battles.

In the next Fantasian Walkthrough, we'll head through to the God Realm using the Communication Network.

The ice boss was pretty easy…I like how your picture of it is it crumbling in defeat. Thanks for the guide!

Not sure why, but I cannot get this quest eventhough I have already completed the cut scene about warping to god realm and already opened all the upgrade tension quest

Giga Minotaurus is IMPOSSIBLE. It’s Hail Mary attack does something like 16000 per person. What’s the trick to surviving that?!? This is the last of the 6 trials I have… and this boss is harder than anything I have dealt with yet - it just seems… impossible. ☹️

I survived the attack with mega barrier and defense up buff. Note that, Ez was knocked out with Leo and Prickle having less than 100 HP left. My team was all level 52.

One more thing that should be helpful is using guard on top of mega barrier.

Trial of darkness was easy for me by having Leo hold a death null gem. Plus, Valrika has a weapon with same effect. I only had to revive Ez. Note that, death sentence didn’t work on Ez once. This might be related to his ultimate weapon.