This is the second part of Fantasian Walkthrough where you enter a new town called Frontier Town Of En.

You've escaped the Thaumatech Factory to a new desert town called En - New District. Unfortunately, it seems you've left behind your Robot friends and now have to travel solo.

You'll notice right away a Treasure Chest (F) behind you. You'll need to acquire an Iron key to unlock it however, so leave it alone for now.

Walk past the Residence house (you can't enter it) and past the cats. A 100 G can be found in one of the barrels up the slopes. 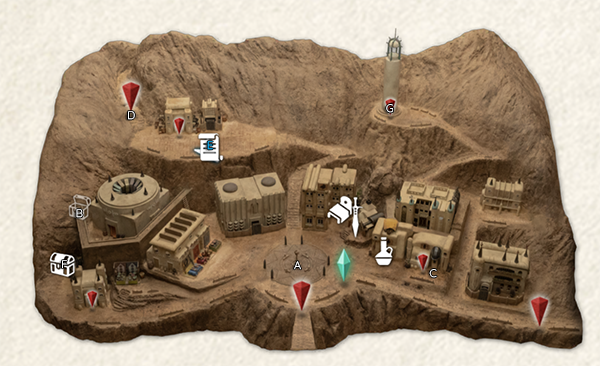 A short cutscene will follow as you head towards the center of En, known as the Public Square (A).

You can find a Potion S by some of the shops on the left side of the Public Square. You can also find 30 G by going up a ladder behind the shops. Along the same wall, there is a chest (B) that will give you an Iron Bangle, which you should equip to Leo to replace his Normal Vest.

En is home to several areas that are worth visiting.

As you head to the right of En, an NPC named Sid will automatically talk to you. You'll enter Starry Eyes [Bar] (C) and learn more about why you were in the Thaumatech Factory. Follow Sid to a backroom and he'll reveal where you keep your loot after your adventures called The Mini Toybox.

Inside The Mini Toybox you will be given a chance to explore. Go to the left and pull the rope to open up a cupboard to receive a Ruby S Jewel. Equip it to Leo to increase your attack power.

You also can open up a locked chest by using a passcode. Make sure you read the notes nearby to reveal a specific date. If you choose the wrong option, you will fall into a pit and have to fight some Ice Puppets. 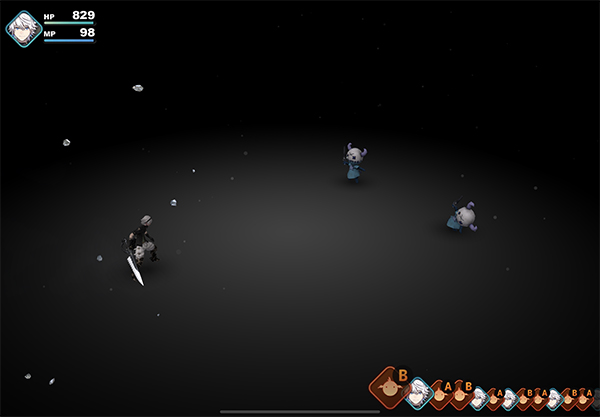 Once you have done that, select 1014 to reveal the treasure and obtain Mysterious Mask. Inside this chest is also a Lever, but none of the options reveal anything so far.

On the floor is an Unknown Machine that Leo doesn't recognize. Once you pick it up a new cutscene will occur in which you start to remember a girl. Sid tells you to go find her in the Fortune-Teller's shop in the En - Old District.

Head back to the Public Square (A) and up the middle path. You can find a Potion S from one of the barrels next to the two houses on the hill. Enter the house on the left to claim the Potion S from the shelf, the Antidote from the Cooking Pot and the Heal Stone from the Treasure Chest.

Here you can encounter random battles again, so have your wits about you. The area has three new enemies: Dark Squeaker, Geo and Giant Avaris.

Giant Avaris have only 180 HP, so take that enemy out first. Geo has a massive 810 HP, so I hope you have purchased your Long Sword! Make sure you're using Slash to hit multiple enemies at once. Don't worry too much about consuming MP; these mobs drop lots of Ether S to make up for it. 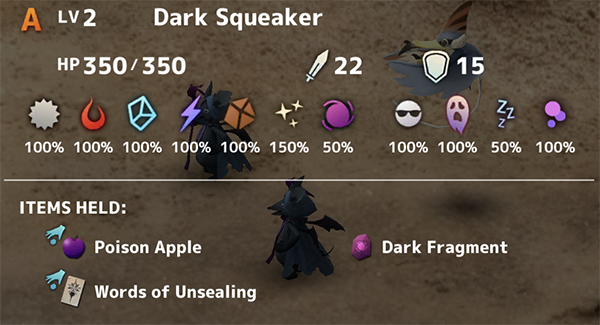 You can find 3 Fire Fragments from a Treasure Chest at the Mountain Path and a Potion S from a bucket of water.

Head forward to the end of the Mountain Path to reach En - Old District. 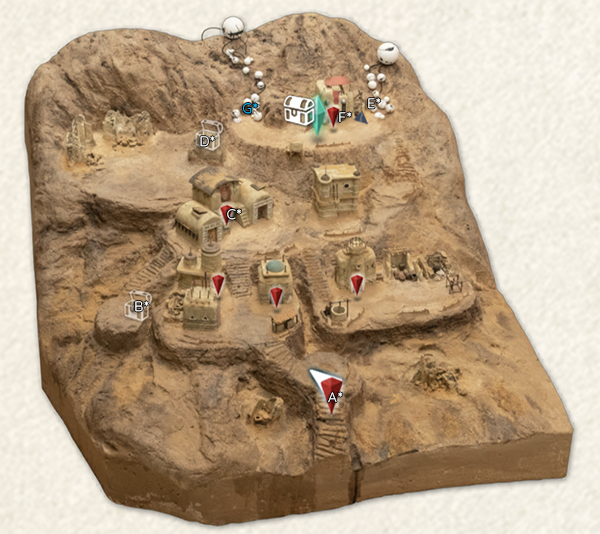 En - Old District is a deserted area that was ravaged by the Mechteria Malevolent God. This area still has random battles so make sure you heal up.

Enter the leftmost Residence building to find a Potion S on the counter. If you head up the path and round to the left, you will find a treasure chest (B*) containing 800 G.

At the top of En - Old District is a large Residence building (C*). Go inside to claim a Potion S by the barrel and Ltng Fragment from the Treasure Chest. Behind the building is another Treasure Chest (D*) with an Ether S inside and 120 G by one of the broken walls to the left.

Head across the bridge by the well to pick up 200 G from a nearby box of goods. You can go down the Well to claim a Potion S. In the same area, head inside the Residence to open a treasure chest containing a Heal Stone. You can also find a Potion S from the Fish and the ceramic pot contains 100 G too!

Keep going further up and you'll come across Mechteria (E*). This poisonous stuff will deal damage to you if you ge too close to it so keep away! If you head down the well, you'll get to claim 200 G.

Use the save point to save by Owen's Shop (F*). This is the Fortune Telling place you've been searching for!

Inside you'll meet Kina, who seems to remember you. She'll run off into the bedroom, so follow her. There is a locked treasure chest, but since you don't have any Iron keys, you'll have to leave it for now. Speak to Kina to watch Memories of the Encounter cutscene.

It turns out Kina saved you in a mysterious forest. At the end of the cutscene you'll obtain Leo's Memory Memories of the Encounter, which allow you to read them in the Story section from the Camp Menu.

Head back to Owen's shop front and have Owen read your fortune. The scoundrel wants you to pay him - and you don't have enough! Leave Owen's shop to start a new cutscene. Looks like you need to head back to En - New District.

You'll notice a new type of Treasure Chest (contains Amber M) next to Owen's shop that can only be unlocked with a Mechteria Key, which you do not have.

As you head back to down through Old District, Kina will interrupt you with her backstory. Eventually, you'll both get attacked by several Giant Avaris.

Kina joins your party and you learn to use her magic that can be bent to attack multiple enemies at once. Cool!

Carry on heading back to the New District.

When you arrive back in the New District, you will unlock Fantasian Quests. Speak to the Sick Mother (E) to begin the quest.

Your first quest is to find the lost boy of a mother who is worried about him. This means heading straight back to En - Old District. 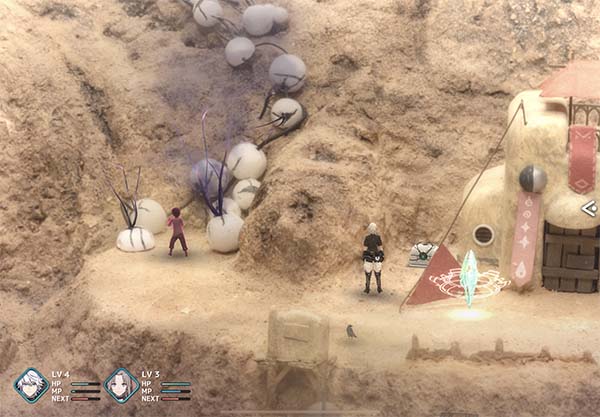 Once you found the boy, select the following options:

Head back to En - New District and talk to the mother to get your reward.

Now that you have an Iron Key, you can open up a locked chest! You can use it on the very first Locked Chest (F) you find to get a Knight Sword! Equip it to Leo for that boosted Attack power and a new Pierced ability (your attack will go through enemies to hit more mobs).

Head to Public Square (A) in New District to initiate a cutscene. Kina wants you to head towards a tower, better do as she says! Head towards Starry Eyes [Bar] (C) and walk up the road on it's right. Heal up because you're about to take on a new boss.

Follow the road and this will take you towards the tower (G) where a new cutscene will happen. 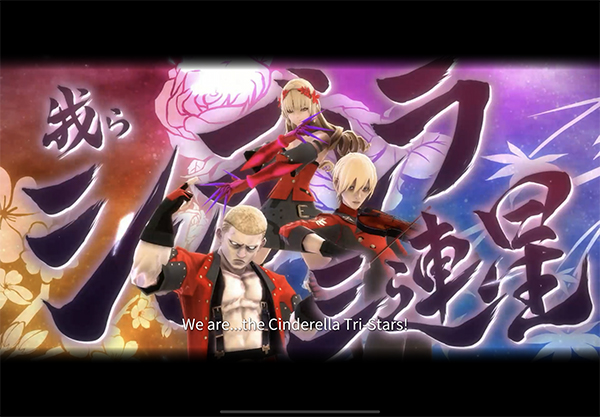 You'll be thrown into a fight with the Cinderella Tri-Stars. You won't be able to hit any of them until Dotty lower's his guard. When that happens, have Leo use Slash and Kina use Holy to hit all three at once. Folt can heal the others, but apart from that, not a lot to worry about. I have a feeling we'll be seeing these again soon!

After the fight is over, Leo will pick up a Cinderella Badge.

On floor 2F is a Treasure Chest containing 500 G. On floor 4F there is an Ether S hidden under the stairs.

Once you reach the top of the tower, Kina tells you about some magical money you can earn in a forest. You'll be given the option to leave town, which teleports you back to the Public Square in New District. Save the game and buy any potions you may need for your travels.

You can also use your other Iron Key to unlock the locked chest back in En - Old District, inside the Owen's Shop (F*) bedroom. This will give you an Elixir.

That wraps up part 2 of the Fantasian Walkthrough!