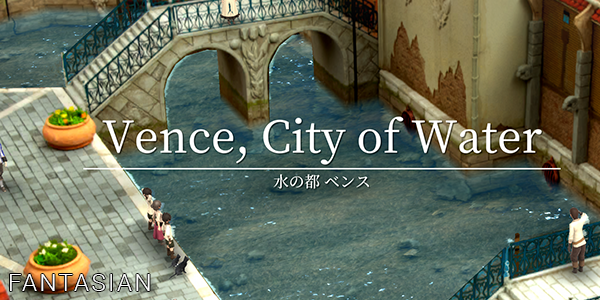 After a quick cutscene in the Uzra - Infirmary, you’re now free to explore Vence - a city built on water in this part of the Fantasian Walkthrough! 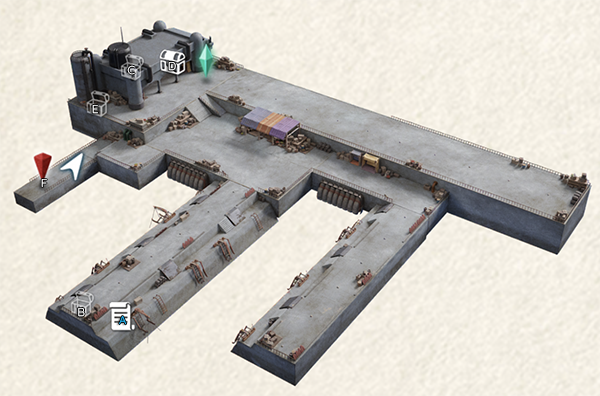 If you open your mini-map, the first thing you’ll notice is a new quest: Bait For Fishing (A). Head to the man who is having trouble fishing and after accepting the quest, collect the Brave Guard from the Treasure Chest (B) at the end of the pier.

There is another Treasure Chest (C) with 3x Phoenix Feather just beyond the Save Point. There is also a Locked Mechteria Chest (D) (contains Elixir) that you cannot open yet. You'll be getting some Mechteria Keys soon so make sure you remember to come back here.

Finally follow around the same building to the left and pick up the Heal Stone from the Treasure Chest (E). 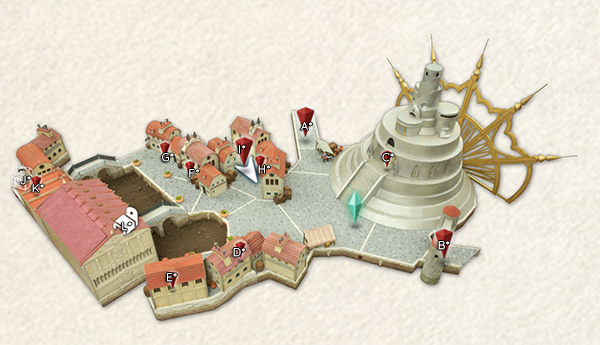 After a short cutscene in which Cheryl gets spotted, you can explore Vence some more. Head right once you reach the canal. Enter the first Residence house (D*) with the bell over it’s door. Inside you’ll find a Treasure Chest with x10 Ice Fragments and a Potion S on the table.

Next go further right to the next house (E*). You pick up a Protein Drink from packages on the shelf in front of you. The Treasure Chest also has an Amber S inside it. The bookshelves has a Glue item.

Head to Sandview [Inn] (L*) next and pick up the 5 G from the fountain. Head back outside and past the bridge to the two houses on your left. Enter the first house (F*) and by the barrels you can pick up a Poison Apple and a Heal Stone from the Treasure Chest on the left.

Ignore the house G* for now. There will be a quest available here soon.

Head across the bridge and you’ll see two men hovering over a Treasure Chest (J*). Speak to them three times and they’ll eventually let you open it for a Rutile Quartz. Now enter the house in front of them and grab the Phoenix Feather on the table. On the right hand side are two Treasure Chests containing 5x Potion S and Ether S x3.

Make your way back to the center and towards West Vence (I*). Before you go, enter the Residence house (H*) and pick up the Energy Drink from the chest of draws. Pick up the Ether S from the barrels outside. 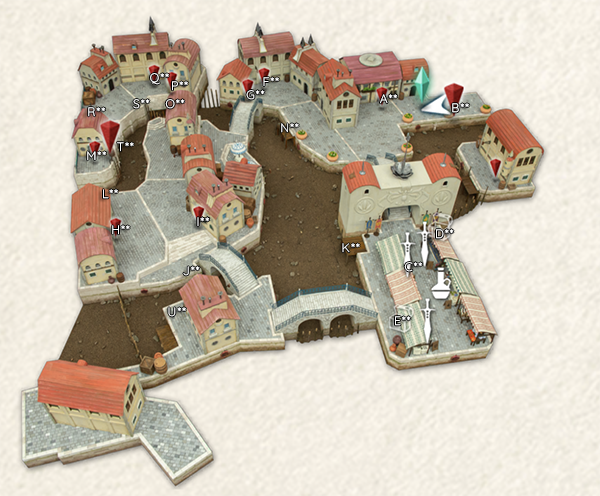 Walk slightly forward and a cutscene will present itself. Follow the man into Innocent Eyes [ Bar] (A**) and talk to the barman.

As it turns out, Sid has a brother named Cas. Cas recommends going to East Vence - Deserted Area. Before you do, unlock the Treasure Chest behind him with an Iron Key to get Heal Stone x3.

Before heading East Vence - Deserted Area, go across the bridge towards the Vence market (C**). Here you can buy a Witch Staff for Kina and a Platinum Ring for Cheryl. There is also a Treasure Chest (D**) nearby that has a Rock Hammer and another (E**) behind the stalls that contains Clock Of Truth x3.

Now go back to Central Vence (B**) and speak to the guards at the entrance to East Vence - Deserted Area (B*). After a short cutscene, you need to go find the Mayor. He’s at City Hall (C*).

Head up to the City Hall building and claim an Antidote and Poison Apple from the benches. Now speak to the Mayor. He will let you now pass to East Vence - Deserted Area (B*). He recommends first going to West Vence and talking to a lady about getting a Gondola.

Speak to the lady at the Fruit Stall in Vence - West (C**) (near where you buy weapons and items from). She will give you a Vence Residence Key to help yourself to one of her gondolors when you reach her house in East Vence - Deserted Area (B*).

Now head back to Central Vence (B**) and then out to East Vence - Deserted Area (B*). 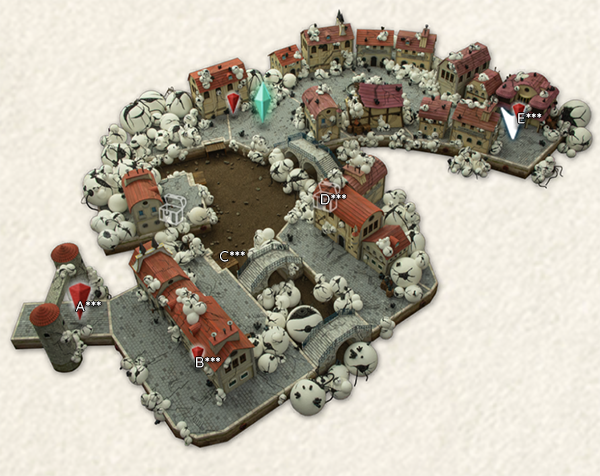 The Key Orblings hear drop Mechteria Keys that open locked chests. You’re should grind here for a little while to get some keys.

Once inside East Vence - Deserted Area, enter the first house (B***) on your right. This is the Fruit Vendor’s house where you can pick up your Gondolor.

Grab the Ether S x2 from the Treasure Chest and then go and claim the Gondolor. 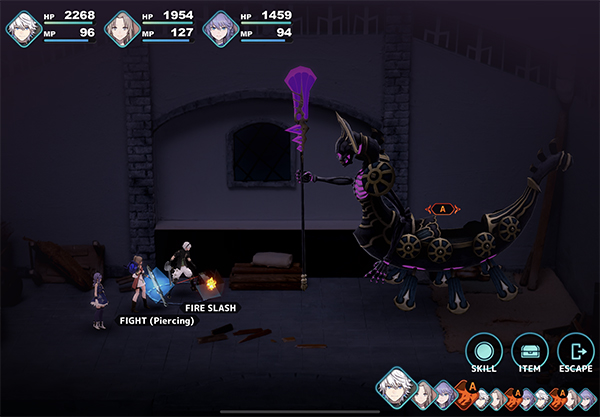 The Gondolan can use Barrier. When he uses this, you need to use Leo’s Samidare skill to destroy it.

He has a strong Wipe Out skill also that will hit everyone for around 700 HP. Make sure Kina is on healing duty and have Leo’s First Aid used when low on health.

After the battle you’ll get your Gondolor. Head back outside and follow the path across the bridges towards the Canal Dock (C***). On your way you can pick up a Mechteria Core from floor loot.

Once you arrive at the Canal Dock, you can use your Gondolor to sail across the water. First head to the dock with the Locked Treasure Chest, open it with an Iron Key to get an Elixir. Collect the Potion S whilst you’re there from the floor.

Back on the Gondolor and reach the otherwise of East Vence - Deserted Area. You’ll see a Save Point up ahead. Use it and heal up. There is a Potion L inside the Residence House to your left. Pick up the 500 G on the floor by the bridge and cross it to find a Treasure Chest (D***) containing a Snow Quartz.

Equip the Snow Quartz for the upcoming battle as it protects against petrification.

Head back to the save point and up towards the fountain.

The blob starts off with hitting you with a single swipe that deals almost 1k damage.

Try to only kill 2 of the four Mecha Jellyfish he spawns. When all four are killed, he’ll use Divide to generate more of them. They are weak to Kina’s Holy Spell and it’s easier to hit 2 of them with it.

At some point he’ll use Foul Breath which can Petrify the player he hits. The Snow Quartz offers resistance to this or you can use Kina’s Cure skill.

The Mechteria Blob also has Ground Break up his sleeve, which deals devastating damage to all three members. When this occurs, make sure you heal up using both Leo’s First Aid and Kina’s Heal.

That wraps up this part of the Fantasian Walkthrough! Next stop is the Midi Toy Box!