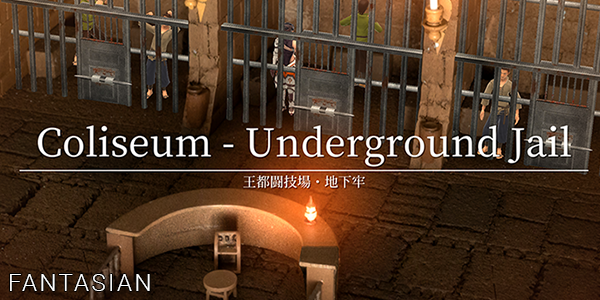 After the incidents in the Machine Realm, you’re back with Leo in West Vence marketplace. Before you begin your next adventure, you can buy a new Enhanced Sword from the Tidal Wave [Weapon Shop] vendor.

Your next top is to head to the Uzra to talk to the Captain Zinirk. You can warp directly to his room and as soon as you enter a new cutscene will start.

Somehow looking at the magazine feature of Cheryl allows you to teleport to her bedroom.

Use the Warp Device to warp to Vibra Royal Castle - Cheryl’s Bedroom. After a rather bizarre cutscene, you end up in the Coliseum - Royal Jail.

The guy in green let’s you buy items, including a Tanzanite that gives HP every turn. It’s not super useful, but it’s a new item.

Speak to Captain Zinikr a couple of times to start a new cutscene. Looks like you’ve got to fight for your freedom in a tournament. Speak to Zinikr to start the tournament.

As soon as it starts, you need to fight all the different opponents in the arena. Start with the green goblins at the top of your screen. Pick one side to take out first, otherwise you have to fight all the mobs at once.

Next up is a couple of Wolzas and a goblin. After, when you move to the centre you’ll notice a boy running away. Head up top, past the giant winged beast, to take on the knights and bandits.

To the right is a giant Zoragan to fight. After you defeat it a new cutscene will happen. Head back to the centre for another battle with some bandits. Afterwards, heal up because you’re going to take on a boss.

Head left towards where you started and you should see the kid again.

The little kid summons a Minotaurus to fight you.

Get Leo and Zinirk to use Helm Bash and Blade Break to debuff him.

During the fight the kid will cast buffs on the monster and attack you for small damage.

The Minotaurus will use Wipe Out which hits both of you for pretty high damage.

His Intimidate move will debuff your damage and make you lose a turn.

The Minotaurus can also use Stance Of Desperation when his HP is low.

After you dispatch the boss, the kid will put some sleep trance on you and tell you a sob story.

After the fight, you all end up back in jail due to the kid using a disqualified item. Go figure.

The kid reveals his name is Ez. Talk to the guard outside the cell - he will get distracted by something. Then speak to Ez.

Ez will unlock the cell door and join your party.

Once out of your cell, you can free the other prisoners for various benefits. The first guy says to meet him at the Inn in the Royal Captial - Town Center (he will give you 2x Elixir). Move along to your left and a new cutscene will start where there is a giant hole in the ground for you to escape in.

Open the Treasure Chest beside the one Ez opened to get a Potion L. Head back to the hole in the ground and jump through it. 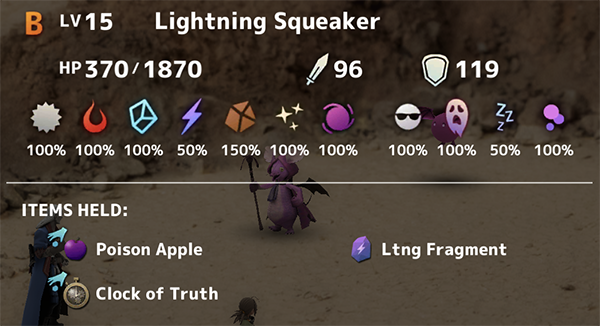 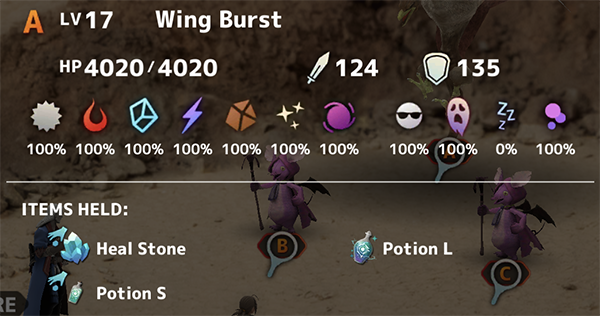 Keep following the path upwards until you get to the top. On your left, have Leo slide alongside the wall to get to a Treasure Chest with a Amethyst M inside. Now head to Ancient Mountain Path - Valley. 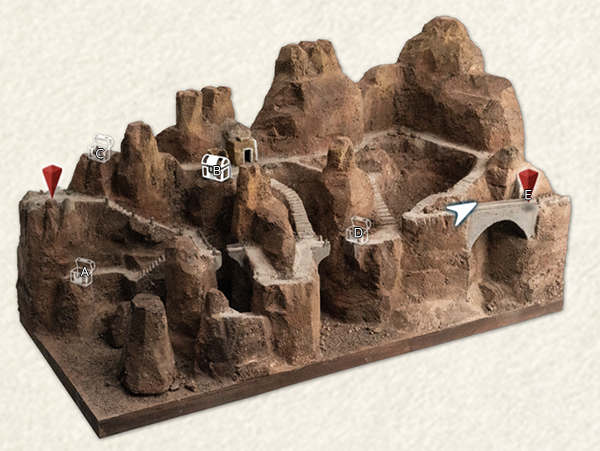 As you enter the Valley, head down the first staircase you see and open the Treasure Chest (A)containing Hard Shell x5.

Head back up and jump over the ledge. Follow the path round until you come to two small buildings. Inside one of them is a Machine Treasure Chest (B) which you cannot open yet. If you head left you’ll find a Treasure chest (C) containing 10,000 G.

On your right is a Treasure Chest containing a Potion L. Head to the Save Point and heal up. 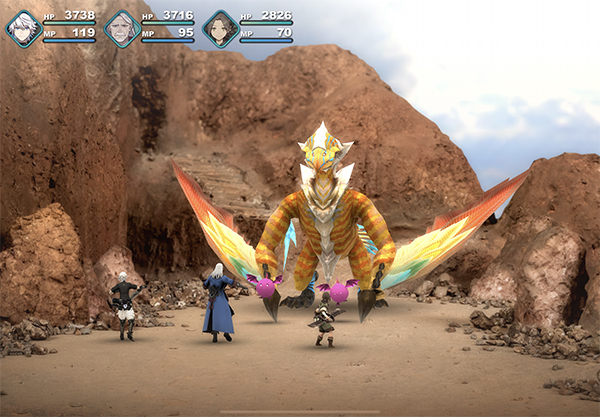 The Lyranodon uses lightning to charge it’s main powerful attack Lightning Storm. The attack will also knock your whole party to the edge of a cliff; if you take four hits, your game will end. So the trick is to prevent him charging his main attack.

You do this by using Captain Zinikr’s Taunt skill. This will cause the Lightning Orbs to focus their attacks on him, rather than using their Lightning to charge the Lyranodon’s attack.

If you do get hit with the Lightning Storm, you can use Ez’s All Potion S to heal everyone effectively. Make sure to use Leo’s Helm Bash to lower the boss’s defence.

Lyranodon uses Strange Voice to knock out any buffs you might have and also lower your attack, so it’s not really worth using Ez’s buff skills.

In between using Taunt, you can also use Zinikr’s Earth Strike to deal hefty damage.

After the battle, head down the stairs Vibra - Outskirts.