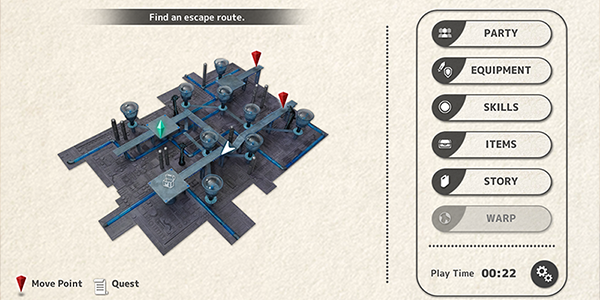 Welcome to the beginning guide of Fantasian! Strap yourself in as your in for a thrilling, exciting and emotional ride that all great classic JRPGs provide!

After watching an interesting cutscene in which you appear to be blowing something up (remind you of another game?), you find yourself in the lower level of the Thaumatech Factory. 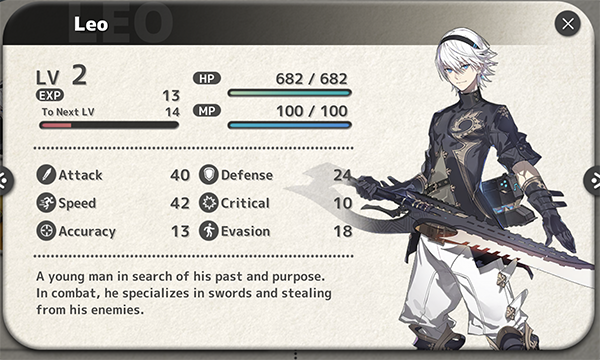 Introducing Leo, who seems to have hit his head and lost most of his memory.

As with all JRPGs, the beginning has a few tutorials to help you understand the mechanics of the game, which slowly get more and more complicated. First up is the Battle Tutorial, where you'll be fighting a couple of Robo guards and Guardrones. 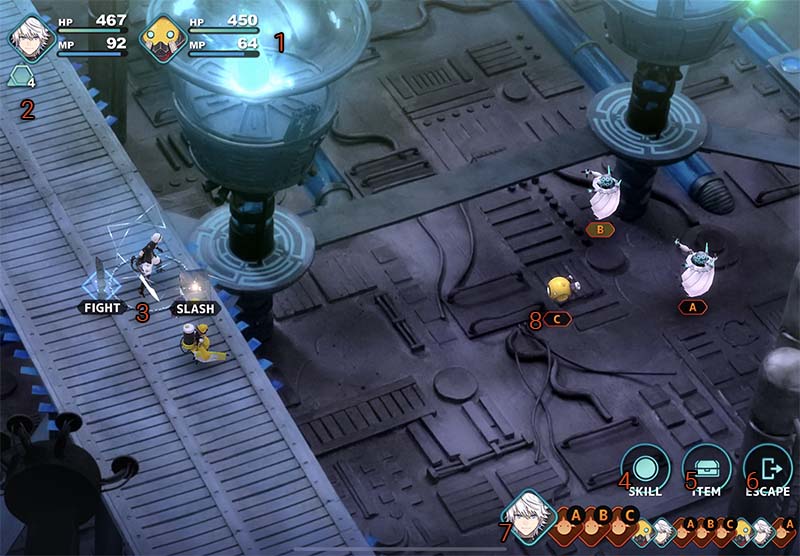 As you learn more skills, you'll have the ability to use your finger to drag and target multiple enemies.

Leo starts off with two abilities: Fight and Slash. Slash can hit multiple enemies if you line up his attack correctly. The little robot friend in your party provides you with a Barrier as soon as the battle starts, which can take several enemy hits for you. You can recast it too. 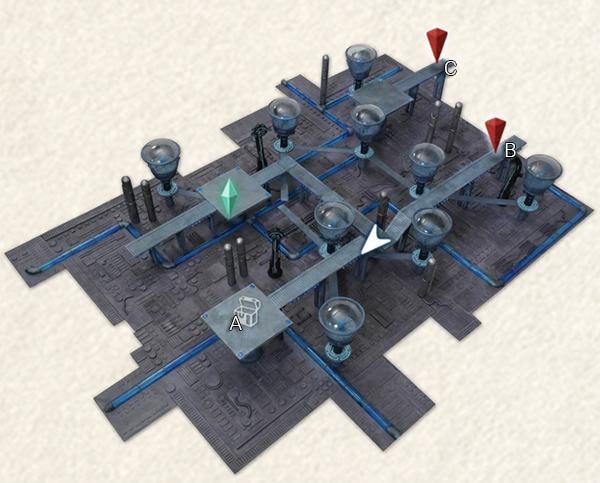 In this zone, there is a treasure chest (A) if you follow the path to the right. Open it to receive a Potion S.

There are random battles as you move around. Enemies in this area include Robo Guards and Guardrones, both are easy enough to defeat. Use Leo's Slash Skill to take out two mobs at once. 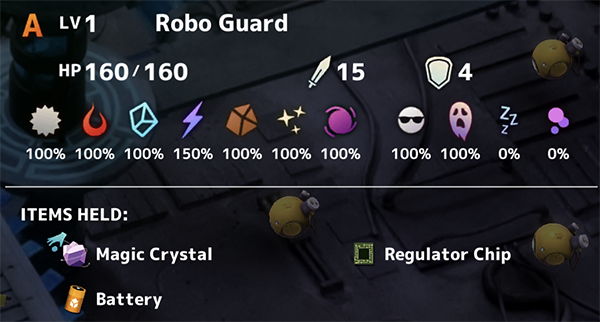 Head towards the Move Point (B) to enter Thaumatech Factory - Center. 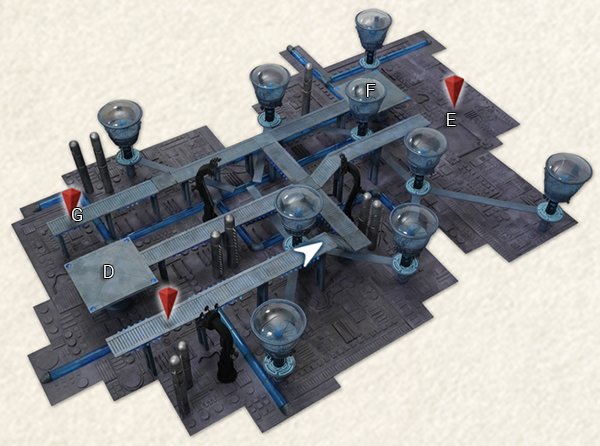 Follow the path along, and you find out some more information to where you are. Apparently you've just blown up something and lost your memory.

You now get access to the Camp Menu. This is where you can manage your party, items and more.

Head to the middle platform to grab the chest (D), contains Phoenix Feather.

To get out of the Thaumatech Factory, you need to use the elevator in the middle platform at the end of the zone (E). To do this, turn on the power, which can be done on the left platform (F).

Unfortunately, as you make your way back to the elevator, your path is blocked by an explosion.

You'll need to follow the path back to Thaumatech Factory - Energy Tanks (G). Here you'll find a giant crane that your robot buddy will hack for you. You'll then need to jump off with exquisite timing, otherwise you're toast!

You'll be back where you started now. Use the save point. Now head back to Thaumatech Factory - Center and head towards the elevator that you can now access (E). 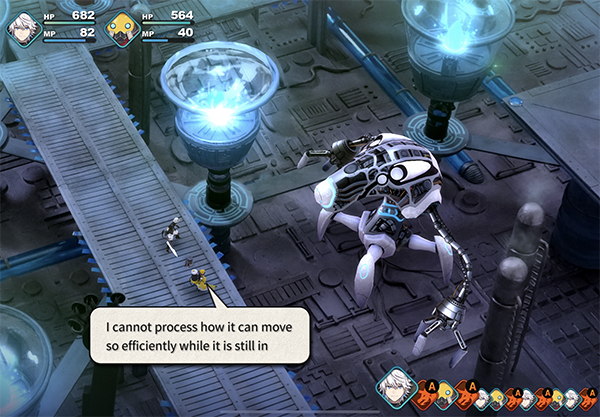 Your first boss fight! Start by making sure all your characters have Barrier. You can use Leo's Analyse skill to reveal more information about the boss.

The Robo Organiser will charge up his attack. He uses Fire Laser twice which will destroy any Barriers you have and the second hit will deal a hefty amount of damage. Luckily, it will also overheat the boss and give you time to heal up and reapply Barriers.

Once you get the Robo Organiser down to around 2,000 HP, you will then be instructed to smash down a nearby energy tower. Attack it using Leo's Fight ability. It will end the fight and deal 5,000 HP to Robo Organiser!

Now that your first boss fight is down, a cutscene will play out where you use the Elevator to escape. 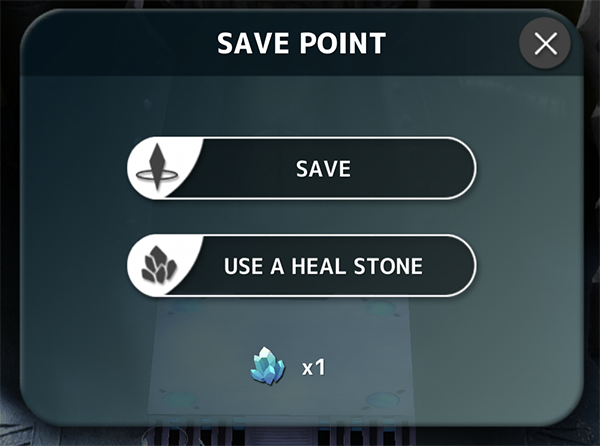 You now get introduced to Heal Stones, which when used at a save point will heal the entire party. You might as well use it now, as there's a surprise coming… 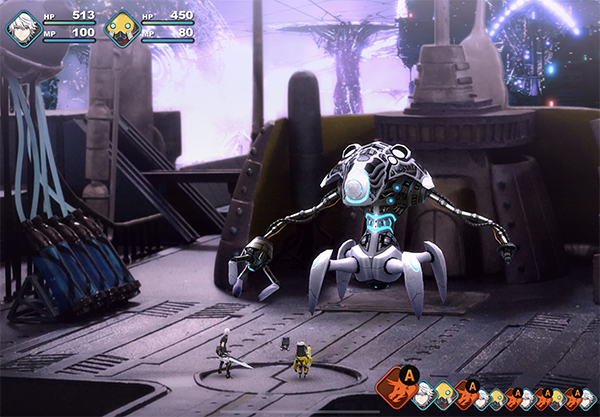 This time the boss only has one of it's arms working, so you can dodge the Fire Laser completely by making sure both characters have Barrier up.

Pummel away at the boss by using Fight skill of both characters. When the boss prepares to use Fire Laser, have both characters up with Barrier to protect against it. The boss will use a general claw attack from time to time, so it's best to always have Barrier activated as much as possible.

When the boss's HP goes below 2,000, it will begin to change modes to overheat mode, which allows the boss's attacks to be a lot stronger.

The boss will use a new attack called Combination Strike, which deals two melee hits and can also start the charge of it's Fire Laser. Use the Robot to use Barrier at all times, and if need be, use a Potion S from your items to keep up HP.

A cutscene will follow, and that wraps up chapter 1 of this walkthrough of Fantasian!